Everyone’s very familiar with this deck, and it exists without Narset, so it’s not really what I’m talking about, but I wanted to acknowledge that it exists and that it could use Narset well. Now let’s get a little more creative:

The goal of this deck is to get five artifacts onto the battlefield, which is most easily accomplished by transforming Treasure Map or triggering Sai, Master Thopterist. Then use Ignite the Beacon to find Tezzeret, Master of the Bridge and Karn, the Great Creator. Then you cast Tezzeret, which allows you to cast Karn for free, which can get a free Guardians of Koilos from your sideboard, which allows you to pick up Karn and do it again to get all your Guardians of Koilos. If at that point four 4/4 creatures aren’t enough, you can use them to pick each other up to infinitely trigger Sai, Master Thopterist or Kiora, Behemoth Beckoner if you control either of those, and if you don’t, you can still finish off by grabbing Meteor Golem, which you now have enough artifacts to cast for free thanks to the Guardians of Koilos you’ve played.

If you don’t control five artifacts, you can simply use Ignite the Beacon for value finding whichever planeswalkers are best – by default, that would be Teferi, Hero of Dominaria and Ugin, the Ineffable. 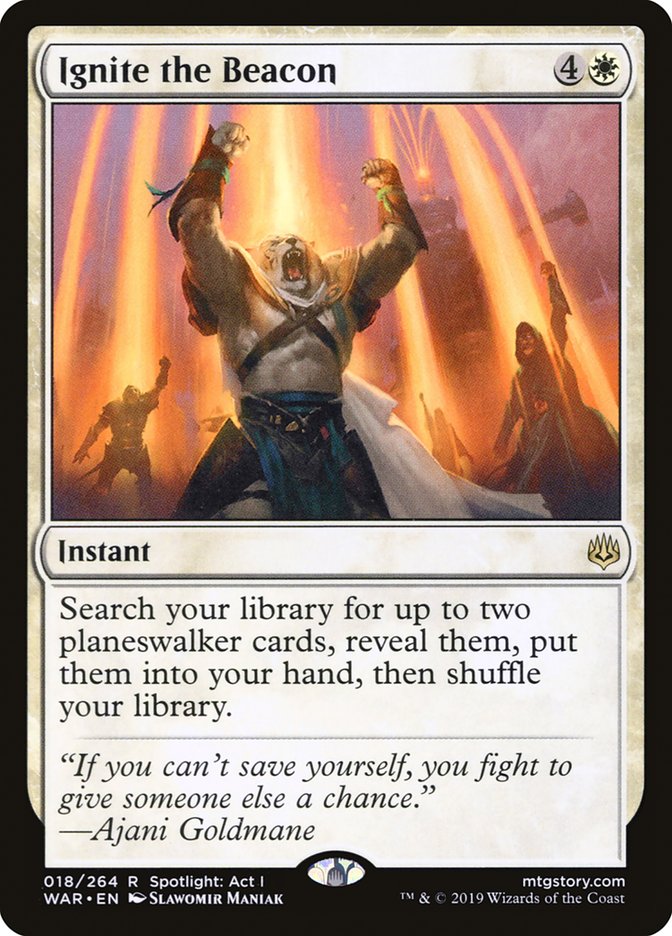 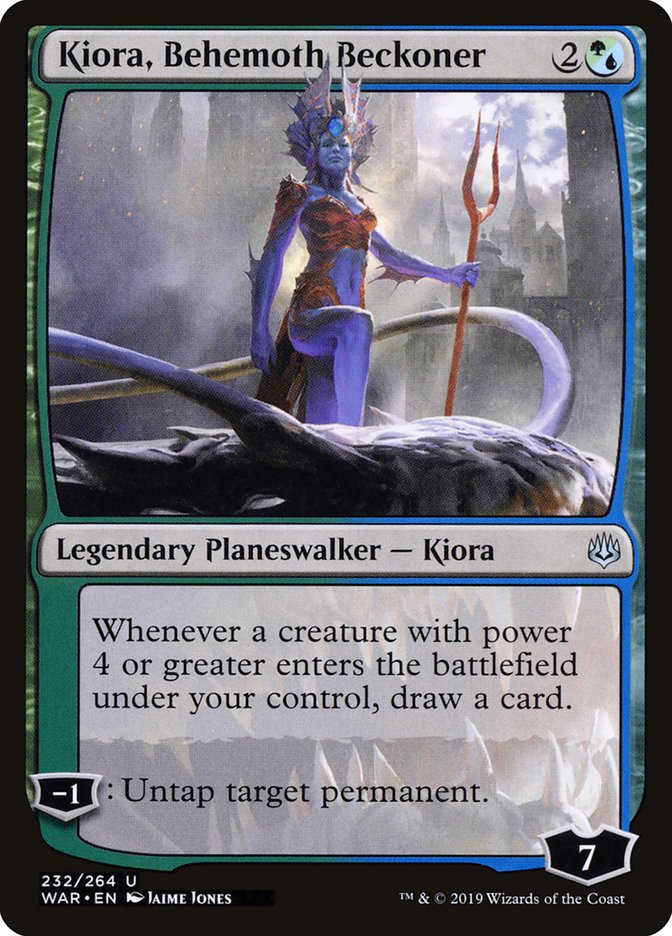 Kiora plays remarkably well in this deck, considering it has zero four-power creatures. The curve of Treasure Map into Kiora allows you to immediately untap a land to activate Treasure Map, and then on the following turn you can untap the Treasure Map with Kiora to activate it a second time and transform it on Turn 4.

Teferi, Time Raveler makes it so that, from the point when you Ignite the Beacon at the end of your opponent’s turn until you’ve finished going off, your opponent can’t do anything about it. It also has the ability to bounce Fblthp, the Lost or Guild Globe to draw extra cards if your opponent isn’t presenting relevant permanents, and it can also generate an extra mana by bouncing Mox Amber. 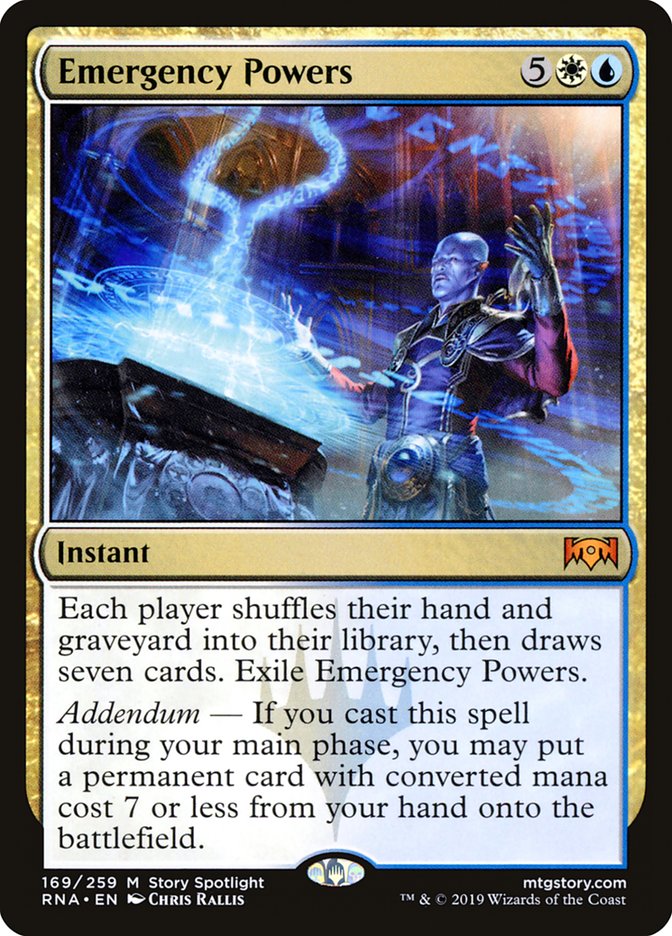 Emergency Powers exists as a backup plan to find with Narset. Since the deck can easily make a lot of mana thanks to Treasure Map and is looking to control Narset anyway, it seemed too easy and valuable to include not to have any. Some of the sideboard is taken up with cards for Karn to find, and the rest is normal Azorius sideboard cards.

Another option is to use a similar idea of blue planeswalkers and Mox Amber to ramp, but to skip the artifacts necessary to enable Tezzeret and focus on a different end-game, for example:

This deck uses Llanowar Elves and Mox Amber to cast planeswalkers as soon as possible. Then it uses Kiora for additional ramp to cast Gilded Lotus, and then to untap Gilded Lotus. Saheeli can also turn Servos into Gilded Lotus for even more mana and Nissa provides another big mana jump. All this mana is used to fuel a loop between Tamiyo, Collector of Tales and Planewide Celebration. Tamiyo can return Planewide Celebration, which can return Tamiyo and other things, like Jace, Wielder of Mysteries and Teferi, Hero of Dominaria, and of course, it can also proliferate onto those two and your other planeswalkers, allowing you to win the game with a Jace ultimate, exile your opponent’s permanents with a Teferi ultimate, or attack with huge lands animated by Nissa or simply an army of Saheeli’s Servos or Planewide Celebration Citizens. 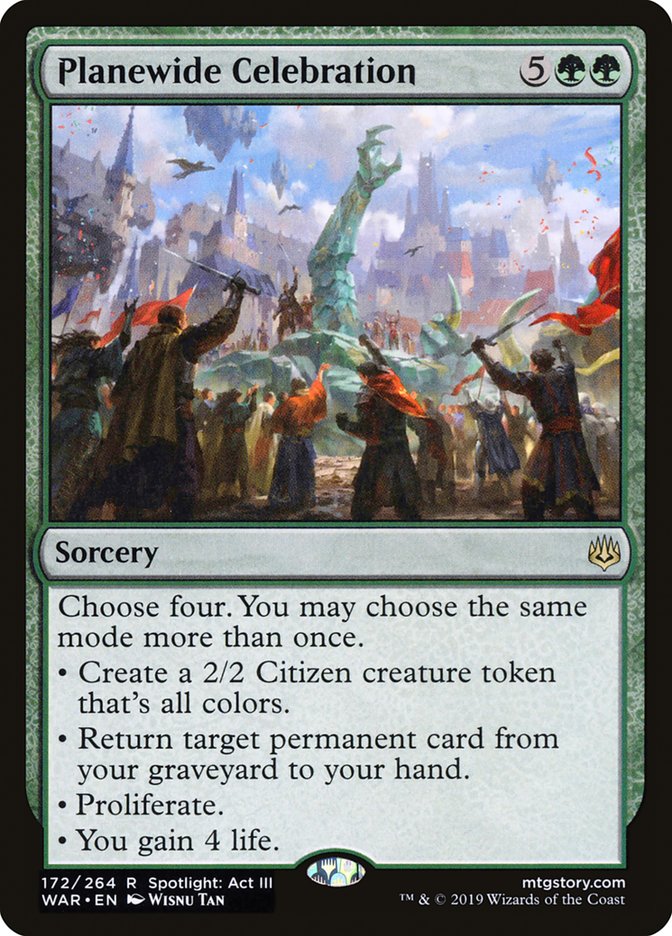 Four is a lot of Planewide Celebrations, but it’s important to be able to name them with Tamiyo, Collector of Tales (the other commonly named card is Root Snare), so I wanted the greatest chance of hitting. Additionally, the deck is very focused on ramping and I think it’s just a powerful effect for seven mana, so that shouldn’t be a problem.

With sixteen maindeck planeswalkers, this deck is possibly better at losing to The Elderspell than it is at anything else, so you’ll want to be very careful to make sure that that card isn’t seeing heavy play before playing this deck.

Another possibility is to focus more directly on abusing Narset’s static ability with Emergency Powers. @elliothas on Twitter suggested the following:

@arenadecklists Been climbing Diamond at a high enough clip that I think this deck might have some legs. Some neat tricks: Narset + Powers/Amnesia. Teferi bounce amnesia to redo; blast zone blow up amnesia on self to draw, draw step powers + narset https://t.co/cxqFXbzQMN pic.twitter.com/EqUdo4wXee

This deck has both Induced Amnesia and Emergency Powers to attack your opponent’s hand if you control Narset – how often do you see an Azorius discard deck? – as well as the ability to blow up your own Induced Amnesia on yourself with Blast Zone to draw some cards. Smothering Tithe gives you a lot of Treasures if you cast Emergency Powers, and those eventually fuel a huge Finale of Glory, which can also be cast for smaller numbers to protect your planeswalkers (and leads to sweet ambushes with Teferi, Time Raveler thanks to Teferi’s +1 ability).

Outside of that, it plays a normal Azorius control game.

Smothering Tithe and Narset work at cross purposes, but really they’re just supplemental cards to make sure you have something that combos well with Emergency Powers or Induced Amnesia. One option I wonder about adding is God-Pharaoh’s Statue. This card is weird and not especially strong, but it adds further taxing to supplement Smothering Tithe and Smothering Tithe can ramp it out if they don’t pay immediately. It’s also very strong to put onto the battlefield with Emergency Powers to choke your opponent’s ability to use the cards they’ve drawn if you don’t have Narset on the battlefield. 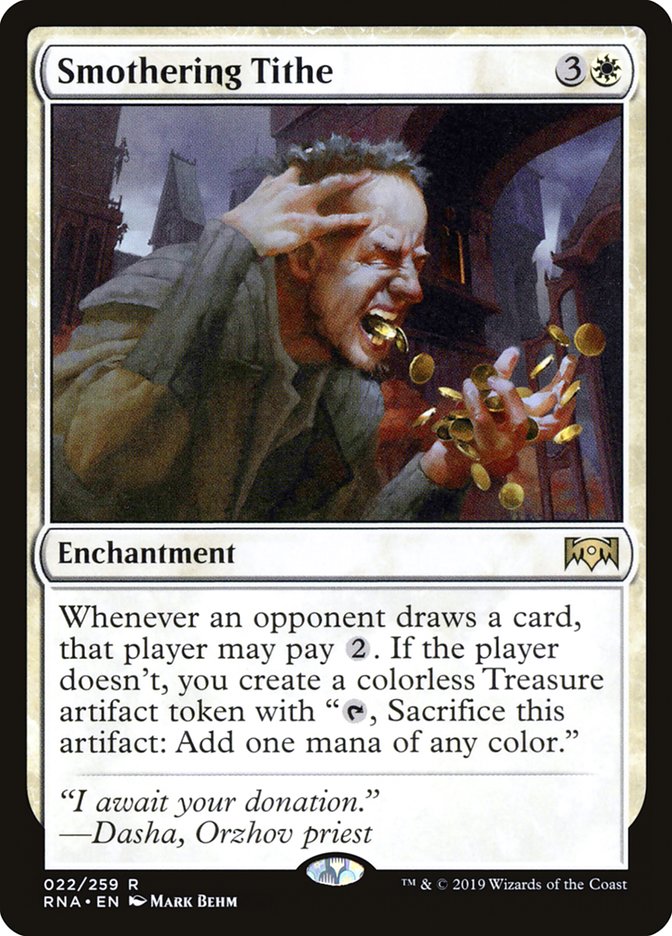 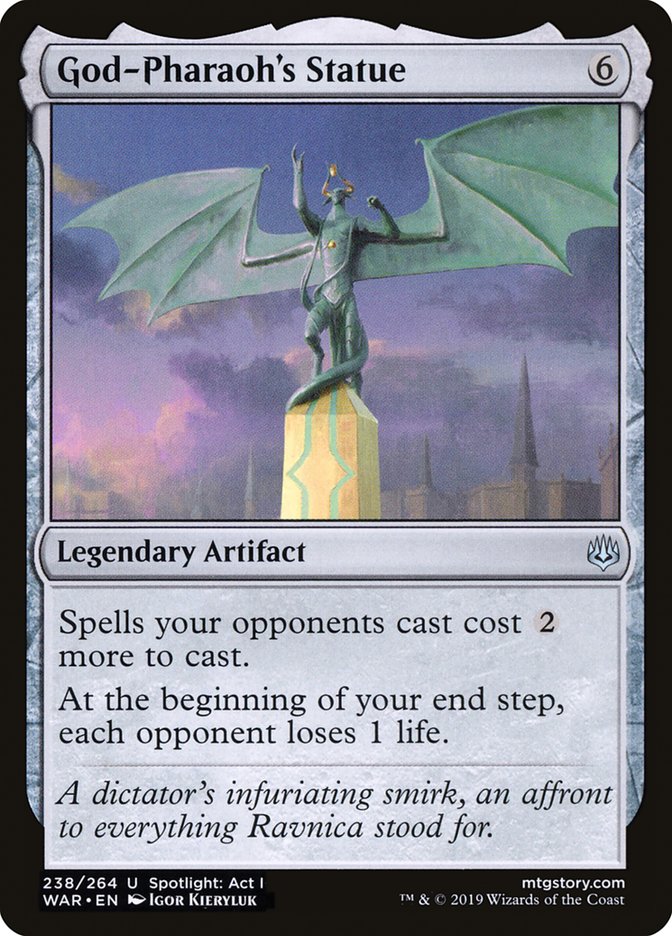 My personal inclination is to move more toward planeswalkers to take advantage of Mox Amber, which is good even in multiples to use as Lotus Petals for casting Emergency Powers:

More planeswalkers and Fblthp allow the inclusion of Mox Amber, which helps with Emergency Powers, as I mentioned, but also helps with casting sweepers on Turn 4 and plays especially well with the sideboard, allowing you to hold up Spell Pierce on Turn 3 after casting a planeswalker or, even better, cast Lyra Dawnbringer on Turn 4 against aggro decks (maybe even Turn 3 off Fblthp and two Mox Amber).

This loses Finale of Glory as a dedicated finisher, but I think leaning on Jace and Teferi should be fine to close out a game.

The key takeaway here is that if you’re trying to assemble any combo of noncreature spells, Narset is a great way to get them together, and when Narset itself is half the combo, that’s even easier. Nicol Bolas, Dragon-God plus The Elderspell? Narset can help with that.

I’m not sure which shells will turn out best, but it’s very likely that Narset, Parter of Veils will be a major player in War of the Spark Standard.