What are the hardest commanders to build around? It has to be those that have such exotic abilities that it is hard to define how to use them, especially in their color. Those are the truly impossible commanders.

Isao is an example of a legendary creature that just doesn’t work well as a commander. But he’s not the worst. After all, he’s still a 2/1 uncounterable bushido 2 guy who self-regenerates for a cheap three mana. He’s not impossible, just odd.

So my first choice for the Impossible Commander Project is someone from Kamigawa block. It doesn’t have a great body or set of abilities to make up for sucking. Plus it has an ability that has little to no support in its color. Can you guess this impossible commander? 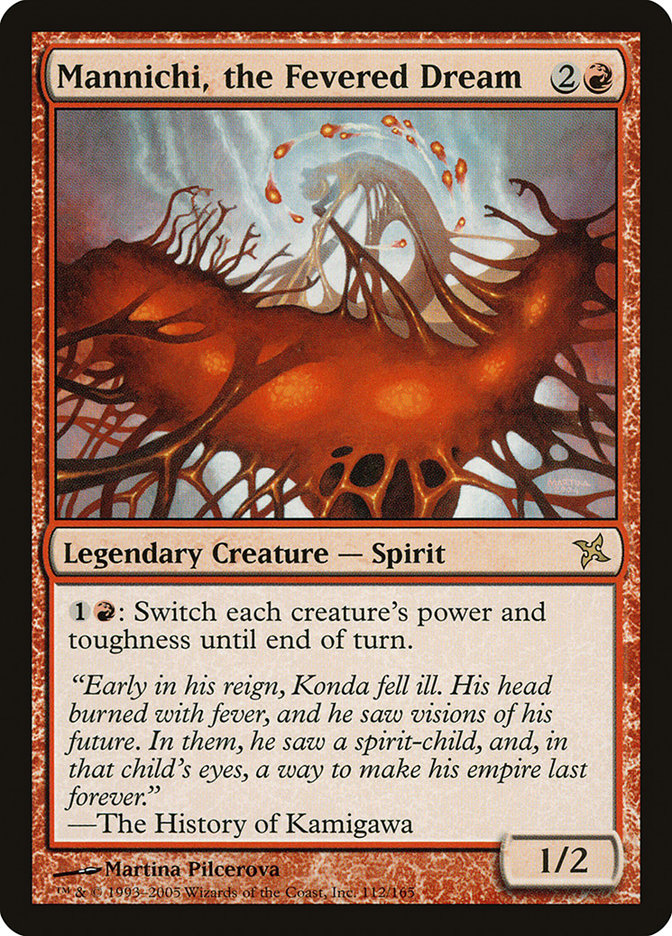 I mean, take a look at how atrocious Mannichi is. First of all, unlike some other contenders, Mannichi is the opposite of a red zone threat. Rocking a 1/2 body for three mana, Mannichi possesses no useful or interesting combat-related abilities. Without these redeeming qualities, you cannot rely on it for aid for anything outside of its ability. So it needs a king of an ability in order to work. But instead of a potent game changer, our good friend just forces you to spend two mana to switch the power and toughness of every creature on the table.

If Mannichi were in the right colors, I could make a pseudo Doran, the Siege Tower deck. For example, white has entrants like Indomitable Ancients and Commander Eesha. Although note that because Mannichi switches power and toughness, it would make creatures like this very fragile—Indomitable Ancients would trade with Grizzly Bears. So a Mannichi deck like that would be weaker than a Doran deck, but it’d work.

When you look around, you’ll note that we aren’t in white. We can’t do similar things in blue or green either. We can’t turn defending dorks into potent houses with the flick of a pair of mana.

And that’s because we’re in red. What does red do? Well, it has a lot of high power/low toughness creatures. So Mannichi can turn a Ball Lightning into a 1/6 trampler. That doesn’t seem to work really well though.

Without the obvious ways to abuse Mannichi in red, what could you do with it? Mannichi is truly an impossible commander, right?

Let’s take a look under the hood of our Mannichi deck!

First of all, we can turn Firebreathing style effects into pumping of the defense with Mannichi, so cards like Enrage or Dragon Whelp can be flipped. I only used that trick a few times here. I could even run Granite Gargoyle as a 2/2 flyer that pumps the front instead. But this effect was kept to a minimum to deal with other fun stuff.

Note that Mannichi will outright kill any creature with a power of zero. That means I’ll flat-out win against commanders like Azami, Lady of Scrolls; Skeleton Ship; and even the aforementioned Doran, the Siege Tower. From Wall of Omens to Birds of Paradise to Forgotten Ancient, it’ll kill a lot of the trash, especially mana dorks and Walls.

So one of the goals of this deck is to reduce a creature’s power to zero and then flip it into death. Again, that would be an awesome Commander deck with Mannichi being blue. Can you imagine turning jank like Dizzy Spell into hard removal? I would be overjoyed at how often I could sweep the table with Meishin, the Mind Cage out.

But again, we’re in red, so we can dip occasionally into artifacts when they do the same. Take a gander at the powerhouse that is Belbe’s Armor. Tap enough mana to shrink a creature’s power down to zero and then swap to kill it. Sounds like repeatable fun! Unfortunately, the other tricks are not as good. Cards like Staff of Zegon may not drop a creature completely, and other options from Magic’s past, such as Weakstone and Bone Flute, hurt me too.

Instead, I grabbed Watchdog and One-Eyed Scarecrow. They both shrink the front a bit in specific situations and add to the deck’s density of creatures.

One more fun card from this era is Kry Shield. It’s bizarre! Take a look at how unusual the card is, and then see if you can unlock some fun Mannichi games with it. My Mannichi deck is like a puzzle.

I also have some power-related goodness. For example, Bloodshot Cyclops will fling a dork at someone when packing a high power. Make a hugely powered dork and fling it at someone’s face (consider Kry Shield).

A quick rules aside on Sentinel. When you activate it and improve its toughness, that change stays with the creature permanently, until morphed again. So if you block Genesis and make it a 1/5, it’ll stay that way. When you switch power/toughness, it happens in the final sublevel, level E. The Sentinel change occurs in sublevel B. What does that mean? It means that you can swap the Sentinel’s 1/5 into a 5/1. (This ruling is brought to you by Gatherer.)

I added the fun Valakut Fireboar, which is kind of both the 6/1 Ball Lighting and the 2/10 Indomitable Ancients. You can ensure that the dial is set to the right station with Mannichi. We have some other cool creatures that will play havoc with the math, like Shivan Dragon, Ydwen Efreet, Dancing Scimitar, Yotian Soldier, and such.

Now consider first strike in this deck. Smash something with a lot of power on the front end early, and then if any opposing dorks survive, you can flip it back to a high defense. This trick works very well with high power and first strike critters like Jeska, Warrior Adept and Wall of Razors. Note that Jeska is downright rude because she’ll also tap to shoot down a creature with one power that was flipped to one toughness. (Although he lacks first strike, big brother Kamahl, Pit Fighter makes up for it by both moving to a 1/6 when needed and shooting down creatures that flipped to X/3 or lower).

Sandstone Warrior seems like a contender for the best creature in a Mannichi deck. You can pump to first strike a blocker, and you can flip to make it survive a blockageddon. Both work incredibly well here.

Another cool trick is Goblin Tunneler, who can make a small creature unblockable and then smash hammer with Valakut Fireboar, Sandstone Warrior, or a flipped guy off Mannichi. Lots of laughs ensue when Dancing Scimitar smashes face for five unblockable damage. (Note that for a high-power, low-toughness guy, you could flip it around, tap the Tunneler, and then switch it back again).

See also: Slagwurm Armor. Or Ensouled Scimitar. Both work rather well. Fireshrieker is downright obscene on a simple unblocked Valakut Fireboar. Oh, did I just hit you for fourteen damage with my janky Mannichi deck? Sorry about that! (We also have Rogue’s Passage and Joven’s Tools for more unblocked fun.)

I love Fireshrieker, Sword of Vengeance, and Surestrike Trident because they give the valuable first strike trick to my nasty boys. Plus the Trident can be tapped and thrown to hit somebody’s face for a lot of damage. It’s like a mana hungry Bloodshot Cyclops that doesn’t require a sacrifice. And don’t forget the haste/trample of the Sword either. (Another rules note: switching happens last. So a creature equipped with a Sword of Vengeance will get +2 to its butt after Mannichi resolves. Keep that it mind, as it could come in very handy.)

We have lots of other fun cards, but space prevents me from discussing too many of them. I do like how No Quarter is downright nasty. When attacked, you can probably play any tricks you need to and ensure that you are blocking with a higher power guy to auto kill the lesser being.

Don’t forget that you can play with triggers. For example, suppose you have out both In the Web of War and Mannichi. You drop Spikeshot Goblin. Normally that means you could tap it to shoot something for three damage. But you want to either attack for four damage or shoot something for four. Just put the Web of War trigger right on the pretty little stack. Then you activate Mannichi. Mannichi resolves, and you have a 2/1 Goblin, which is now a 4/1 with haste. Now you can get in extra damage from the attack/tap ability.

With cards like Island of Wak-Wak, Grab the Reins, and Staff of Nin fleshing out the deck and providing ways to assist Mannichi at the same time, the deck has a lot of built-in synergy.

So that Mannichi fella? Maybe not so impossible after all.

Let me know what you think about our good Mannichi. What commanders would you like to see as the next in the Impossible Commander Project? I have some ideas from a previous Commander article where you gave me some suggestions. What else tickles your fancy?