The biggest tournament ever… this is it!

It seems a simple thing to say, but the fact is that 2227 souls gathered to play Grand Prix: Madrid 2010. This was 266 players more (13.6%) than the previous record, Grand Prix: Paris 2009, and this is a record that will surely be hard to beat. The event will stay in my memory forever, as such numbers are amazing… but more on that later, as there was more about GP: Madrid than the attendance.

The long and hard weekend started on Friday with a brunch with some other judges, as a welcome party of sorts for the Italian invasion of judges who arrived on Spanish shores; obviously other nationalities from all across Europe were represented, and we even had representatives from North and South America. John Alderfer from Pennsylvania, USA, and Alejandro Raggio from Argentina took the massive leap across the Atlantic to join us for this massive and legendary event. Alejandro and John totally rock! 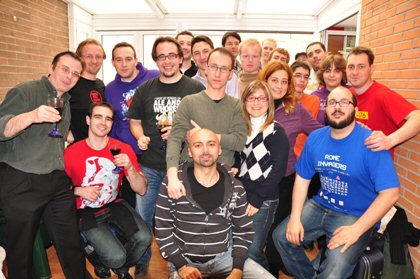 In the evening we moved downtown to the venue. Friday’s customary Judge Meeting was soon followed by a well-established tradition at European GPs: the informal Judge dinner. On such occasions, everyone on staff brings some food or drinks from their country of origin, and we simply remove some tablecloths and table numbers and enjoy the feast. The result is always outstanding, with plenty of delicious samples of each country’s own gastronomical traditions. All-round favorites are Dutch aged cheese and Italian bresaola, but I’ve also heard many compliments from other judges on Spanish chorizo. Make sure you try it if you come to Spain! 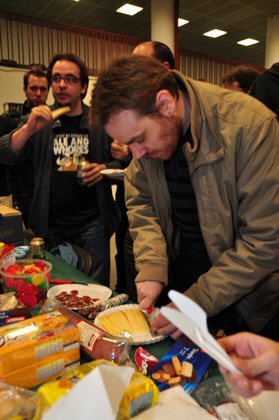 At that point, we already knew the tournament was going to be really huge. Slightly more than 1500 players registered on Friday evening, and the rule of thumb says that at European GPs, 2/3 of the total attendance register on Friday. Well, that would make the final attendance a whooping 2250 players, right?

Jurgen Baert, Andreas Q. Jepsen and Tobias Fjellander crashed at my place, and when the four of us arrived really early on Saturday morning, only the security guys were there! The room was amazingly quiet, unaware of the incoming storm. When registration opened, there was a crowd of nearly 200 waiting outside. One hour later, we had registered those 200 players, and the line snaked all around the park in which the venue is located, and almost went round the building. Registration was open for a combined total of 4Â½ hours, meaning 8.25 people registered per minute on average! 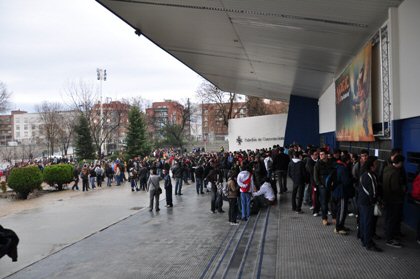 Once we registered everyone, we had the player meeting. At this point, we still didn’t have enough chairs for everyone. Some people had to wait, standing, to deliver their deck lists, but before we had to actually seat all players for round 4, more chairs arrived at the venue, and we managed to fit everybody in. This was the venue’s appearance during the player meeting: 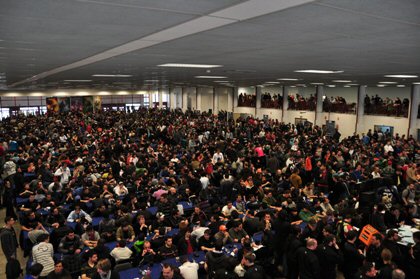 At European GPs, whenever the total number of players is over 800, the tournament is split in two. That means there are two Head Judges, one for each side of the tournament. Since the player attendance skyrocketed over the 2200 mark, and in order to improve tournament operations, it was decided that the GP would still be split into two parts, but now it would have 4 head judges; no doubt about it, what an unique situation. 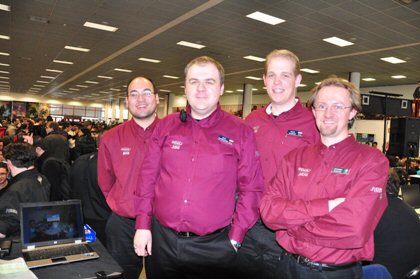 My assignment day 1 was on Papers 1 team on the blue side, with John Alderfer as Team Leader. The first thing we had to do was get the table numbering done. And then redo it. And then redo it again. As the estimate on attendance changed during the morning, the venue floor distribution had to be rearranged to accommodate everybody, and the Papers 2 team, run by Jens Strohaeker, joined us in the daunting task of redistributing table numbers moving around a fully crowded room. After that, we took care of posting pairings. We used the “buddy” system, where two judges are assigned to work together through the day. Nuno Ribeiro was my partner this time. We cruised through the room each round to post pairings, battling against the awaiting player mob. Apparently no one got hurt, though my name tag got lost in the turmoil. Luckily some unknown player returned it to the main stage.

There was an additional responsibility during the weekend for me; the Judge Blog!

This is a communication tool that provides information on what is going on in the tournament from a judge perspective. These blogs are aimed at other judges that are not attending the event, thus providing some sort of coverage on the event focusing on aspects of the tournament that usually are not reflected on the official Wizards coverage. The blog is a demanding task, as you need to not only do your judging – same as everyone else on staff – but also you have to prepare a list of topics and make sure they get covered. As rewarding as it can be, the upside here is the blog allows you to interact with more staff members than usual.

Day 1 was over. Around midnight, after 9 rounds of Legacy we were done, I headed home for a much needed night of sleep.

Again, it was Papers team in the main event during Day 2 for me. Fewer players also means fewer judges, but there were some serious Public Events going on. The most relevant ones were a San Juan PTQ with around 300 players, and a Vintage tournament with a full P9 in prizes with over 170 players.

GP: Madrid surprisingly was a quiet event when referred to complicated rulings; still, there were a few interesting ones. A player was really surprised a Circle of Protection: Red could keep his Progenitus at bay. However, protection from everything (C.R. 702.14i) does not stop someone naming Progenitus as a source of damage; in another match, Arttu Kaipiainen had to tell a player to make a different choice, as Leyline of the Void + Helm of Obedience will get your full library exiled, EVEN if you have a Wheel of Sun and Moon enchanting yourself. You can choose to put the card on the bottom of your library with Wheel of Sun and Moon instead of removing it from the game (C.R. 616.1); however, the Helm still hasn’t seen cards in the graveyard and you will eventually have to choose to remove each card from the game to stop the loop (C.R. 104.4b and 713.3.). A player was trying to counter a Wasteland with a Red Elemental Blast under a Painter’s Servant naming Blue. Since lands are not spells, this doesn’t work (C.R. 111.1 and 305.1.). After that, the player read the card more carefully and proceeded to destroy the Wasteland once it was on the battlefield. With City of Traitors on the battlefield, if you play Glacial Chasm you can stack both triggers so you sacrifice the City first for the Chasm’s ability, and then… well, then you don’t care about the City’s trigger, since it already was sacrificed (C.R. 603.3b.). At the PTQ, an Extirpate couldn’t get rid of a Punishing Fire; in response to the split second spell, you can play the mana ability from Grove of the Burnwillows, giving your opponent one life and thus triggering Punishing Fire on top of Extirpate (702.58b.). The last one comes from the 2HG event; Roberto GonzÃ¡lez was asked at two different tables on the effectiveness of Luminarch Ascension in a 2HG game. There was some debate on this one among judges on the floor; if a player controls the Ascension and only his team mate is dealt damage during one turn, only the team mate’s life total will be affected. Of course, the team’s life total will be changed accordingly, but only one player will be considered to have been dealt damage, thus losing life in the process (C.R. 806.10.).

The day was coming to an end, and John Alderfer, who was HJ of the PTQ (it was scheduled to be Arnaud Bourdoux, but he had a severe pharyngitis, and was almost unable to speak), needed a Spanish translator for an investigation on a Spanish player potentially committing Fraud.

Even though I cannot get into the details, there is something I can tell you. It is so important for players to communicate clearly. During games, make sure you announce clearly what Phase/Step you are in while taking actions or casting spells at all times. This will avoid miscommunications and most likely will keep you out of trouble. Still, if there happens to be a problem, clear communication will help judges figure out what did actually happen, making sure a fair ruling is given.

On the certifications front, there are indeed good news, let’s welcome Miguel Calvo from Madrid to the DCI family. He passed his L1 test, and has already volunteered for GP: Brussels! 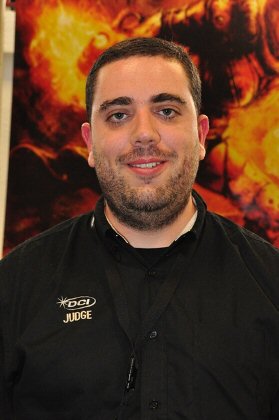 To finish this report, here is the most important fact about this GP. We had loads of fun, and let me quote Jaap Brouwer’s post on DCI Family:

“I just browsed through the list of judges, and OMG, the combined experience of the staff is worth a PT. I’m not going to say good luck, because with this staff you won’t be needing it. Instead I’ll say… have fun!”

We had great fun, and we have proof! 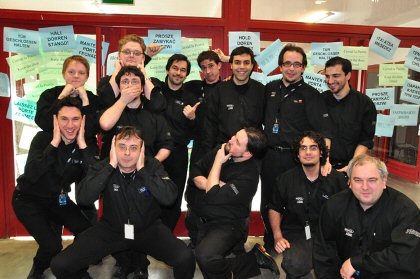 The signs on the doors behind those judges say “Keep the door closed” in more different languages that I can count. What I know for sure is the 66 judges attending GP Madrid came from at least 19 different countries. Apparently there are some judges who claim to have more than one nationality…

Also, here is a short musical video filmed and edited during the GP. it captures the tournament atmosphere and portraits the feeling of friendliness among judges at these events, and I definitely hope you enjoy watching it as much as we did in the making.