I received a lot of good feedback after my last set of videos documenting a Modern Masters draft, so I’ve decided to approach the digital realm again for an M14 release draft. I made a few improvements to address sound/video quality, though I need to obtain even better devices to optimize quality.

Although I’m not a fan of M14 Sealed (it isn’t amazing, but it isn’t bad either), I’ve actually had a lot of fun with the Draft format because there are so many niche strategies beyond the typical core set mechanics.

This set of videos demonstrates how robust blue is in M14, as I began with a B/W deck for a significant number of picks and then moved into blue based on the strength of Jace’s Mindseeker. Before moving on to the video content, a few other thoughts on the format:

Slivers is a real deck, and picking up a rare Sliver or two early in a draft enables significant power via Hive Stirrings and Sliver Constructs, which often go incredibly late in drafts. Here’s an example of a deck that rather easily won an 8-4 queue: 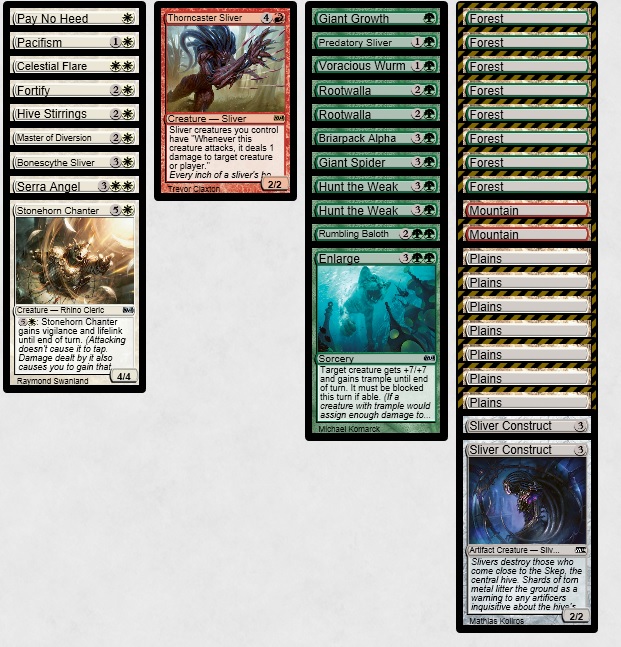 However, without the rare Slivers or a reasonable density of Predatory Slivers, the strategy simply isn’t powerful enough. In the screenshot below, I grabbed an early Predatory Sliver, moved too aggressively into the archetype, and then ended up with a bunch of mediocre 2/2 creatures and never felt like I had a chance to win the draft. 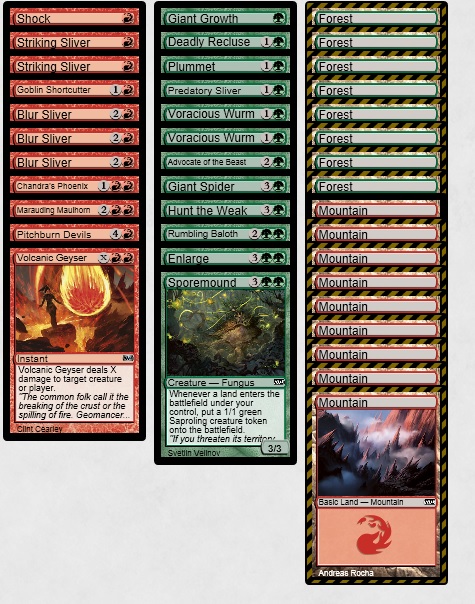 Although I haven’t tinkered with Slivers sufficiently yet, I don’t think it’s possible to move into Slivers safely without two Predatory Slivers / rare Slivers.

Another fun archetype (though one that requires a rare) is Sanguine Bond Control. With Corrupt, Diabolic Tutor, and Bubbling Cauldron in the format (along with “support” cards like Brindle Boar and Verdant Haven), it’s actually possible to force a life drain archetype that can fairly effective win the game. I’ve done two “real life” drafts (hence a lack of screenshots) with this archetype and have gone 5-1, so although it might seem too deep it’s more viable than it seems.

And now on to the videos themselves: