Wizards of the Coast is full of generally nice people. These are folks who have the best interests of their customers at heart; people who want everyone to have a good time. I respect that, I really do. Unfortunately, Wizards has a bit of the tyrannical in them. An elitism, if you will.

I’m sure we’ve all seen R&D’s infamous “letter to the masses” regarding set creation:

“Play with the cards we make. Daddy knows best.”

Wizards of the Coast, Overlords

Far be it from me to say that Wizards doesn’t know what it’s doing, but sometimes people like to play with cards from a different set. A non-existent set, to be fair, but no less fun for its lack of mass production or corporeal presence.

A bunch of us were sitting around one day, drafting Cube/Champs block, and having a fun, although pedantic time. “What if”, someone suggested, “We draft with cards the players made? What if everyone creates cards for a draft, and then we draft them? Wouldn’t that be a fun time?”

BOO stands for Build Our Own, and that’s exactly what we did. Each member of the 8 created 45 of their own cards, including title, abilities, flavor text (if one were so inclined), and of course The Art. You can make super mega brokenized cards or ones as meek as milkwater.

When the GFY Hasbro (later re-named) draft was officiated as an event, literally dozens of local players begged to get onboard. As evidenced by You Make The Card(s), people really like to create their own stuff. I was initially surprised by the amount of interest in the project, but after working on a card to get it just right, it wasn’t difficult to understand why everyone wanted to be in. It’s fun! Challenging too. There’s quite a puzzle to get the wordings and power level just right. Too strong and you get wrecked by your own creations. Too weak and you’ll be embarrassed by the slew of 15th picks. Balance was the goal, and as always, a struggle to attain.

I can’t speak on how the other players created their sets. I started with some Greek mythology, just to dip my toe. Zeus shoots lightning, Hephaestus comes into play tapped, all easy stuff. Here’s one that I’m rather proud of that ended up getting less play than expected: 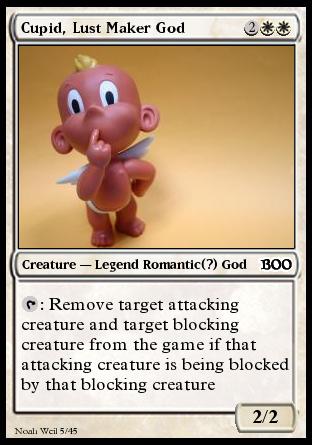 After a few deities I just started picking a color and making a card for it. The Pump Spell, the Burn Spell, damage prevention; all basic stuff. The first artifact/enchantment kill card set the stage for a cycle of cards that had an extra cost for a big effect.

Purposefully, since this was uncharted waters, I kept the cards slightly less powerful than they could be. There was also the choice to keep any fancy mechanics, used or otherwise, away from the cards. Not everyone shared this view, and in retrospect, I could have ratcheted up the complexity and/or power level a bit. My goal was to create decent cards that could be printable, sans this article of course. Each participant had their own philosophy and style. For the record, eight different philosophies = an amazing draft.

After I figured out what I wanted to make in the general sense, I needed to start making the cards with the interface we were using. For BOO we used MTG Editor, found here. This was the software that allowed the draft to go off so smoothly and made all the cards look so neat. For anyone looking to run their own BOO Draft, I don’t think you can do better than this application.

Now, people creating their own sets is nothing new. Famous forumite Mr. Orange has made a complete set of cards, the Fireballz(sic) of Heaven. We always have ideas on how to make the game better, and this is a nice way to find out we don’t actually know what we’re doing.

So let’s assume you’re doing one of these drafts and you’ve spun out 45 well-designed, well-balanced cards. Call it a day, right? Not so fast Tonto. What is your tiny piece of brilliance called? And for God sakes, does it look like anything resembling art? Art that makes sense!?

While having good art and a title are nice, the interplay between them means you have to be kind of flexible. I cannot draw, paint, mspaint, doodle, or anything else resembling the actual creation of something pleasing to the gods of aesthetics. However I can use Google. And Google, well, that’s the keys to the universe baby.

Again though, you have to be flexible. Here’s a card and the accompanying image I wanted to get for it.

Destroy up to two artifacts or enchantments. Lose 2 life.

Location: A place of being.

Action: A mystic of some sort is destroying stuff. He’s exerting extra energy to destroy extra stuff. It hurts. Lots of wreckage, Green and White energy tendrils flowing around the body.

One of the synonyms did give an image I liked, although it made absolutely no sense for the card title or its effects. Luckily, through the power of punnery, everything fell into place like so much clockwork. 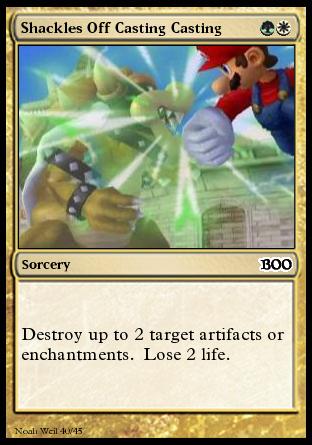 For the most part, such drastic measures weren’t needed. Find art I liked, make a card for it. Make a card I like, find art for it. That Cupid card was originally Aphrodite, but I think the image of the Cupid doll is much more engaging than some naked chick on a clam.

So after a month of card and flavor design, we were ready to ship things off to development. See, no one really thought anyone would get all 45 right. We’ve got smart people sure, but no one does this for a living. Even the people who do it for a living work in teams, and everybody makes mistakes once in a while. So, to stymie potential disaster, everyone had to give their set to someone else for review, as well as look at someone else’s. No one expected things to be error free, but hopefully with one more check in the process, we could avoid nasty power level stuff or bizarre loops. Sometimes things don’t work like they should. Who wouldn’t want cards to be nice and kosher?

Dan “Goy” Diamant, that’s who. Eschewing the process like there’s no tomorrow, he submitted (and had printed) two of the more insane cards in the draft:

T: Remove a creature you control from the game. Return it to play at the end of the turn.


What I like about both of these cards is that they don’t do anything unless your opponent plays with spells. After that they’re… effective. No lies; despite the internal review process, cards were created that shouldn’t have been. This was found out the hard way after draft 1, but for draft 2, everything got picked over and altered (when necessary). The above cards got 4 mana activation costs, others got timing rules tinkered around with. Basically, whatever was necessary to make things more fair and balanced. Personally, I thought the Committee of Change was the best part. Who wouldn’t have liked to take a sharpie to Visara? We had the authority to alter whatever was necessary to make a better experience for the group, and we did so.

Incidentally, most cards did fall below the Visara level. When a card’s power was questioned, an accurate “it’s no Visara” was enough to avoid the pen. The above two were not so fortunate.

I’m not a parent, but I imagine the same spike of pride one gets when watching a personally created card win a game is akin to watching a child beat up another in the sandbox. It’s a nice feeling, seeing something you made, conquering. I also cried when my cards said their first word.

That instinct to want to see a card kick booty is what led to a rather powerful (sub-Visara) drafting pool. The average power level of each participants’ set was quite strong: 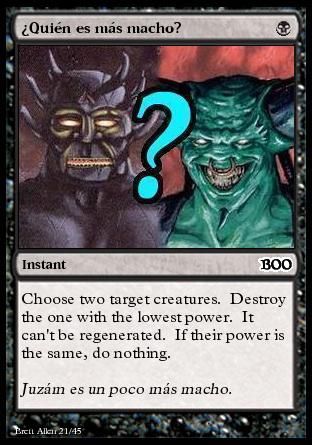 and the wildest mechanic of any cards: 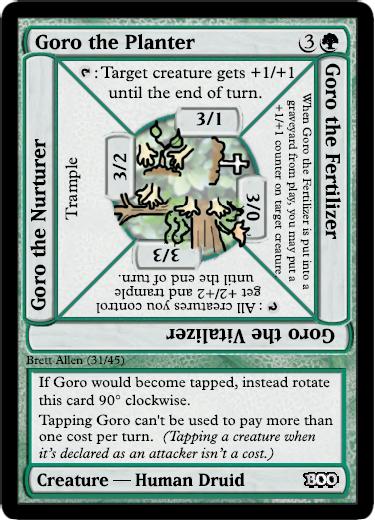 The Blue version is totally sick, yet it tabled twice because no one understood it. We got it figured out by the second draft, and they’re all amazing. Four way cards, you saw them here first!

Also much thanks go to Brett for spending his time and UW resources to get the cards printed, ready for slipping onto commons. You = the man.

One caveat is that this event takes a looooong time. You know how in prereleases there’s that guy who hasn’t read the spoiler and is reading every single card all the time? Well there is no spoiler and every card is brand-spankin’ new. People not only have to read/look at cool new cards, they have to evaluate power levels and give out props and slops every single pack. Kudos + reading takes a while; all I’m saying. Then of course the actual play results in more reading of cards, more shout outs, and of course, parents coming over to watch their babies do their thing. So devote some time to the event.

As mentioned, after our first draft we re-did “problem” cards and drafted again. This one went much smoother, and I think was even more entertaining for the group. Peoples’ decks were a lot more cohesive and there far was less random stoppage.

What does the future hold for the BOO draft? Quite a bit actually. You see, the made cards don’t disappear. Each person got their 45 back the next time they want to tinker around with them or a draft. I’m told that somebody actually offered cash for a fake card, but of course no one accepted that. They’re kin!

Having since spoken to each member of the draft, every person has told me they’re thinking of cards for the next event. That’s a pretty good return. Get enough people, we can start holding little tournaments, leagues, whatever! It’s really that fun. Everyone understands Ravnica is the new, exciting kid on the block. When that interest wanes, consider getting a group together and BOOing it up.

For those interested in seeing all the cards in their (updated) glory, you can follow the link here.

I’ll be attending Pro Tour: Los Angeles this weekend, so feel free to say hi. Any questions, comments, I can be reached at:

P.S. Good luck at the PTQs this weekend. May I suggest a 7-0 deck from… this… weekend…?

Ledger Shredder has emerged as the Constructed MTG all-star of Streets of New Capenna. Dom Harvey breaks down its many uses, particularly in Pioneer and Modern.

Hasbro And Shareholder Dispute Continues Ahead Of Annual Meeting

Both Hasbro, parent company of WotC and Magic: The Gathering, and Alta Fox Capital Management continue to court investors and shareholders ahead of the June 8 annual meeting

Check out all the previewed cards from Wednesday, May 18 from Commander Legends: Battle for Baldur's Gate

Breaking Down The New And Returning Mechanics Of Commander Legends: Battle For Baldur's Gate

Get up-to-speed on all the mechanics of the latest Commander Legends set.
View More