This past weekend, Zack Hall and I covered both the Standard and Legacy Opens at SCG: Worcester. It was a great time and I got to watch some great games of Magic. With this being the last weekend before M14 comes out and shakes up Standard, I wanted to review some of the decks that put up solid results this past weekend at the Open. Also, I wanted to talk about some other decks I tested that could be potential contenders in the new format. Coming right after Grand Prix: Miami, I figured Jund would be a big part of Worcester’s metagame and I was not disappointed as the Top 8 featured four Jund decks. Three of them were traditional Jund and one was an aggressive version, much like Cedric’s with Falkenrath Aristocrat, Flinthoof Boar, and Arbor Elf/Avacyn’s Pilgrim as mana accelerants. However, as most of you know, Junk Aristocrats ended up winning it all in an exciting final – further proving its power in Standard.

Joel ended up posting this status on Facebook the Friday before the Open:

Anyone who knows somebody or is going to Worchester who has standard cards to borrow me? Ping Brad Nelson Gerry Thompson Todd Anderson with more!

I ended up seeing this right away. Since I was doing coverage and Joel is an awesome guy, I figured I’d help him out and lend out my Grixis deck that I have been working on for a while. My first build of Grixis was something I wrote about a while ago that featured Duskmantle Seer. After some solid results with the deck, I decided to switch it up and focus more on a control build. As you can see, the deck is very controlling with only a few win conditions. I win my fair share of games beating down with Snapcaster Mage, Augur of Bolas, and even Rakdos Keyrune a lot more than people think, but make no mistake about it: Planeswalkers, Olivia Voldaren and Aetherling are what normally close things out. 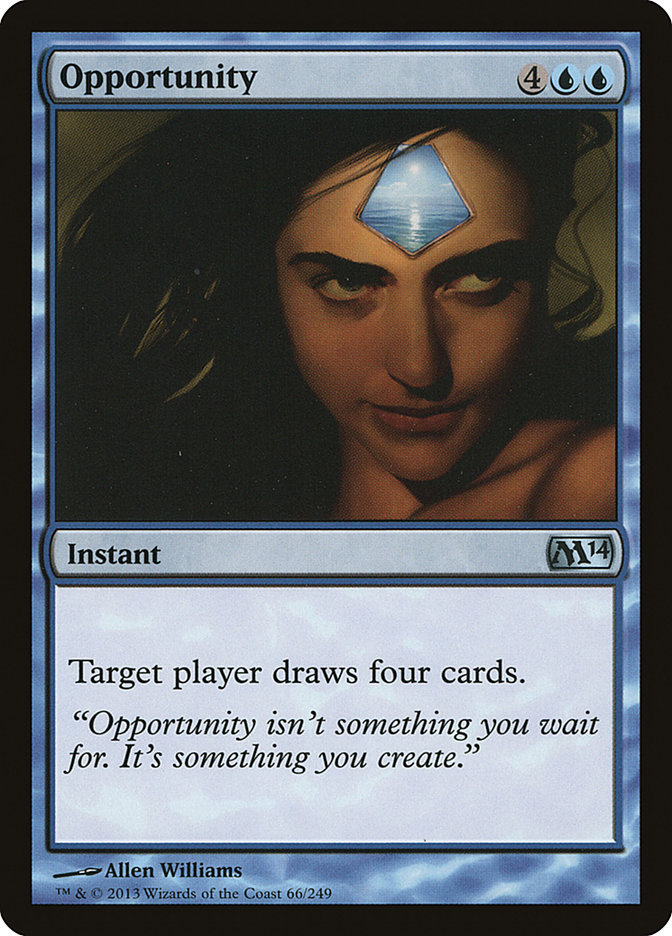 When M14 comes out next week, the deck will change a bit since there are definitely some new cards that caught my eye. The first card, which I mentioned in my other Grixis article is Opportunity. Since Grixis doesn’t have access to Sphinx’s Revelation, Opportunity will allow you to one-for-one your opponent via removal and countermagic; with Jace, Architect of Thought and Opportunity, you’ll be able to refill your hand to make sure you don’t run out of gas. I would probably play only one copy of Opportunity maindeck, as you don’t ever want too many five- or six-drops in your opening hand, but I can also see playing an extra copy in the sideboard for the control mirror.

Another card that really caught my eye as a strong sideboard option is Tidebinder Mage. I’m uncertain how much the mana will have to change for this, but Tidebinder Mage can be very important to combat any aggressive red or green deck. Tidebinder Mage will have a much more relevant impact in Legacy or Modern as a way to deal with Tarmogoyf, Knight of the Reliquary, or a unique way to deal with a summoning-sick Grim Lavamancer, but it is currently being heavily overlooked in Standard.

The third card on my list for Grixis is Doom Blade. Doom Blade is an obvious addition as it is able to hit nearly every creature in Standard, since no one plays Zombies anymore.

Speaking of no one playing Zombies in Standard, now is probably a good time to start again. Doom Blade is a going to be an incredibly popular card, as both control decks and decks playing black will find room for this premiere removal spell. Due to this, people will be cutting down on other removal that was good against Zombies in the past.

A lot of new cards have caught my eye for Zombies in M14 besides Doom Blade. Shadowborn Demon, Lifebane Zombie, Mutavault, Dark Prophecy, and Gnawing Zombie are all respectable options from Magic’s newest set. With all these new cards in combination with Innistrad Block all-stars Evil Twin and Diregraf Captain, new life has been breathed into our undead horde. Before I go into more details, let’s take a look at my current Zombie list I’ve been testing.

This deck is still in the works, but playing something like Zombies is always fun. In an unexpected new metagame, going into a tournament with an aggressive strategy is something that usually gives you an edge because there are never wrong threats, only wrong answers. In our deck, the only card that could come back to hurt us is Doom Blade against another black deck. Everything else pretty much goes with the strategy of being aggressive and chipping away at our opponent’s life total. When looking at top decks from the StarCityGames.com Open in Worcester, I noticed there were no Zombie decks. This is because M14 won’t be legal until the StarCityGames.com Open in Richmond, where I hope to see Zombies rise to the top. The sideboard is a rough sketch since I’m certain decks like Junk Aristocrats, Jund, U/W/R Flash, Naya, and Esper Control will all be very popular but you must remember that new decks will show up as well.

I do want to run the full four Mutavaults but it becomes a huge strain on the mana with cards like Lifebane Zombie and Geralf’s Messenger to do so.

As you’re probably aware, Junk Aristocrats dominated the field at the StarCityGames.com Open in Worcester. There’s a card I believe would be a nice addition in Michael Bonde winning Junk Aristocrats list seen here:

If the deck changes it up a bit to add more Humans, I could see Xanthrid Necromancer finding a home in the deck. I believe this card is extremely powerful, but Junk Aristocrats might not be the best place for it. Perhaps a new deck will arise, especially when Pillar of Flame rotates out of Standard. While doing coverage, I was impressed with how many small interactions and synergistic combos the Junk Aristocrats deck really had. After speaking with Bonde, he felt the deck was really fun and if it keeps getting more and more popular, specific sideboard cards will most likely be needed for the mirror match. Some cards that come to mind are Profit//Loss, Curse of Death’s Hold, Blood Baron of Vizkopa, and possibly Lifebane Zombie as a sideboard card to fight opposing Obzedats, Voices, and Cartel Aristocrats. With Ratchet Bomb coming back in M14, winning with the deck might become a bit more difficult since many of your threats are either tokens or have the same casting cost. I still think Junk Aristocrats is a great deck and with Brad Nelson Top 4 finish at Grand Prix: Miami and Michael Bonde win at the StarCityGames.com Open in Worcester, the deck has become a top dog in the format.

Another deck that put up another solid performance was Kevin Hamel’s Bant Hexproof deck:

This deck will greatly improve after M14. Two cards that specifically jump out at me and have been performing well in testing well are Gladecover Scout and Witchstalker. With both of these new creatures, Bant Hexproof is able to play a full complement of hexproof threats instead of cards like Fencing Ace or Silverblade Paladin. With the addition of these creatures, Bant Hexproof becomes much more powerful; the only real drawback is just the ability to draw the correct mix of enchantments and creatures. But with testing and more Open Series results to come, this problem should be solved fairly quickly.

Witchstalker helps against the rising popularity of the all-star split card Far//Away. Since you can choose to enchant other creatures, it helps separate your power with Witchstalker’s ability. Far becomes much worse against you with an increase of hexproof creatures. Since people will be boarding more sacrifice effects due to the rise of hexproof creatures, Sigarda, Host of Herons becomes a good answer. But due to the high casting cost of Sigarda, playing just one or two in the sideboards is probably your most realistic option.

Another archetype that is powerful, although it failed to make a Top 16 appearance at the StarCityGames.com Open in Worcester, is Naya. That probably changes moving forward due to the addition of Scavenging Ooze. Scavenging Ooze provides a new much-needed two drop along with a different angle of attack to combat Junk Reanimator and Snapcaster Mage decks. With the rise of Junk Aristocrats, it provides a good way to gain life, stop the flashback of Lingering Souls, and prevents Varolz, the Scar Striped from getting out of hand. Chandra, Pyromaster and Garruk, Caller of Beasts could potentially make their way into the bigger version of Naya (which features four copies of Farseek) but I expect Scavenging Ooze to see play in all forms of the deck.

If there was one thing I really took away from this weekend watching all of the matches, it was that knowing your deck is often more important than playing the perceived best deck of the format. With that said, my best advice to you is to start testing out the new cards yourself even before the prerelease. This will help you get a jump on the metagame and prepare you for the next StarCityGames.com Open, StarCityGames.com Invitational, or even your local Friday Night Magic.

Thanks for reading and feel free to comment below with your thoughts or message me on twitter @gfabs5.