Right…so…we’re going to talk about a deck today that got bodied three times on camera this weekend at the Knoxville Open. When I say bodied, I mean we got walloped. It was rough. To say that our B/G Aetherworks deck was camera-shy would be an understatement. This was changing for the first time in a high school locker room in front of your peers all over again. Major shrinkage.

But that doesn’t mean you need to leave! I’m not going to waste your time like I usually do!

Two members of Team Nexus brought B/G Aetherworks to the Knoxville stop of the SCG Tour, me and Brad Carpenter. Well…three people actually brought the deck. Tannon Grace was the third, but it was his birthday and he left a girlfriend and adorable puppy at home, so when he took a couple of losses, he decided to head out and celebrate with his family. At any rate, Brad and I were able to put up a Top 16 and Top 32 performance, so that must mean this deck has legs, right?

The idea for B/G Aetherworks came from Gooroom on Magic Online, who ran the deck to a sixth-place finish during the Standard PTQ. Tannon started messaging Brad and me about it while we were busy testing G/R Aetherworks. B/G Aetherworks had a pretty simple selling point: it could do two things with reasonable efficiency. On the surface, it’s an Aetherworks Marvel deck with multiple energy generators; four copies of Emrakul, the Promised End; and the eponymous artifact to cast your spells for free. When that plan fails, or the matchup calls for it, you become a makeshift Delirium deck that can cast turn 4 or 5 Ishkanah, Grafwidows or speed out an Emrakul. You play Liliana, the Last Hope and similar removal to Delirium, all of which lets you do two different things well. Not as well as their counterparts, but we’ll get to that later.

What We Got Right with B/G Aetherworks

At the end of the tournament, with Brad going 12-4 and me with an 11-4-1 record, we both kind of looked at each other and sighed out loud. “This might be the best deck in Standard. But not yet.”

Listen, you saw us get rammed on camera a few times, so it’s easy to write off the deck as bad. That’s the mentality of a child who would take their limited experiences with something and make a sound judgement. That’s simply not the case with B/G Aetherworks, because a 23-8-1 record for a completely untested and unknown deck isn’t the kind of thing you just write off.

We knew that this was a hybrid build, and that it would do several things:

3. Give us a ton of game against the “best” deck in the format, W/U Flash.

Based on our limited understanding of the deck at the time, B/G Aetherworks requires the pilot to understand their role at the time and implement the strategy most pertinent to what the situation calls for. When battling against B/G Delirium, you want to be Aetherworks and overcome them with an early Emrakul. If your opponent is wielding W/U Flash, you are better-served being a Delirium deck that can strangle them with Ishkanah and threaten with a late Emrakul. Figuring out what was important with other matchups mattered, but those were the two we knew we’d see the most of, so it felt pointless to try to fight it. We figured out plans for Mardu Vehicles, various blue control decks, G/R Aetherworks, and the different flavors of Zombie decks out there.

The format might feel like a two-deck fight, but it maintains a strong sense of diversity. Yes, the two best decks are B/G Delirium and W/U Flash, but over the course of the tournament I faced the aforementioned powerhouses along with Mardu Vehicles, Esper Control, Jeskai Control, B/U Zombies, and Temur Energy. Seven different decks over 15 rounds with others that I didn’t run into prove that you have to have a plan against way more than just the two that stand atop the metagame. B/G Aetherworks gave us a multi-faceted approach to handle just about every strategy out there, far less linear than the G/R Aetherworks deck and much more explosive than traditional B/G Delirium.

The main deck was very close to what Gooroom piloted, but we believed Traverse the Ulvenwald would be better to ensure we were hitting land drops and provide a tool to search up a potential silver bullet down the line. Other than that, we decided to spend some time on the sideboard.

What We Got Wrong With B/G Aetherworks

Well, first and foremost, between Brad and me, we took multiple losses to B/G Delirium. This was supposed to be our bread-and-butter match, but we completely misjudged the early strategies we developed to combat it. Friday evening, we discussed how to sideboard against all the decks we expected to play, and when it came time to talk about Delirium, we came to a few conclusions that involved bringing in all our copies of Transgress the Mind, Tireless Trackers, and Lost Legacy and taking out Grasp of Darkness and Grapple with the Past…basically trying to become a more focused Aetherworks deck that can disrupt their draws. Trackers were so we could get deep in the trenches with them if needed, grind them out with card advantage, and inevitably overwhelm with way more Emrakuls than they had.

That plan was a failure from the start.

B/G Delirium is capable of winning matches in multiple forms, and one of them is early pressure backed up by discard spells and battlefield presence. Grim Flayer has the capability to run away with a game if it is left unchecked, so removing Grasps was a miserable idea. After Brad and I took an early loss to Flayers killing us before we could set up, we adjusted the plan back to Grasp of Darkness. While this would help, it proved not to be enough. That fell on us for misjudging the matchup entirely.

The sideboard, which was also close to Gooroom’s, wasn’t…good. We played all of the cards we were certain that we were supposed to play, instead of different choices that may have accentuated the unorthodox approach already revolving around B/G Aetherworks.

After the tournament ended, we agreed that we misbuilt the sideboard and that it almost certainly cost us two losses each. Three Tireless Trackers is theoretically the right number, but we believe that should be shaved down to two. Transgress the Mind suffered a similar problem and wasn’t as impactful as it was hoped to be. It’s necessary, but also as a two-of.

Lost Legacy was awful and not worth warranting in the future. Kalitas, Traitor of Ghet suffers from this deck not playing as much removal as the B/G Delirium builds, and while it’s a tremendous stop sign against something like Mardu Vehicles, it has little-to-no impact anywhere else.

Once we were able to put together that the maindeck required minimal changes but the sideboard needed large-scale ones, we were able to go to work. There are a number of cards that we’re considering, and although we don’t have those numbers nailed down quite yet, I’m excited to share them with you. Heck, if you have any suggestions, I’d love to hear them.

Towing the line with other Delirium decks, Ob Nixilis Reignited is a solid card that can help us achieve some level of card advantage in the B/G matchup. This card must be played with a certain level of finesse because an opposing Emrakul can be used to absolutely wreck your battlefield state if Ob is in the equation. Other than that, the powerful planeswalker adds of a ton of value to several gameplans. If Bradley Hill’s Jeskai Control list takes off, Ob Nixilis Reignited becomes a much better option. 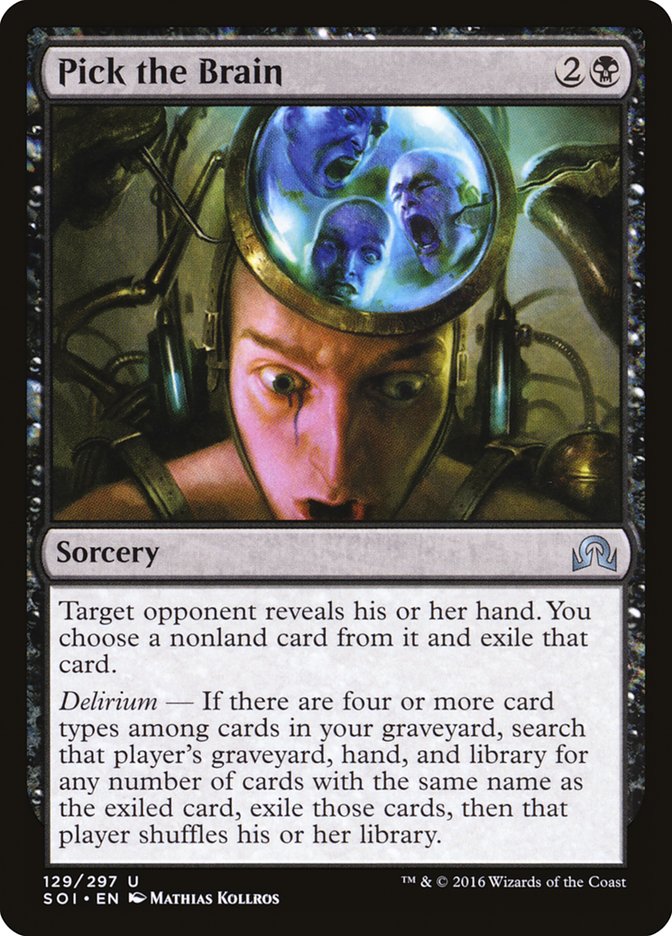 B/G Aetherworks has the gift of being able to actively achieve delirium with extreme speed. At multiple points this past weekend I was staring at it by turn 2. Curve considerations due to Grapple with the Past and Vessel of Nascency mean that turn 3 is more optimal to cast hand disruption spells, and Pick the Brain was strictly better than Transgress the Mind most of the time.

The first iteration we encountered of B/G Aetherworks played a single copy of Ulamog, the Ceaseless Hunger in the sideboard, and we quickly dismissed it as too expensive. If you didn’t hit it with your Aetherworks, we reasoned, it was a dead draw in most matchups. As soon as we got a feel for the deck, that myth was quickly busted. In your grindiest of games, Ulamog servers the purpose of being a lights-out hit from Aetherworks Marvel or being something you can cast much later in the game off the land drops you’ll be hitting from Vessel of Nascency, Traverse the Ulvenwald, Servant of the Conduit, and Attune with Aether. The exile cast trigger is hyper-relevant in this format, and not playing this card felt pretty bad when I saw the many spots it would have been great. 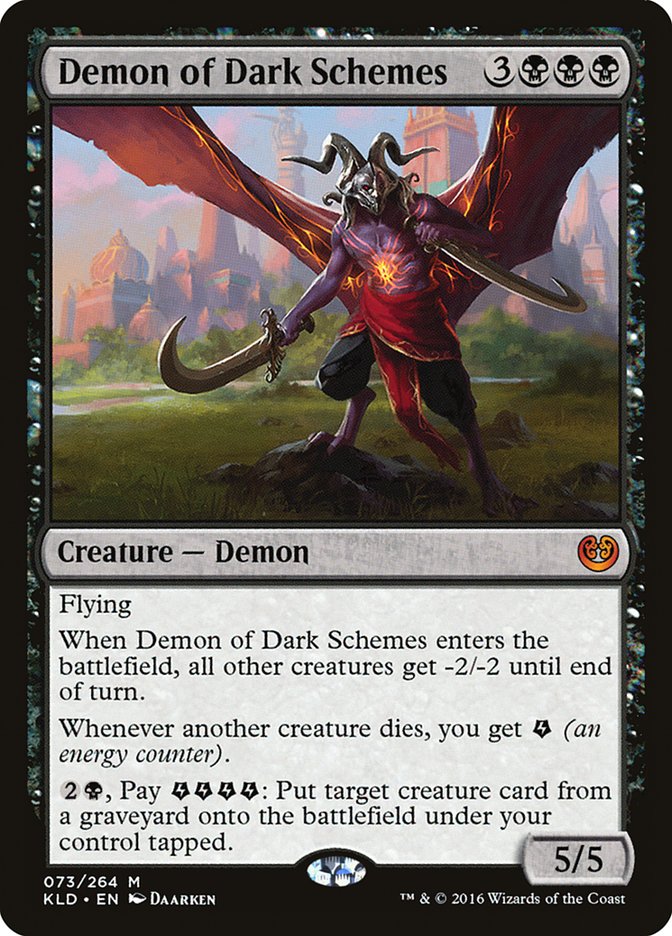 Feel free to file this under the “too cute” category, but the night before Knoxville showed that Demon of Dark Schemes is absolutely ridiculous when it’s good and still a large, flying body when it’s bad. Against the aggressive decks it became almost an auto-win card that allowed for massive battlefield swings and the energy needed to power out an Aetherworks Marvel activation. You have to consider that Demon of Dark Schemes was the last card we cut from the 75, and at one point it was squarely in the maindeck, usurping a spot from the two Noxious Gearhulks. I think we only cut it because of fear rather than solid data, because if I could go back I would 100% have kept it in. Also note the interaction Demon has with opposing Ishkanah tokens, and how relevant the rebuy on any creature in any graveyard is in this format.

If you’re looking for a powerful option to take to your local Game Night or even the StarCityGames.com Invitational coming up, I’m not joking when I say this deck felt like it was doing some of the most powerful things in the room while we battled with it in Knoxville.

Just…uh…avoid the camera at all cost. I won my other three off-camera features, but when three of us were put under the bright lights, it immediately made the deck catch on fire. I am thankful that I was able to give the good people in Twitch chat something to laugh at, however, aside from the fact that I’m bald and look older than 30.

This weekend was absolutely delightful and one of the more fun tournaments I’ve been to in quite some time. Emma Handy, one of the most beautiful people I’ve met playing Magic, finally got her Top 8 representing Team Nexus. She deserves every bit of happiness it brings to her; it was an awesome birthday weekend for my boo. Devin Koepke and I sang “Swimming Pools” by Kendrick Lamar while we played a feature match. Every draw step? “Fade it. Drank. Fade it. Drank.” Everything about Knoxville was perfect.

Still got smashed on camera, but hey…

The deck is great. Trust me.