It’s certainly not a bad time to be writing about the format. Vintage Masters has just graced our presence online, and Magic 2015 is already getting its fair share of hype. For fans of Classic Pauper like you and me, there will undoubtedly
be plenty to discuss and experiment with for the remainder of the summer. In this article, however, I’d like to take some time out to thank the supporters
of my content before jumping into some of the Magic 2015 spoilers. We’ll first be doing that by looking at some of your
previous comments!

Your Thoughts From Last Time

And by “some,” I mean “one.” There was a rather relevant comment from my last article on Vintage Masters that I’d like to
highlight, because it covers a couple of cards that I missed!

I have to apologize for not previously identifying these cards as being common in Vintage Masters. Apparently, I wasn’t the only one, since WOTC
felt compelled to release a separate rarities list for
those of us who were unclear. I’m not all that sold on Brindle Shoat as a Pauper contender, since the potential upside (getting a 3/3 body for 1G) is only good, while the potential downside (getting a 1/1 body for 1G) is awful. Chainer’s Edict should see play somewhere as far as I’m
concerned.

Our next order of business has to do with a couple of brave souls who decided to pilot a deck of mine with their MTGO event tickets hanging in the balance.

In early May, I wrote an article and released some videos showcasing a White Weenie variant I
pioneered and christened “Tithe Weenie.” The name was prompted by my main deck, which consisted of the full suite of Gatecrash‘s Syndic of Tithes
and a pair of disruption spells in the form of Mana Tithe.

Have a look at my 75, which was recently piloted in a Pauper 8-man.

The deck is not interested in quick kills, but is instead almost purely focused on staying power. Card advantage and resiliency to removal are two of the
deck’s cornerstones, and unlike other Weenie variants, this one is far less often hindered by a Secluded Steppe in our opening hand. While sacrificing
Haunted Fengraf in the late game can shovel up a clunker like Squadron Hawk, it can also feed us a nice helping of value by way of Hopeful Eidolon, Kor
Sanctifiers or Loyal Cathar.

One of the cards that is no longer being anticipated by opponents is Guardian of the Guildpact. I see little incorporation of the cards that once hosed
him, cards like Agony Warp, Perilous Myr, and Serrated Arrows. This makes for a typically potent win condition provided we play around edict effects as
best we can.

Here are some basic sideboarding guidelines for you to start with and build upon.

Resolving four mana spells against Delver is not exactly realistic, and since Guardian has trouble with Spire Golems and multiple Quicksands, it ends up
being less valuable than something like Kor Sanctifiers. Eidolon is never being cast for less than four, and even then it’s not giving us much of an edge
(our creatures are generally better in combat already, the trick is actually getting them to resolve).

Aven Riftwatcher is a fine combatant against most of their deck, and Unmake simply provides us with more answers to Delver of Secrets or a card like
Stormbound Geist.

Syndic just isn’t long for this world in the face of so much removal, and I doubt you’d argue that Orders aren’t strictly better. I can’t see wanting
multiple Eidolons here, since we usually will have higher impact things to be doing with our mana.

Mana Tithe stays in to hopefully snipe a desperation Gray Merchant of Ashphodel, and the typical path to victory involves soaking up removal with early
weenies and then punching through the mid and late game with protection creatures. Sanctifiers has a critical extra toughness against Chittering Rats and
Phyrexian Rager, and he just might be able to bust an Oubliette.

Burn decks are fast, so it doesn’t hurt to cut a four-drop like Guardian. Similarly, leaving Mana Tithes in the deck would tempt us to leave up W rather
than spend all of our mana each turn. Their one mana burn spells often can’t be countered by Tithe anyway, so the card ends up probably just being a trap.

Eidolon does not boost our guys enough to trade with theirs, and Mana Tithe won’t hit very much considering the fact that they have a number of free
spells.

Artifact hate cards like Dust to Dust are arguably a trap. The only artifact we usually care about is Myr Enforcer. Furthermore, Affinity can’t outrace us
without 4/4 creatures or Atog. Unmake solves all of these problems, though we can still lose if we don’t draw enough of them!

Because we’re boarding into Patrician’s Scorn (a card that can potentially bust our own Journeys), and because most of our opponent’s creatures can’t be
targeted by us, Journey is a pretty safe cut. Strands is an awesome racing tool, and Unmake gives us at least a pair of answers to Aura Gnarlid.

I can’t think of many answers the Tron decks have to Guardian. A well-timed Mana Tithe from us could also end up being pivotal. Here, Journeys get much
worse if the opponent decides to board into Ray of Revelation.

Guardian does not match up well against Nivix Cyclops, and while Mana Tithe has its uses our intention is to kill all of their problem creatures (Fiend and
Cyclops), thereby leaving them with a bunch of dead cards in hand. Prismatic Strands is quite a trump here, and Unmake is exactly where we want to be
against this deck (in other words, Removal-Heavyville).

A big thanks goes out to Littlemastercz, not only for showing interest in the deck, but also for bagging a Constructed Queue with it. It looks
like the final matchup in this Queue was against Mono Red Burn, so I imagine the Aven Riftwatchers, Hopeful Eidolons, Prismatic Strands, and Syndic of
Tithes came in handy!

Branching away from the Tithe package of Syndic and Mana is this more orthodox White Weenie list. It was piloted by Kelevra, a player I’ve both played
against and chatted with, in one of gatherling‘s

As you can see, the Eidolons, Syndics, and Mana Tithes were cut along with a Kor Sanctifiers and a Guardian of the Guildpact (technically these were just
transferred to the sideboard). Replacing them are the familiar one-drops Icatian Javelineers and War Falcon, plus a pair of main deck Aven Riftwatchers to
add to the overall soldier count. It seems that Kelevra is in favor of added evasion and faster creature saturation. I can’t say whether this is a strictly
better way to go or not, but keep in mind that it makes the deck softer to Cuombajj Witches, Electrickery, and the like.

Red in the Place

I couldn’t help noticing another winning list that may have been inspired by a certain Pauper article. This article was not written by me, but rather byAlex Ullman (a piece entitled ” Pauper Brew House“). Thanks to headshot93 for taking a Mono Red Tron
deck into battle, and good call on Alex’s part for seeing the potential in such a strategy.

I’m hoping that this will open up even more avenues for the Tron lands in Pauper, since you may recall my (failed) attempts at making Mono Blue Tron a viable deck.

As we transition into Magic 2015 spoilers, I want to reiterate the fact that your participation in the Pauper
competitive arena is greatly appreciated, as are your contributions to the format’s ongoing discussions. Please keep it up!

Most of you have probably seen the current spoilers, and know that the returning mechanic this time around will be convoke. So far, none of the spoiled
commons that feature convoke are exciting me. Nevertheless, there are a couple of new Pauper cards that might have what it takes. 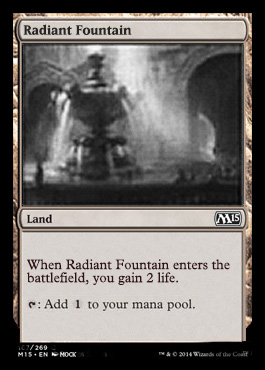 Why do I like Radiant Fountain? Essentially, for the same reason I like cards such as Pristine Talisman: it makes life gain readily and reasonably
available to any kind of deck.

Take something like the Mono Red Tron list above, which has to resort to splashing Circle of Protection: Red in its board because there is nothing in its
baseline color pie to counteract burn spells. Granted, Tron is already playing enough colorless lands as it is, but with Chromatic Stars, Expedition Maps
and Prophetic Prisms around I don’t think adding Fountains is an impossibility.

Another thing to note is that Radiant Fountain fills a pseudo-Glimmerpost role in decks that may want to abuse Ghostly Flicker. Imagine a Dimir Flicker and
Mystical Teachings deck that also has few natural ways of gaining life. Throw in some Fountains and Prophetic Prisms to bridge the color gap and we could
just be onto something.

This might be cheap enough to be useful, particularly in Mono Blue Delver if they need a flexible way to out-tempo opponents and deal with noncreature
threats (pesky auras come to mind). I think the sorcery speed probably kills much of its playability, but I’m not completely writing the card off.

What do you think of the winning deck lists highlighted in today’s article? What cards are you looking forward to from the upcoming set?