Our brains, due to the way we evolved as primates, exhibit a number of interesting cognitive biases. One of the ones I was disturbed to learn of is called the Dunning-Kruger effect.

Essentially, incompetent people are too ignorant to know it. Psychologists David Dunning and Justin Kruger asked study participants to take an exam and then rate their performance. Without fail, almost everyone thinks their performance is above average. Even the people who flat-out did the worst (10th-15th percentile) put their performance in about the 60th or 55th percentile. They thought they performed above average! They weren’t simply trying to make themselves appear better either; even when offered $100 to rate themselves accurately, they couldn’t do it. 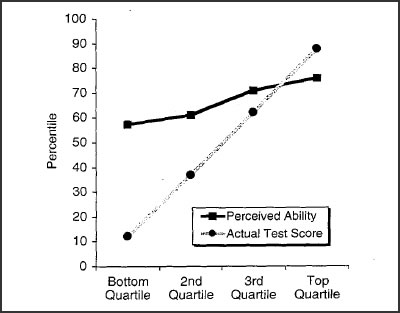 Here’s why this is so important: the tests were on a wide variety of subjects, ranging from "logical reasoning, emotional intelligence, humor, or even chess abilities." It applies to everything you know and care about. And it’s based on over a decade of research.

Whenever you get into a debate with someone who just doesn’t seem to be listening at all, this is likely why. When you explain that you’ve spent a lot of time looking into issues of race, gender, and sexual orientation, but someone who hasn’t done any research assumes you’re just wrong, this might be why. If you’ve attempted to have a rational debate with a religious extremist and gotten nowhere, this might be why. (I tend to be very tolerant of other religions unless they’re imposed upon me. Still, any ideal taken to extremes can be dangerous.)

It’s not only small issues, either; this cognitive bias threatens democracy as a whole, which assumes its citizens can properly identify the best candidate or legislature. We are particularly noticing the impact right now.

In fact, Dunning and Kruger discovered one very interesting application of their results, which might have benefited me had I known about it for my article last week.

“Starting in adolescence, women tend to rate themselves as less scientifically talented than men rate themselves. Because of this, women might start to think they are doing less well on specific scientific tasks than men tend to think, even when there is no gender difference in performance. Thinking they are doing less well, women might become less enthusiastic about participating in scientific activities.”

Men and women were given a pop quiz on scientific reasoning, and although there was no gender difference in performance, women tended to believe they did worse. Afterwards, when they were invited to participate in a "science competition for fun and prizes, the women were more likely to decline the invitation."

It’s all about perception.

So, now that you know the trick to the question, how good at Magic are you?

Or rather, how good do you think you are? Because you’re probably wrong.

Whether you underestimate your abilities or overestimate them (as is far more likely), you’re very probably wrong!

Yes, I feel comfortable telling you that you’re wrong. Similarly, I feel comfortable knowing that I’m wrong. Why? We all do it. There’s no shame in having a human brain. (If there were, I’d have to start feeling embarrassed straight away to make up for years of brashness.) However, once you know its limitations, you can harness that knowledge to perform better and achieve more. I hope you’ll even be happier knowing that this burden is not on you.

What If You’re Wrong?

Let’s return to my question from the beginning, applying it to Magic this time.

If you think you’re good, then what happens if you’re wrong? And, according to the graph we viewed above, you’re probably wrong.

Maybe you don’t think I’m really talking to you. After all, your assessments are pretty good even if most people’s aren’t, right? Yet, that’s the really devastating thing about this: almost everybody thinks this way!

So what if you’re wrong?

For one, it’s hard to improve if you think you’re already great. I mean, if you’re a good player, why would you want to change? Unfortunately, if you’re mistaken, you could be stunting your progress through delusion alone.

Conversely, people who approach the game with a sense of humbleness are open to change. They’re honest about their limits and can appreciate that they might not make all the right choices all the time. I think this is a much better attitude to have if you want to genuinely improve. It might be a little upsetting to think for a moment that you might not be the best, but I believe it’s a necessary step in getting there. Besides, I never said you were awful. I simply said that you’re probably not as good as you think.

On the other hand, what if you think you’re "pretty good" when you’re really excellent? This happens to people falling in the top 75th percentile. Well, in that case, you’re already excellent at the game! So who cares? Gah!

Fortunately in Magic, unlike emotional intelligence and humor, test results are readily available to us. Our own assessments might not be accurate, but we can get an idea of our ranking by keeping track of our tournament results week after week. I have some friends who are either on or coming off of a bad streak. We all go through this from time to time, whether it’s caused by tilt, unfamiliarity with the format, or something else going on in your life or in your head.

However, after not making Day 2 for a certain number of GPs when you’ve been more successful in the past, you’ve got to be honest about your results. Because those really are results, and if you would only look at them directly you might be able to learn something. What changed? If you’re only beginning your competitive ascent, then what could you change to improve your results?

Ultimately, the reason we love Magic so much is that it’s always changing. We’re already looking over the horizon towards Avacyn Restored and making plans for how it will stir up the current Standard format. I know I’m really looking forward to drafting a new set, too. So isn’t it a little silly to resist internal change so staunchly? We’re so excited about these external changes, after all.

Finally, it has been said time and again that Magic is about teamwork. Having the opportunity to work as a part of a team, sharing cards and ideas, is important to growth as a player. You’re not always right, so it would be hard to build a deck all on your own. As a group, though, we can undoubtedly build and test a particular list until it’s really solid. We see this in decks that have made the Top 8 of tournaments as they’re tweaked from week to week. The players aren’t the same, so they make different choices which prove to also be viable. Delver springs to mind immediately as having a wealth of options that players are exploring all over the world.

I’ve talked about it on a macro level, but this question is equally important when you’re playing Magic.

One example is the metagame. Sure, you want to pick a deck you’re familiar with and that you believe is powerful. However, it’s important to get other’s opinions if you want to take home the trophy. Your deck doesn’t exist in a vacuum, so it’s vital to know what others will be playing. Whether or not your choice is "right" is influenced by the decisions of others.

In the game itself, we can break layers of consideration down into tiers.

If you want to increase beyond an intermediate proficiency at the game, it’s important to learn to put your opponent on plays. However, if you want to advance beyond that, you should think critically about the ramifications of your guess being wrong.

Here’s an example: you guess, from the way Will has been playing out creatures, that he doesn’t have the Day of Judgment you saw in game 1. After a couple trades, you’re left with a board of one creature to nothing. If you play the 4/4 from your hand, Will will be dead in one turn instead of two.

But what if you’re wrong?

What if Will does have Day of Judgment? You see that you’ll be left with no creatures and no cards in hand. But it still might be the correct play.

Essentially, this is an assessment of EV. You look at the odds in favor of a play, the odds against it, and then you make your choice. Sometimes you’ll have to make the strongly unfavored play that you only have a small percent chance of hitting, because the alternative is that your opponent simply answers your threat then kills you.

An example of this would be when your opponent is at eight and you have seven lands in play. You’re dead to fliers next turn, and you have no way of blocking them. You might be able to Shock one and survive another turn, but you’ll have no way to win. A better option, although it’s statistically terrible, is to Shock your opponent at end of turn and just hope you draw that Fireball.

Some people have noticed that my play with an aggro deck is surprisingly "timid," and the reason is that I’m thinking through different lines of play like this. What if my opponent has Mana Leak? It doesn’t seem very effective to just run a Strangleroot Geist into it, giving him the option of flashing it back with Snapcaster Mage in a couple turns. So I choose, instead, to play one or two Birds of Paradise and Llanowar Elves, knowing that next turn I’ll have the extra mana to pay for the Leak.

On the other hand, when playing against Andrew Cuneo’s U/W Control deck at GP Salt Lake City, I learned from a long and painful game 2 that he wasn’t actually playing any Mana Leaks. All of his counters were hard counters, so I played much more aggressively into them during game 3.

I hope that this article has gotten you thinking about your perceptions and how they stack up against reality. Knowing our limits can help us break them.

Next week will be Avacyn Restored Week at StarCityGames.com, so join me in taking a stab at this new format. Are you excited?