We’ve all had those drafts where one color is ungodly open, where everybody at the table wishes they moved into white as the cards were flying around the table later than ever. You know your deck would be much better if you had just thrown away a couple of cards early on and speculated on white. But you also have to draft your seat, and speculating on white may not have been correct for you.

Understanding when to stay open and when to commit is a crucial aspect to drafting. But it isn’t a one-way street. Once you cement yourself into an archetype, remember that you can back out. Most of the time you shouldn’t, but discerning when you should will earn percentage points.

Given the power level of most of the cards in any given Limited deck, you want to maximize the number of powerful cards you can get. This is one of the reasons that staying open and reading a table is so important to success in Limited. But evaluations of cards have to change based on the cards that you have drafted. Every card can be evaluated in the following way:

If you compare the value of every card in a pack in this manner, that should tell you what card to take. Unfortunately, the actual values and probabilities of the cards here are in flux, as you can’t be certain what other cards you’re going to get in the draft, so it’s not as easy as it seems.

Let’s take a look at a couple of examples.

You’re a U/W tempo deck and have no way to splash. You open your third pack and two cards jump out at you: 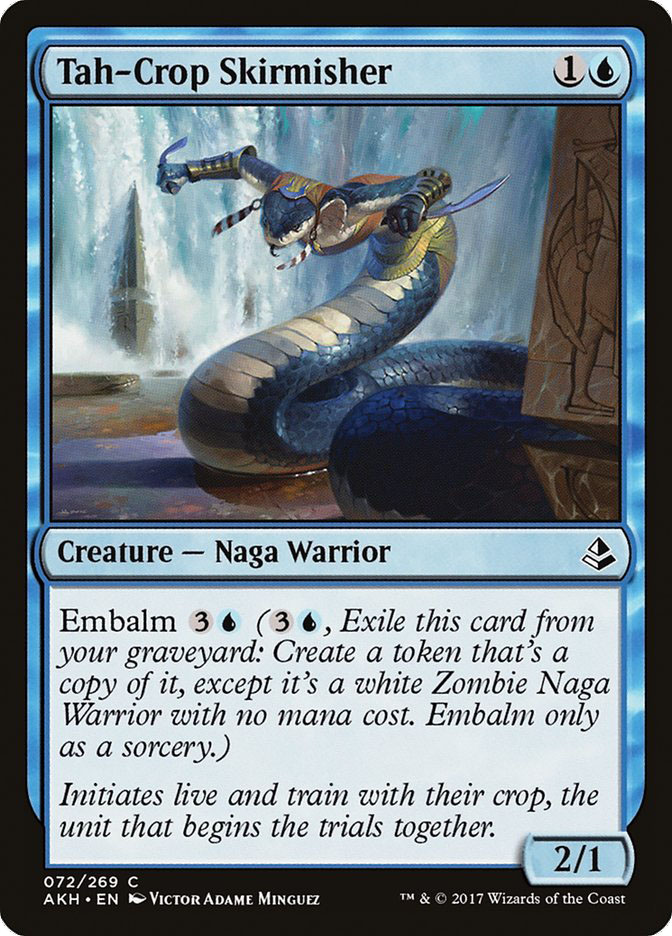 There is absolutely no chance that this Glorybringer makes your deck. Sorry, buddy, but that means the expected value is a womping zero! Just take the Tah-Crop Skirmisher and move on. You could argue for hate-drafting Glorybringer, but I don’t want to get into that. It has no value to you, and the Skirmisher does.

In fact, you should almost never switch colors in Pack 3. The only heuristic I can give you for looking to switch colors in Pack 3 is if you’re nearly mono-colored. For example, let’s say that, in the above example, you only had three or four blue cards. The probability that Glorybringer makes your deck is no longer zero, and it likely has a higher value than all of your blue cards combined.

It’s important to note that you aren’t tied down to red, though, as you only have one great card (that is also splashable) and two good ones. You open Pack 2 and see the following:

The two cards that jump out to me here are Kefnet’s Last Word and Puncturing Blow.

While Puncturing Blow is good, the card is clunky. In recent Limited sets, expensive, sorcery-speed removal hasn’t been great. Don’t get me wrong, because you play Puncturing Blow in all of your red decks, but it’s just not something to write home about.

Blur of Blades is replacement-level, and both Open Fire and Khenra Scrapper are good. But if you end up in blue, Market becomes a part of your deck. Since you’re only throwing away a couple of cards here to play a bomb rare, I think it’s worth taking. Maybe blue isn’t open and you move back towards W/R, but, all things considered, I think the value of Kefnet’s Last Word here is higher than that of Puncturing Blow.

Reading signals is a skill crucial to succeeding in Limited, as I wrote about last week, and doing it properly will allow you to capitalize when you switch colors. Let’s look at reading the table when you’ve already found a lane.

You’ve started with a U/R deck. While blue dried up quite early, the blue cards are good enough that this seat should probably be U/R, but it isn’t 100%. Here is Pack 2, Pick 2:

Ammit Eternal is better than every single uncommon in the set. If you take a close look at this pack, you’ll see than an uncommon is missing. This means that you can be near-certain that the person passing to you is not black.

Looking into this even further, you got a second-to-last-pick Wretched Camel in Pack 1. This suggests that the person to your right is also not black (although this signal is less clear). Additionally, blue wasn’t very open in Pack 1, which is even more the reason to take Ammit Eternal.

When you combine all of these additional data points, even though you’re drafting U/R, the probability that Ammit Eternal makes your deck isn’t that much lower than any of the blue or red cards in this pack. And since the power level is much higher, you should speculate on black here.