I think Gonti is overplayed because the effect feels so awesome. The Impulse effect means you almost always hit a good card to cast, and it’s their card you beat them with, which is always awesome. I’ll say the same things I said when the card was first released:

In the end, I think the first question is the important one; the last two are just to prove a point. If your ground blocker is going to be overwhelmed by Cryptbreaker, Gonti doesn’t matter. If it’s just going to be flown over by Skysovereign or Glorybringer, Gonti doesn’t matter. If they are making a giant Verdurous Gearhulk, then maybe Gonti matters. Play Gonti to beat B/G, not to beat Temur or Zombies.

This is the first mention in our chat of The Scarab God. If there was a single card I felt we undertested for the Pro Tour, that was it. To be fair, it is the kind of card that gets a lot better as the format bogs down and isn’t great when you have no idea what you are facing, but it’s still very powerful. A 5/5 is already hard to kill in the current metagame, and there isn’t much exile removal available. It runs away with the game on card and battlefield advantage, crushes the game through stalls, and is pretty much unstoppable in the long term given the removal people are currently playing.

This U/B Reanimator deck is similar to the one mentioned by Melissa DeTora in last week’s Play Design article with Ever After and giant creatures. We had a list of the deck in Pro Tour testing and it was merely okay. It did some powerful things, often involving Demon of Dark Schemes and Noxious Gearhulk, but it did not have a good early-game. You have some spot removal, but, similar to Ramp, you aren’t able to just ride forward and take games where your land curve isn’t perfect but your opponent doesn’t do stuff. Every win is the hard way, via some five- or six-drop. There’s no Tireless Tracker or Rogue Refiner or Longtusk Cub freeroll and that sucks.

The other cool team deck was Mono-White Eldrazi, championed by none other than Thought-Knot Seer connoisseur Ben Weitz. Seeing as he had been playing the deck since Pro Tour Kaladesh, I wasn’t shocked. A bunch of us tried this after Jonathan Job’s great start at Grand Prix Minneapolis with the deck, but none of us ended up playing it. I’m not exactly sure why. Maybe it was just a bit too midrange-y without some big catch-up effect such as Glorybringer or a good cheap answer like Abrade or Fatal Push. I know for a while we tested without Gideon, Ally of Zendikar and then determined you couldn’t beat control or Ramp without that kind of effect.

The question was really metagaming. What level would people be on? We thought that people would pull back from Red, but you still needed to manage it. B/G was just enough behind against Zombies to make people turn from it, and that mean Zombies was the deck to beat. It is just “Black Kithkin,” as Cedric said, so that was a very reasonable proposition.

I don’t think anyone pulled the trigger on trying it, but W/U Monument wasn’t out of the question. When I saw it in the Top 8 of Grand Prix Denver, I wasn’t surprised. If people were moving to creature decks and Abrade was becoming less important or prevalent, Monument was primed to slice through the metagame.

Likely due to the success we had with Zombies at Grand Prix Minneapolis, our first guess was to just keep playing it regardless. We were winning enough, and that let us try things. Again, The Scarab God came up. We put a lot of reps into the B/U Zombies list with Negates and The Scarab God, but it just turned out Liliana’s Mastery is too darn good. Negate is a nice addition, but it’s about a push in terms of how often the card matters versus how much your mana sucks when your Choked Estuary enters the battlefield tapped.

Also, every single real person in the 8/12 MOCS won a bunch with Mono-Black Zombies, including an 8-0 by Reid Duke.

As always, Alex has confidence everything is going to go swell.

Mark, providing useful scouting info both for the MOCS and for every tournament from 2003 until the end of time.

We did consider control. Not for long, but we did consider it. The U/W Approach deck that Dan Ward finished tenth with at Grand Prix Minneapolis looks cool, but it’s got some loose stuff going on. Aether Meltdown and Blessed Alliance is one. Doing nothing is another.

Cedric also makes a strong case for the minimum amount of “knowing what’s up” required to beat the deck.

Somewhere in the last week Temur suddenly became good against Zombies. This makes some sense if you just look back in time pre-Hour of Devastation, where Temur was the best Skysovereign, Consul Flagship deck. Again, back to the very top of this article, that is probably one of the hardest cards for Zombies to beat.

The weird part to me was that in Pro Tour testing Temur failed against both Red and Zombies, and somewhere along the line that changed. Was Whirler Virtuoso that much of a game-changer?

I think this is where the metagame flipped on us. It was so close to the event that it was hard to fully adjust, but a lot of what we had learned over the last couple of weeks was suddenly… not invalid, but less relevant. If Temur was good, a lot happened. It was much better against Ramp than past midrange decks because of Negate. It was apparently good against Red?

The cracks started really showing. People were stuck between trusting what they knew and trusting everything. If all of you premises are clearly upturned, it might even be easier to right yourself than maintain this half-and-half state.

I’m now kinda wondering if this is something you can actively watch for in playtesting. This definitely happens a lot, but how do you parse the times where it’s just last-second nonsense versus real concerns? Maybe the fact that Rob, one of the successful Zombies pilots, was one of the people discussing the very simple ways to beat Zombies should have been a clue. 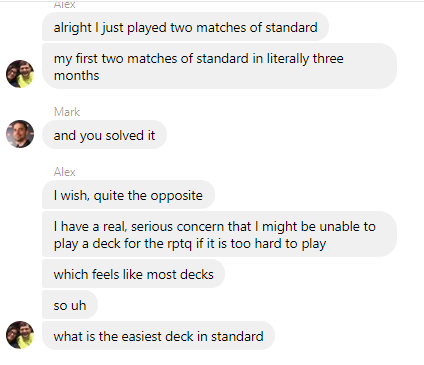 Okay, maybe there were some other motivating factors here. This may have been right after Alex attempted to Fatal Push a three drop after only his opponent’s stuff had died that turn.

Tuesday night is where I can pinpoint a shift in our direction. Everyone was just losing with Zombies to stuff. After we pick up Temur splashing The Scarab God, we just started winning. Honestly, at this point, that kind of shift is often good enough for me to just swap on over. 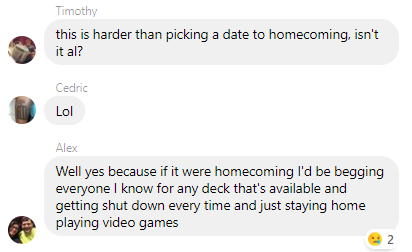 Okay, maybe not a shift in direction for Alex, but that’s not the point. When I asked if I could use the chat for an article reference, his stipulation was that I mention that “every deck in Standard is awful.” 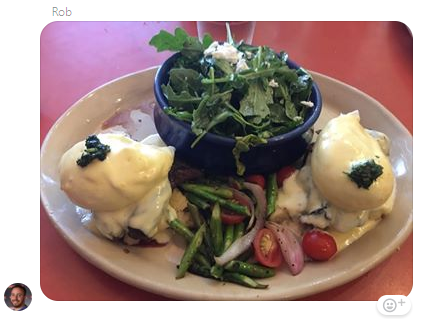 Obviously, once the event starts, the most important thing for the railbirds is brunch photos for them to admire.

How did everything turn out?

The Grand Prix didn’t go great. Ramp and Zombies didn’t have the greatest showings in a field topped by Temur, Ramunap Red, and Jeskai God-Pharaoh’s Gift. We hadn’t really put much stock in the U/R God-Pharaoh’s Gift decks despite Brennan DeCandio’s many praises of them, and it looks like they may have been one or two fixes away from something a lot more solid than the first draft. As for Ramunap Red, I really have no idea where that came from, and that’s something I have to answer before Grand Prix DC.

Unshockingly, Alex won his RPTQ with the above list. Really, who complains about all their deck options, says they almost want to skip the event, and then…

Who wants to hear about how I have no clue what to play at #GPDEN, and wish I wasn’t going anymore?

Honestly, this is just how events go. You read reports where everyone talks about their long plan, what happened, why decisions were made, but on a macro level, everyone is trying to dig as hard as possible for the answer before they run out of time. Sometimes that uncertainty up until the point you actually start playing is just lost in the framing. Not every event winner has everything locked in on Tuesday night.

Just keep jamming and trying to find something that wins. Maybe you won’t, but remember, it’s often a struggle for everyone.