The rate on this card has caught my eye. Sam Black went quite deep on heroic last week, and I was honestly shocked so few of his decks had it.

As a creature, the card isn’t very impressive. As far as I remember, Scion of the Wild made two trips through Standard without seeing play. The part I want to play with is the bestow half.

When Theros came out, I was excited about Nighthowler for similar reasons. Four mana is a decent cost for an immediate threat that lives through removal or a sweeper. The issue with Nighthowler was always that it failed in the first department. Too often it couldn’t just be cast to advance your board and acted as a Hidden Gibbons with the trigger of "your opponent plays a Supreme Verdict."

Eidolon of Countless Battles does this. It’s much worse after the sweeper hits, but it builds back fast. Any follow up you have is greatly magnified by it already being in play.

(Aside: On the bestow/heroic note, I also like Hero of Iroas, but it seems like it is one good bestow creature short between Eidolon and Boon Satyr. Sam also drove that one into the ground last week, so I’ll let it sit for a while). 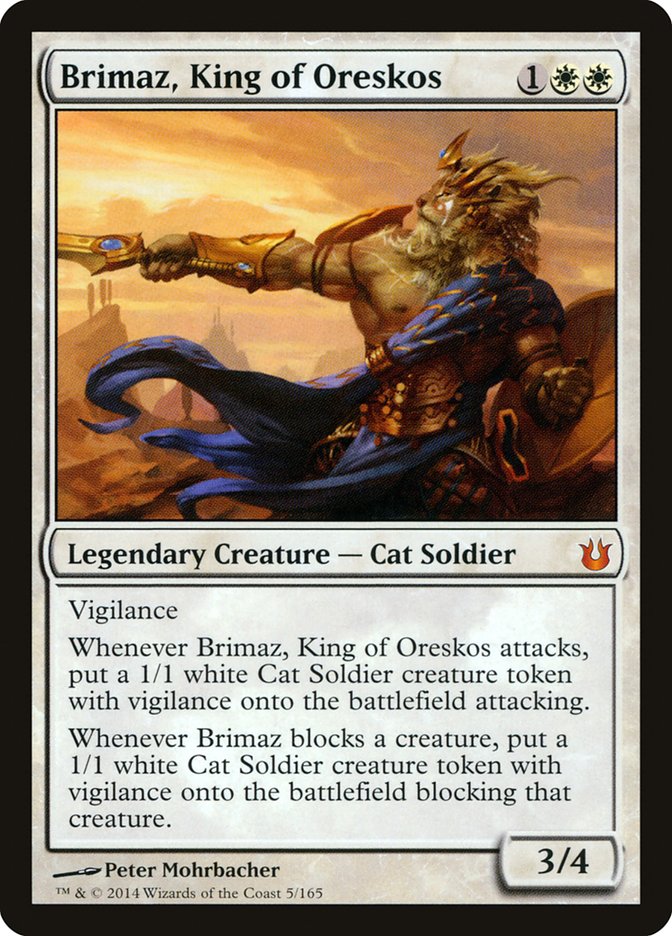 The most blatantly good card from this set also works well with Eidolon. Beyond the obvious "Brimaz grows Eidolon," Brimaz into Eidolon is a natural curve that protects the powerful mythic in combat.

Brimaz does a few huge things for white-based aggro. First off, it’s a fast single-card clock. In pre-Born of the Gods lists, almost every creature in aggressive white decks was a 2/x. Only Daring Skyjek presented a faster clock, and that isn’t a real improvement. At Grand Prix Shizuoka, we saw Shota Takao utilizing a heavy black mana base in his white aggro deck to access threats like Desecration Demon that are capable of winning the game unassisted. Brimaz ups the ante in a very relevant way, allowing you to take a game with just a single cheap white creature.

It’s possible that Brimaz could fit into the G/W Aggro shell, but right now those decks don’t play Loxodon Smiter. Their three-drops are Banisher Priest and Boon Satyr, both of which offer more than power and toughness. A different deck could exist that is all the biggest beaters, but there is definitely a reason for the list being the way it is now. 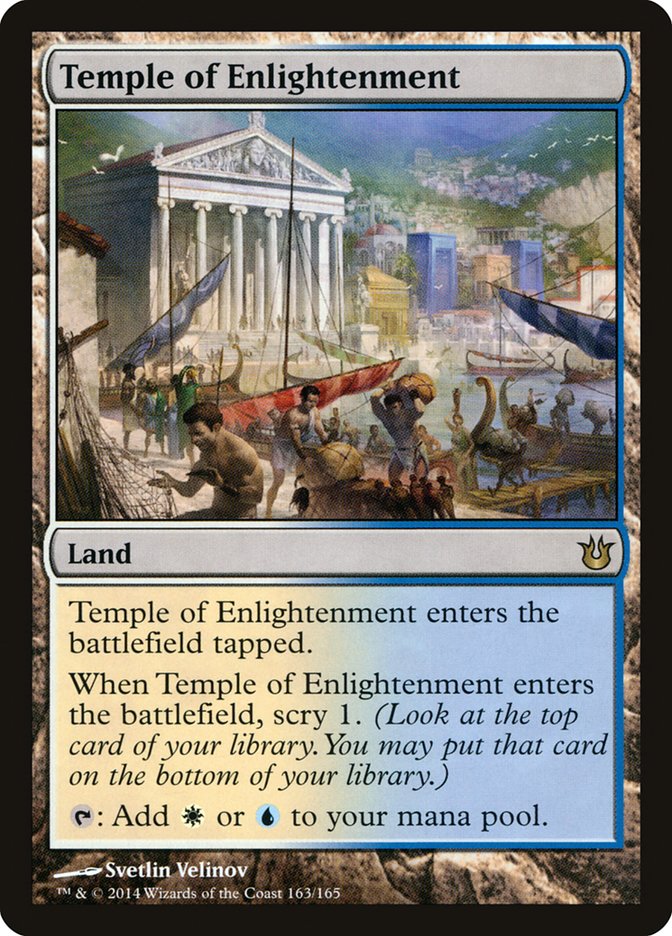 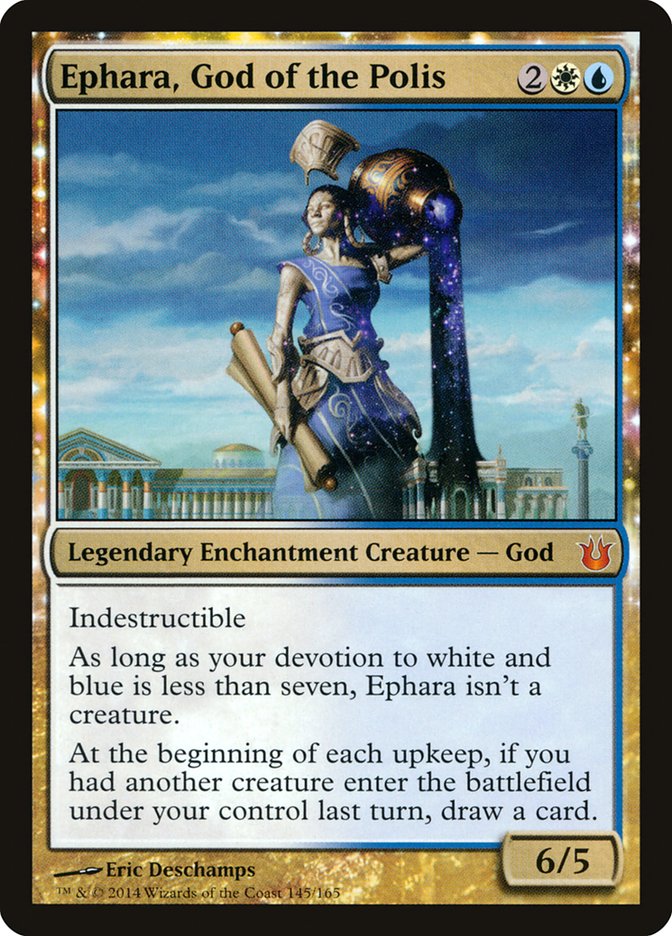 The final pieces of the puzzle.

Shota Takao’s deck has one other key element: a blue splash for removal that matters.

Red removal is not a valid option for white-based decks. While red-based decks can play enough Mountains for Chained to the Rocks, you can’t make that card work alongside Precinct Captain or really even multiple white one-drops. The actual red removal doesn’t kill Master of Waves unless overloaded, and there is no way a white-based aggro deck reliably makes 3RRR.

The black removal was almost good enough, but it had a fundamental flaw. On the draw, it made facing down a potential Pack Rat awkward at best. You have a ton of one-drops you want to cast to curve out against non-Rat hands, but you only have five untapped black sources. A decent chunk of the time you are forced to play a turn 1 Temple of Silence just so that their turn 2 Pack Rat can be killed on the spot. Note that this issue also applies to the red removal, but it’s secondary to the other problems there.

Last Breath is okay if you’re attacking with 4/4 Elephants and 5/5 Wurms. Not so much when all you have are some dorky 2/1s.

Detention Sphere is a unique effect here. Barring a Devour Flesh, it answers all the Pack Rats at all times. It kills Master of Waves. It kills Desecration Demon. It misses Blood Baron of Vizkopa, but hopefully by five mana you have set up for a Brave the Elements.

Shota’s black splash allowed him to support Sphere and other blue spells off of shock lands and scry lands. With the printing of Temple of Enlightenment, pure W/U Aggro can have similarly good mana.

Ephara, God of the Polis is another nice bonus from blue mana. Removing black from this deck costs you Xathrid Necromancer, a key aspect of how the deck fights U/W Control. Ephara operates in a similar fashion to Bident of Thassa out of Mono-Blue Devotion, allowing you to overrun the control deck’s answers simply by failing to run out of threats. It might turn out to be too expensive or just a sideboard card, but it’s worth a try in the maindeck to start.

Eidolon of Countless Battles is not super synergistic with Brave the Elements if you’re facing down white blockers. It remains around to attack, but it doesn’t have the protection your other guys have. Not currently a huge issue, but it could be if Brimaz takes off.

Imposing Sovereign is especially brutal with Brimaz because the extra attack just means more. Judge’s Familiar also gets better since one of your guys is actually worth protecting relative to the rest of them, though it’s still not the best against the current removal spread. It also picks up an Eidolon and bashes hard with evasion.

Building this deck, I’m realizing that trading out black comes at a significant cost to the sideboard. In both the B/W and Esper Humans lists, almost the entire sideboard consists of black cards. The Supreme Verdict plus Archangel plan is a nice trump in aggro mirrors, but it’s not nearly as flexible as Thoughtseize or Doom Blade.

The counter split in the board is quite arbitrary. Syncopate is a bit of a catchall and is likely better as one of the other two options.

Two maindeck Epharas is likely pushing it, but playing it safe doesn’t help us learn if that is or isn’t true.

I’m trying to avoid pushing heroic synergies here. If you want to focus on Ethereal Armor, you should go all in. This deck just wants to be generic white beats and not have issues if Mono-Black Devotion moves back to Ultimate Price or Doom Blade. 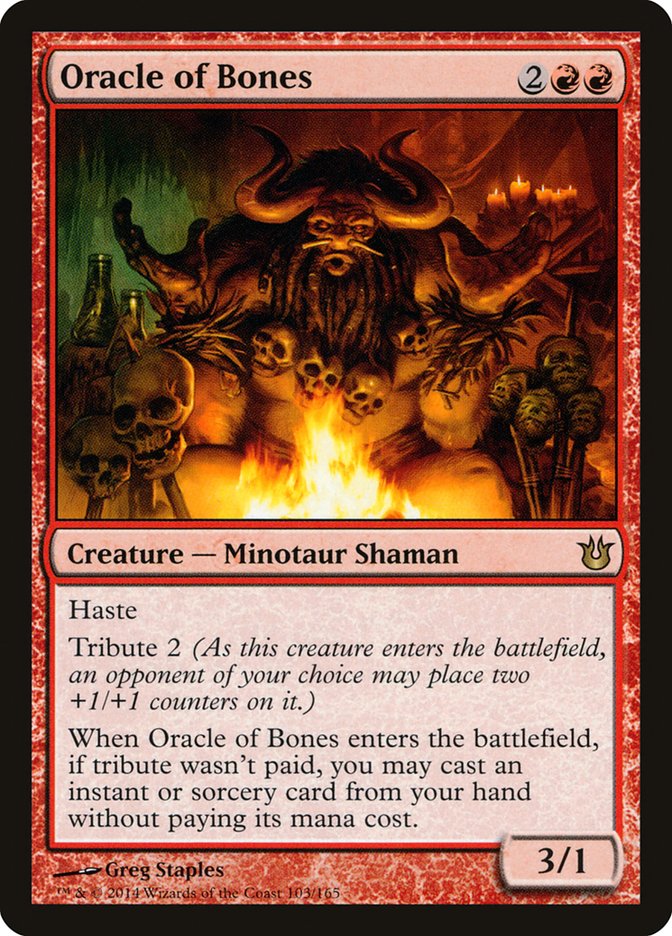 I know that tribute should be a terrible mechanic, but this guy is kind of interesting when paired with cards like Warleader’s Helix that are reasonable to cast but also reasonable to freeroll. I would not be shocked if a copy or two finds its way into a Burn deck, especially with the other addition from Born of the Gods. 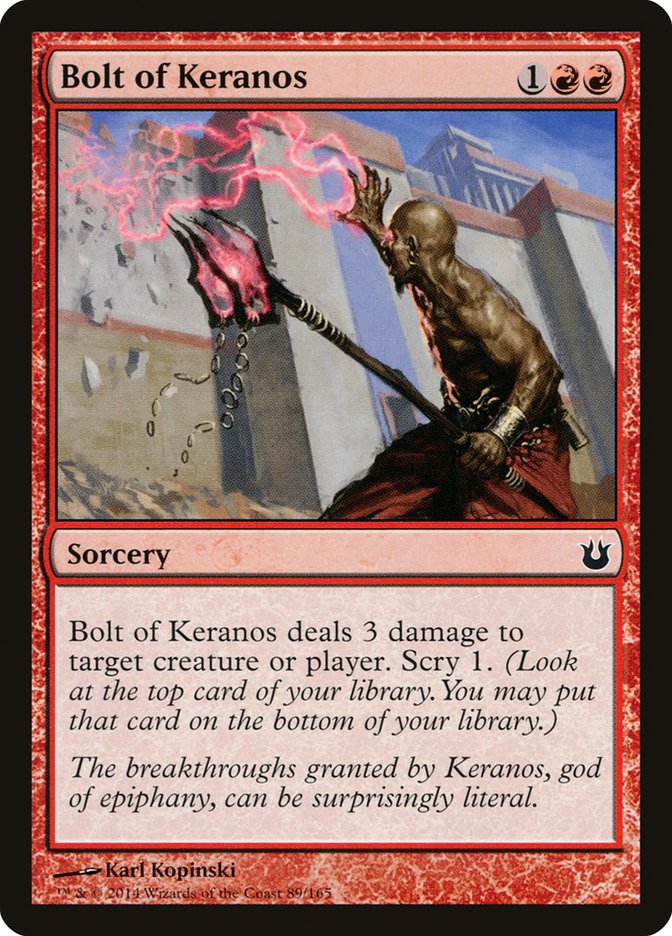 It’s not the greatest exchange rate of mana to damage, but it will do. As evidenced by Magma Jet, scry is a big deal. Scry 1 is enough value for me to want to play some number of this card even without the potential value from Oracle of Bones.

Extrapolating from the current Burn lists, we get the following:

Not a significant change to what previously existed, but definitely some good new tools to look at.

(In retrospect, I’m not sure why I like this guy more than Flame-Wreathed Phoenix. It might be that he is a bit better in a pure race scenario, but I don’t know if that will actually be a common occurrence. Maybe you should just play the flier instead.) 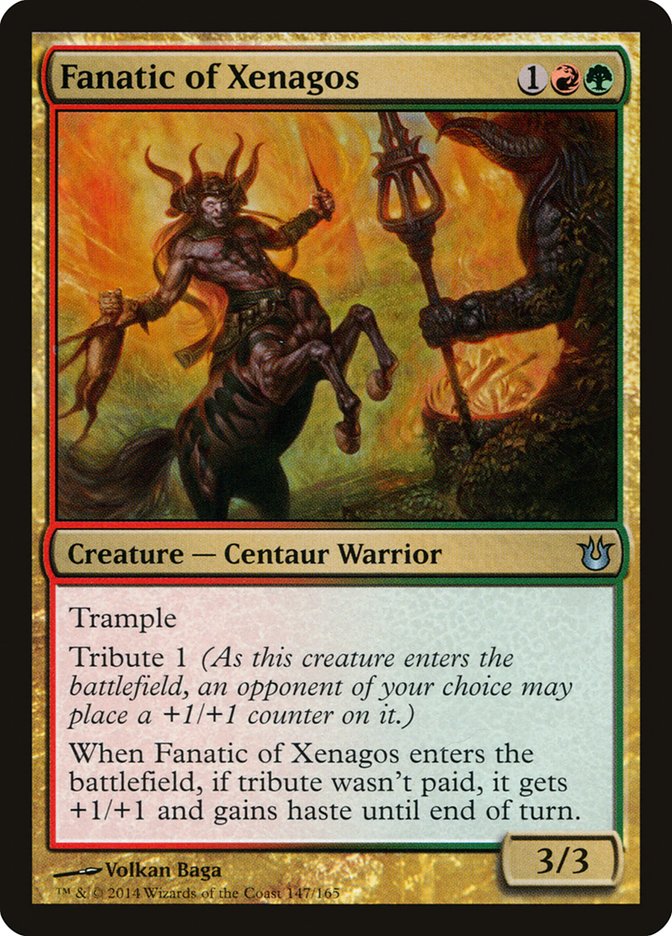 In my team’s testing for Pro Tour Theros, we really liked an aggressive G/R Monsters variant featuring Reverent Hunter. Reverent Hunter wasn’t great, but it did the job of being a three-drop with a relevant amount of power and toughness. At least it did in games where you had a one- or two-drop.

Fanatic of Xenagos fills the role without the conditional part. It’s also actually good to ramp into with an Elvish Mystic. It’s not quite Loxodon Smiter, but it’s as close as you’ll get for now.

I didn’t list a sideboard since none of the new options are especially exciting. Searing Blood is difficult to cast, and I would rather have Destructive Revelry than Unravel the Aether.

I don’t know how many Xenagos, God of Revels is correct. You may want to start off by trying more, especially with eight trample creatures in the maindeck.

On the earlier note of Reverent Hunter, I’m not above playing Centaur Swordsmith. A worse Kalonian Tusker is still most of a Kalonian Tusker when you’re just trying to build a 2G 4/4 or better. That deck is absolutely miserable at killing a Pack Rat though. 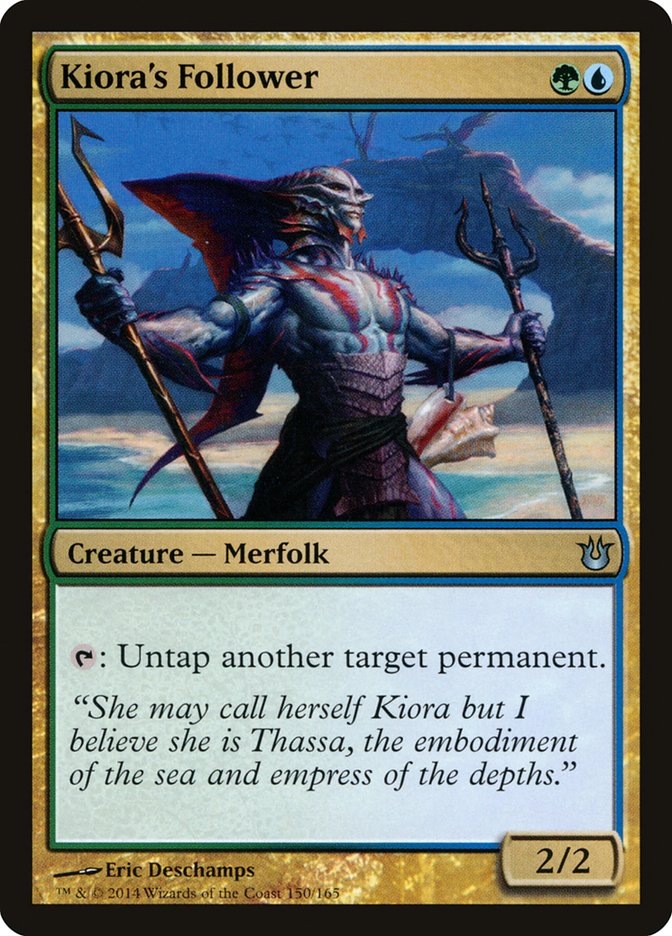 If any card in the new set creates a brand-new archetype or empowers a marginal one, it will be this one.

Mana guys that can attack have historically been phenomenal. Obviously this isn’t quite Deathrite Shaman or Noble Hierarch, but Lotus Cobra and even Nest Invader put in their hours back in Standard. Just the jump from one to two power makes a huge difference. Follower has an even bigger combat bonus thanks to being able to give effective vigilance to more relevant bodies when a 2/2 just doesn’t cut it.

That said, I don’t think Kiora is the card to pair this with. Kiora feels like a Jace, Architect of Thought to me—okay in aggro or midrange, but much better when it’s forcing your opponent to overextend into Supreme Verdict. On the proactive front, Jace trumps it if you can make double blue since it’s just better at drawing cards.

That said, Reid Duke already said way more than I can on the subject a couple weeks ago, so if you are interested in going down this road take it from him. If you want the summary version of the article, here is the list he posted.

I think only two Detention Spheres is a little shy of where I would be, but the rest looks like a fine start. 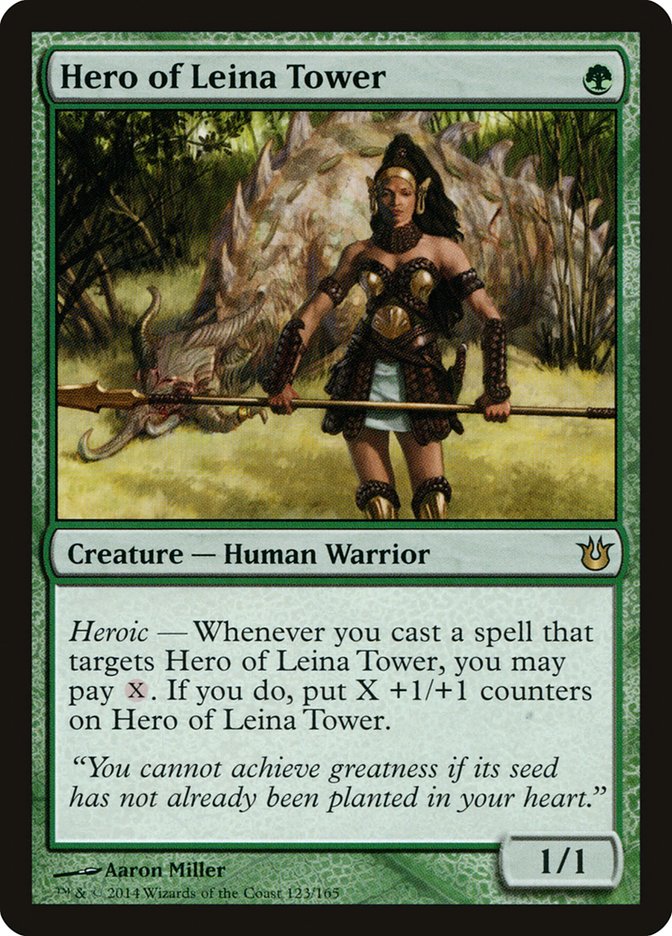 The time and place for this guy is not now, but this card is a really powerful mana sink. It’s not quite Figure of Destiny, but with enough good one- or two-mana heroic enablers, I wouldn’t be shocked if it saw play in a smaller format like Block or post-rotation Standard. 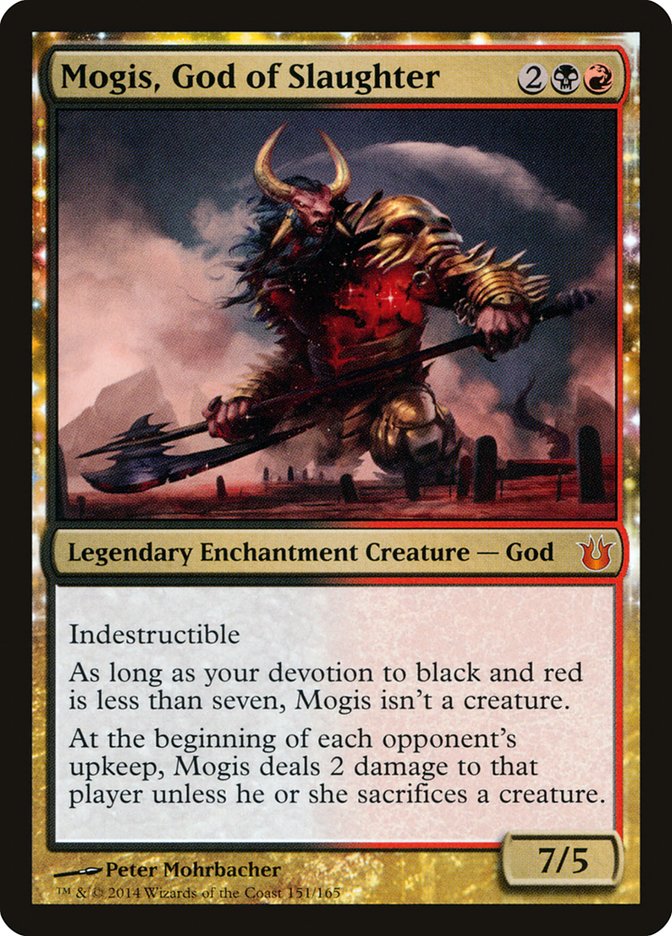 I don’t have enough riding on the upcoming Standard format to have tested this guy, but in my experience with black decks and B/R decks in this format, the current hype around it makes absolutely no sense.

If you have seven devotion in a black and red deck, you probably should have won.

If you have seven devotion in B/R, why aren’t they dead to Rats, Demons, or Merchants?

If you have seven devotion in R/B, why isn’t Mogis, God of Slaughter just Fanatic of Mogis or Purphoros, God of the Forge, which do way more when they aren’t active?

I’m simply not seeing it. Ephara at least does something unique and can rectify board states when inactive. Mogis is just a win-more punisher card. Both are bad.

If you think Born of the Gods isn’t that impressive, just remember that small sets don’t generally change the format in dramatic ways. It’s maybe 50/50, and we’ve been spoiled with back-to-back years of only one small set. Some cards will make waves; most won’t. Most decks won’t change much, one to two will, and in turn those changes will cascade down the line.