Theros is here! Oh who am I kidding; you don’t really wanna hear about that. I bet you’d much rather check out my fantasy football team!

Maybe you don’t know who a lot of these guys are—I didn’t about three weeks ago. I never followed football more than casually, but when my good buddy asked me to join the league, who was I to say no. Now I’ve got fifteen favorite players!

One of the most enjoyable things about the league so far has been fishing for those sleepers.

Everyone knows the stars; they fight for the stars on draft day and pray they live up to their expectations. But the people who often win their leagues are the ones who do the research and pick up the sleeper who suddenly wakes up and takes them to glory.

Take wide receiver Eddie Royal. I fished a bit, did some research, and picked him up last week as a nice speculation pick. This week he put up 27 points from my bench and was the second highest-scoring WR in the league. Awesome! Will he continue to put up such big points? We will find out when he makes the team next week!

Okay okay, I guess we can talk about Magic, and I won’t mention how I am 2-0 in my league and absolutely crushed this week with 135.50 points—the most in the league. Oops! There I go again. Please, Cedric, don’t fire me! [Editor’s Note: I’m in seven fantasy football leagues, Jim. You’re doing just fine.]

So yeah, let’s take a look at some sleeper cards from Theros that look like they might make an impact! Some of these are a little less flashy than the Gods or other crazy mythics, but not every card is going to be Adrian Peterson. After all, Tarmogoyf was a $3 card when Future Sight first came out, and nobody respected Boros Reckoner or countless other sleepers either. 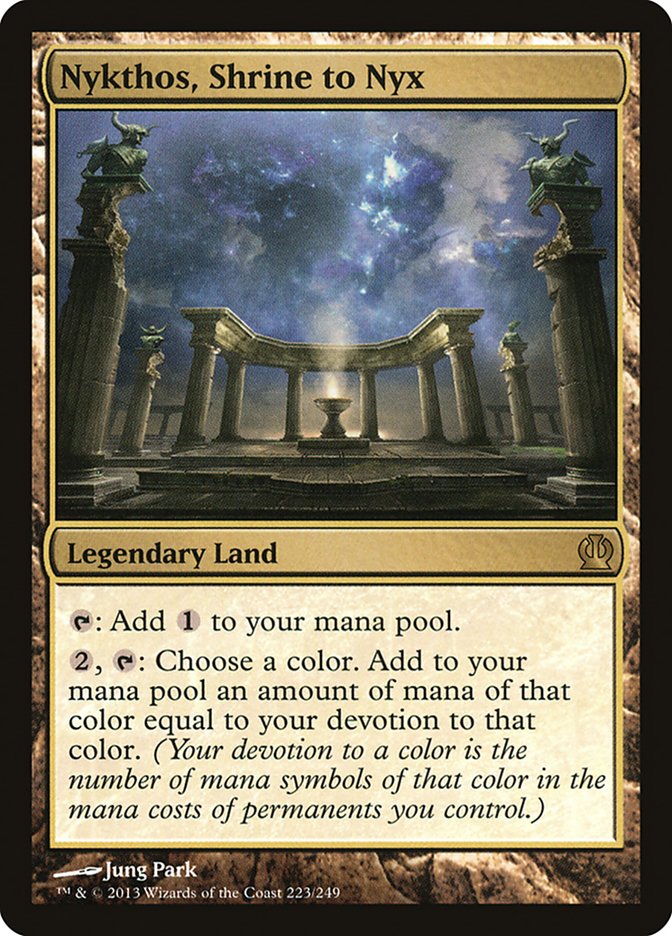 This is a card that I feel has gotten very little attention so far that mimics the effect of a very powerful older card called Cabal Coffers. 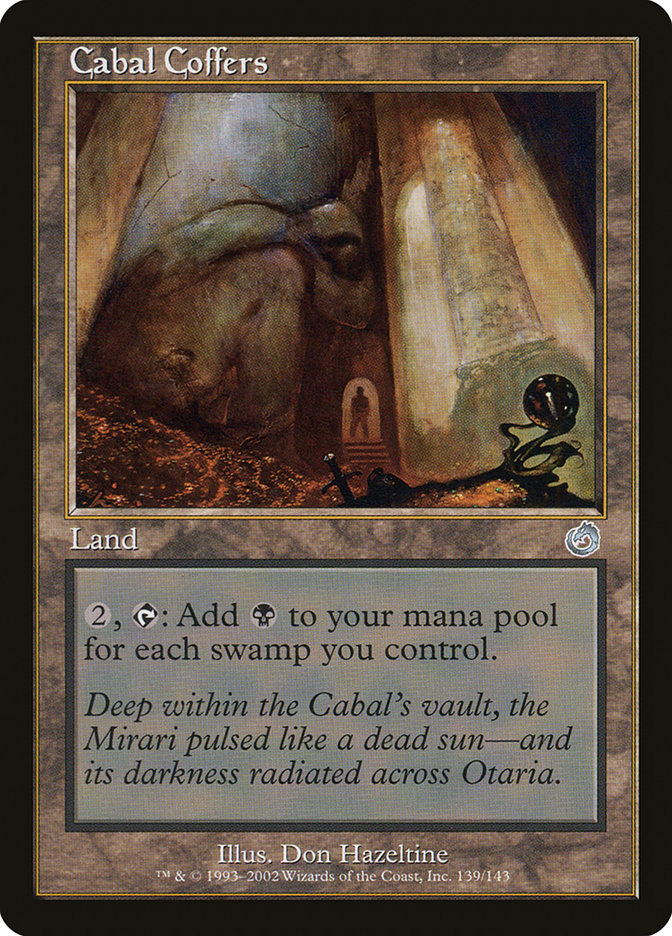 While it’s definitely less difficult to have a bunch of Swamps in play than a fairly large number of permanents of the same color, Nykthos, Shrine to Nyx has a number of advantages going for it that Cabal Coffers does not while also offering the sweet payoff of a land that can tap for more than one mana.

Firstly, Nykthos, Shrine to Nyx taps for mana by itself. I can’t even begin to stress how important this is compared to Cabal Coffers and other extra-mana lands like Gaea’s Cradle and Temple of the False God. The worst-case scenario Nykthos is simply a colorless land, much in the same vein as a Ghost Quarter or an unneeded Cavern of Souls.

This means that the opportunity cost of putting Nykthos into your deck is very low—unless you have extremely stringent mana requirements, it’s never really going to hurt you that bad. You will never end up with a hand of two Swamps and two Cabal Coffers and never be able to play any spells or a hand of six mana elves and one Gaea’s Cradle and have to mulligan.

In fact, the only real opportunity cost you pay from playing Nykthos, Shrine to Nyx in a deck where it’s not going to mess up the mana base is that you are not playing Mutavault.

The other benefit over Cabal Coffers is that Nykthos, Shrine to Nyx is not confined to a single color like Cabal Coffers is. I’ve been brainstorming ideas for ways to use it, and there seem to be various ways over various colors.

Maybe its best fit is in some sort of green big-mana deck full of mana dorks and other mana sources? Maybe in an aggressive red deck full of Burning-Tree Emissarys and Boros Reckoners to power up some monstrosity effects? Maybe in some sort of white board-control deck that uses white enchantments, which stay in play to help pump up devotion, and you can use it to fuel huge Sphinx’s Revelations?

Honestly, I’m not really sure yet. I just know I see a land that can tap for more than one mana—perhaps a lot more—that has a very low opportunity cost to play, and that stands out to me. 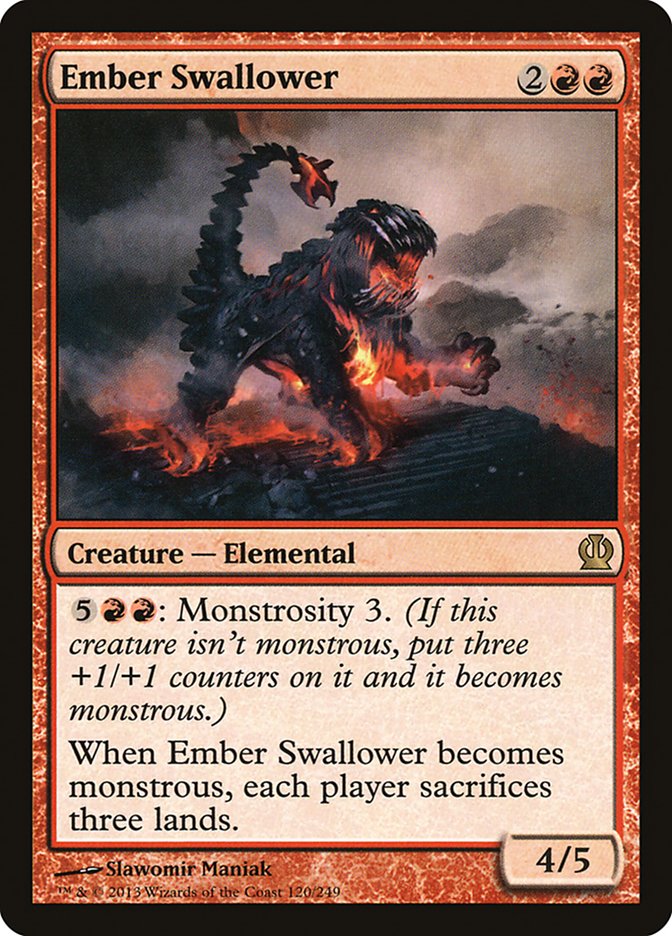 Speaking of fueling monstrosity, this is also a card I can see doing some damage—but for different reasons.

Remember in the last few articles where we talked about how important the context of a format is? Ember Swallower is the poster child for that in this set. Many of the best red four-drops have just rotated, Hellrider and Falkenrath Aristocrat being the most notable. The best removal spells either kill a creature outright or deal three (Lightning Strike, Anger of the Gods) or four (Mizzium Mortars, Warleader’s Helix) damage. Ember Swallower dodges those quite well while also being big enough to rumble with most of the best ground-pounders in the format, including Loxodon Smiter—whose specialty is being bigger than everything around him.

This makes Ember Swallower’s body pretty special, but its ability is also not something to be ignored. This sort of mana denial is not something Standard has seen for a long time. Aside from Burning Earth, there is no card that will punish someone’s mana base, nor has there been for some time. Now it’s possible to be activating Ember Swallower’s ability on turn 5 and attacking your opponent with a huge 7/8 while they sit on three lands and wonder what they are going to do with all the Aetherlings and Sphinx’s Revelations in their hand.

How are we activating monstrosity on turn 5? Well, there’s the old-fashioned way with some mana dorks/green ramp—or may I suggest Nykthos, Shrine to Nyx?

This deck could easily monstrosity Ember Swallower on turn 5 with mana to spare using just a normal draw and a Nykthos, Shrine to Nyx activation, and that’s without putting in a bunch of effort. You can also spend the extra mana to overload Mizzium Mortars, monstrosity Stormbreath Dragon, or just cast a bunch of stuff off Chandra, Pyromaster.

Again, while I’m not quite sure where Ember Swallower goes, I see potential. 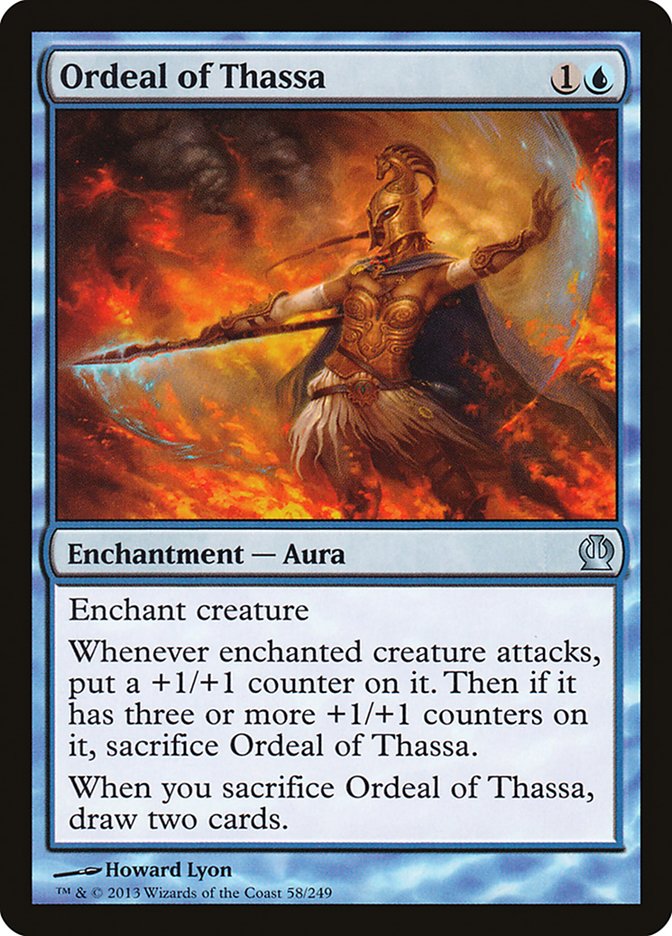 At first glance, the Ordeals seem like reasonable Limited cards—they can help trigger heroic, offer reasonable payoffs, and will help break through stalls. For Constructed, however, three turns is far too long to wait for such a small payoff.

Well, what if I told you the payoff was immediate?

Look any better? I thought so.

This of course leads us to two major questions:

1. Is Ordeal of Awesomeness a playable card?
2. Is there a deck where the creatures already have a bunch of counters on them?

I think the first answer is yes, as long as there aren’t too many Azorius Charms in the format.

The second is harder to answer because this card requires a shell that is good enough to compete—you can’t just throw it into any deck. Immediately some sort of U/G Evolve deck comes to mind:

Whereas the last update was fairly simple—I just added Ember Swallower; Stormbreath Dragon; and Nykthos, Shrine to Nyx into an already proven Big Red shell—this deck clearly needs to be taken a bit more cautiously since it may simply be awful. There is no current deck like this experiencing any success at the moment, so it may be the cards simply aren’t there for it. However, it is something very interesting to think about.

Those were the big three cards that caught my interest, but there are definitely more that I have my eye on.

I think this card is going to a very important one in the new Standard format for one hugely important reason: 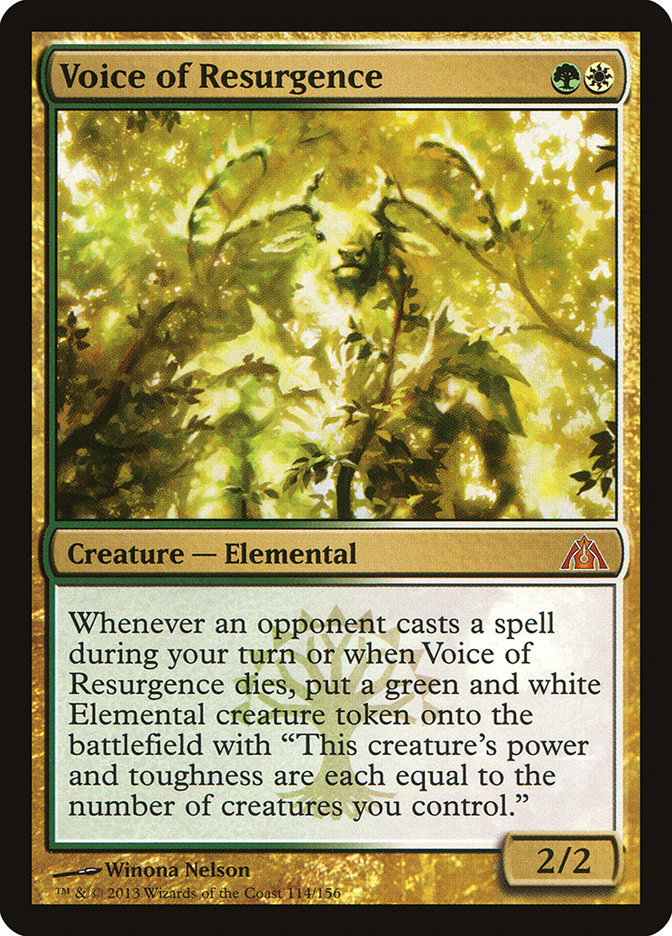 While Slagstorm was always a solid, playable card, it was just the Firespout it needed to be. What makes Anger of the Gods a much more important card is that it is one of the few cards in the format that can cleanly answer a Voice of Resurgence while also being a perfectly playable card in its own right. I know I keep repeating myself about this, but I don’t think you are all ready for a world where there is no Pillar of Flame to keep Voice of Resurgence in check. Anger of the Gods will go a long way toward doing just that. 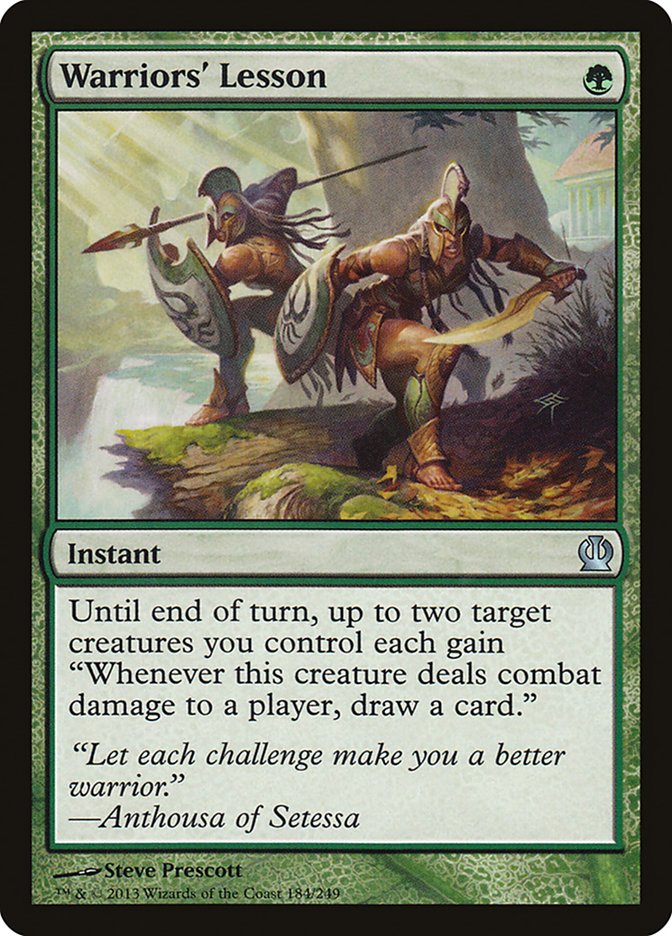 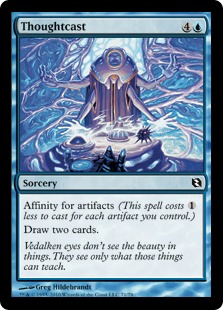 This card interests me. Wizards has printed numerous cards like this before, and they are almost always awful. However, they have never been this aggressively costed or effective.

This is another card, like Ordeal of Thassa, that certainly needs a deck behind it to make it work, but in the right formats, I can see this card doing a very reasonable Thoughtcast impression. The fact that it’s also a great heroic enabler is very nice as well. Is it a risky sleeper pick? Definitely, but I think the payoff is worth it. 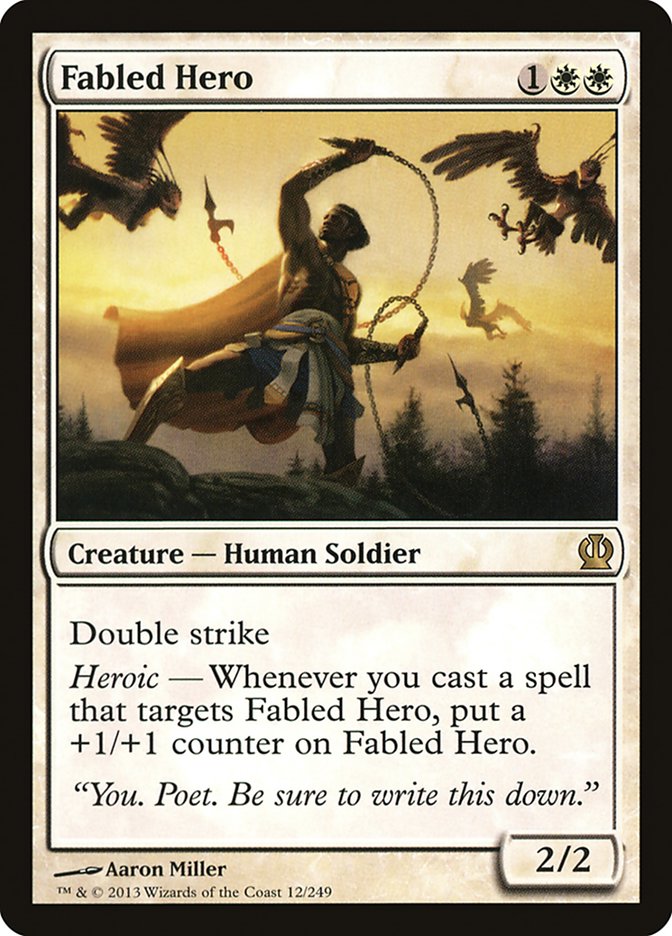 While this card looks very familiar, it has never been printed so cleanly before. It looks so unassuming, but it’s easy to forget how powerful double strike really is. Remember all those really annoying poison decks? Yeah, poison is basically double strike.

Is Enlarge a playable Standard card? Probably not, but even just a Giant Growth on this guy deals twelve damage, which is something that needs to be respected. I can’t really imagine any deck without removal or relying on red removal to ever beat this card enchanted with an Unflinching Courage in a million years 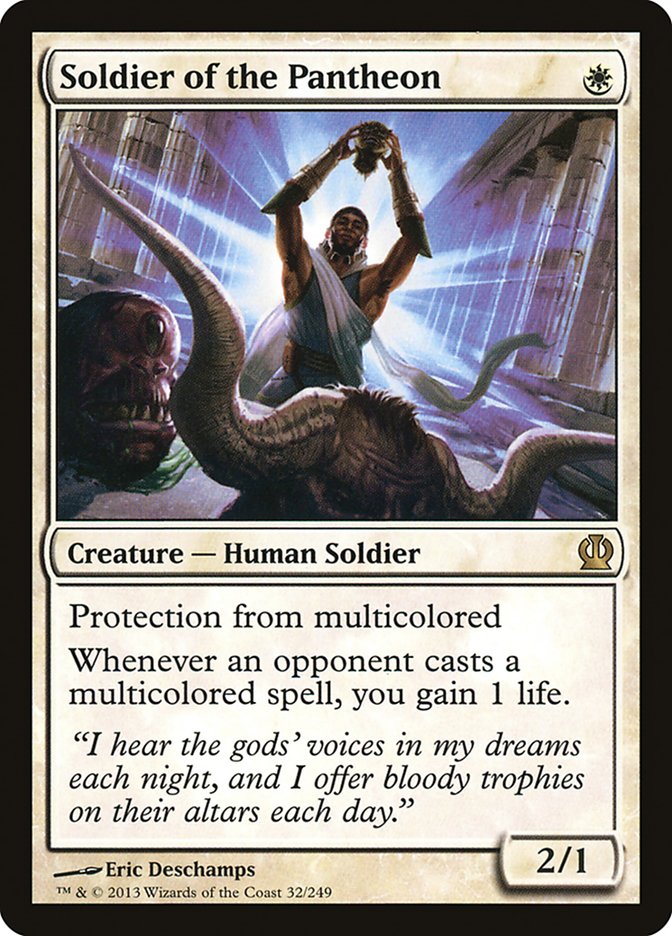 I know this card has had some good press already, but I just want to be on record as saying this card is the real deal for any deck that needs a solid one-drop. The list of cards it can either walk right through or block forever is really rather extensive, and Elite Vanguard was already teetering on the edge of playability. Here’s a quick list; I’m sure I’m missing a bunch:

Overall this is a very interesting set, and I’m looking forward to seeing where Standard ends up. There are plenty of new cards and brew ideas to talk about, and the next episode of So You Think You Can Brew? is coming up soon featuring all new Theros brews! Can Gary Fingers defend his title for a third straight episode? We will see!