Hello, StarCityGames.com reader! It has been a while since I wrote an article about Magic—about six months in fact! Interestingly enough, that is about the amount of time between the last StarCityGames.com Open Series event on the West Coast (Seattle, April 20-21) and the one coming up this weekend (Seattle, October 18-19). If you have really, really good memory, you might recall that I piloted Dark Maverick to a second-place finish at the last Legacy Open in Seattle, losing to Bryan Eleyet in the finals.

Maverick has been quiet for most of 2013, and save my second-place finish and Jack Wang’s victory in Philadelphia, we haven’t heard much from the green and white creatures. However, especially considering that I won’t be able to play in the upcoming Oakland and Los Angeles Open weekends, I’m going to do my best to change that this weekend. What that means for you is that I’m going to share everything I’ve learned from playing the deck on Magic Online for the past six months.

In case you guys don’t know, I love Legacy over all other formats and try to promote it whenever possible. I’m not going to go on about why I love Legacy (if you’re reading this article, you are probably at least intrigued by the format) or why I think that it’s better than other formats, but one of the massive undeniable downsides of Legacy is that opportunities to play in events are few and far in between. Leading up to the last Legacy Open in Seattle, my preparations were limited to approximately one event per month, yet I still considered myself a "Legacy specialist."

So, like any sensible Magic player that wants to play more Magic, I used a large part of my Seattle winnings to go ahead and build Dark Maverick on Magic Online.

Aside: If you have been active on Magic Online for a while, you probably know that as of six months ago Legacy events would never fire. Maybe once a week or maybe when the MOCS format was Legacy, you would see a Daily Event pop up on the Magic Online "What’s Happening?" page, but generally speaking sitting in a Legacy Scheduled Event queue was a waste of your time. Then, sometime around June/July, Legacy events started firing more and more frequently. Fortunately (very, very fortunately), this encouraged more players to play in Legacy events, creating a positive feedback loop resulting in Legacy events firing even more frequently. Nowadays, you can count on Legacy events to fire, and the average number of players has approximately doubled. It’s awesome!

Once I had the ability to play on Magic Online, it was like a whole new world had opened up to me. Four-round Legacy events every day twice a day! I could finally cast Green Sun’s Zenith on every day of the week (take that, Modern ban list!). More importantly, this presented opportunities to hone my list and try out different builds rather than blindly theorycrafting before each tournament.

I started off with something similar to the list I played in Seattle:

If you’re interested in how I came to this list, I wrote an article about it here. Here’s what I learned right off the bat: 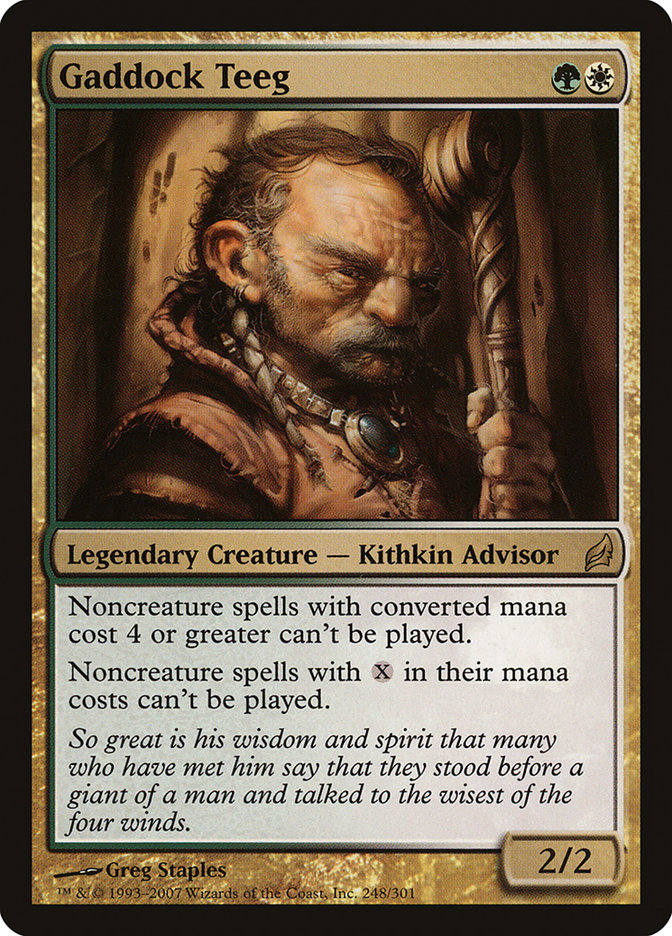 "Did somebody say my name?"

Legacy decks seem to have a lot of trouble against this guy. Ad Nauseam Tendrils, The Epic Storm, Miracles, and High Tide are all almost completely neutered with Gaddock Teeg on the field. Elves and Omni-Tell are slowed down significantly, and he protects against Massacre and Submerge out of the sideboard. Unfortunately, he also shuts off Green Sun’s Zenith, but when Gaddock Teeg is good, sometimes you don’t need other creatures. I quickly added in a second Gaddock Teeg at the expense of the fourth Knight of the Reliquary because . . .

Knight of the Reliquary is Really Bad Against Deathrite Shaman

Somehow it never occurred to me that Scryb Ranger was a throwback to Quirion Ranger and that they have the same activated ability. Swapping out Scryb Ranger for Quirion Ranger was an easy decision for me, even if the ability to block Delver of Secrets is a significant boon for Scryb Ranger. Situations arise in which one of the Rangers is the best target for Green Sun’s Zenith, and the one-mana difference between them can be vital.

This one really confused me at first. Maverick was established as a top-tier deck when the other top decks were Stoneblade and RUG, and Maverick simply had the best fair game in town. However, when I started playing on Magic Online, I noticed that I was crushing the combo matchups, while most of my losses came to fair decks. How could that be?

Here’s my theory. The two combo decks that were prevalent when Maverick started fading from the metagame were Sneak and Show and Reanimator (due to the printing of Griselbrand). Two things happened. Deathrite Shaman was printed, vastly improving the Reanimator matchup (#bandeathrite), and Show and Tell players started moving toward the Mono-Blue Omni-Tell lists.

Maverick actually has more game against Omni-Tell because the combo takes longer to set up and some combination of Qasali Pridemage; Gaddock Teeg; Ethersworn Canonist; and Thalia, Guardian of Thraben stops the combo, all of which can be put in with Show and Tell. Dream Halls is a way to circumvent this problem for the Omni-Tell player but runs into the same problems if you already have one or more hate bears out. Sneak and Show is still a bad matchup, but it’s also not as popular as it once was.

Here’s a list of how I think Maverick matches up to some of the common decks in Legacy:

The takeaway from this list is that Maverick still smashes a good part of the metagame but fast combo, Deathrite Shaman decks, and Miracles are problematic. There isn’t a whole lot you can do about fast combo with Maverick, but I wasn’t too happy about losing to Deathrite Shaman all the time. I needed to find some way to keep up with the Shardless BUG deck’s Ancestral Visions and Deathrite Shamans. 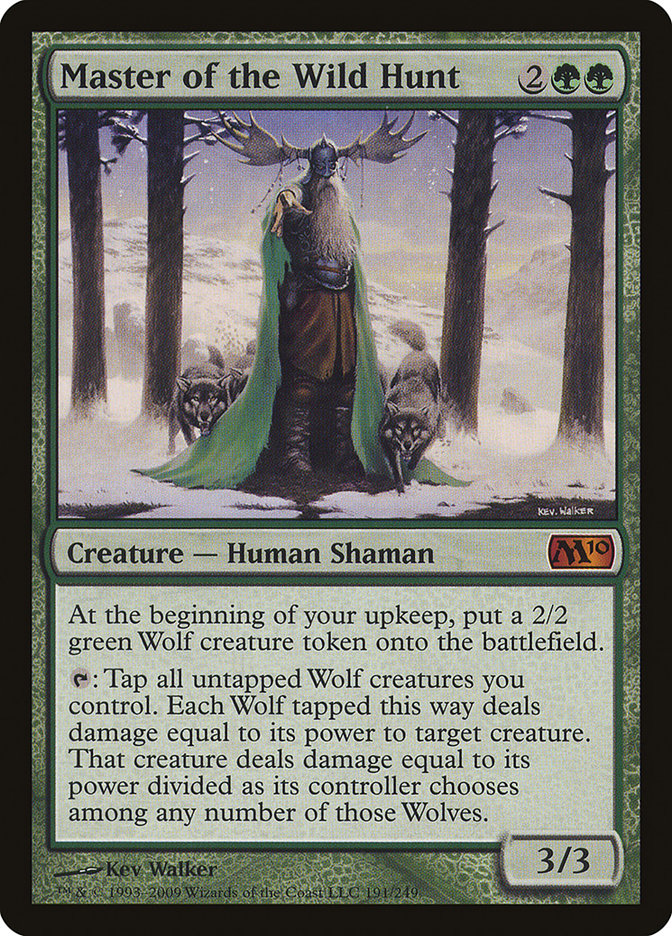 After a long Gatherer search, I decided to put one Master of the Wild Hunt in my sideboard. It serves as a Green Sun’s Zenithable threat that doesn’t die to Abrupt Decay while terrorizing opposing Deathrite Shamans. I’m not going to say that it’s the golden savior we’ve all been waiting for to liberate us from the tyranny of Deathrite Shaman, but it does good work.

The only way most Shardless BUG decks have to deal with Master of the Wild Hunt is to use Liliana of the Veil’s edict ability, and even then there is a good shot you have another creature to sacrifice as fodder (they usually don’t keep in Jace, the Mind Sculptor). A pretty common situation against the Shardless BUG deck is for the board to be even while the Shardless BUG player has an Ancestral Vision ticking down. Master of the Wild Hunt breaks the stalemate in that situation, allowing your board to progress while eating up any Deathrite Shamans lingering about.

I have a friend, Brandon Chang, who takes great pride in his Maverick deck, which he calls "The 62 Special."*** I decided to ask him about it so that I could try it out. Here’s the list he sent me:

There are some . . . interesting things going on here. Perhaps the most important is the presence of Gaea’s Cradle, allowing for bigger Green Sun’s Zeniths to go find Sigarda, Host of Herons and Captain Sisay. In a game of attrition, Sigarda is very difficult to deal with, and Captain Sisay casts Time of Need every turn. I decided to use some influence from The 62 Special and add my own touches and ended up with this:

As it turns out, you can use Captain Sisay to find both Mangara of Corondor and Karakas, and if you have Quirion Ranger out, you can do both in one turn.**** Mangara is definitely too slow for this deck, however, since you can’t use Aether Vial to cheat on mana while performing the "exile your permanent, hold priority, Karakas targeting Mangara" trick. I played around with straight G/W builds featuring Captain Sisay for a while, and these are the conclusions I drew:

Straight G/W builds were significantly stronger against fair decks, but my win rate against basically any combo plummeted. Furthermore, access to Abrupt Decay is so important against the ubiquitous Delver of Secrets that I don’t want to leave home without my Bayous. Switching back to G/W/B, I learned a few more things:

If you’re planning on playing Dark Maverick in the near future, here are the cards you should definitely register in your maindeck:

Cards you should definitely register in your sideboard:

Cards you should definitely register in your 75:

1 Master of the Wild Hunt
1 Elspeth, Knight-Errant
Qasali Pridemage #2
1 Sigarda, Host of Herons (if and only if you are playing Gaea’s Cradle)

Counting the Sigarda, that’s a total of 70 cards. The rest is up for debate and currently under scrutiny; right now I have a third Knight of the Reliquary, a third Stoneforge Mystic and accompanying Equipment, a second Sylvan Library in the sideboard as a concession to the popularity of Miracles on Magic Online, and one slot that keeps fluctuating.

If you’re ever interested in watching Dark Maverick in action, follow my stream at www.twitch.tv/Sunyveil! I try to stream Legacy events at least three times a week, and I’m happy to debate about deck and sideboard construction.

Well, that’s all the information I have to share with you. I wish you good luck in your future events, and may your opponents feel the wrath of green creatures not named Tarmogoyf. So until next time . . . 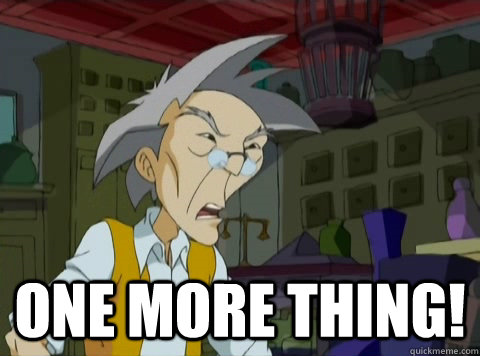 Hold on, I almost forgot. If you have watched any Magic streams in the past six months, you know that MTGBot, created by Daniel Beaupre, is the greatest thing to happen to streaming since Twitch. If you appreciate his work (I know I do), I strongly urge you to go donate to his cause at http://mtgbot.tv/Donatehttp://mtgbot.tv/Donate.

Ok! That’s all for today. Thanks for reading, and see you all next time!

*I strongly suspect that Miracles is overrepresented on Magic Online because of Joe Lossett (check out his stream at www.twitch.tv/Oarsman79 !) and the fact that you don’t rack up draws because of matches going to time. In real life, I don’t think Miracles is such a big issue because the opposing player has to be extremely competent with Sensei’s Divining Top and play fast enough to avoid draws in a long tournament.

**This may seem like a joke, but if anybody shows up with Crystalline Sliver and Muscle Sliver, prepare to lose.

***An allusion to having 62 cards in the maindeck. Why? I can’t say for sure, but when you play Captain Sisay, Green Sun’s Zenith, and Knight of the Reliquary, 60 cards may feel a bit cramped for all of the tutor targets.

****Not to mention you get to activate Mangara of Corondor twice on the next turn and then return him to your hand with Karakas.