After Brainstorm, Force of Will, Wasteland, and Ponder, the most played cards in Legacy are the three BUG fetch lands, the three BUG dual lands, Deathrite Shaman, and the second and third best counterspells in the format.

And they all go in the same deck.

If you skip over the also tied for twelfth place Swords to Plowshares, you find Thoughtseize in fifteenth—yet another commonplace tool in BUG strategies.

There are multiple stories here that people have been missing.

There is only one creature in the Top 15 cards in the format. Only Delver of Secrets joins Deathrite Shaman in the Top 20.

The top planeswalker is Liliana of the Veil, and she showed up in more than a quarter of Legacy decks in the last two months.

Another fascinating trend emerges if we look only at events with more than 50 players. The most played cards in Legacy shift from the left column to the right column: 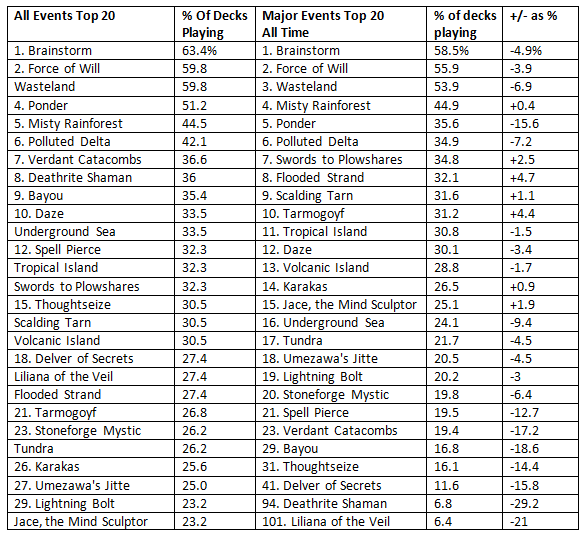 All of these delightful stats are courtesy of mtgtop8.com, which serves as a tournament decklist aggregator. The website is registered to Sylvain Lauriol, who you may recognize as France’s 2002 and 2006 National Champion, not to mention his 2002 Pro Tour Osaka Top 8. Since it’s a French site, it stands to reason that much of the website’s tournament data is from Europe, which gives us excellent insight into a very different metagame from that of your typical StarCityGames.com Legacy Open. The site scrapes only the successful decks from the tournament—for smaller events, this tends to be the Top 4 lists, whereas Legacy Opens tend to upload the Top 16 lists.

It is necessary that you understand the nature of this data before we get into a discussion of the numbers, as it is biased in a very significant way. Since the “Major Event” data is aggregated over the course of many years, Deathrite Shaman, Delver of Secrets, and Liliana of the Veil are artificially suppressed by their nature as format newcomers. Delver and Liliana showed up in 2011, while Deathrite Shaman came into existence in 2012. The format is several years older than they are, so they have a lot of catching up to do.

With that said, Stoneforge Mystic’s success is especially notable, as Worldwake was released in 2010.

Tarmogoyf is at a low point in the format largely due to creature decks becoming more evasive—people have learned that you can’t just cast a random ground pounder and attack with it. Both Tarmogoyf and Batterskull (via Stoneforge Mystic) suppress the presence of “cast creatures and turn ’em sideways” decks.

A side note on Tarmogoyf:

The decks that came into existence to beat Tarmogoyf decks have tended to involve evasive creatures (Tombstalker, True-Name Nemesis, Mirran Crusader), utility creatures (Mother of Runes, Deathrite Shaman, Scavenging Ooze), or both (Flickerwisp, Aven Mindcensor). As a result, Tarmogoyf decks have had to deal with a more cluttered board that often has to be dismantled one piece at a time.

Many times dismantling an opposing board simply isn’t possible. A Tarmogoyf strategy can often be overwhelmed on board by Elves or Death and Taxes. Other times a Tarmogoyf is made inefficient by a squad of creatures ranging from Delver of Secrets and Deathrite Shaman to a Batterskull equipped Germ token, True-Name Nemesis, and Vendilion Clique. When it’s impossible to block and you can’t race effectively against Delver of Secrets plus Deathrite Shaman’s Grim Lavamancer lookalike, Tarmogoyf gets a lot worse. As people have continued to build and play with decks featuring cheap annoying creatures, Tarmogoyf has gotten worse.

Anyway, back to all this data.

It is pretty clear that we live in a world defined by BUG decks and U/W/R decks, with BUG decks doing better at smaller events and U/W/R decks doing better at larger events. Since we’re looking at successful decks, we’re biasing away from lists hampered by budget constraints, suboptimal card choices, and so on. In any room of 40 people, more than a few of them are going to be playing with exactly the deck that they want to be playing. The idea that U/W/R decks are going to be more expensive than BUG decks as an explanation for their differences in popularity is a nonstarter. Incidentally, it’s probably also not true.

Ponder is at a high-water mark. It is entirely plausible that December 2013 and January 2014 were the best two months for Ponder in history, beating out October and November 2013 for the honor. When more than half of the winning decks in the format play Ponder, it is worth sitting up and taking notice.

Daze is worse now than it has been historically, which is understandable in a world where Deathrite Shaman is played in a third of the format’s top tier. After all, it is probably a bit harder to snag something with (an already die-roll-influenced card like) Daze if you’re playing against four Birds of Paradise every third round.

Hymn to Tourach is on the list—31st in the last two months, 45th all time—but it lags behind Thoughtseize by about 10%. This isn’t to say that you should start cutting Hymn to Tourach from all of your BUG decks but rather that you should carefully consider whether you want to cast (the world’s best) Mind Rot.

Enough with the stats for now—what are our options? What does a BUG deck look like anyway?

You may recognize Bob Huang as the most recent author of the Select side’s Leaving A Legacy. He played an altogether stock version of BUG Delver both in Washington DC and in Baltimore, with the only maindeck difference being the addition of a second Liliana of the Veil for the solo Sylvan Library.

Bob is pretty high on Hymn to Tourach and pretty low on Thoughtseize, which I find interesting. When you play Delver of Secrets in Legacy, you’re committing to playing a game that needs to be over sooner rather than later. Over a long enough time frame, someone is going to cast a spell more powerful than the cards in your deck, and you’ll die.

To understand why Thoughtseize is better than Hymn to Tourach, it’s important to understand the idea of polarization. No, not the electromagnetic term, and no, not the term used to describe the 113th Congress. Polarization (or a polarized [something]) is a way of describing an entity that is maximally good at something and minimally good at something else. To provide an example, your opening hand is:

This hand is not polarized at all. No matter what happens to it, you’ll get to play Magic against a wide range of decks. Now let’s look at another hand from the same deck:

This hand is incredibly polarized. If your Brainstorm gets Thoughtseized, your hand falls apart. If you get Hymn to Tourached, you’re fine—they probably won’t hit your Brainstorm, and you’ll be able to rebuild after getting Hymned.

Many hands in Legacy are polarized. Thoughtseize is the best card in Legacy at breaking up opposing plans. Hymn to Tourach is better in decks that are interested in playing longer and more drawn-out games. I dislike the idea of pairing it with Delver of Secrets.

It just so happens that a BUG Delver deck with Thoughtseize over Hymn to Tourach won an unsanctioned tournament in the Pacific Northwest last November. The person who came in second? None other than SCG Open Series master and recent Magic R&D hire Adam Prosak. Here’s the deck that won:

Aside from playing Jace, the Mind Sculptor over Liliana of the Veil, I really like Swailes’ list. It plays the same number of Delver of Secrets hits as Bob Huang’s deck (24), has True-Name Nemesis over Tombstalker and more planeswalkers, and cuts a land in a deck that is already fairly prone to flooding out.

True-Name Nemesis needs no introduction. It took the format by storm at Grand Prix Washington DC and has continued to show up in aggressive blue decks ever since then. Between True-Name Nemesis and Deathrite Shaman’s black activated ability, this BUG Delver deck can stop interacting with opposing blockers relatively early in the game.

Once you’ve decided to add True-Name Nemesis and cut a lot of black mana symbols from the deck, your mana base must change. I would recommend:

This schema lets you skip out on buying $90 Polluted Deltas, which is always nice. You keep your fourteen blue lands in addition to a set of Deathrite Shaman, so True-Name Nemesis is eminently castable. You end up with only thirteen black sources, which is another good reason to cut Hymn to Tourach—gathering two black mana on turn 2 isn’t always a guarantee. If your only Bayou gets Wastelanded, you’ll need three lands to cast Hymn to Tourach, which may result in stranding your discard spell in your hand long enough that it becomes irrelevant. By contrast, Thoughtseize is good at every stage of the game and comes with far fewer constraints.

Swailes’ sideboard needs some cleaning up. Although I like his relative paucity of three-drops compared to Huang’s two Krosan Grips, two Vendilion Cliques, and a third Liliana of the Veil, Swailes still has two Umezawa’s Jitte—an effective four-drop—and two Lilianas to go with his maindeck Jace, the Mind Sculptor. At some point those cards’ mana costs will prove a liability, especially against decks with Wasteland.

I would start by cutting the sideboard Lilianas for more Hymns, maximizing your disruptive capacity against combo decks while maintaining an aggressive role against midrange and control decks. I’d like to cut some of the one-ofs or the Spell Pierces for a Naturalize variant, whether it’s Golgari Charm or Seal of Primordium.

By moving the Hymn to Tourachs to the sideboard, you get the ability to more radically change your deck against combo. One of the most appealing parts of playing black in Legacy is having access to discard spells, which are at their best against combo. The problem with maindecking Hymn to Tourach is that you end up convincing yourself that they’re better than Thoughtseize at disrupting combo decks—after all, why else would you play this discard spell? The problem is that Hymn to Tourach on its own isn’t good enough to beat combo. You need a pinpoint discard spell, and Thoughtseize is the best in class at that. So you might end up sideboarding Thoughtseize in your quad-Hymn deck to shore up your combo matchups, at which point I have to ask this: why not switch them?

Legacy is a format that is heavily focused on mana efficiency. When you choose to play a two-mana spell, it has to be a lot better than a one-mana analogue. I’m not convinced that Hymn to Tourach is even as good as Thoughtseize.

Regardless, I’m happy to take this to the tape. I’ll be back later this week with videos of BUG Delver playing both Thoughtseize and Hymn to Tourach. Which one do you prefer and why?