Ding, dong, the witch is dead! 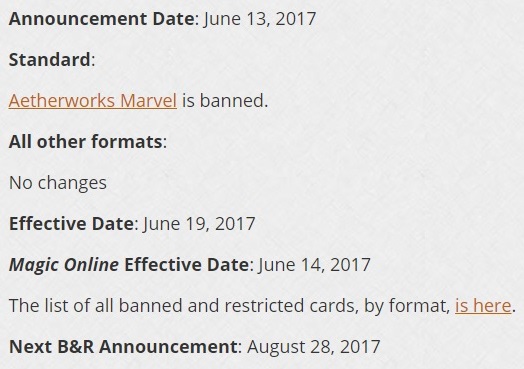 Aetherworks Marvel getting banned was kind of like seeing the couple in high school that took just a little bit too long to get together. Everybody knew it was going to happen, people talked as if it were already a done deal, and then the prophecy was finally fulfilled. Wizards of the Coast actually announcing Aetherworks Marvel’s banning is so cliche that I can hear Ocean Avenue playing in the background of the article.

But did we really know that this was going to happen? It’s easy to say something to the effect of, “Well, they’ve banned things pretty aggressively in the last few months, so they’ll ban Aetherworks Marvel too.” But to see this from the corporate side of things is actually pretty shocking. It sets a precedent that is somewhat frightening, but this is likely a specific series of events that has led to multiple bannings during the same format, rather than Wizards of the Coast beginning of a trend of regularly invalidating the cards its players invest in.

Making a balanced format is hard. Wizards of the Coast having to ban as few cards as they have throughout the history of the game really speaks to the work that they put in. Each banning that has occurred in the last few months has been a result of something that wasn’t planned by Wizards R&D. 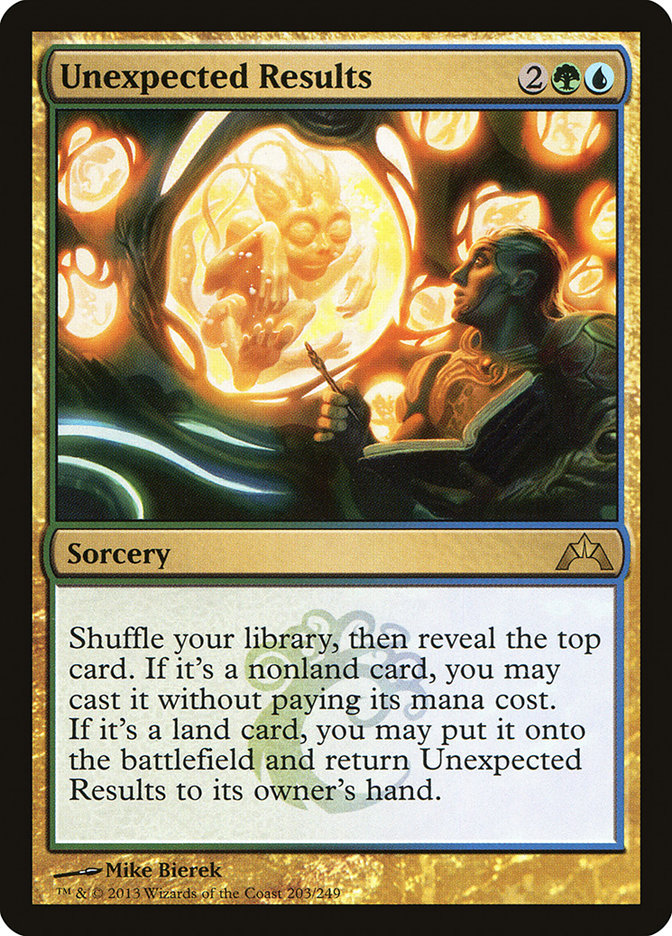 The first domino to fall was the twice-yearly rotation schedule being received so poorly. Remember, sets are designed roughly two years ahead of when they are released. This means that almost all of Amonkhet wasn’t playtested with Battle for Zendikar block in mind. Ulamog, the Ceaseless Hunger was supposed to have a brief stint with Aetherwork Marvel and rotate. I don’t want to think about the Reflector Mage / Glory-Bound Initiate deck.*

* It’s too painful to think we’re missing out on such a powerful W/U Humans shell.

There are dozens of minute card interactions that were unexpected and put Wizards of the Coast in the unenviable position of having to cross their fingers and hope that nothing broke. 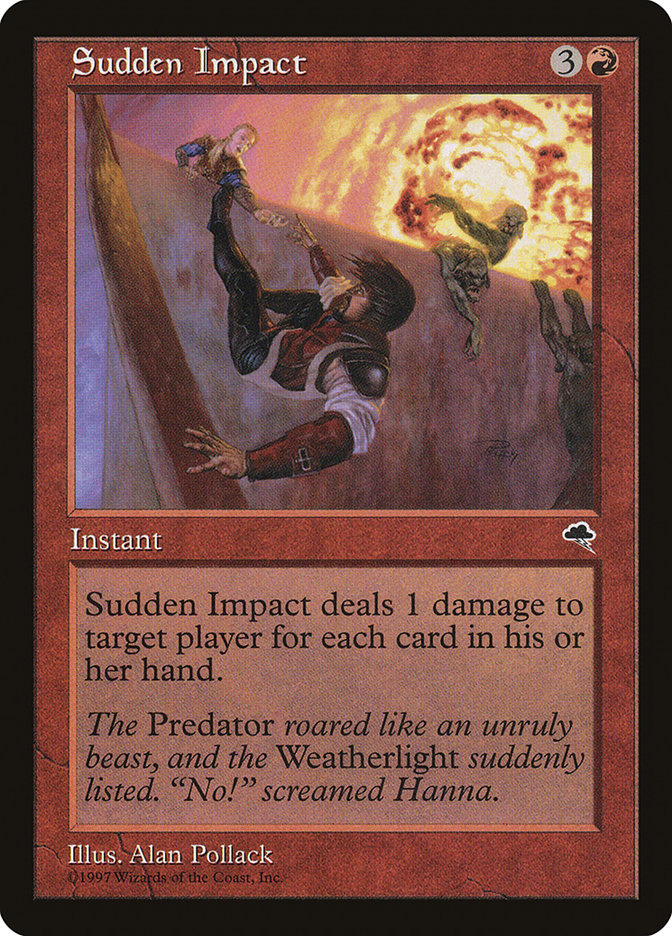 The issue lies in the fact that, even while banning oppressively powerful cards is a good thing for the format they’re being removed from, it carries repercussions on the rest of the format.

Imagine that each pillar of a Standard format is a so-called house of cards. The taller the house of cards, the more powerful the deck is. Every time a card is banned, the pillar it was supporting falls. When that pillar falls, another pillar of the format is now left unchecked by the previous big cheese.

Emrakul, the Promised End was meant to be a game-ending way to break the inevitable battlefield stalls that cards like Ishkanah, Grafwidow and Whirler Virtuoso would inevitably create against one another.

Smuggler’s Copter was meant to keep Gideon, Ally of Zendikar in check while highlighting the power of Kaladesh‘s new Vehicles subtype.

Reflector Mage was intended to give low-to-the-ground aggressive white decks reach while providing a body as well.

With each of these cards gone, battlefield stalls ran rampant; a Gideon, Ally of Zendikar deck (that could stand on its own better than U/W Flash ever could) rose to the top; and Thalia’s Lieutenant decks all but faded from existence.

Then one of the battlefield stall decks gained an arbitrarily large combo:

Wizards of the Coast has admitted that the combo was a mistake that made its way through R&D. This happens. With hundreds of new cards being printed each year, it’s hard to imagine that there isn’t going to be something that slips through the cracks. This just so happened to be an incredibly inopportune year for it to happen.

Felidar Guardian’s emergency ban was for the sake of format health, but it removed something important from the format: a deck to keep Aetherworks Marvel in check.

Ever since Pro Tour Amonkhet, Aetherworks Marvel has convincingly dominated the top tables and held the largest chunk of Competitive Standard League 5-0s on Magic Online. Without something to convincingly keep the deck in check while beating other things that pop up, it’s just been irresponsible to play any non-Aetherworks Marvel deck in any tournament where one is invested in one’s results.

Aetherworks Marvel being banned may be setting a precedent, but it is likely that it is just another link in the chain of events stemming from a series of unfortunate and predominantly unforecasted events.

Understanding why Wizards of the Coast makes the decisions that they do is helpful when trying to prepare for future Banned and Restricted announcements, but it doesn’t do a whole lot for those of us who are preparing for upcoming tournaments in the immediate future.

Building on the high school allegory, seeing the captain of the football team and the head cheerleader doesn’t mean that anybody else knows what to do. Figuring out what to do with Standard here is the exciting part. Before the Aetherworks Marvel ban, you had a few options:

In case it wasn’t clear, in the “you had a few options” portion of my previous statement, “few” was the operative term. Without Aetherworks Marvel warping the format in a way that only reusable card-advantage-meets-mana-cheating cards can, there are more than a few places that one can go from here, and I’m just going to jump to the first deck that comes to mind…

Days after Felidar Guardian started warming the bench for Aetherworks Marvel, Andrew Jessup and the rest of the Metagame Gurus squad had a great showing with Mardu vehicles at the first SCG Tour stop featuring Amonkhet. These cards keep dodging bans and were regularly able to compete with the cards that were apparently too good for Standard, but not good enough to beat a Heart of Kiran into Gideon, Ally of Zendikar curve.

In the early days of a format, very little beats the good old-fashioned “get ’em dead” plan. Sticky threats and efficient removal is a great way to make sure the job gets done.

If getting fancy with planeswalkers isn’t your style but you still want to play good removal, sticky threats, and “get ’em dead” cards, you have Zombies…

There isn’t much to be said about this deck that Gerry Thompson hasn’t said in the last few weeks. It was good enough to beat multiple Aetherworks decks on the way to snagging a Pro Tour title, and it’s likely good enough to slog through the fair gameplans of other decks. If U/R Control variants are popular, this deck will have a rough time, but against low-interaction creature decks, Zombies will shine.

Speaking of efficient threats, Temur Not-Aetherworks is still an option:

The primary issue with this deck is figuring out how many of its wins were on the back of opponents bringing in Aetherworks Marvel hate and then effectively skipping draw steps when they drew it. Even taking those games out of the equation, almost every creature in this deck is some sort of +1 from a card advantage perspective, and that’s a reasonable place to be in the beginning of a format. Grinding out other creature decks while somehow out-drawing the control decks is more than a little attractive.

On the other side of the spectrum, there are the straight-up control decks that can bury the opponent in cards before closing the game with a 5/6 Snapcaster Mage.

These decks will likely evolve to have fewer answers for Ulamog, the Ceaseless Hunger and more answers to the middle-of-the-road midrange threats. I’ve always been an advocate of Jeskai Control over U/R control almost exclusively for Cast Out, and when facing off against unknown threats, that opinion is reinforced. Don’t be afraid to play control because it’s early in the format. These decks are seriously very good.

Finally, my personal favorite and pick for “Most Adaptable Deck This Format” goes to B/G Constrictor:

I’ve already written a love letter to one of my favorite Magic people, er, decks on this website, and it still holds true to this day. B/G has several ways that it can be built to beat up on other archetypes and some pretty crazy sideboard plans to even go under the other aggressive decks. If you’re sleeping on this deck because it’s boring or doesn’t get enough coverage, you’re doing your own tournament results a disservice. There are several cards in this deck that do reasonable impressions of Modern staples, and it’s foolish to ignore the power in the synergies the cards in these decks have.

An Aside on Modern

Death’s Shadow is the best deck, but it’s seriously fine. There’s always going to be a best deck, and in my humble opinion, Pay-Eleven-Life-Tempo is a pretty okay deck to have as the best one.

The thing about this format having a best deck is that it’s still reasonable to play other archetypes. You just need to be cheating on mana somehow. More on that Thursday.

These bannings hurt. I’m right there with you. I was planning to play a not-Aetherworks Marvel deck at the Invitational and had most things planned out until a few hours ago. I was as far as having my Aetherworks Marvels and Ulamog, the Ceaseless Hungers listed online, and now I’m out some money. It sucks. Despite my writing, Twitch, and having access to a lot of cards through friends, I still have to buy cards and have a collection.

That being said, I’m confident that things are going to be okay. I’d go as far as to say I’m optimistic about the future. These bannings are unlikely to be the norm, and once we catch up to the point where Wizards had all of the information they needed during set design, we’ll be closer to the normalcy with which many of us have become accustomed.

The entirety of this article is to come around to a single overarching point. The sky isn’t falling; these things don’t exist on purpose; everything becomes illegal eventually. Come watch TV.