Oh. Oh yea. Ohhhhh yea. Say it like Rocket Raccoon does in that Guardians of the Galaxy movie. This has been a very good week for many reasons. There’s just way too much to talk about, so we’re going to reach back into hallowed antiquity and do one of those Quick Hits articles I used to enjoy writing so much.

Let’s just dive in. We have no time to waste.

This has been a hell of a season for my friends and me, Team Nexus. Brad Carpenter won Orlando and a few Classics, Emma Handy Top 8ed Knoxville to notch her first big finish, I was able to accumulate a few Top 32s, and Brennan DeCandio this weekend, well…bae did real, real good.

For those of you that don’t know, Brennan has become a very active Magic streamer on Twitch over the last few months, and his growing presence meant that a bigger finish was inevitable. He’s put in the time, effort, and most of all, ability in doing something as awesome as taking down an SCG Standard Open.

The B/G Delirium deck he piloted was a copy of his Invitational list; he believed in it and decided to run it back for the Open the next day when he wasn’t able to convert into a Day 2 berth for the Invi. No matter: he ran the tables on Saturday and Sunday en route to his first championship.

You all see a guy who took down a tournament with one of the format’s best decks. What you don’t are the talks we have in our group chat. Brennan owning his mistakes and admitting that he was at fault for losing a pivotal round late in the event. This wasn’t a player tilting off about being unlucky, but instead openly admitting to his team that he missed something, was wrong, and wanted to do better.

His build was geared to beat the mirror match with the inclusion of Ob Nixilis Reignited in the main. Kalitas, Traitor of Ghet pulls multiple layers of duty against almost every deck in the format, from being great against creature decks to corner cases when the other B/G player doesn’t have removal and you’re able to disrupt their delirium. Gonti, Lord of Luxury out of the sideboard is something I’d expect most B/G players to adopt, as it’s a natural two- or three-for-one and capable of swinging games wildly. What was once tech should become the norm.

I don’t really care how sentimental it is. This is something one of my best friends has always wanted, and he finally obtained it.

At the Pro Tour, Aetherworks Marvel was a very highly represented deck, but it was slaughtered by a prepared metagame of Torrential Gearhulk-based counterspell decks and the emergence of W/U Flash.

Over the last few weeks, it is clear that everyone laughing off Aetherworks as a bad deck might have been wrong.

What was once an all-in deck revolving around powering out an Emrakul, the Promised End has evolved into a midrange monster capable of playing a fair game or an absurdly unfair one with early eldrazi titans, giant Spiders, or anything that it might need in that moment.

Aetherworks Marvel decks were never scary until they became able to do multiple things very well instead of just one. The days of B/G Delirium and W/U Flash running the format are officially over.

That’s five Aetherworks Marvel decks in the Top 8 of the SCG Invitational.

“But Mark, this is a half-Modern-half-Standard tournament! This doesn’t mean anything!”

Four of those five decks in the Top 8 were 7-1 or better, which means they dominated the Standard section of the Invitation. Still don’t believe me? Let’s go across the country to Denver.

Two Aetherworks Marvel decks almost took down a stacked Denver Top 8. Mind you, this was a Top 8 without a single copy of B/G Delirium in it. Neil Oliver tweeted at me that he battled the Team Nexus B/G Aetherworks deck to a 10-4-1 finish, and he highly recommends it going forward. There are four or five different flavors of Aetherworks, and all of them are extremely viable.

The catch is understanding that Aetherworks-based decks aren’t meant to be played as combo variants, but instead in the same way you’d play something like Delirium. You have to assess your role based on the texture of your hand in the early turns. Are you going to be going for an early Aetherworks Marvel in hopes that you’ll hit something larger and potentially game-breaking? Do you have a Vessel of Nascency and it’s looking like you’ll be relegated to removal and a turn 5 Ishkanah? I’ve seen many players take poor lines in order to spin the wheel instead of understanding what their plan should be, and that is what separates good Aetherworks pilots from poor ones.

Team Cardhoarder put two pilots in the Standard Open Top 8 with similar, yet unique and powerful builds based around the legendary artifact, one of them winning the whole thing. It’s not a gimmick anymore, and the format will have to evolve to keep up with potential turn 4 Emrakuls and Ulamogs coupled with the ability to very acutely play long-ball when games get grindy.

My pet card is finally seeing the light. I couldn’t be happier. 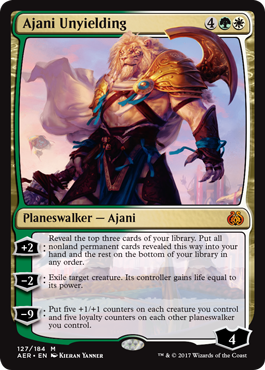 A new version of our favorite kitty-cat planeswalker was revealed this week, and I, the ever-optimistic believer in most things Wizards of the Coast prints…was left…

Ajani Unyielding is able to pass the first planeswalker test, which is protecting himself to an extent. The minus ability will let you exile any creature. This is particularly important when you’re dealing with a format stuffed with Emrakuls and other dangerous threats. The downside is that, for six mana, four loyalty isn’t that good. Dropping down to two puts it in very susceptible territory to being a very expensive single removal spell. With cards like Unlicensed Disintegration out there, exiling a creature and then getting your freshly cast planeswalker and one of your creatures killed doesn’t sound great.

Where Ajani, I think, will see the most play is a deck able to make the most of his +2, which can draw up to three cards. Six loyalty is no joke, and if it places a replica of itself into your hand, the card advantage engine will be pretty tough to overcome.

The issue I see is that the best creature out there for protecting a six-mana planeswalker is Ishkanah, Grafwidow. Unfortunately, you want to hit nonland permanents with Ajani, so diluting your deck with sorceries and instants may lower your chance to hit, and by proxy, hitting delirium will be significantly more difficult. In creature decks that could protect Ajani, Tamiyo, Field Researcher is capable of drawing cards, locking down attackers or blockers, and taking over a game. Ajani Unyielding, at first glance, doesn’t appear to be able to do that.

Six-mana planeswalkers are held to the Elspeth, Sun’s Champion standard of comparison. Is this card able to control the battlefield or win the game on its own? That answer appears to be no. Can it take over a game, and in conjunction with other cards, can it lead you to winning the game? That’s a maybe, because the cards you’d have to use to build around it may not be able to win games on their own. Its colors share an identity with Gideon, Ally of Zendikar, who has proven to be powerful enough to win a game, but does Gideon need Ajani, or is it Ajani that needs Gideon to be successful?

Oath of Nissa comes to mind as a way to perhaps play a wider game that allows you the option of off-color planeswalkers like Chandra, Flamecaller (or Chandra, Torch of Defiance), or even a way to delve into an Abzan shell with Liliana, the Last Hope or Ob Nixilis Reignited. Perhaps Tamiyo, Field Researcher and Ajani can connect, with Tamiyo providing coverage to let the leonin go to work. There are a wealth of options, but whether any of them is good remains to be seen. Aether Revolt may reveal new and interesting ways to utilize the interesting kitt, but given the early indicators, I’d be shocked.

Thankfully, this is a good indicator of the design prowess of Aether Revolt and that it looks like a set willing to take chances. Planeswalkers will rarely, if ever again, see the same strength that ones like Liliana of the Veil or Jace, the Mind Sculptor did. That just won’t happen. Now we’re reverting back to the Lorwyn days of utility planeswalkers that are all good, but not so good that games will revolve around resolving them or not. It’s much safer, and indicative of a better creative process.

They’re tough, but I think we’ve reached the end of the road for this week.

I leave you with a brew that I’ve been toiling with to mild success. If you have any suggestions for it, feel free to chime in.

And yes, it is Aetherworks Marvel-oriented.