Preparing for events that take place on release weekend can be very, very tricky, especially when Core Sets are involved. The card pool is so huge that it can often be overwhelming. What additions will be added to existing archetypes? Will new decks pop up? Which lesser-played decks will receive upgrades? Will the format speed up or slow down?

Public enemy number one has been Thoughtseize for pretty much the entire Standard season, and for obvious reasons. One of the better ways to beat a Thoughtseize is with redundancy, just having a hand that is full of cards that perform similar actions. A deck like Mono-Red Aggro is especially strong against Thoughtseize because all of their cards are very close to “Attack for two” or “Deal two/three damage to target player.” Decks that have redundancy on the low end but lean on some kind of heavy hitter to push the game in their favor are much softer because of the huge target on the bigger card’s back. This is the reason why decks like Red Devotion, Green Devotion, and Naya Hexproof haven’t been completely dominant, though you can certainly win a tournament with any one of those decks, as Naya Hexproof has proven recently. Mono-Blue Devotion seems structured similarly, but it is actually better equipped to create pushes on their lower end because of the residual offensive advantages they gain by just playing their game. Scrying every single turn also helps mitigate the effects.

So with M15 rolling in, the most immediate question regarding the expanded season for me is this: what Thoughtseize mitigation will be presented to us? This is an extremely difficult thing to do from a design perspective, but the Soul cycle is the most obvious answer to me. You’re always going to get something out of it unless they exile it from your hand… which is why Soul of Theros and Soul of Zendikar, while exceptionally strong, won’t be as powerful as they could be. Lifebane Zombie is truly obnoxious like that and will remain so through September. All of their effects, however, greatly dampen the power of Thoughtseize in one way or another.

Another not-so obvious way of handling Thoughtseize is by naturally scrying or otherwise using the top card of your library as a resource. Raw card advantage is not particularly efficient or even that powerful in this format; more and more often, a big Sphinx’s Revelations simply not enough by itself. Having cards that translate into virtual card advantage, however, is extremely important. Permanents that maximize this while also being threats themselves are at a huge premium, and I’d go as far as saying that you cannot make consistently deep runs without having at leave one form of that type of card. Domri Rade, Thassa, God of the Sea, Magma Jet, and Courser of Kruphix are some of the biggest examples of this. 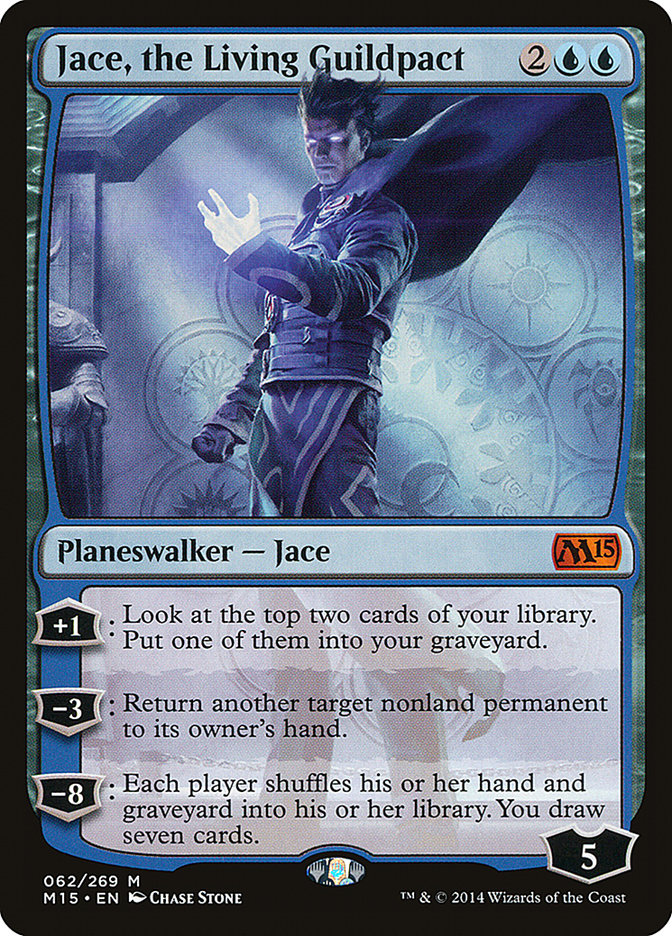 We had the exact same controversy over Domri when he was first spoiled, and look how that turned out. Jace is very similar in function to Domri, but is a bit more tempo-friendly. The first mistake players are making when evaluating this Jace is comparing it to Jace, Architect of Thought. While a very attractive thing to do, same names don’t mean same functions. This Jace is looking to do very different things than its Return to Ravnica version. You want to make a tempo play under slower decks with the Living Guildpact, something that Architect of Thought could never do well. Part of the reason why Jace, Architect of Thought started seeing less play in Mono-Blue Devotion is because of how much better Bident of Thassa was for their plan. Jace, the Living Guildpact is pretty close to a Bident of Thassa, but it can end the game much more quickly against control decks, punishes big-creature tapout plays really hard, and converts that pressure into virtual cards. How is that not exactly what Mono-Blue Devotion is in the market for?

Stop trying to jam every single planeswalker in control decks! My article last week explained how our mindset of planeswalker evaluation has to change in order for us to fully understand the potential of new ones, and I’m willing to go out on a limb and say that Jace will wind up being the most impactful for this expanded season.

If I think that Jace is going to cause a push this drastic, then the other, more widely-accepted cards have got to be an even bigger push. Fact of the matter is, there will be more popular choices even if Jace does wind up being contextually the most powerful of the new planeswalkers. Influence usually matters more than power level when it isn’t obvious, and it can directly affect the context of how one sees a format develop. From what I can gather, the most influential of the bunch is Nissa, Worldwaker, a card that really gives green devotion decks that independent push it desperately needed. If Nissa, and by effect, green devotion becomes the popular thing – then we circle back to the boogeyman of the format in Thoughtseize, picking apart the green devotion decks alongside Lifebane Zombie. Of course, things get way more convoluted than this as there are many more decks involved, but it just goes to show how difficult it is to get a good position in this format.

I guess I hinted at it earlier, but if I were to pick a deck to play for M15, I’d play Mono-Blue Devotion. It’s one of the three decks I’ve had the most experience with, and I know you’ve probably heard it a million times by now but experience is the best thing you can be applying in Standard, no matter what the best deck is, was, or will be.

“Just show me a decklist”

There isn’t much that can really be done to the shell of Mono-Blue Devotion, so I hope you weren’t expecting some insane innovations. What is worth saying is that Void Snare is one of the most exciting cards not being talked about. Yes, Cyclonic Rift is already a very powerful option, and the overload option is one of the most powerful plays you can make in general. However, time has showed us before that the difference between one mana and two mana is huge, and for a deck that’s already trying to use as much mana as efficiently as possible, Void Snare will alleviate a ton of strain in the early and mid-game especially when you have a lot of them. The real question is whether being one mana cheaper is worth the loss of instant speed. If the format stays the speed it is now or gets even slower, I think it’s more than fine.

Speaking of speed, another card that’s really interesting for Mono-Blue Devotion is Aetherspouts. 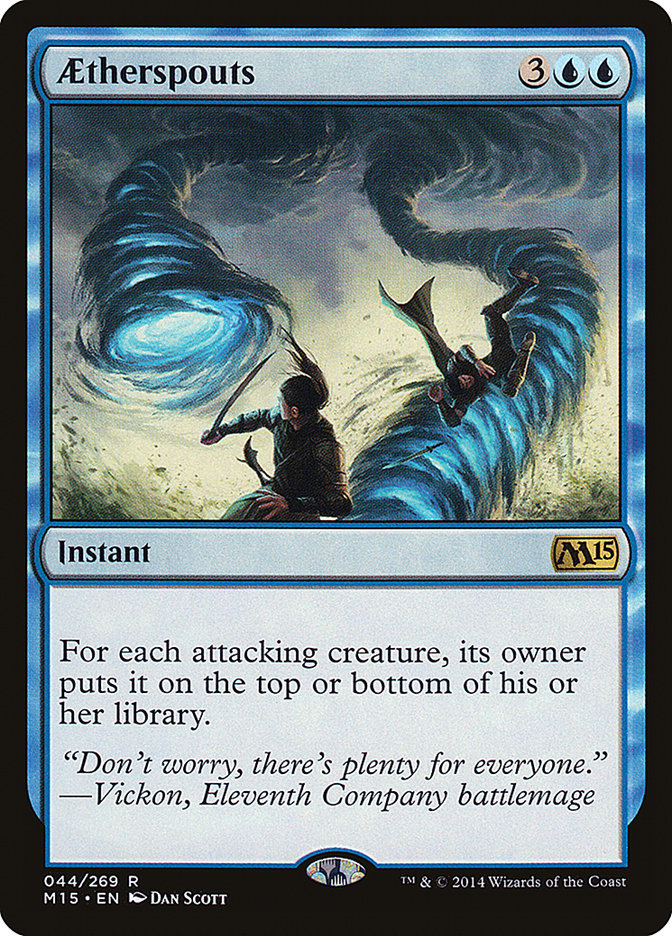 Again, we’re gonna have to evaluate this on the same scale as Cyclonic Rift. The upside to Aetherspouts is the blowout potential. Against any deck trying to kill you quickly, it can often be a straight-up wrath and Time Walk at its best. While you’ll sometimes wind up with a slightly-overcosted Griptide in really bad situations, that isn’t necessarily the worst against decks like Monsters where you’ll wish you had another slingshot effect in the games where you’re behind. Again, the difference between five and seven mana is pretty big, and hitting non-creatures is important too. Aetherspouts can hit an attacking Mutsvaults as well, so I can see that being relevant.

There’s a really strong chance that all of this shifting just doesn’t happen. Thoughtseize can still be the pain in the butt that it’s always been, and Pack Rat still might just reign supreme. We can’t find out what works if we don’t try it, though, and I don’t mind being the guinea pig to work on any and all of these cards for the Baltimore Open. Are there any cards that you believe will cause a major shift away from Thoughtseize or any other part of the format?