Last week we spoke about an unenjoyable but vital topic, playing from behind.

By definition, playing from behind isn’t fun because you are losing. Any game played from a disadvantageous position is likely to be lost, despite playing well and giving yourself every possible opportunity to come back. You can make masterful plays to give yourself a slight chance of victory in a seemingly unwinnable game, but most of the time you will lose anyway and nobody will even notice.

This can be disheartening for most players, but these small edges are what separate merely good players from excellent ones. If you can win one unwinnable match every few large tournaments, that can very often be the difference between making Day 2 or missing Day 2, or even more importantly making the Top 8 instead of falling into the Top 16.

Today we are going to talk about the opposite. 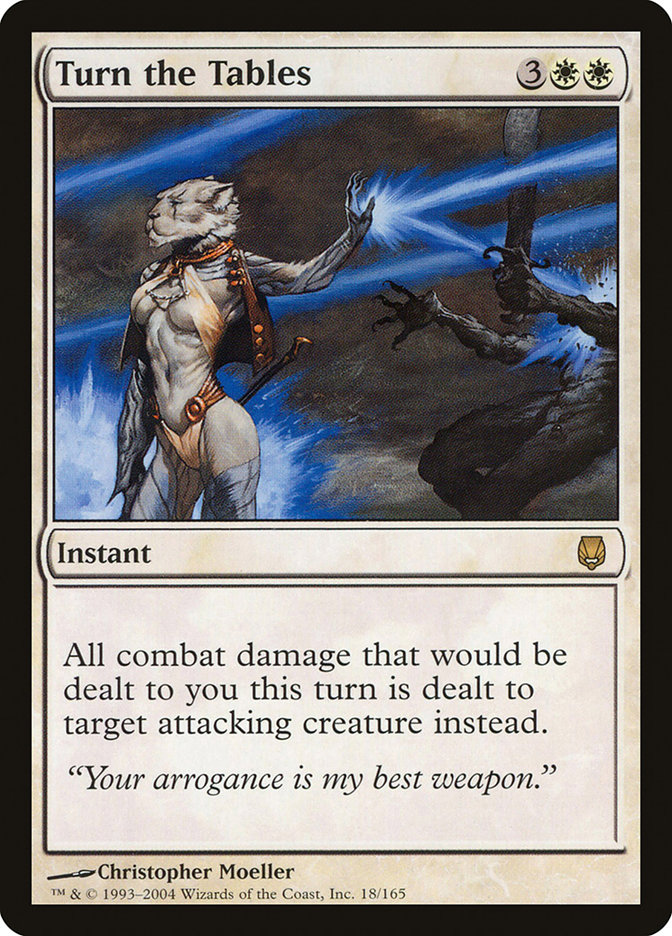 In today’s examples, we’ll be far ahead of our opponents. We’ll be in spots where we are going to be in great shape to win, even if we bumble our way through our last few turns. However, just because we are ahead does not mean we have to stop focusing on our games.

Much like excellent play can steal a win or two from disadvantageous positions, sloppy and careless play when ahead can let games that should be locked up slip through the cracks. Winning a game of Magic is hard enough as it is, and letting one you should have won slip away can be devastating. 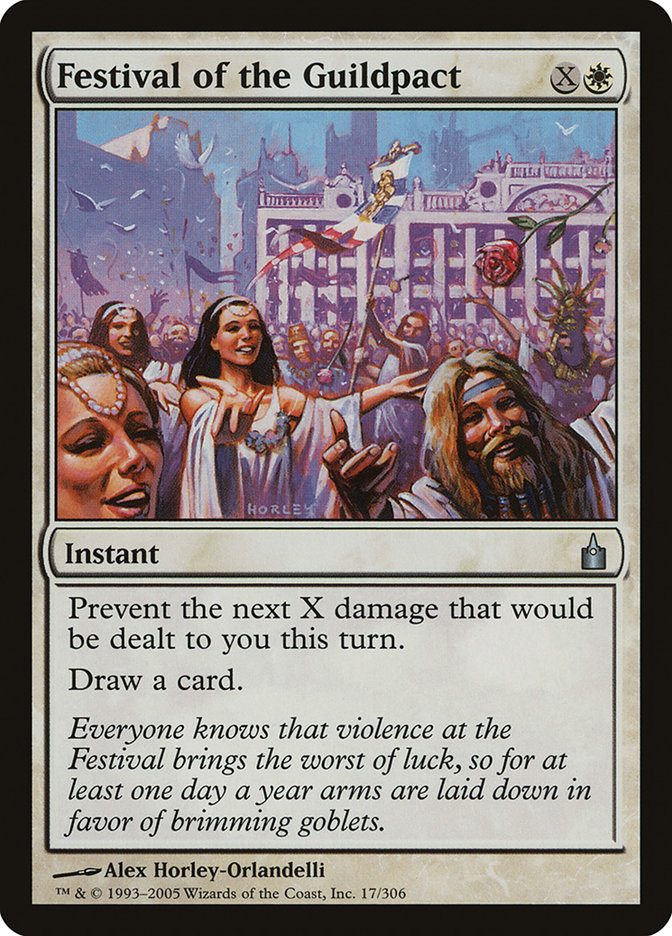 But that is often the issue. Winning is fun, and being in a winning position can often put players in a overconfident “let’s just get this over with” state of mind that is often what allows improbable comebacks to happen. Most of the time, all things being equal, the playing in the winning position is going to win no matter what they do, and Magic players are notoriously bad at examining their wins for mistakes as well as their losses. Magic players are often also quick to blame luck in scenarios where they lose while they are ahead.

“Well, I was winning, but then she drew three Lightning Bolts in a row before I could kill her. So unreal!”

What that player won’t mention is how they didn’t respect that a string of Lightning Bolts was an out and unnecessarily went down to nine life. When getting lucky is your opponent’s only chance to win, it’s on you to make sure you don’t afford them the luxury.

So how do you avoid the embarrassing fate of losing games where you are a strong favorite?

It’s as simple as asking yourself this question:

This answer can be something as simple as “they need to draw three Lightning Bolts before I can finish them off” or something as complicated as “they need to have an Unlicensed Disintegration in hand, draw another one, and have me brick off for four turns while they kill me with a Scrapheap Scrounger.”

How complicated the answer will be is directly correlated with how much of a hole your opponent is in. It is your goal to try and seal up your opponent’s outs as much as possible, and not allow them the chance to get lucky and steal the game.

Let’s look at some examples. 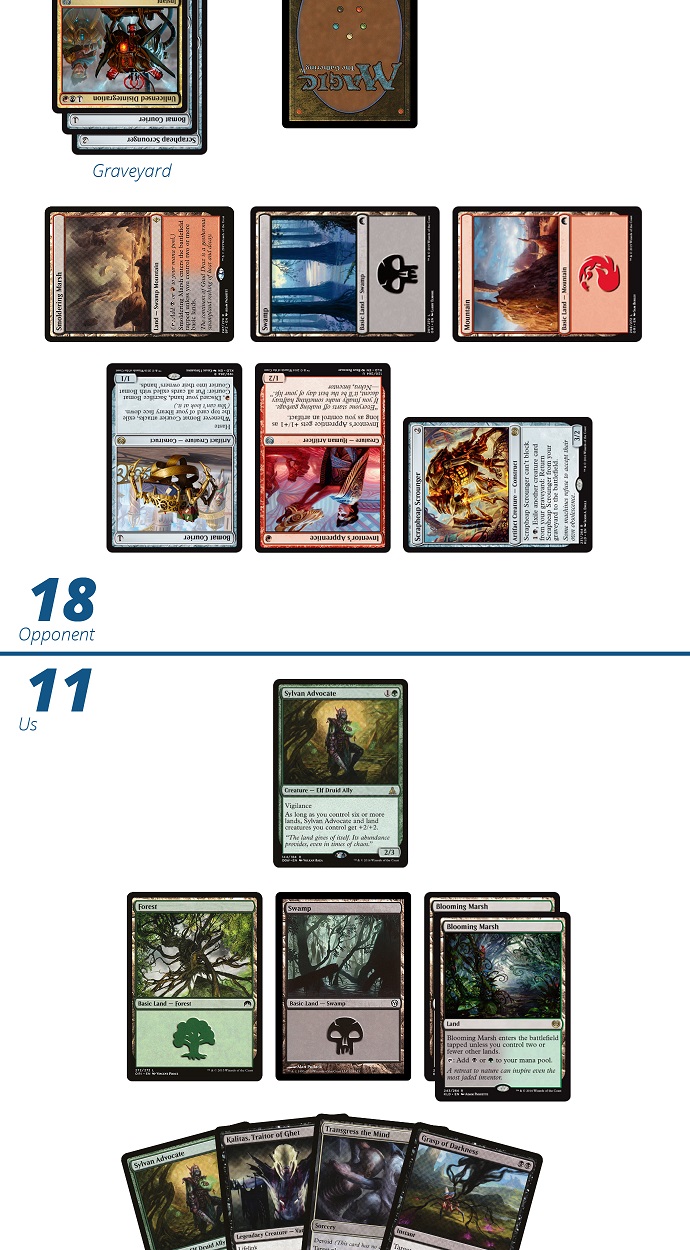 We are playing a match of Standard with a more controlling B/G Delirium deck against a R/B Aggro deck. It is Game 1, and our opponent’s mulligan combined with an early smattering of removal spells and Sylvan Advocates has stifled our opponent’s aggression. We have missed some land drops, but for the most part we have run our opponent out of gas.

Last turn, our opponent played Unlicensed Disintegration on one of our Sylvan Advocates and got in for some damage, but they are starting to fall behind after not being able to do enough damage early.

This turn we are presented with a choice.

Considering our opponent just used an Unlicensed Disintegration on our Sylvan Advocate in what seemed like a last-ditch effort to get some damage through and get back on the battlefield, the coast seems perfectly clear to slam Kalitas, Traitor of Ghet and run away with the game.

But before we do that, let’s ask ourselves the important question of the day:

As it stands, the answer really is quite simple.

If our opponent’s last card in hand is Unlicensed Disintegration, we might actually be in trouble despite our second Sylvan Advocate and our removal spell. It would bring us to only eight life, and unless we can find some lands to make our Sylvan Advocates into 4/5s, our opponent’s Scrapheap Scroungers may be able to finish the job before we can draw out of it.

Is it likely that our opponent’s last card is Unlicensed Disintegration?

Not really. Our opponent has been mana-shy the whole game, so it seems very possible they’ve got another proactive spell they just couldn’t cast yet. They also just cast an Unlicensed Disintegration last turn in a somewhat desperate scenario, and they only have so many in their deck.

But what’s likely doesn’t really matter, because it’s one of the few scenarios where are opponent can work their way back into this game.

With access to a Transgress the Mind and two other options at two mana in our hand, we are afforded the luxury of being able to play around our opponent having exactly Unlicensed Disintegration without putting ourselves in serious danger.

This is a spot where many players would just slam Kalitas and look to close the door on their opponent as quickly as possible, and you know what? Most of the time it would work. The game would end shortly afterwards and nothing would be thought of it more than a dominating victory.

But sometimes, that last card is going to be Unlicensed Disintegration. Sometimes when you aren’t careful, you are going to lose.

Avoiding these losses is just as important as being able to steal wins when you are way behind. 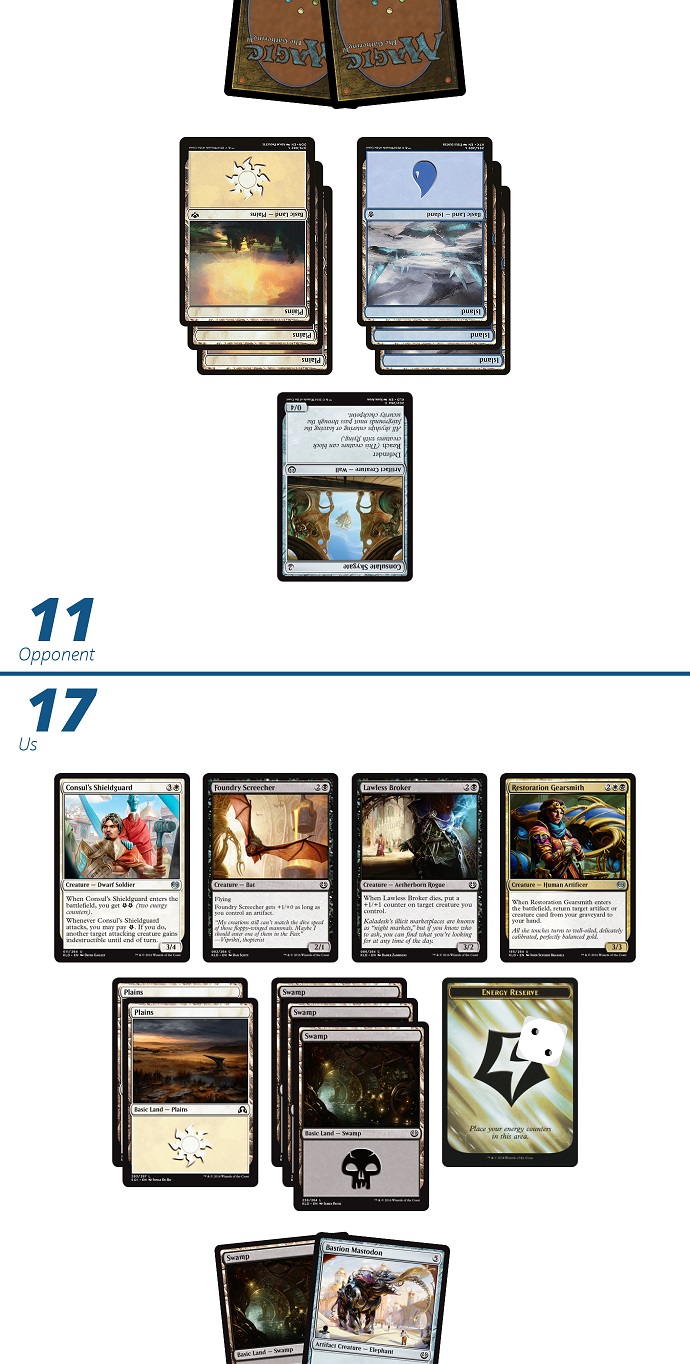 Playing Limited makes our “What needs to happen in this game for me to lose?” question even more complicated because it increases the amount of possible cards your opponent can have to the entire set.

In this game we are clearly very far ahead of our opponent.

We’ve got four creatures on the battlefield to their one, which is just an 0/4 blocker, and have another good creature in our hand as well. A game like this looks almost comical to an onlooker, as Limited decks rarely have cards that are powerful enough to swing a game state as tilted as this one. Two attacks and the game will be over, and we even have evasion and the ability of Consul’s Shieldguard to help power through if they play a very good creature.

So why is this game interesting at all?

Once again, we need to ask ourselves the important question:

In this case, it is fairly simple. 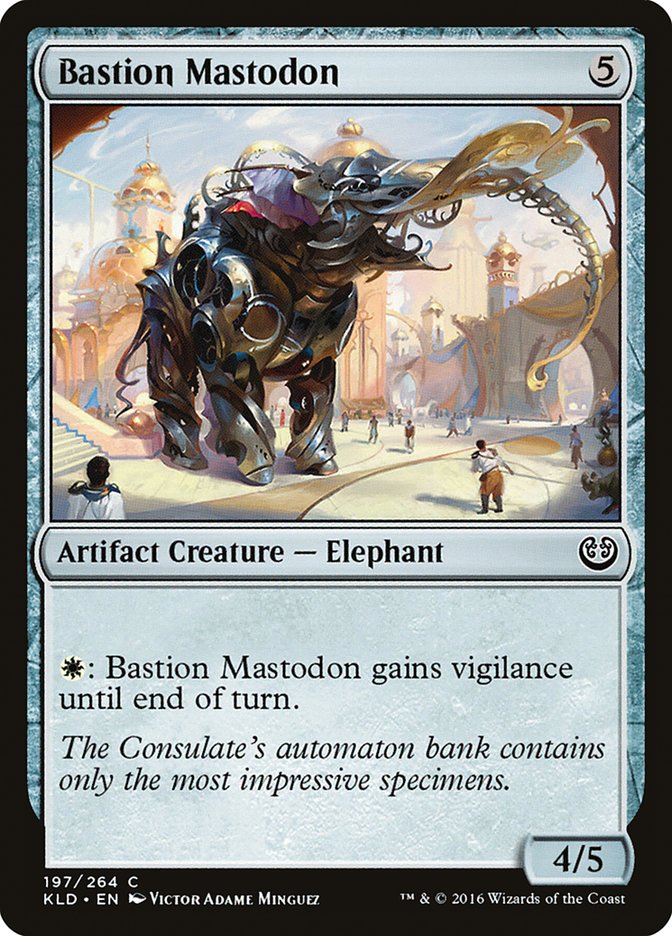 In this case, casting Bastion Mastadon is almost completely unnecessary. There are very few ways for our opponent to survive next turn’s attack besides Fumigate, and even if they do manage to survive, you can cast Bastion Mastadon the following turn if absolutely necessary.

This is again another spot where it is easy to be overconfident, just slam your creature onto the battlefield, and win the game anyway. Even if you do, a large majority of the time your opponent will not have the rare Fumigate in their draft deck and they will die anyway. This, however, does not make it the right play.

This may seem like a small margin, but Magic is a game of inches.

These sorts of plays seem small in scope and don’t frequently affect the outcome of a game. This is understandable, as usually the player that is winning wins and the player that is losing loses. However, this doesn’t mean you shouldn’t be striving to make the optimal play at every stage of every game, whether you are far ahead or far behind.

Don’t let your wins slip away from you.

Figure out what could happen to allow your opponent to steal a victory, and do what you can to make sure it doesn’t happen.

Magic is both a community and a chance for us to escape from real life for a while and enjoy time with our friends and loved ones. It is a game where you can be welcoming, be understanding, and be compassionate. Whether it’s sharing a game of Commander, planning a road trip to #SCGCOL, or lending an ear to someone, please be good to one another.

We are a community. Let’s make sure we act like one. Together.