Anyway, this go around, my buds are Ross Merriam and Daryl Ayers, two
people that I’ve known for quite some time. Both are solid Magicians, both
have their strengths and weaknesses, and it is my job as self-proclaimed
Team Captain to help both of them amplify their strengths while nullifying
their weaknesses.

Daryl came to me a few months back asking if I wanted to be on his team. As
someone who’s been looking for a solid Legacy player on my squad for a
while (and specifically one that can play Lands), I was more than happy to
snap him up. We’ve been “frienemies” for a long time, but I gotta say he’s
been growing on me over the last few years. I even went so far as to let
him stay in my guest bedroom once (I’m a nice guy, so shut up about it).

But once I had Daryl on the hook, I knew I needed a mark to take the bullet
in Modern. I just couldn’t do it anymore. And I knew just the person for
the job.

In my “expert” opinion, Ross sucks at Standard. He hasn’t had a good
Standard result in quite some time. In fact, his last four or so Open Top
8s have come in Modern. At one point last week, he offered to take up the
Standard reigns, and I had to shut him down by asking him one simple
question: When was the last time you did well in a Standard event?

The fact that it took him about thirty seconds to recall that event made me
absolutely positive that he shouldn’t be touching that format. Maybe I was
being a little mean? Sure. But it’s Ross. C’mon. Plus, I’m right. And that
alone pushes the needle in my favor.

So without further ado, let’s get to the decks that each of us should be
playing this weekend.

While Mardu Vehicles was all the rage this past weekend in Dallas, I think
that G/B Constrictor has the tools to dismantle it quite easily. And if
you’re aware of their sideboard plan to go bigger, you can sideboard in
such a way that counteracts that. Yes, their sweeper effects will do some
major damage, but you can counteract that with more vehicles, creatures
that gain card advantage, and bombs that can end the game on their own.

I’ve looked over quite a few different G/B Constrictor lists, but this one
is the frontrunner.

I’m going to be spending most of my time before leaving for the tournament
working on the sideboard, but the maindeck seems almost perfect. And while
I might personally prefer to play more copies of Ravenous Chupacabra, I can
definitely see why only one or two could be a better number. It doesn’t do
much against control, can’t hit vehicles, and the body isn’t always
relevant. And without Rishkar, Peema Renegade to help make the body a bit
bigger, cutting down to one or two makes a lot of sense.

The sideboard is where I’m most concerned, as I’m not exactly sure how many
of each type of card I need. Do I want a ton of stuff to help beat control?
What about artifacts and enchantments? Should I be more worried about
aggressive decks, God-Pharaoh’s Gift, or other midrange strategies? Only
testing will tell.

My gut says that God-Pharaoh’s Gift will be around in reasonably high
numbers, so having ways to eat their graveyard (Deathgorge Scavenger), hit
their hand (Duress), and destroy their marquee artifact (Naturalize) all
seem fine. Plus, all three of these cards can be brought in against a
variety of matchups. Naturalize is pretty sweet at helping fight Heart of
Kiran and a number of other nuisances. Duress is obviously great against
control and other spell-heavy decks. And Deathgorge Scavenger can gain you
enough life to stay alive against Hazoret decks. 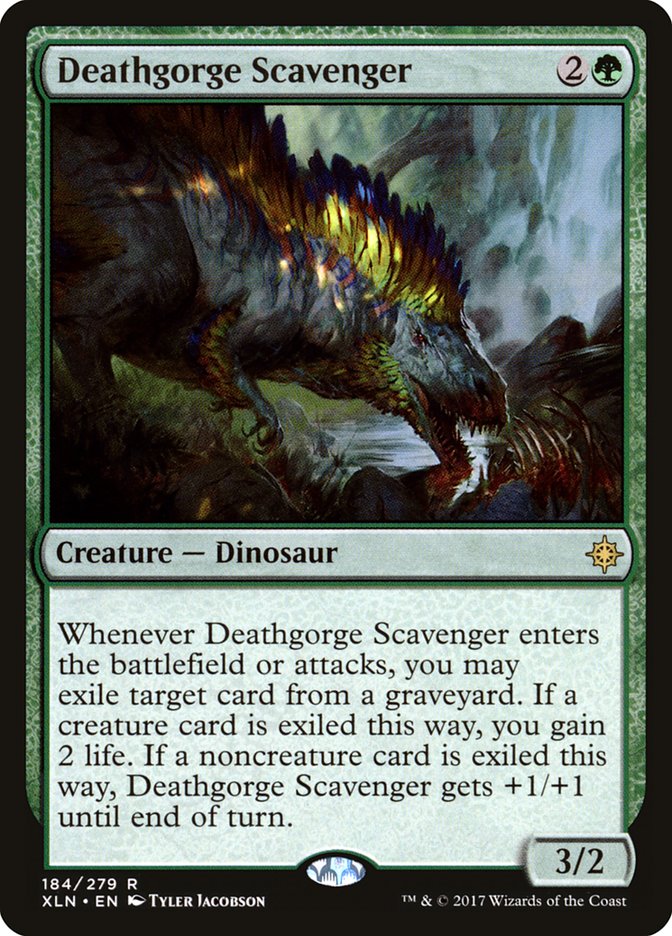 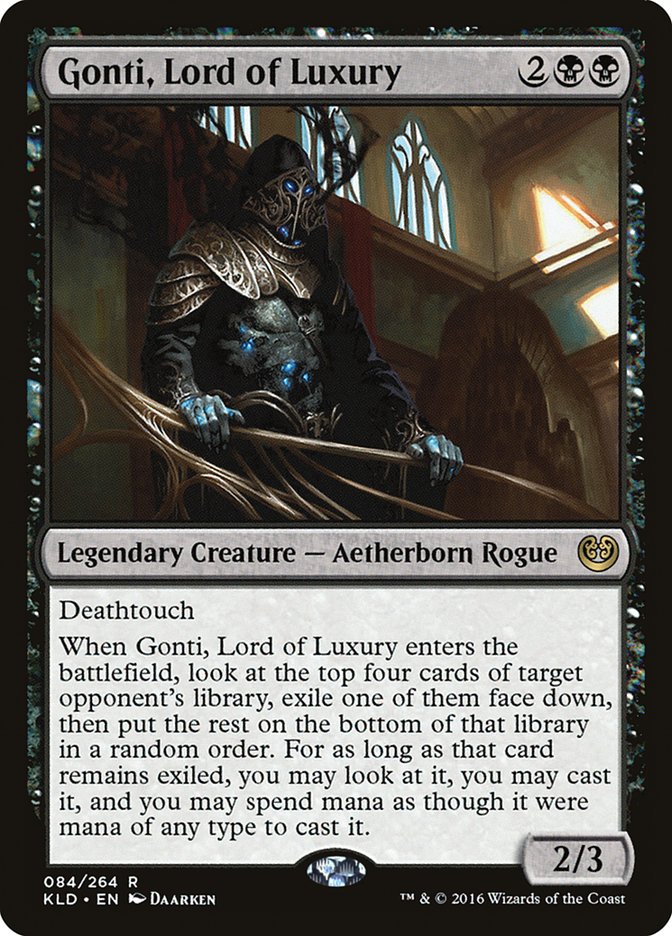 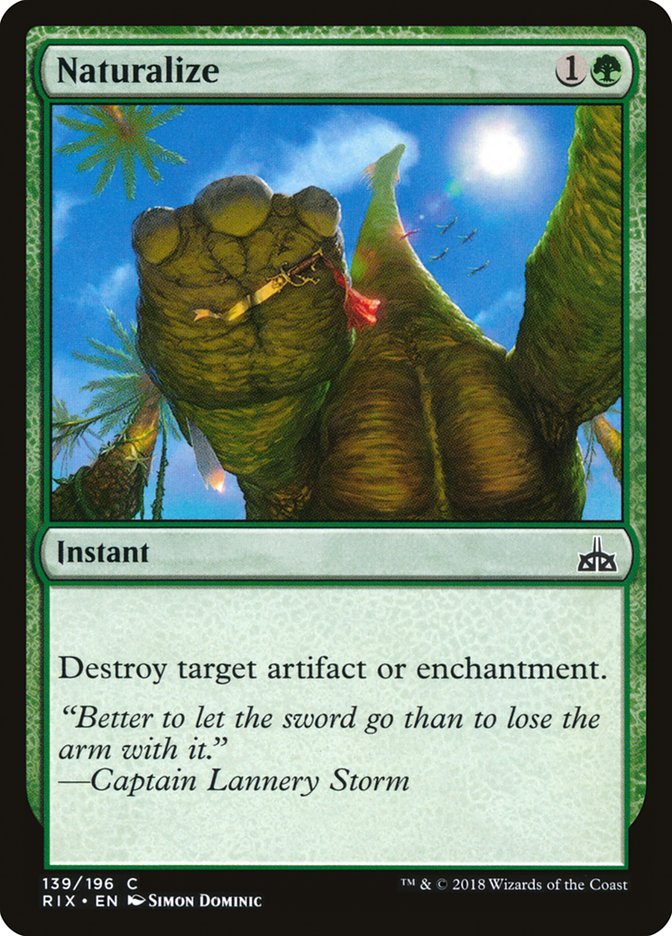 My anti-midrange package is what excites me the most, though. I love me
some Gonti, Lord of Luxury (treat yo’ self), and I like him even better
alongside Liliana, Death’s Majesty. Not only do you get to steal one of the
best cards out of their top four, but the deathtouch body is hugely
relevant for gumming up the ground. And while Liliana, Death’s Majesty
might not be as busted without Ishkanah, Grafwidow, I think you’ll be able
to find some ways to make your opponent’s life miserable. That’s what
Liliana does best, after all.

Full disclosure: if I don’t do well in testing over the next two days,
there is a very good chance that I switch Standard decks. I don’t want to
make y’all think that I’m lying to you about what deck I’m playing. I might
not even end up playing Standard. We’re a new team, we have a new Standard
format, and I just want us to have as much fun as possible. There’s a lot
of time left between now and when we leave for Philly, and I’m hoping to
use that time wisely.

Ross is quite good at playing fringe decks, and is also great at finding
ways to attack the metagame in just the right spot. Right now, I’d wager
that U/R Gifts Storm is a bit too much of a hot button to touch. People
have “figured it out,” so to speak, or as much as they need to keep you
from winning the majority of your post-sideboard games. Elves might be a
decent choice, but it’s probably weak to Jeskai Control. And it’s always a
coin flip on whether or not you should play Dredge. It just depends on what
you think you’ll be playing against.

Should Ross play Humans (vomit)? It has been putting up solid numbers as of
late. It has reasonable matchups across the board, a proactive game plan
that puts on the beats in a hurry, and disruptive elements that slow down
combo decks. As much as I hate the deck in general, I think it’s a solid
choice for him and our team. I was wrong. Humans is not a horrible deck.

Whatever we decide on, I’m letting Ross take the lead. He’s been testing,
and I’ll trust his gut. And if his gut says Humans, then I’ll just take it
in stride.

There were early talks in our team discussion about Daryl playing something
other than Legacy and something other than Lands. I told them both, flat
out, that it was a stupid idea. Daryl is a fantastic Legacy player and an
even better Lands pilot. And with decks like Four-Color Whatever and Grixis
Merfolk of the Pearl Trident roaming the streets, Lands seems like a great
choice. 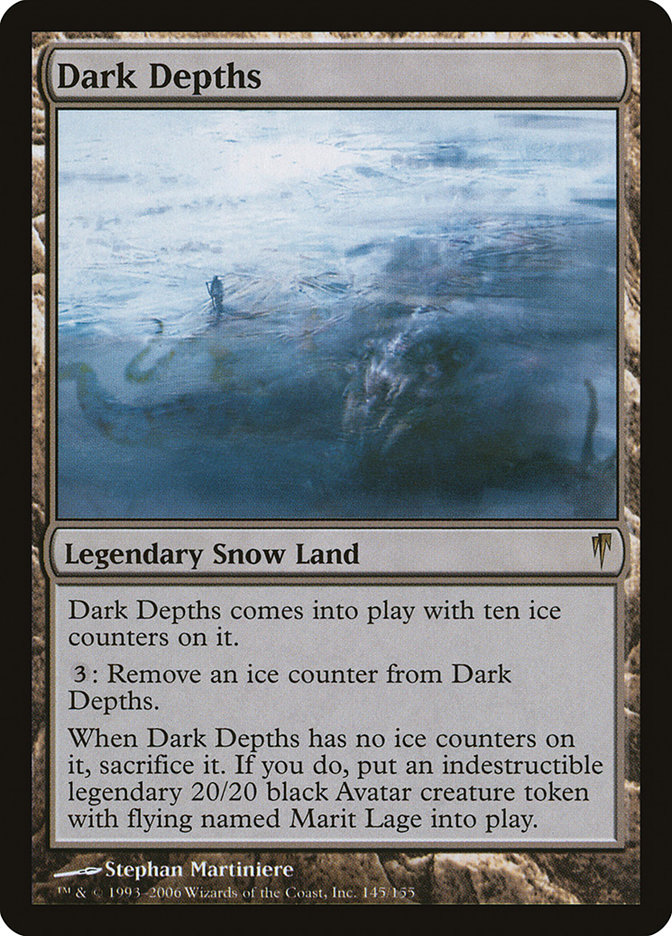 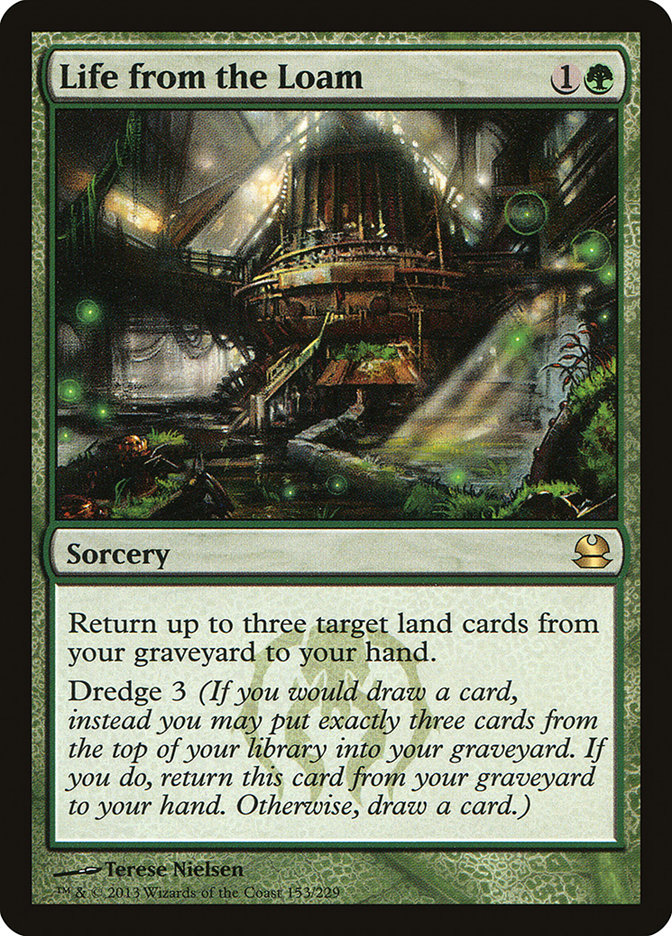 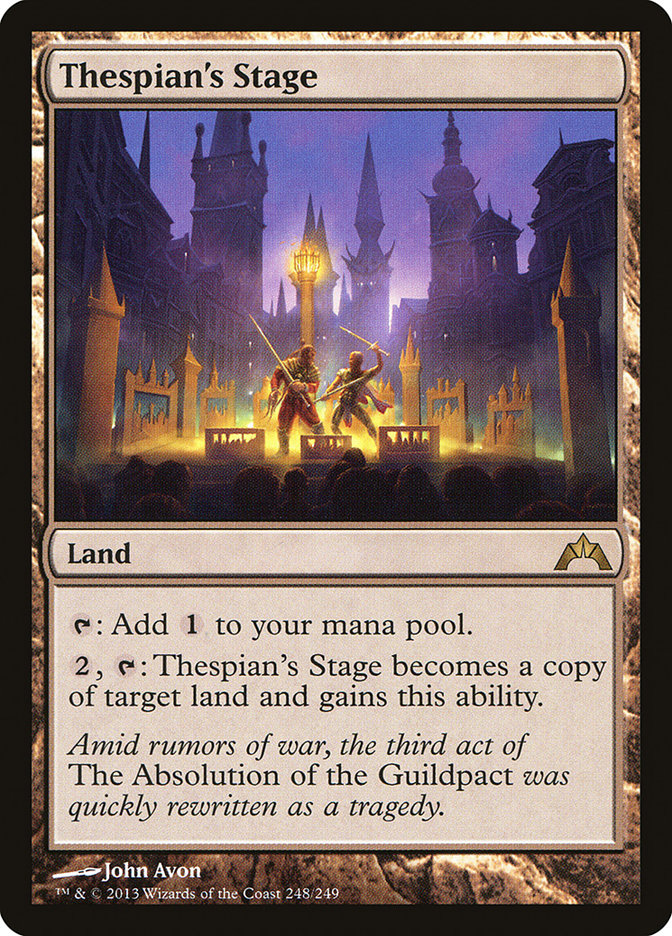 Of course, Lands can be “hated out” to some degree. And since it has busted
out in the last few years, people have become more aware of how to interact
with it. Stopping the Marit Lage combo is fine, but you still need to beat
Punishing Fire. Stripping the deck of Life from the Loam is the easiest
route to victory, but you can still lose to a quick Marit Lage. The deck is
phenomenal because it’s flexible. If you attack one part of it, they will
bury you with the other part. Game 1s against most decks in Legacy will
fold to a slew of Wasteland and Ghost Quarter. And if the situation calls
for it, stuff like Gamble and Crop Rotation make finding the fast combo a
bit easier.

But I trust Daryl, especially so in Legacy. And that’s one of the hardest
parts of playing in team tournaments: trusting your teammates. If they
don’t think a deck is good, especially if that’s the deck they’re used to
playing, then you should listen. I haven’t always been a good listener. I’m
stubborn and I like what I like. But I have to learn to let some of that
stuff go for team events because it’s important for you and your two
friends to find a cohesive balance.

The above scenario is the most likely scenario for our team. If you want
Daryl’s Lands decklist, I suggest “Google.” It hasn’t changed much in the
last two years, and he has plenty of results. If you want Ross’s decklist,
I suggest asking him on Friday night on Twitter when he’s had a beverage or
two. I’m sure he’ll oblige, and I won’t stop him.

In the unlikely scenario that Daryl ends up thinking Lands is a bad choice,
here is an alternative deck/format structure for our team.

If Mardu Vehicles, it will most likely be 72/75 from

A Brief Aside on Team Etiquette

Whatever decks/formats we choose, I think we’ll end up picking what’s right
for us. And that’s something I can’t stress enough. If you plan on
attending the event yourself or a future Team Constructed event, just make
sure you’re all on the same page. These team tournaments can be pretty
stressful with long hours and tight games. If someone makes a mistake and
it costs your team the match, don’t blame them. Just let it go, and put
your mind toward the next match. Harping on game-losing mistakes will only
lead to more of the same.

Also, if you’re doing well with your format/deck and someone on your team
is not, please don’t go around telling everyone you’re “X-0 but my team is
X-3″ or whatever. It’s rude, and it makes everyone around you
uncomfortable. Your teammates are a part of your record. You win and lose
together. Saying stuff like that only makes the people on your team who are
losing feel worse, which often leads to more arguing and more losing.

Don’t ask your teammates what to do on your first and second turn. Mulligan
decisions are fine, but I’m sick and tired of waiting on people to figure
out which lands to play and which two-drop to slam down on the battlefield.
If you’re going to play in a tournament, at the very least you should know
basic sequencing. Holding up two matches is just plain rude. And if you do
it too much, you’re sure to get an unintentional draw or two. If you can’t
make up your mind on the first or second turn, how will you ever make up
your mind past the fifth one?

Introduce yourself to all of your opponents, not just the person you’re
playing against. We’re all here to have some fun and enjoy spending some
time slinging spells with our friends. Let’s make some new ones. Team
tournaments are some of the most enjoyable experiences on the SCG Tour, so
we should all do our best to make sure everyone around us is having a good
time. Even if you’re not doing well or your teammates are losing and you’re
winning, or today just wasn’t your team’s day, don’t sweat it. We’re here
to win, sure. But more importantly, we’re here to have some fun with our
friends.