"What’s in a name? That which we call a rose
By any other name would smell as sweet."

After twenty years (more or less), Magic has built up a large list of "names that matter." When last week’s Uncharted Realms column popped up as "Barrin’s Tall Tale," I had an almost Pavlovian reaction. "Barrin! Barrin! Barrin’s back!" 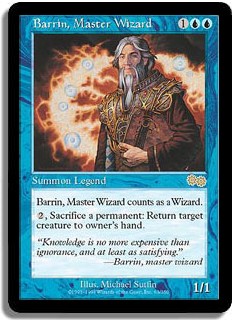 "My friends called me ‘Barrinalo.’"

Alas, this Barrin wasn’t that Barrin—instead of a master wizard, I was reading about a half-entrepreneur, half-drunk who thought he could take on everybody’s favorite* planeswalker Jace Beleren and got a mindwipe for his trouble.

*Not my favorite planeswalker as a character, but definitely the favorite of many players and of Wizards. In the "Drive to Work #3" podcast" just after the half-hour mark, Matt Cavotta describes Jace as "our Mickey Mouse" and "the closest analog to the Magic player." This raises a few awkward questions about which planeswalker is supposed to represent the women and girls who love the game. Tamiyo, the Moon Sage is my best guess.

"Barrin’s Tall Tale" was a good story. Adam Lee can write. Even so, I felt as if my Vorthos chain was yanked a little with the use of "Barrin" as the protagonist’s name, and I let him know that. To his credit, Mr. Lee owned up to the slip—official confirmation for every Vorthos out there: the naming was coincidental—and I came away from our e-mail exchange with a smile and an idea for my next column: character names, with a focus on planeswalkers. What goes into naming a planeswalker, and how do planeswalker names help shape (or unshape) a world?

Phonemes and the Planeswalkers of Innistrad

Speaking of Adam Lee, one of the most valuable Magic worldbuilding articles I’ve read in the past couple of years is his "Phonemes: The Molecules of Flavor." It made plain what I’d intuited about the linguistic themes of Innistrad—that the plane was built around German with a certain amount of draw-in from Dutch (a related language) and French (part of an entirely different language family but that has certain links to German by geographical proximity, most notably in certain German dialects that borrow from French).

One major fly in the metaphorical ointment, though, is the most famous planeswalker to call Innistrad home: Sorin Markov. 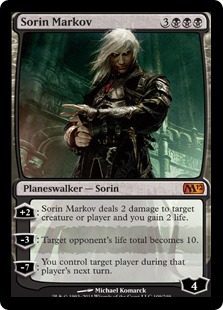 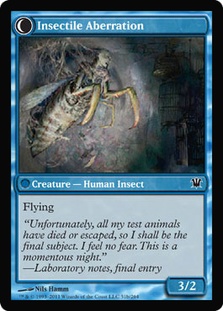 The name "Sorin Markov" does not have its earthly roots in the Benelux nations or Germany but Eastern Europe. His given name Sorin is distinctly Romanian, a fitting language considering the fictitious origins of Bram Stoker’s character Dracula, inspired by real-life monarch Vlad III Dracula "The Impaler." Vlad III Dracula was born in Transylvania, then part of Hungary but today part of Romania. The surname Markov is typically associated with Russia and Bulgaria. Present-day Bulgaria and Romania share a border, so the two names being associated aren’t terribly far off base. On the other hand, present-day Germany and Romania are separated by significant distance; it’s a long drive from Berlin to Bucharest.

I understand the reasoning for leaning toward France rather than Eastern Europe; 18th and 19th century Gothic fiction in Europe (outside the United Kingdom and Germany) was strongest in France. One of the most famous Gothic stories of all time, The Phantom of the Opera, originally was an early 20th century novel by Gaston Leroux. Yet when Sorin Markov was being developed, he first appeared in Zendikar, when Innistrad the plane was scarcely a dream, so he was developed with Eastern European influences. While the Gothic side of Sorin Markov is Innistrad through and through, linguistically he’d be far more at home in Ravnica.

Where Sorin Markov makes initial sense in Innistrad and loses that somewhat with greater study, Tibalt, the Fiend-Blooded runs the opposite way. Like a number of Magic players who had to study Romeo and Julietin school, I immediately jumped to the Shakespearean character Tybalt, the hotheaded relative of Juliet. Hotheaded, impulsive—ok, that makes sense. On the other hand, Romeo and Juliet is derived from an Italian source and supposedly takes place in Italy, which is outside the realms of Innistrad’s inspirations.

There is, however, a double back pointed to in the Wikipedia article: if the character name Tybalt is indeed a reference to the "Reynard the Fox" myths, well, those originated in a French-German borderland and are most common in German, Dutch, and French traditions. You’re safe, Tibalt. You can come out of the two-dollar bin now.

The Five Planeswalkers of Lorwyn: A Thought Experiment

Take the first five planeswalker cards in Magic and forget everything but their first names. Ajani. Jace. Liliana. Chandra. Garruk. That’s all you have.

Only one is beyond reasonable doubt. "Liliana" as a given name is female and almost exclusively so. A male Liliana would be like a boy named Sue.

Two lean male rather than female but aren’t guaranteed to be correct. "Jace" is a shortened version of Jason that didn’t get popular until 1980 or so. For a long time, it was almost exclusively male, but now it’s starting to gain popularity as a female name as well (think names such as Ashley, Peyton, Madison, Dale, and so on). "Garruk" doesn’t correspond to any Earth name I can recognize, but because of a socialization process in the West that associates "harder" or "aggressive" sounds with masculinity, the unconscious feel is for a male rather than a female.

Ajani and Chandra are virtual toss-ups. If the "Ajani" character has an African-styled origin, then Ajani would signify a male, as it comes from the Yoruba people in present-day Nigeria with a meaning that varies between sources but usually relates to fighting righteously. A South Asian-styled origin, on the other hand, suggests a female character because of a name from the Sanskrit relating to noble birth.

"Chandra" poses a flipped issue: in the Hindu pantheon Chandra is a male lunar divinity whose name sometimes is taken for males, as in the late Prime Minister of India Chandra Shekhar and fictional Heroes character Chandra Suresh. In Western countries such as the U.S. and Canada, however, Chandra has become a female name of some popularity, as seen with actress Chandra Wilson and (more tragically) Chandra Levy.

Adding in surnames isn’t as helpful as you might think, either. "Goldmane" doesn’t suggest much besides being a recognizable compound of gold and mane. (Remember, if all surnames were literal, a lot of David Cooks would be making meals instead of being famous.) "Nalaar" sounds as if it’s trying to be Indian, so I’d book Chandra Nalaar as male—and because I have chosen three for male and one for female already, I’ll put "Ajani Goldmane" down for female.

Then I see the actual cards, and… 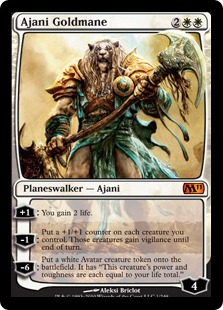 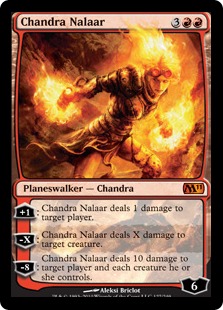 Whoops, I got Ajani and Chandra wrong. It turns out Ajani’s surname is semi-literal, as he’s a leonin without much pigment, while Chandra Nalaar, in spite of all the points to the contrary, is a flame-haired woman. Looking back at my logic, the guesses I made would’ve created two South Asian planeswalkers, so I should’ve rethought based on that implausibility.

Research and references help, but only to a point. If I’d been told that Ajani was a lion-person, I might’ve leaned toward male for him due to "mane" (as only male lions can have them), assuming the surname was literal, but if it wasn’t there are lions in South Asia too. Names can encode a lot of information, but they can’t tell the whole story.

While Magic has shifted its view of planeswalkers from immortal and nigh-omnipotent to mortal with defined powers, as represented by Time Spiral’s "Mending" storyline and the new style of planeswalkers introduced in Lorwyn, there are two planeswalker cards with characters from the "old time" before the Mending. Their sparks have changed, but their names remain the same.

Karn Liberated (previously Karn from the Vanguard set and Karn, Silver Golem from Urza’s Saga) received his name from a Thran word meaning "mighty." (Without getting into too much old lore, the Thran Empire was in ruins long before Urza and Mishra were in their society’s equivalent of diapers. It’d be like me naming a puppy Abuwtiyuw.) So Karn’s a throwback name, a hint of the Thran, which makes sense for Karn’s origins. On the other hand, I’m still slightly disappointed that Teferi’s original name for Karn, "Arty Shovelhead," didn’t stick.

If "Karn" is an old name, though, then "Nicol Bolas" is ancient. Before Commander there was Elder Dragon Highlander, and before Yawgmoth and Karn and all the rest, there was the Dragon War. When the dust settled, only five or possibly six Elder Dragons were left (the lore conflicts). Four of them were siblings: Palladia-Mors, Arcades Sabboth, Chromium, and Nicol Bolas. Number five was a cousin, Vaevictis Asmadi. Nicol Bolas is the last one standing.

I have no idea what the four siblings’ parents were thinking when they broke out the vaguely Latinate, Eastern European, and glam metal band names for their draconic spawn, but whatever thought process was involved surely was less creepy than how dragons were repopulated on Dominaria; of those five survivors, only Palladia-Mors was female, and it’s uncertain whether Piru, Chromium’s egg-laying mate, was the sixth Elder Dragon or a Lesser Dragon descended from the group of five. Either way, that’s one creepy family tree in the early going.

I hope you’ve enjoyed this quick look at a few planeswalkers’ names and some of the tensions involved in creating them. Join me next week for my Dragon’s Maze flavor review. Here’s a sneak peek involving two legendary creatures’ names:

Varolz, the Scar-Striped and Vorel of the Hull Clade: Unless I call them "Scar-Striped" and "Hull Clade," I doubt I’ll be able to keep these two straight. OK, Wizards, normally you do a great job, but what the heck were you thinking with these two guild champions? Not only do they start with the same letter, already a bad sign, but they share four letters total, V-O-L-R, in five- and six-letter names. Maybe everyone in Creative knew the difference after months of working with them. Maybe after months I’ll have some kind of mnemonic worked out. Until then, though, there’ll be a lot of grief over a problem that could’ve easily been corrected.

I’ll have plenty of kudos to hand out next week, too. Until then, as always, thanks for reading.

Selesnya is an underrated color pair in Modern Horizons 2 Draft. Ryan Saxe shows how to draft a Selesnya deck that will make Boros and Rakdos opponents fear you.