I have always believed in love at first sight.

When I was fourteen I started my first day as a bus boy at a local dinner
theatre in my hometown of Naples, Florida. It wasn’t glamorous, but I
wanted money to buy Magic cards or various nu metal cds, so it seemed like
a better idea than sweating to death in 90-degree weather mowing
neighborhood lawns like I had been doing. Each day I was handed a stack of
twenties, it reaffirmed my choice in livelihood, but it wouldn’t be the job
that ended up being my greatest payoff.

She was the same age as me; awkward with braces and long hair, but with the
biggest and brownest eyes you’ve ever seen-so pretty and petite without an
ounce of sin on her. My first thought when she walked by was, “I am going
to fall in love with this girl.” Can you blame me? I was barely a teenager,
and the thought of linoleum gave me shivers in places I didn’t know I had
places, but it turned out I was right. I did fall in love with her from the
moment we started talking. I remember when I gave her my phone number, and
her cheeks blushed into a shade of crimson that hasn’t been seen since.
We’ve been dating ever since, and next month will be our 17th anniversary.

And then there’s Charlie. My little boy. My world. My Charlupa. My
enCharlada. I hate children, but the moment I saw him I felt the most
intense love for something that had ever washed over me. I immediately knew
how to be his father, and I instantly understood the gravity of ensuring
his life over mine. In those seconds I understood what true love was.

Or at least I thought I did.

On January 1st, a batch of spoilers came across the internet, and a new
love sowed its seeds. 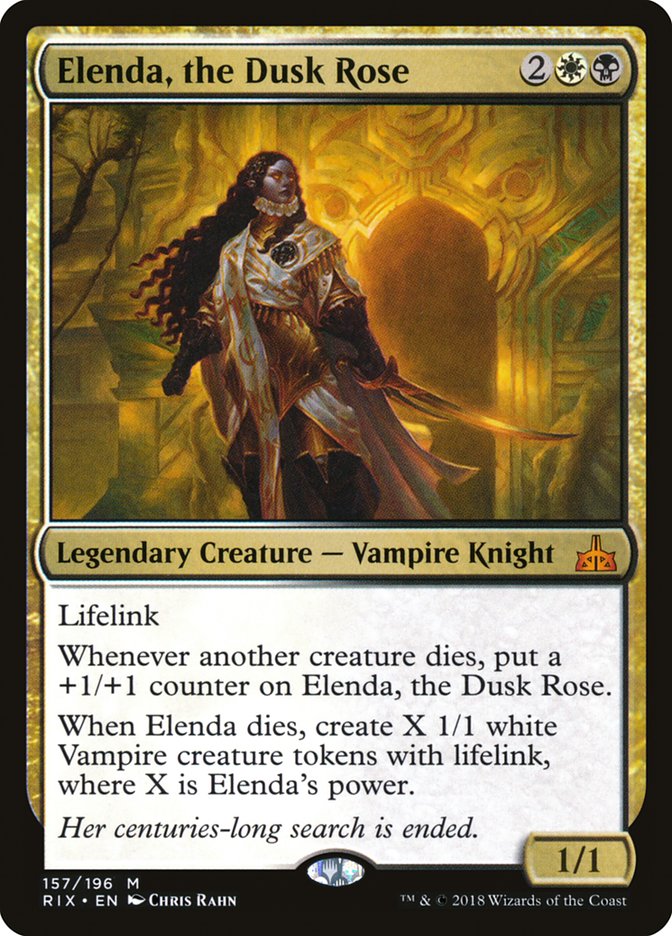 Do you think it’s too soon to introduce her to my parents? I’d say

, but I’m pretty sure Elenda being a Vampire means her heart doesn’t do
that. Buffy taught me that. In the few seconds after I pulled this card up,
I basically went bananas. I messaged my Commander friends and prompted them
to tell me if this card was real or not. It seemed way too good to be true.

On the surface, you don’t need Elenda to do very much in Commander for her
to be good. All the best Anthem effects, sacrificial outlets, removal, and
reanimation spells fall into black and white. My first inclination was to
build Elenda, the Dusk Rose in such a way that I could take advantage of
each of those properties.

My inspiration comes from as far back as 2009. The first big tournament
that I ever did well at was Florida Regionals, and that was with B/W
Tokens. This was a deck that had everything: removal, disruption, huge
swing turns, sticky creatures. It touted powerhouses like Bitterblossom,
Thoughtseize, Cloudgoat Ranger, and Identity Crisis. In short, it was
capable of beating any deck in the field handily. On that day, it did just
that as I coasted to my first invitation to U.S. Nationals. I wanted to
relive that, so I decided that I was going to build B/W Tokens in
Commander.

Naturally, most of the pieces fell into place on their own. The B/W Tokens
archetype is fast, disruptive, and able to control the tone of a game
through overwhelming battlefield advantages. Since your cards often create
more than one creature at a time, removal isn’t as effective. With a ton of
enchantments and spells that increase their power and toughness, a single
card like Conqueror’s Pledge can mean an immediate army of 5/5s or bigger.
The deck actually gains resiliency from Elenda; a simple sweeper
can leave you with plenty of creatures to rebound.

Here is my first draft:

For a rough draft, this deck already feels like it has a lot of very
powerful things going on for it.

The most talked about complaint regarding Elenda is that she falls victim
to the Command Zone. When a General dies, you are allowed to send it to the
Command Zone where it becomes more expensive due to the Command Tax (your
general costing two generic mana more). Almost all decks that revolve
around a particular General or theme would gladly place them back in the
Command Zone so that they may continue casting their selected leader, but
not Elenda. We want her to die.

Over and over again.

Her criticism is that once she dies, she becomes significantly less useful.
In order to take advantage of her pumping out tokens, we’ve included
multiple ways to scooch around that perceived weakness and turn it into a
strength. 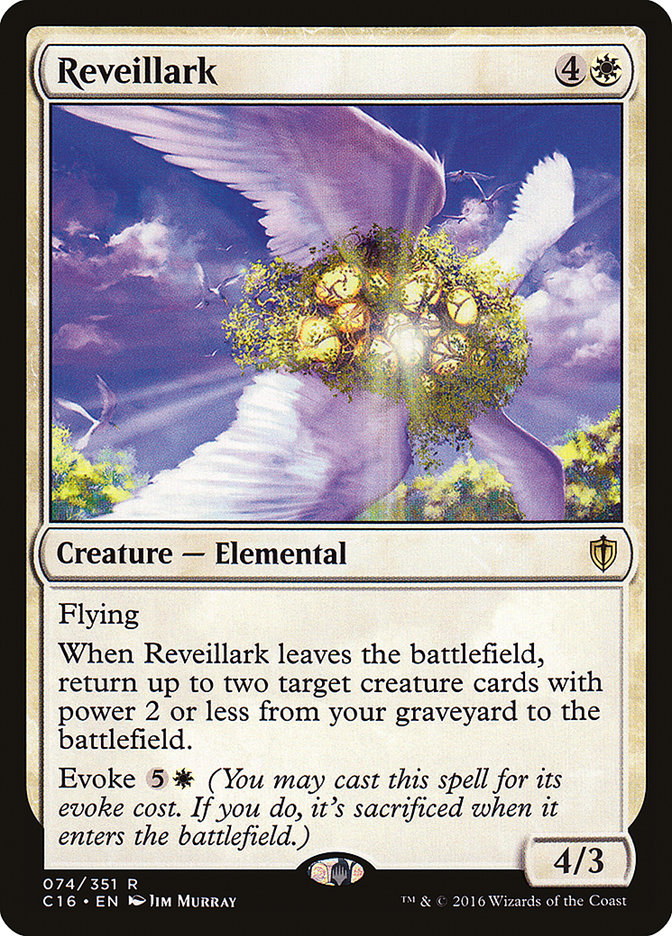 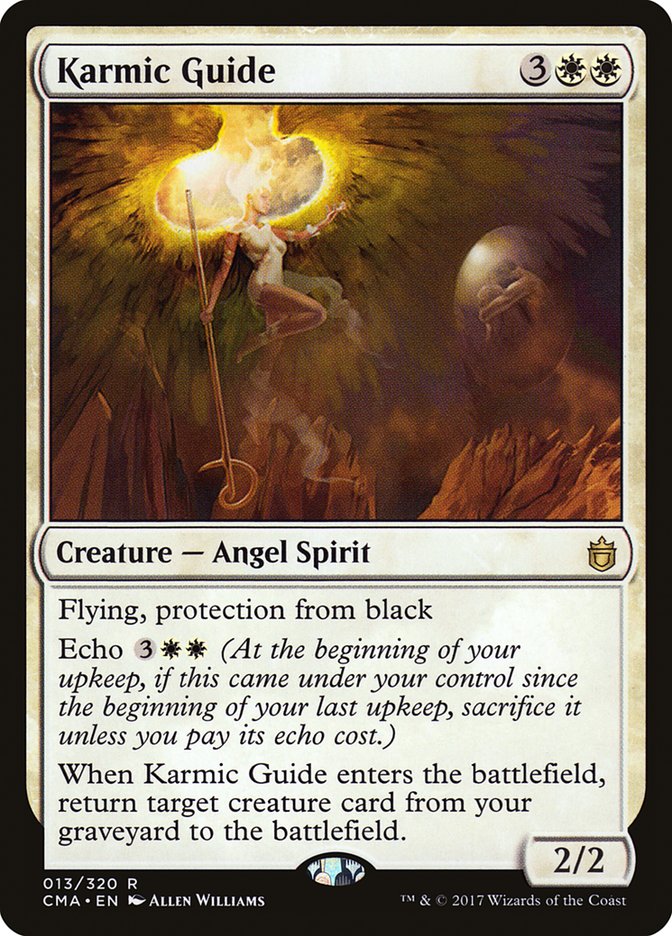 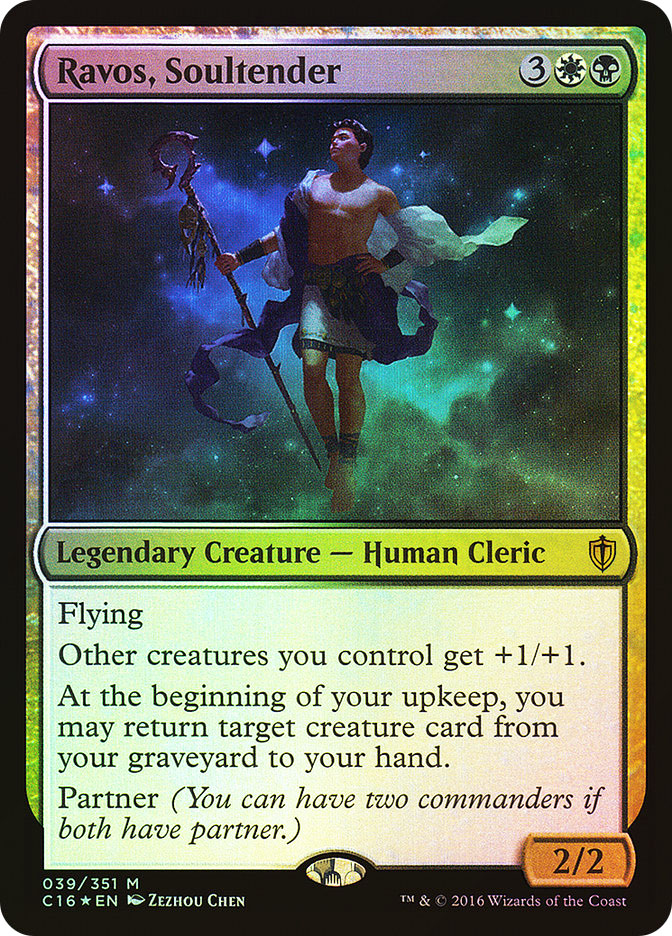 Along with the various tutors we’re playing, there are several options that
will let us bring Elenda back from the dead. One or two instances of her
biting the dust is all this deck should need to power out a win. She’s not
the kind of General we want to throw out on the battlefield as soon as we
can cast her, but instead when there are several Anthems on the battlefield
that are going to let us have her power higher than the menial one it
starts at. To accrue value properly from Elenda I’d be comfortable casting
her from the Command Zone as a 3/3 at minimum, especially onto a
battlefield with Ajani Goldmane or either Sorin so we know we can alter her
power even further.

The Routes to Victory

Elenda needs more than just one way to win a game. At first glance, it’s
clear that you want to swarm the battlefield as quickly and efficiently as
possible, pump your tokens, and kill your opponent through damage. This is
done with a whole lot of token producing spells (20) and almost as many
ways to make those creatures bigger between creatures, spells, and
planeswalkers (17). That’s over 1/3rd of the deck totally dedicated to
flooding the battlefield and beating an opponent to death!

From there, I had to think of a secondary route to victory. When in doubt,
drain them out.

Obvious inclusions that turn our creatures into miniature Fireballs are
Blood Artist and Zulaport Cutthroat, but since we’re B/W we get to play
some truly nifty other affronts to Soul Sisters in the form of Suture
Priest, Pious Evangel, and Campaign of Vengeance. Throne of the God-Pharaoh
also helps in the drain department. Each of these cards work in concert to
give the token deck more reach, as well as ways to gain life and defend
better against sweepers. The thing that the deck is lacking is a
sacrificial outlet to break parity, but the list seems so tight already
that I can’t seem to find an opening or card to take out in place of one.

In early testing this deck is absolutely brutal, and perfectly capable of
handling pod play or 1v1. The combination of speed, efficiency, redundancy,
and consistency all have made Elenda, the Dusk Rose something I’m already
very proud of when it comes to semi-competitive play. She’s not broken by
any means, which is always a relief, but instead she brings a lot of raw
power to the table.

Almost all of the token producers are cheap and work very well on a natural
curve. Usually a producer on two or three followed up with an Anthem is
enough to get the ball rolling. I haven’t quite figured out if the X-spells
are useful enough to warrant a spot in Elenda yet, given that you’re able
to work on a low mana count. That is perhaps one of the best things I’ve
seen this deck do so far-play competitively even when it gets stuck on
lands.

With two-to-four mana, Elenda can still create some very productive turns.
Cheap token creators (like Bitterblossom) don’t require much to get
rolling, and following that up with something such as Glorious Anthem or
Spear of Heliod can give you the necessary pressure to force the opponent
into reacting less favorably. When you start adding things like Anointed
Procession into the mix, the snowball-effect can be deafening and
immediately cause a pod to turn their attention to you. Thankfully there
are quite a few defensive tools. Attrition can help grow Elenda while
taking out anything problematic, and Hour of Reckoning is the sweeper that
this deck loves to cast on to a full battlefield. Newer cards like Sram’s
Expertise give this deck immensely interesting swing turns as well,
dropping three creatures onto the battlefield and allowing you to follow it
up with something like Intangible Virtue or a Lingering Souls.

If you are not a fan of getting blown out by multiple sweepers in a row, or
something like Elesh Norn, Grand Cenobite, Elenda may not be the deck for
you.

I have also found that sometimes it is privy to very anemic draws that an
opponent probably won’t have too much trouble overcoming. In some scenarios
you draw all of your token-producing spells, but no Anthems; in others, all
the pumping spells and enchantments, but very few token producers. While
I’ve found these situations to be few and far between, they are still quite
real and quite annoying.

Finally, the deck can get stuck in very, very mana-hungry draws. While it
operates very well on low resources, there are a fair bit of expensive
cards in Elenda that can clog your hand– namely the few five-mana
enchantments, creatures like Deathbringer Liege, or planeswalkers like
Elspeth, Sun’s Champion. Unlike other decks that play as many as ten or
fifteen mana rocks and accelerators, Elenda is tighter than a drum in
spots, and this version can only afford to play about five of them–six if
you count Ancient Tomb. Closing out a game where your opponent is also
doing powerful things is contingent on you hitting between five and seven
mana consistently. This will give you the option of double or triple spell
casting, which is usually enough to put you ahead or set up your
battlefield to win within a few turns. This type of Magic can be
frustrating to people who are always stuck in the “if I only had one more land” mindset.


As always, I invite you to share your critiques, compliments, and
suggestions to making Elenda, the Dusk Rose a better deck.

Overall, I love the theme and almost all of the elements in this Commander
deck, but I can’t help to think that something is missing. Maybe you can
help with that.

It’s troubling, though, trying to figure out what can make Elenda better.


I just can’t get her out of my head.