We also won’t have a sac outlet in play as early, which can cause problems with creatures we want to sacrifice. Specifically, the play of turn 2 Cartel Aristocrat to protect a Voice of Resurgence from Pillar of Flame isn’t available to us, so if we want an outlet out before playing Voice, we have to wait until we have Varolz, the Scar-Striped in play. Basically, this just means exiling is going to be a little better against us. (Obviously, we don’t have Voice of Resurgence anyway, but a similar case arises with Strangleroot Geist.)

We might want to consider working to get the outlet down earlier, either with Arbor Elf or Farseek. Avacyn’s Pilgrim is an option, but white mana isn’t at a premium.

There’s an interesting tension between the incentive to play acceleration and move up the curve and the desire to keep the curve low to use Varolz, the Scar-Striped to scavenge as our late-game plays and to end with Falkenrath Aristocrat.

Without white, Boros Reckoner will be very difficult to cast. As such, we probably won’t have it. This likely means no Blasphemous Act. Red needs another purpose or to be a very light splash.

Zealous Conscripts is probably the best payoff for going this direction, and I think I’d want to start three or four of them.

I also like the idea of having creatures with a lot of power for their cost because those are always good with Varolz. Those make me interested in Experiment One as well.

The build I came up with before I published here. I think that approach might be reasonable, but I’m going to look at other directions rather than pushing black or Zombies.

Rakdos Cackler is an example of a card I’d like to avoid because it’s bad with Varolz. I’d rather play Diregraf Ghoul or Dryad Militant instead. Let’s start with the considerations.

Many of these creatures are not all that appealing to me. Skirsdag High Priest, while amazing with sacrifice outlets, is not at its best with the higher curve these colors would prefer. Most of the other threes and fours are pretty bad.

That would be 30 creatures, so I could play around six other spells, or a few of those, likely starting with the fourth Zealous Conscripts, could be cut to make a little more room.

Other spells to consider:

So one way to finish off an aggressive version would be:

It’s worth noting that the sideboard doesn’t have Ground Seal or Deathrite Shaman. The plan against Junk Reanimator is just to kill them with Zealous Conscripts and Thundermaw Hellkite.

This build is pretty straightforward. I’m trying to maximize Varolz, the Scar-Striped and Experiment On and generally focusing on attacking rather than doing anything particularly cute.

Another approach would be to try to get cute. Cute enough that I’m going to reach into some cards that aren’t on my list.

Do you know what Treacherous Pit-Dweller does offhand? 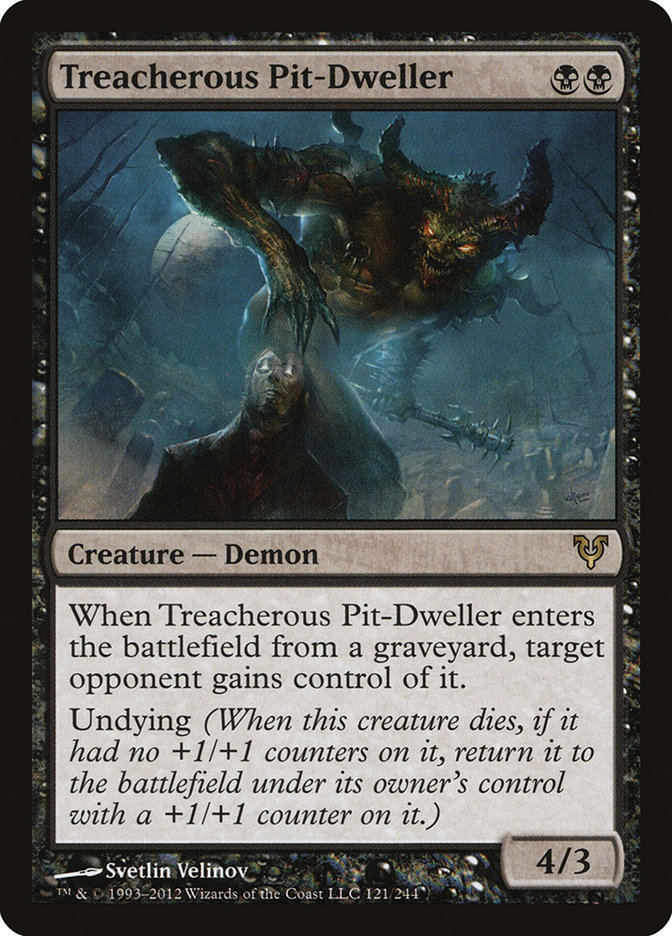 BB is going to require a different mana base than the deck above had. Also, I wouldn’t really want to play Treacherous Pit-Dweller with just eight ways to deal with the drawback, all of which cost more than it, but there are other options.

Do you know the text of Gruul Charm? All three modes? One of them doesn’t come up much, but it does happen to work very well with Treacherous Pit-Dweller.

Ok, I changed my mind about not including a Zombie build. Treacherous Pit-Dweller pulled me far enough into black that it didn’t make sense to me not to go the rest of the way.

I’m concerned about Experiment One in this deck because there are only eight ways to cast it on the first turn (turn 1 Cavern of Souls on Human seems disastrous), but I really want to try it with Treacherous Pit-Dweller and think it’s often going to be possible to play it and a two-power zombie on turn 2 (after a turn 1 Blood Crypt or Swamp).

What really pulled me back into Zombies was Bloodthrone Vampire. I wanted the additional sacrifice outlet for Treacherous Pit-Dweller, but if I have Bloodthrone Vampire I really want Gravecrawler and the rest comes from there. Note that if the opponent can kill Treacherous Pit-Dweller, it’s probably better to play a one-drop and a tapped land on turn 2 and wait to play the Demon until you can sacrifice it unless you have a Gruul Charm.

This deck has less power to break through against big creatures than the first list because it doesn’t have Zealous Conscripts, which is why I have Deathrite Shaman in the sideboard here. I think Junk Reanimator needs it. Also of note, Deathrite Shaman can remove Treacherous-Pit Dweller before the opponent gets it, so it’s possible that more or some main are desired. This might be a reason to build a non-Zombie Pit-Dweller build that uses Deathrite Shaman as its one-drop in the maindeck.

I’m noticing that the build of the deck really hinges on which two-drops you try to use. The next build is based around Burning-Tree Emissary. Burning-Tree Emissary is tricky because it doesn’t play well with black two-drops or Strangleroot Geist, but it’s a good way to get an extra creature to sacrifice into play, a powerful card, and a Human for Falkenrath Aristocrat. What can we do with that? Well, what if we try to push the Human theme to make Falkenrath Aristocrat better?

This build starts looking a lot more like Mono-Red or Naya, and we have to make sure there’s a reason we’re not just playing those decks. The advantages of this deck are that Varolz, the Scar-Striped and Falkenrath Aristocrat make it much more resistant to mass removal and Zealous Conscripts and Falkenrath Aristocrat make it better against big creatures, especially big defensive creatures like Thragtusk. Basically, we’re sacrificing speed to get better against resistance.

Most of the maindeck I think should be pretty clear at this point, but that’s an unconventional sideboard. Let me explain what’s going on.

Pillar of Flame is in the maindeck to slow down other aggressive decks enough that we can compete; the fourth is important in those matchups, so it’s in the sideboard. Bonfire of the Damned and Fog are the other cards that are included to fix those tight racing matchups, especially against Bant Hexproof, where I don’t like any of the other options available to this mana base for fighting them. I’d sooner add a third Fog than cut one of the first two.

There’s no graveyard hate because our plan against any big creatures is to let them come into play and then get around them with Pyreheart Wolf or Mark of Mutiny them. Pyreheart Wolf is nice with the sacrifice outlets and with Lightning Mauler, and I’ve generally been impressed by how hard the card can be to beat when playing a deck that wants to block.

Domri Rade completes the anti-control shell this deck already has built in. Gruul Charm is mostly there for Lingering Souls, but I can certainly see bringing it in to even further punish blocking.

Pushing the Human theme does make me wonder if a four-color build is possible. Avacyn’s Pilgrim helps, and Champion of the Parish, Doomed Traveler, and Cartel Aristocrat are great.

Counting Cavern of Souls as providing mana of any color and Avacyn’s Pilgrim the same as a land, that gives us the following sources of each color:

That looks workable to me, and I really like the spells in this deck. There’s no removal other than Zealous Conscripts, but outside of Blood Artist I’m not really that worried about that. Our creatures are very good at beating other creatures. This is probably the version I’m most excited about, but that’s because it does everything I want to do.

As for the sideboard, Ray of Revelation is for Bant Hexproof; Tragic Slip is for aggro, The Aristocrats, and Jund; Blood Artist is for mirrors and Bant Hexproof; Voice of Resurgence is for decks that try to attack on the ground, counterspells, or use removal that doesn’t exile; and Sorin, Obzedat, and Sin Collector are for control.

Some things that I really like about this deck:

– It’s very good at making Cartel Aristocrat bigger than a 2/2 with Mayor of Avabruck and Varolz, the Scar-Striped

– It uses a ton of extremely powerful cards

I’m so excited about this deck that I need to record a set of videos with it to see if it’s as good as I think.