Seems like a pretty good reason to be playing black.

Black creatures are also some of the best availableâ€”not because of their ability to inflict damage, but because they are actually spells with bodies.
Long before Mulldrifter changed the world of creatures forever, black mages were whipping Chittering Rats and Gravediggers into play (it wasn’t the
battlefield back then, and we had to walk three miles, in the snow, uphill, to get there), providing disruption and card advantage. The fact that black
played well with more black cards drove these decks to monochromatic status, setting the stage for some of the best game-ending spells available to
Pauper.

Why run black in the first place? Sure, disruption is good, and so are big, game-ending spells, but why has Mono-Black experienced prolonged success in
a format ruled by commons? The truth is black has the ability to handle just about everything Pauper can throw at it, and it handles it on the cheap as
well.

Taking a step back, the best decks in Pauper for the majority of the format’s history have been creature-based strategies; even now, the top combo deck
relies heavily on creatures. Since the earliest days of Magic, black has been the best at killing creatures with commons. Being able to remove an
opponent’s creature for half, or even a quarter, of the cost of their investment can generate a massive advantage. Removing the second, third, and
fourth while building towards your own endgame without any investment aside from a land drop is not the fairest thing in the world. And this is
possible thanks to Limited.

Every set needs black removal at common to help push black’s color identity and help balance draft. This creates an abundance of quality removal at
common, so if you are running black, you have access, during deckbuilding, to the right answers for the metagame’s threats. Selecting the right removal
is one of the first challenges in building a proper black deck.

Tendrils of Corruption is a marquee Pauper spell. It undoes more than one turn if cast for fourâ€”the time and mana invested in a creature as well as at
least one previous attack. Black is not the fastest color out there, and the tempo swing provided by a resolved Tendrils often provides the buffer
required to overwhelm an opponent with Rats and Corrupt. Tendrils is at its best in metagames featuring non-Goblin aggro and other midrange decks.
While Tendrils is not a dead card against Goblins (you can always aim it at your own men for a life boost), the combination of Goblin Sledder and Mogg
Raider makes Tendrils an overpriced Terror. Tendrils functions similarly against Affinity if they have a sacrifice outlet (Atog or Krark-Clan Shaman)
on the table. If White Weenie is expecting black, then the four-mana tempo swing is a bad call, since they will likely be packing Order of Leitbur and
Guardian of the Guildpact, in addition Benevolent Bodyguard. That being said, running Tendrils is almost always correct because even resolving it once
can generate an immense advantage.

Doom Blade is a great catchall but is currently out of favor. While it does handle a large number of creatures, the fact that it cannot hit black
creatures is a huge burden. First, Mono-Black is prevalent, and running four live cards fewer than your opponent is just a mistake. On top of that, the
top deck runs on an engine that is partially fueled by a black creature; the fact that, under no circumstances, will a Doom Blade take out a Nightscape
Familiar means that the Blade of Doom needs to ride the pine.

Unmake answers everything, but exiling a creature does not really matter in Pauper, and there are cheaper options.

Disfigure is at its best when you are expecting an abundance of aggressive strategies. Being able to pick off a turn 1 Goblin or early Frogmite can be
critical to surviving long enough to win. Last Gasp and Grasp of Darkness fill similar rolls, with Grasp being the better of the rhyming couplet, as
for the same price, it takes out more creatures. Echoing Decay fills a special niche for MBC, helping to fight token strategies and being an effective
answer to Empty the Warrens.

Innocent Blood, Diabolic Edict, and Geth’s Verdict all fill similar rolls, helping to take out otherwise impossible-to-kill creatures. When control
decks rely on singular threats, these spells see heavy play. Innocent Blood used to see more play as a turn 1 answer, but since the printing of
Disfigure, those instances are few and far between in aggro-heavy metas.

Ghastly Demise and Vendetta are both narrow one-mana answers. The life payment on Vendetta is too high a risk in an environment with as many aggressive
decks as Pauper displays, and Ghastly Demise is not as strong early, negating the efficiency of a one-mana spell.

Finally, Snuff Out, while available, rarely sees play in Mono-Black Control. The fact that the deck does not often tap out, except to win, means that
paying four life to take out a beater is not a value play. Why spend four life when MBC can cast a Rat and leave mana up for a two-mana kill spell? The
lack of play however may also be attributed to the scarcity of Snuff Outâ€”released in Duel Decks, the cost is prohibitive to some players.

These are the removal options for MBC, but they represent only a portion of the answers. The appeal of MBC also runs into the realm of discard and land
destruction. When the top decks are combo, the ability to take out lands and pivotal spells can buy time.

The discard spells of choice vary between Duress and Distress, with the former relegated to sideboard status. Distress, while slower, can take out all
the key spells of Frantic Storm, excluding lands. In a format where creatures matter, whiffing on a Duress is a liability.

The value of turns is one of the reasons that land destruction is often left in the sideboard. While Choking Sands, Icequake, or Rancid Earth on a key
turn can be devastating to Frantic Storm, these cards look downright foolish on turn 3 against Goblins or Burn. Perhaps the “best” spell in this
category is Befoul, but that is because it serves double duty as a removal spell, albeit a glacial one.

The biggest strike against the black land death package is that it costs three mana, and this is when black wants to be playing Rats. 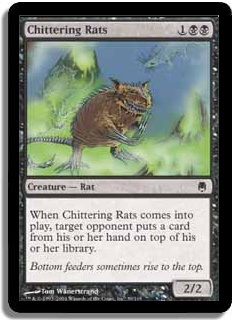 And by Rats, I mean creatures with enters-the-battlefield abilities. These creatures are at the core of Mono-Black and help in the denial game plan.
The only creature that is in every build is Chittering Rats. Its ability is so much more than discard; it is the denial of a draw step. However, the
Rats must be played properly. The goal is not to run it out on turn 3 every time but to cast it when it will do the most damage. The end result is to
take away the draw step that is most needed: the turn before they combo off or the turn before they are setting up to swing for the win. Oftentimes,
this is playing it right on turn 3, as most decks are still starting their game plan at that point. If your opponent is sculpting a key turn, it is
time to play Rats. If they are doing nothing, it is probably correct to hold the Rats back.

The other “Rats,” like the removal, all depend on the expected field. Ravenous Rats are at their best when they can block and soak up damage. Very
strong against Goblins and Affinity, they lose their luster against combo but still have utility. Another popular two-drop is Augur of Skulls, for
times when games are expected to go long, and there will be a need to take out two cards. At the same time, Augur does a better job blocking larger
threats, as it can regenerate.

In the three-drop slot, Liliana’s Specter and Phyrexian Rager vie for spots. Specter is more useful when you want to take away options from the bad
guys, and Rager is better when you want more options on your end. Personally, I try to make space for both, but there are times when maxing out on one
is correct. Cadaver Imp also sees play, but not as much, mostly due to the fact that it costs too much for one power. However, it passes the Unearth
test.

Unearth is a vital card in the new MBC. The old plan was to play Gravedigger or Warren Pilferers to rebuy creatures, but Unearth is far cheaper. Being
able to get a second use out of a Rat at a reduced cost allows for turns where you can Rats twice, setting an opponent back two cards. Considering that
Mono-Black’s game plan is to nip and gain every edge it can, leaving mana up for removal while playing a disruptive threat generates a decent swing.

The final “Rat” that gets consideration is Okiba-Gang Shinobi. Part Blighting and part Unearth, the Ninja shines against control and traditional Storm,
but does not do anything against the Frantic deck, as they are highly redundant and have access to Deep Analysis main to combat discard. Shinobi
represents a swing of at least three cardsâ€”the two lost from the first hit and then the second card from the returned Rat. When the Gang is good, it is
great, but when it is wrong, it is a liability.

Crypt Rats is the other creature that sees regular play. One of the best sweepers in the format, it can answer almost every creature that hits the
board, but at the same time, can put its controller at a perilously low life total. Normally, MBC will have enough removal that it can survive without
Crypt Rats main, relegating them to the bench. However, sometimes the deck must skew towards other forms of disruption, making the mini-Wrath pull its
weight as the primary removal option.

The conundrum of Mono-Black is that it can answer everything. The discard, the land destruction, the removal, and the creatures to which black has
access give Swamp things the ability to meet the format where it is that day. The problem is packing the right sixty. In a format where Guardian of the
Guildpact is the threat of choice, bringing Grasp of Darkness is going to look mighty foolish. Tendrils of Corruption is fantastic, unless everyone has
Goblins. MBC is a deck that requires an intestine and intimate knowledge of the expected metagame. The right list can easily go undefeated; the wrong
list can just as easily go 0-2 drop.

Here is a sample list I use. This list was built with Affinity and combo in mind, moving many of the answers to Goblins to the sideboard:

The goal with this deck is to grind out the opponent, taking away cards and threats and whittling away a life total until Corrupts can be chained
together for a dominating victory.

This is by no means a definitive list but is a good starting point for people looking to exploit the power of Swamps.