It’s your first StarCityGames.com Invitational Qualifier. You’ve made it all the way to the Top 8, and your Abzan opponent isn’t giving you any breathing room. With the other matches finished, tournament officials and players alike are huddled around the game that decides whether or not you’ll have the opportunity to play in the next Invitational.

Your Affinity deck was able to steal the second game with an early Blood Moon, but the matchup is pretty difficult on the draw. Despite a mulligan, you have the following hand staring back at you:

After scrying a card to the bottom (another Springleaf Drum) and the opponent leading on nothing but a Stirring Wildwood, the light at the end of the tunnel begins to get a bit clearer.

Welding Jar off the top? Now they can’t even Abrupt Decay your Cranial Plating!

After vomiting everything but the Cranial Plating onto the battlefield on your turn, your opponent lets out a deep sigh.

“Sorry it has to go this way.” (“What could they possibly…”) 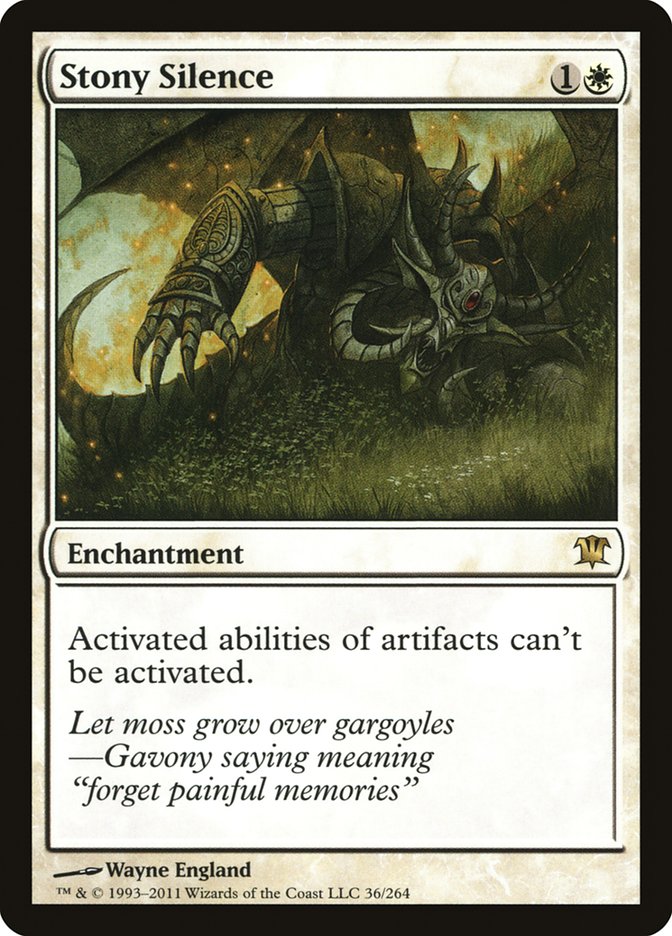 It turns out the light at the end of the tunnel wasn’t leading to victory.

What a great way to end a game of Magic, am I right?

Hate cards in Magic are incredibly overpowered answers, with their biggest drawbacks being related to how narrow they are.

Stony Silence is nigh-unbeatable in an embarrassingly frequent number of positions, but only for two to three decks in the format.

Modern in particular is a format with an incredibly wide range of hate cards that see reasonable amounts of play:

Each and every one of these cards has a particular archetype or overarching theme that it shines against, in spite of being not-so-good against a majority of the field.

Hate cards see more play in Modern than any other format (Legacy and Vintage included). A reason for that is in part due to the difference in power level between the threats and answers in Modern.

In my Modern Is Wonderful piece, I brought up how much stronger most Modern decks have better gameplans than midrange and control decks have answers. In the opening of this article, the draw that the Affinity player had would require a very specific set of circumstances for them to lose…if not for the existence of cards like Stony Silence. Cards like Kataki, War’s Wage; Grafdigger’s Cage; and Blood Moon being legal mean that it’s okay for Mox Opal; Prized Amalgam; and Valakut, the Molten Pinnacle to exist.

Despite their overt power level, hate cards aren’t always the best thing to just shove into a sideboard. It would look rather strange to register the following sideboard:

Naturally, hate cards can be made use of as sideboard cards to hedge against an expected metagame; this comes in handy at local game stores, where the field may be smaller than at a large event, and more predictable as a result. Outside of the aforementioned series of criteria, hate cards are best used in one of a few circumstances:

The first example is something that I touched on last week while talking about Goryo’s Vengeance:

In this deck, it’s quite hard to sideboard out more than four to five cards in any given matchup, because all of the cards in the deck serve different roles: Griselbrand is the main engine, Goryo’s Vengeance provides explosiveness, and Worldspine Wurm pulls double duty by comboing with Nourishing Shoal and Through the Breach. It’s hard to justify cutting very many cards. As a result, the sideboard is flooded with powerful, albeit narrow, cards.

All of these cards have an effect that is the best at what it does, but each of them only does one thing. Shatterstorm is only going to be useful against Affinity and Lantern Control; Blood Moon is generally only being used against Valakut, the Molten Pinnacle or Urza’s Tower and its ilk; Boseiju, Who Shelters All against the decks that lean on countermagic; and Laboratory Maniac against the decks that are gaining arbitrarily large life or giving themselves hexproof (thus making a damage win difficult).

As is the case with most linear decks, the cards out of the sideboard are primarily meant to prevent players from interacting with the Goryo’s Vengeance deck’s gameplan.

These kinds of decks actually tend to be the problematic archetypes that require entire sets of hate cards to be dedicated to them. Dredge is a recent example of this.

Dredge’s recent results in Modern have led to a significant upswing of cards that are included in sideboards to do nothing other than beat graveyard strategies (with Dredge being Public Enemy Numero Uno).

Many decks are forced to play these kinds of cards or risk facing down multiple Prized Amalgams as early as the first turn, or Griselbrand, or something else that fits into Richard Garfield’s ideal world of Magic: The Gathering.

The third type of deck was a little more difficult to word in such a way that covered several decks, but look at this:

Only one copy of Kataki, War’s Wage? Chord of Calling makes it feel a lot more like five copies of Kataki. How many copies of Kataki does the playset of Collected Company count for? Decks with a higher density of tutor effects or ways to rifle through their library are able to cheat a little bit on the quantity of hate cards dedicated to a single archetype.

This segues into another point about the quantities of hate cards that should be played in a deck. When something is incredibly narrow, and there isn’t a great deal of filtering in a deck, playing a single copy of a hate card is generally going to be wrong.

Hate cards, in general, are going to only be used in one to two different matchups. This means that that slot in the sideboard could be used on something more versatile. By using that slot on a narrow card, it means that, on top of the slot being used on something incredibly narrow, it’s unlikely that the card is even drawn in the matchup! There are naturally always going to be exceptions to this rule, but when trying to figure out if throwing a Back To Nature in the sideboard “for the heck of it” is correct or not, I’m gonna go ahead and save you some brain power: it’s not correct.

For many people reading this article, hate cards aren’t that much of a problem. If you’re playing a fair deck, then there aren’t hate cards that matter against you. Why worry about it, right?

Despite playing a G/W Hatebears deck, it’s still possible to get tagged by an opposing Ensaring Bridge. Chalice of the Void with a single charge counter can blank a full half of the spells in a fair deck. Grafdigger’s Cage may be in the sideboard to turn off Prized Amalgam and Griselbrand, but it also can hurt cards like Collected Company, Chord of Calling, and Lingering Souls.

Part of the power of hate cards in Modern is that there are so many of them. There being a wide variety of hate cards to choose from is going to lead to a subset of them having splash applications against other strategies.

The first step to figuring out how to beat these cards is figuring out which cards affect the deck you’re playing. Be honest: everything in Modern is doing something busted. Decks in Modern are so powerful that there has to be something relatively degenerate about a deck in order for it to compete. Jund is about as fair as it gets, but it still can have its mana attacked with Blood Moon.

After determining what hate cards can meaningfully impact your strategy of choice, it becomes easier to figure out how to sideboard against the cards in question.

The initial angle of attack is to sideboard in interaction that can hurt the opponent’s ability to turn off entire portions of your deck. When playing something that’s easily hated due to its linearity, it becomes second nature to pre-emptively bring in answers to the most common hate cards.

While playing Dredge, it’s pretty rare to not bring in Abrupt Decay after the first game. It doesn’t hit every single hate card, but it will hit most of them and at the very least will knock a creature off of the battlefield. After figuring out more specifics of what the opponent is doing, it’s easier to fine-tune the sideboarding and adjust accordingly.

Another approach to devaluing the opponent’s hate cards (particularly the ones with splash damage against fairer archetypes) is to try to reduce the number of cards that the hate cards affect. If the opponent is bringing in Grafdigger’s Cage to interact with exclusively Snapcaster Mage (and you aren’t playing something that deals with artifacts), it may be reasonable to leave a copy or two of Snapcaster Mage in the sideboard.

Even without having the proper tools to dismantle the opponent’s gameplan, it can also be reasonably effective to play your cards in such a way that they matter less. If Ensnaring Bridge is a central piece of the opponent’s plan against your creature-based strategy, make sure to value Noble Hierarch accordingly. Stony Silence is an incredibly powerful Magic card…until Affinity brings Signal Pest, Master of Etherium, and Etched Champion to the table.

Aggressively mulliganing post-sideboard is a cruelly underrepresented idea in Modern. The cards are so polarized in power level that having a cohesive gameplan in the face of prospective hate cards is generally going to be worth being down a card. The opponent is going to be down a card for their hate card (that you’re ideally compensating for) anyway, so it’s easily justified to mulligan to a hand that is more likely to beat the opponent through their “perfect” gameplan.

All of this really comes down to having a knowledge of Modern as a format and applying that knowledge in as many ways as possible. Play games of Modern. The format is great, and you’ll be rewarded for doing it. Most the pillars of the format are still going to be there the next time you play it. The fact that Infect and Dredge are still kicking around post-Aether Revolt bans is evidence that decks don’t just die.

Translating past experiences and format knowledge to in-game percentage points is the best way to take your Modern game to the next level. People aren’t just blowing smoke when they say that a player’s experience with a deck generally outweighs a deck’s power level. A lot of that has to do with understanding mulligan decisions and leveled thinking in sideboarding. Playtest against as many Modern strategies as possible to increase the odds that your next venture into Modern is a successful one.