I don’t remember that ever happening, but I definitely don’t doubt it did. Whoops! As you can tell, choosing what deck to play for me is kind of an exact science. It’s always a long and drawn-out inclusive process involving much trial and error. It’s never based on my current whims or fancies.

At any rate, we were both on board. Get “expletive deleted,” Elixir of Immortality. Kiora’s the new sheriff in town. After making a number of changes to the list, we arrived at the following:

The deck was good. Bant Walkers, which is basically just U/W Control with a splash of green, has a very good matchup against a lot of decks in the field. It’s easy to win game 1 versus a lot of decks, such as Mono-Black Devotion, when they have a bunch of dead cards against you in the first game. Then in games 2 and 3 you can board into a radically different deck and surprise them again. Even if they leave in removal, they are risking having dead cards in hand while you ramp up into Sphinx’s Revelation.

Likewise, after you smash a deck like Mono-Blue Devotion in game 1, you can board in cards like Archangel of Thune and Pithing Needle and really attack their post-board plan against you. If they leave in something like Rapid Hybridization, they might get stuck with a dead and not proactive card against you if you don’t have an Archangel.

Pithing Needle is a highly underrated card against Mono-Blue Devotion. For one, hitting Mutavault really shuts down their Bident of Thassas from being effective since Supreme Verdict does a great job of keeping creatures off the table. Secondly, they typically sideboard in Aetherling or Jace, Memory Adept, both which bite it to a Pithing Needle. Finally, naming Thassa, God of the Sea can make Elspeth, Sun’s Champion actually unbeatable for them.

Kiora was great in the deck. Besides providing another (sometimes temporary) answer to cards like Blood Baron of Vizkopa and Stormbreath Dragon, Kiora also ultimates very quickly. I didn’t use Kiora’s -1 very often because she typically was on pace to successfully ultimate when I cast her. I ultimated her something like six times over the course of the event. By round 3, I had ultimated all three of my planeswalkers at least once. Huzzah!

She is also a great answer to Mutavault. One of the most annoying things about playing cards like Jace, Architect of Thought is how he can immediately die to a Mutavault if you -2 him. That leaves you in an unenviable position where you either +1 Jace and risk losing him to a Hero’s Downfall without netting you any value or -2 him and get value but also let your opponent freely kill him with Mutavault. Kiora can target Mutavault and prevent it from dealing any damage, which is nifty. She can also help shut down Gods like Purphoros even if they aren’t creatures.

The sideboard plan of Brimaz and Archangel of Thune isn’t exactly unexpected, but even if your opponent knows it’s going to happen, can they beat it? Do they leave in Mizzium Mortars? Do they keep in Doom Blade? Having access to these cards in your sideboard puts the pressure on your opponent to figure out how to handle the variety of threats you can present in a post-board game along with the kind of game plan you can already present, which is big Sphinx’s Revelations and lots of planeswalkers. Can they beat both?

I felt very far ahead against most decks. The exceptions were against G/R Monsters and against other control decks. G/R Monsters has such a high density of threats that tax your Detention Spheres. I feel like Bant Walkers has better game against it than something like pure U/W Control thanks to the power of cards like Elspeth against them. Still, it isn’t a great matchup. I went 1-1 against it in the tournament, feeling a little lucky to win the first time and a little unlucky to lose the second time. Ultimately, it’s a close matchup, but I wouldn’t wish to play against it.

Other control decks have more countermagic than you do and also tend to have more resilient threats. Cards like Aetherling and Elixir of Immortality are vulnerable to countermagic alone. Cards like Kiora and Elspeth are not only vulnerable to counters but also to cards like Detention Sphere and Glare of Heresy in Elspeth’s case. Kiora and Elspeth also take a while to get going, which means your opponent has time to find an answer.

Ultimately, I think the deck is still good, but it needs some changes if you want to battle with it in a field full of U/W Control decks. I recommend trying out a list like the following:

This list isn’t far off from the last one. The main difference is that I’ve cut an Elspeth from the maindeck to make room for an Aetherling. I actually hate cutting Elspeth since I think she is probably the best card in the deck, but I’m hesitant to cut any of the two-mana spells because the list already has a very high curve. Depending on the expected metagame, I could easily see any of Last Breath, Syncopate, Kiora, and Azorius Charm being cut instead of the Elspeth.

At any rate, I want an Aetherling in there. Generally, against other control decks you establish some sort of early momentum thanks to your planeswalkers, but ultimately they end up taking control of the game late since you can’t really close very well and they have a better endgame. Aetherling can really punish them. By forcing them to counter your early threats, you leave them short on what they need to deal with “the Ling.”

Mistcutter didn’t make the cut. You won’t find me misty eyed about it. I wasn’t even boarding in Mistcutter against Mono-Blue Devotion because the card doesn’t really fit into your game plan against them. Sure, you can bash them unabated for four or five points a turn, but the game isn’t a race. On defense it’s just a glorified wall.

Against other control decks it can be very good in certain scenarios, but frequently it isn’t. The thing with cards like Mistcutter Hydra is that if they don’t actually completely kill your opponent then they did the equivalent of absolutely nothing. The damage gets erased by Sphinx’s Revelation. If they know you’re also boarding in cards like Brimaz, they might keep in Supreme Verdict, and Elspeth, Sun’s Champion beats both Brimaz and Mistcutter as well.

Ultimately, I think a plan involving Aetherling is a bit more robust. Use early pressure to put your opponent on the back foot and then sneak in an Aetherling that you can ride to victory.

As it turns out, though, Bant Walkers isn’t the only deck that has caught my eye.

If there is one thing I hate more than anything else, it’s losing to UW Control. I’ve prided myself on beating the crap out of that deck more often than not since the printing of Sphinx’s Revelation. Losing twice to it with Bant Walkers was enough to push me toward something I’ve been neglecting for a while.

Mono-Black Devotion’s stranglehold over the format relegated a good friend of mine to fringe playability. Now that Mono-Black isn’t quite as ubiquitous anymore and we’re starting to see the rise of U/W Control variants along with decks like G/R Monsters, I think it’s time to turn our attention away from cards like Blood Baron of Vizkopa and start focusing back on the real king: 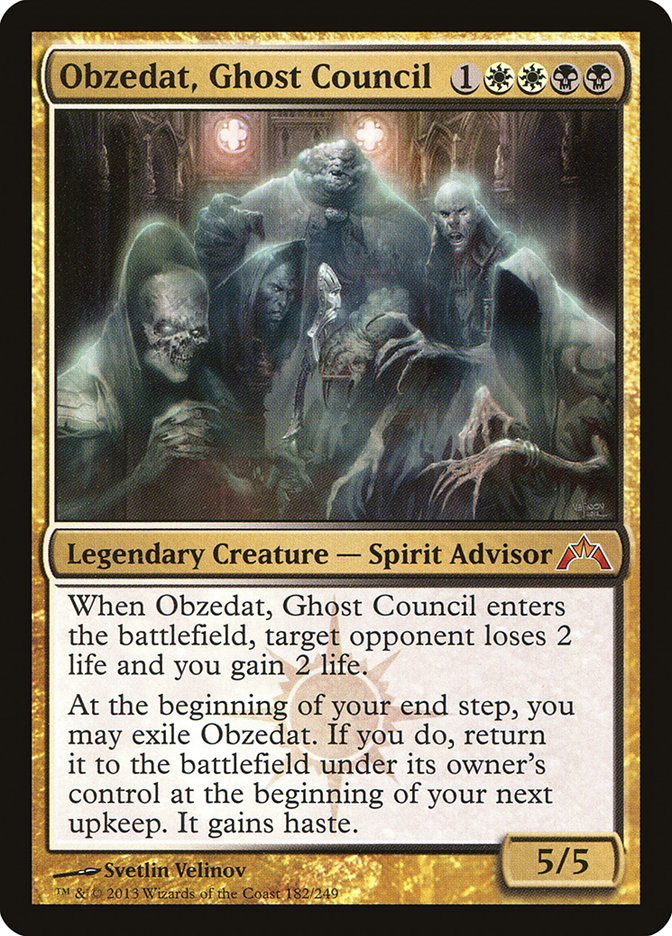 The Obzedeezy. The Obzfather. Or as I like to call him, Daddy. Nothing really beats the crap out of a deck like U/W Control more than Thoughtseize into Obzedat. And I for one love everything about it. Obzedat might not have been great against Devour Flesh, Hero’s Downfall, and Dark Betrayal, but he is certainly quite at home against Supreme Verdict and Detention Sphere.

The great thing is that B/W Midrange is actually really good right now. And most lists aren’t even running Obzedat maindeck. The format is already in a great place to get destroyed by B/W Midrange, and I feel like the archetype still has plenty of room to grow. B/W can be made better, and I think the first step is to add Obzedat to the maindeck.

Five different B/W decks made the Top 8 of the two big events of last weekend: the Sunday Super Series Championship in Seattle and the SCG Standard Open in Nashville. Out of the five lists, this is my favorite:

While Blood Baron of Vizkopa is a good Magic card in certain metagames, it ends up being exactly that: a metagamed card. Frankly, I don’t think the Baron is that great right now. It may be good against Mono-Black Devotion, but it’s pretty mediocre against Mono-Blue Devotion and downright awful against G/R Monsters. I would rather have Obzedat against both of those decks, and Obzedat is definitely superior against U/W/x Control as well since it doesn’t die to Supreme Verdict or Elspeth’s -3.

If I were to build B/W Midrange, I would want a list that looks something like this:

While this list loses some game against Mono-Black Devotion in game 1 without having access to Blood Baron of Vizkopa, I feel like it is much improved against control and G/R with access to Lifebane Zombie and Obzedat. Against G/R Lifebane strips a key card from their hand and pressures their planeswalkers. Obzedat is a strong finisher since it’s hard for them to outpace the life gain and pressure Obzedat provides while you’re also throwing a bunch of removal spells at their creatures.

This list might also be a little weaker against hyperaggressive decks without access to Last Breath and Blood Baron to recoup some life loss, but those decks are not particularly popular right now and did not put up good results. I think it’s worth worsening a few matchups to improve against the majority of the field.

Another option to consider is making it more of a pure W/B deck. That means including things like Brimaz, King of Oreskos and Archangel of Thune, two cards that are very good right now. The mana is already pushed enough to cast both Obzedat and Elspeth. What’s a few more white cards? I would certainly look to trim some Mutavaults to make the mana easier, but ultimately I think the idea has a lot of merit.

If I were attending the Open Series in New Jersey this weekend, I would probably play something along these lines. The exact card choices would certainly depend on more testing, but I definitely think Obzedat is very strong right now and a great place to start. Alas, I will be en route to Valencia to test for the upcoming Pro Tour, but part of me wishes I could be there, if for nothing else than to resolve Obzedat against U/W Control one more time and see the life drain out of their face . . . literally.