Back in November, I came up with a fun variant of EDH called Commander ’95. This format that uses just cards printed through Homelands (in 1995) was a lot
deeper and more diverse than anyone thought. I played a ton of C95 and wrote a bunch of articles on it.

Here’s a quote from one of those articles…

“I have always wanted to play Hazduhr as a general, so now I’m thinking about trying him out. Here’s one of the best ways I can sell someone on playing
Commander ’95. Hazduhr the Abbot might be a
really good Commander deck. Hazduhr control for the win-it’s Abbot-lutely fun!” – Abe Sargent, Commander ’95 Metagame.

So, there’s one reason to play Hazduhr in a C95 version. 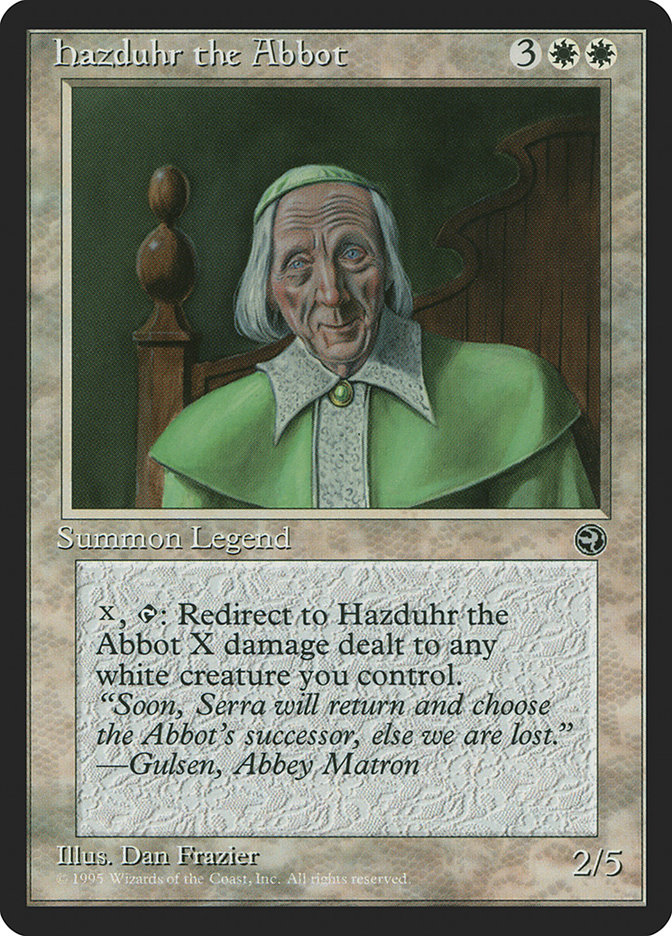 Now, I’ve also started this series of Impossible Commanders where I build an EDH deck around one of the more difficult EDH generals out there. I began with
Mannichi, the Fevered Dream and then moved to Brothers Yamazaki. I have been soliciting ideas for future Impossible Commander projects.

Of course, Atalya, Samite Master is even better which makes Hazduhr a lot of fun! He already sucks! That makes this commander project quite intriguing to
me!

Well, with all of that Hazduhring love, how could I not build a Hazduhr deck? I am using just cards printed up through Homelands from the
Commander 1995 format. Get ready for the awesome…

So, let’s take a look at some of the fun cards were added to the deck.

To begin, we have some of the most iconic cards of this era. Serra Angel was one of the best creatures during the first year or two of Magic. Serra Angel,
Sengir Vampire, Mahamoti Djinn and especially Shivan Dragon were the most iconic creatures of the era. We’ve got one here, joined by other cool dudes like
Seraph and Thunder Spirit.

After that I had a few directions to take the deck. I decided to push a bit of an aggressive theme because we have access to Order of Leitbur, Savannah
Lions, and White Knight style cards. I didn’t add in every Benalish Hero, Tundra Wolves, or Icatian Scout. But I did slide in useful guys that can pump the
team (Icatian Lieutenant) or an individual (Icatian Priest). In headed Crusade and friends.

So the deck has some early game. I then added in some vital artifact creatures to fill some spots. Clockwork Avian gives me another solid flying body and
Juggernaut or Su-Chi are nice to drop behind the smaller stuff and ramp up.

The format doesn’t have a lot of creature removal in white. It’s just Swords to Plowshares and Wrath of God. So I tossed in Icatian Javelineers, Hand of
Justice, Serrated Arrows, and Triskelion. Icy Manipulator can tap an annoying dork and Tawnos’s Coffin can pull it off the field for a bit. 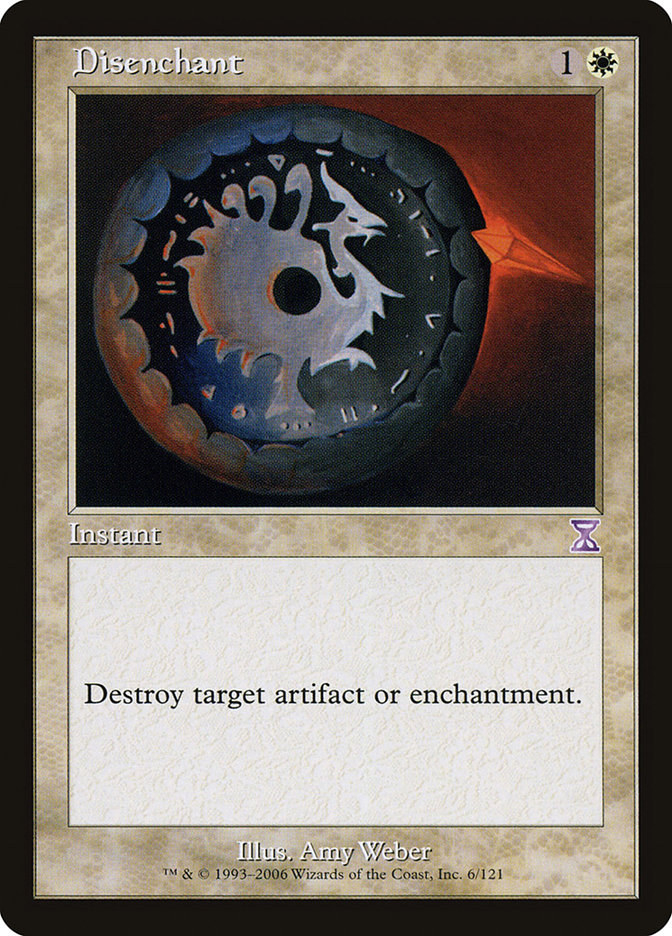 I also added in the essential Disenchant. There is little targeted enchantment removal, so if you have access to it, it’s vital. We also have Dust to Dust
and Divine Offering for more artifact hosing.

Our own enchantments/artifacts are interesting too. Jayemdae Tome and Disrupting Scepter are two cards I lean on heavily. Every single C95 deck I’ve built
runs both. Other players I’ve encountered also play them with aplomb too.

That’s a lot of stuff!

Then add in the recursion of Resurrection, tricks like Army of Allah or Lightning Blow, and I even included two great defensive creatures, Wall of Swords
and Dancing Scimitar, that stop just about anything flying.

Now, there was one final trick I wanted to run. Hazduhr can tap to pull damage that would be dealt to a white creature to himself. So for example, consider
Veteran Bodyguard. He will soak up all of the damage unblocked creatures would deal to you. But what if he takes five or more damage and dies? So if he’s
taking seven damage, split it up between him and Hazduhr, so both will survive! The same trick will work with Kjeldoran Royal Guard. You can also use
Alabaster Potion as a backup. I’m not sure what the rule is for Reverse Damage. If I Reverse Damage an attacking Sengir Vampire with an untapped Bodyguard
out, will I gain the life? Will the Bodyguard take the damage? If it does work, and you can save the Bodyguard from damage and gain the life too; that’s a
useful card!

You might want to add in Aladdin’s Ring, Jandor’s Ring, Martyrs of Korlis, Jade Monolith, and such. Anyways, what did you think? Let me know!

Now suppose that you aren’t really interested in Commander ’95. You might think this was a cop out or something. Where would I go if I was not limited to
cards in the 1993-1995 era? 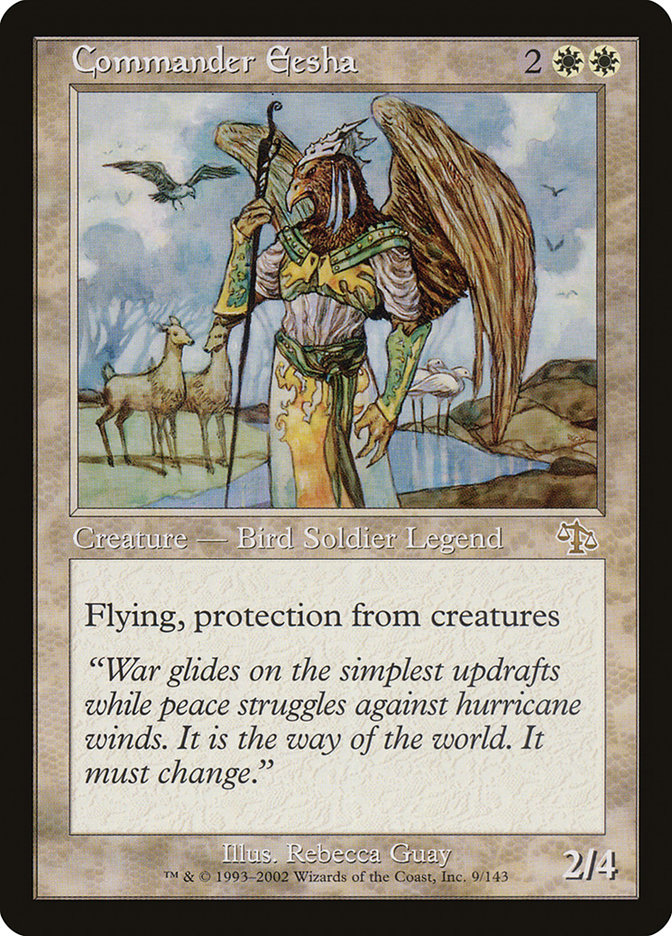 I would flesh out the idea of moving damage around (or preventing it altogether) with cards like Worship, Cho-Manno, Commander Eesha, Pariah, Pariah’s
Shield, additional bodyguards, and then use Hazduhr as an ur-damage preventer and re-assessor. Maybe even Bubble Matrix or something.

Anyway, there’s the final modern take on Hazduhr and friends. It has winning conditions (horsemanship, Cloak, etc) to assist after mugging up the ground.
It’s a hard deck to crack with an attacking force. No matter what you do with your sneaky little Commanders, or your
shadow/horsemanship/unblockable/intimidate/fear/pro white forces, we’ll still run damage-free as it hits a Veteran Bodyguard or Commander Eesha off a
Pariah’s Shield.

And always let me know if you have some ideas for other impossible commanders! Just post away!