I had the privilege of representing the community in the Magic Online Community Cup this weekend. And I have to tell you, those guys may have some rust on
them, but they are surely not pushovers. The entire weekend the scoreboard was close, and we barely pulled off a win in the final segment of the second
day. It was a stressful but extremely gratifying experience and one that I wish I could do again.

Enjoy your foil copies of Survival of the Fittest online!

Sunday, the community team got a unique opportunity to play with Khans of Tarkir a full week before everyone else at their respective prereleases. We had a
sealed prerelease with the eight of us which Sean Plott ended up winning. Given how many different competitive
games he plays, it was quite amazing how fast his learning curve went into overdrive to pick up the Khans Limited format so quickly to beat the rest of the
Community team.

For those of us that were out of contention of our 8-man or waiting on our matches to start, we had a chance to draft Khans of Tarkir and fire some 1-on-1
Sealed queues against each other on a private Magic Online server. We definitely built more Sealed decks and drafted more than we had time to actually play
the games, but getting the flow of Limited gave some good insight on what the future prereleases would bring. Today I’d like to give my first initial
impressions of Limited for the set.

Two drops are extremely important, especially ones with two power. You want to get a jump on the game before the inevitable turn 3 morphs come down. There
aren’t many morphs that punish you for attacking into it early and often you can press the pressure of your early two-drop for 6-8 damage. I expect cards
that may come off as unplayable at first like Wetland Sambar to become as a pleasant of a sight as we learned Bronze Sable to be.

Removal that’s capable of killing an early morph is really good. Shock was an all-star in Onslaught Limited and Debilitating Injury is the next best thing.
Even something unassuming like Highland Game will get your game on the right foot towards staying proactive. I’ve lost more games so far to not being able
to play all my spells than not, and as the format develops I imagine decks will get even faster.

Value your Three-Drops Lower Than Usual

Creatures like Kheru Bloodsucker and Abzan Falconer are above the power curve in other sets but now have to compete at the three-drop slot with all the
morphs in your deck. Granted 2/3s for three mana matchup decently with an opposing morph creature but will force you to play your morph at a later time,
often for its full casting cost or to miss a critical spot on your curve.

The banners are in an awkward spot for this reason as well. I predict that Sultai Banner will be the best of the bunch as your spells tend to have higher
costs, and ramping up to five will be reasonable. Also sacrificing the Sultai Banner to add a card to your graveyard for future delve will come up
occasionally. However, if you need the fixing you have to stick a few in your deck to compensate.

Khans Limited is an Eighteen Land Format, At least

I asked Adam Prosak how many lands I should be playing and he replied “eighteen, at least.” All eight of us on the community team
incorrectly built our Sealed decks with the default seventeen lands and immediately regretted it. The format is rather slow and there is a fair amount of
incremental lifegain in the “refuge” land cycle which nullifies the tempo loss that an enters the battlefield tapped lands brings. You want to be able to
unmorph your morph creatures, and the delve cards have obnoxiously high natural casting costs so you want to bridge their gaps with mana when you don’t
have enough cards in your graveyard.

Onslaught Limited was similar and eighteen lands was the bare minimum. Ninteen is reasonable in many decks, and going up to twenty isn’t out of the
question either. I had twenty once in Onslaught when I also had Insurrection in my deck, and I imagine having an expensive but powerful spell like that or
having cards that unmorph for seven like Thousand Winds, that you’ll be happier to have more lands than not.

That mainly depends on what you’re looking to accomplish. Since the format is rather slow, or at least plays out that way before people get a good grasp on
mana-curves and mana-bases, Abzan and its outlast mechanic naturally plays the best for longer games so that’s my current pick for the best clan going into
the prerelease weekend.

Jeskai is a very tricky clan that requires a good balance of creatures and instant-speed spells. Because spells are so necessary for the prowess mechanic
and the clan functionality in general, I can see how you may draw a shortage of creatures and get stuck with spells in hand without much board presence. I
think the optimal number of creatures for a Jeskai archetype is 10-12, which is dangerously low but necessary to function the most fluidly.

Sultai is the most complex clan with a range of powerful spells that are fueled by extremely low-impact and unimpressive spells. Scout the Borders,
Taigam’s Scheming, and Bitter Revelation are necessary common enablers that don’t add to your board presence. Sultai is functionally a ramp deck where you
spend your early turns accelerating out a bigger future play like Hooting Mandrills or to pull ahead with a Treasure Cruise.

Mardu is the most simple of the clans to pilot as raid doesn’t take much to enable or use correctly. For the early weeks of Khans of Tarkir’s release I
expect many decks to run cards that are too inefficient to keep up with the speed that Mardu offers. I anticipate many people to do well with Mardu at the
prereleases before everyone figures out the format.

I really like how red, blue, and green play out in Limited environments but am skeptical of Temur. Ferocious as a mechanic seems like a “win more”
situation more often than not. If you have a four-power creature in play you’re often doing pretty well, and if you don’t your ferocious cards aren’t
helping you catch up in any way. I’ve been particularly unimpressed by Savage Punch, as either the creatures you have in play are too small to fight or you
have a huge creature and the ferocious +2/+2 bonus is overkill.

Will Anything From Khans Make its Way into Legacy Infect? 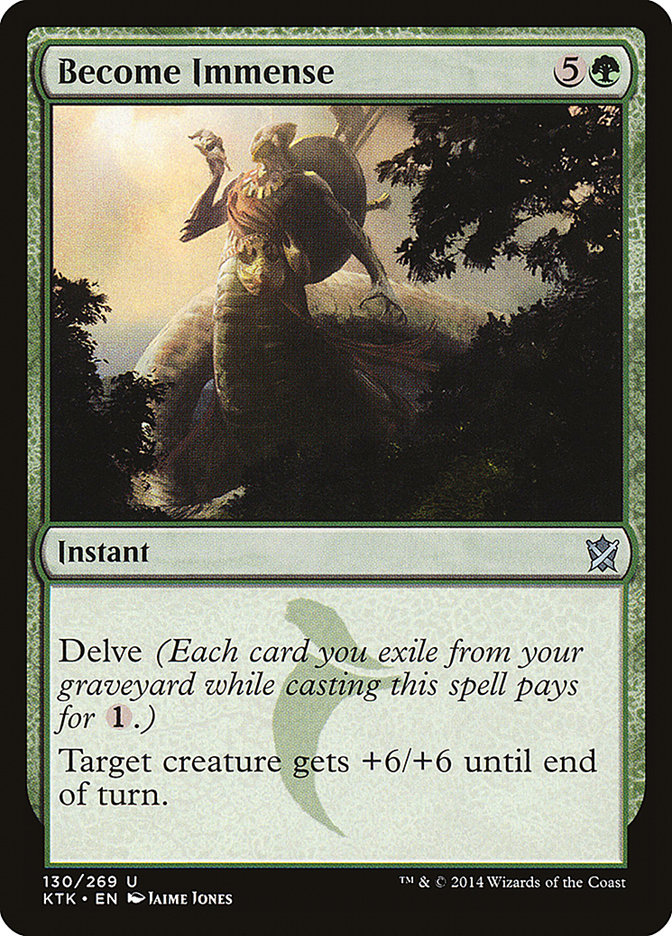 Infect is a deck that runs eight fetchlands, Brainstorm, Gitaxian Probe, and has no use for its graveyard. That said I don’t think any Khans of Tarkir
delve cards will make the cut. Become Immense is overkill, and the card drawing is worse than something like Sylvan Library or Tezzeret’s Gambit.

Become Immense doesn’t mathematically increase the speed of the deck. As Infect is designed now, you win most often with the one power of your creature
naturally, one from another thing like Pendelhaven, Noble Hierarch’s exalted trigger, or an earlier poke for one. After that, two pump spells for +4/+4
each finish the job. It’s extremely tough to make a +6/+6 work into any equation. It makes Berserk and the +4/+4 spells less efficient and only really
works if you can make a 2 + 2 + 6 situation occur. Noble Hierarch + Glistener Elf twice with Become Immense seems like the solution, but you have to have a
full graveyard as well to even make the dream scenario a reality. In Modern where Mutagenic Growth is around instead of Invigorate it becomes more
appealing but still not appealing enough.

Similarly I don’t like Treasure Cruise or Dig Through Time as additional late-game power in attrition matchups either. The best part of Infect’s spells are
how well they function at all stages of the game: multi-modal and both offensively and defensively. “Pitches to Force of Will” doesn’t come close to being
an argument for playing cards that are useless in the early game.

I’ve been winning with Infect, but as myself and JD Nir have only been sporadically top 8ing Open Series events, it was still seen as a fringe deck that
takes skilled pilots to make reasonable. Now that we’ve seen Todd Anderson, Brad Nelson, and Matthew Webter all make it to the elimination rounds of the
Legacy Open in Atlanta this past weekend, the world is seeing Infect as more of a legitimate threat. As the deck gets more exposure on camera and through
articles, the intricacies have gotten more understood and respected.

The cards that Infect doesn’t want to see are these:

While Infect can fight through some number of those cards, it can be overwhelmed and crumble at some point. I’m happy that people aren’t playing too many
of these cards in exceedingly high numbers but am willing to take up the challenge and adjust for the upcoming metagame shift if necessary. Note that cards
like Gitaxian Probe and Vendillion Clique might not come off as powerful against Infect, but hiding information is critical to how Infect operates. You
want to have your opponents playing scared at all times of what your deck is capable of, and the possibilities of them making mistakes decreases
drastically when everything is revealed.

If you’re looking for a decklist that targets Legacy Infect more specifically while still having game versus the rest of the field this is where I’d start:

As for Legacy Infect, I still feel like it’s the best deck and expect players to adjust slowly to its presence. For anyone that’s interested in picking it
up for the dual Open Series weekend in Indianapolis or New Jersey, go for it. People still don’t know how to play around it and don’t give it enough
credit, so punish them while you still can!

Overall, I’m looking forward to playing in my local real-life prereleases. I’ll be choosing Abzan but am interested in trying all the clans eventually. Try
to stick to three colors if possible, and when in doubt follow the direction that your mana-fixing leads you. You’re better off actually being able to cast
marginally weaker spells than not casting any at all. Most off all, play to your style and have fun because Khans of Tarkir is a blast to play!

Also be sure to use Tom Ross tokens for Sorin, Solemn Visitor when they come out! :D 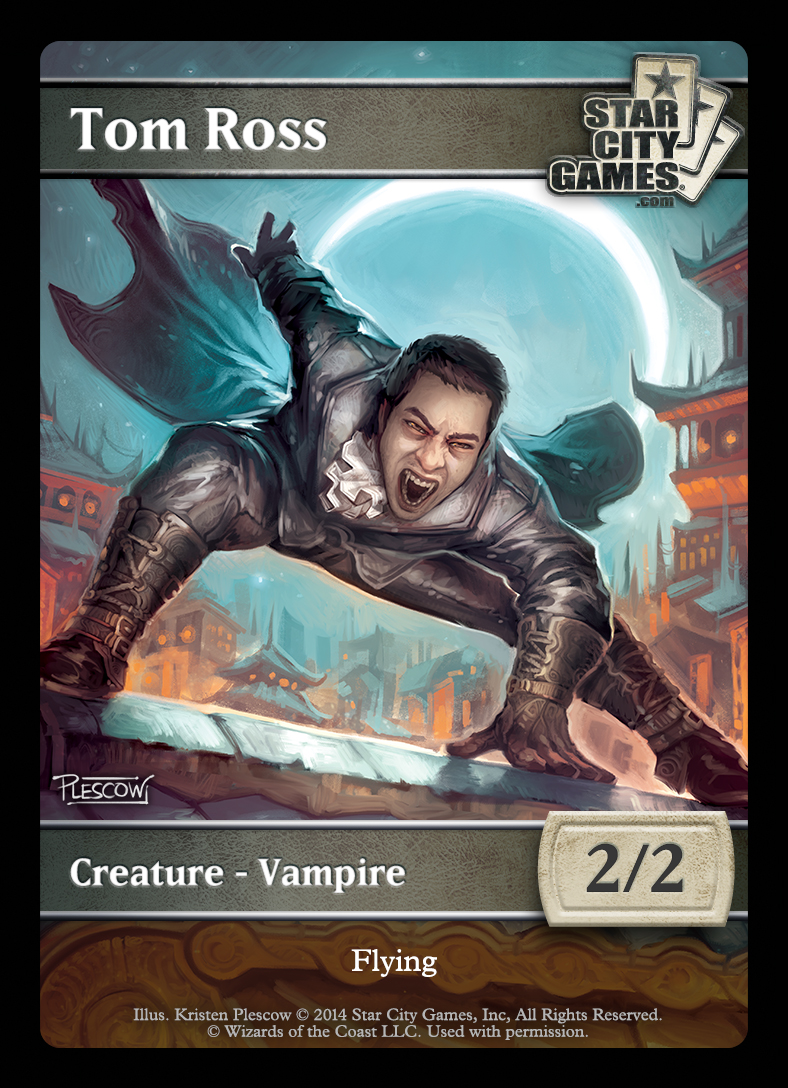