When it comes to drafting, I hate conventions. From what I hear here and there, going into a draft requires a good knowledge of which card to take over another. This you know by drafting a lot and comparing different draft reviews on the Internet. Those reviews often – or always – cover the same cards, be they commons, uncommons, or obvious bomb rares. In the end, you’ll end up with a deck you already drafted before, or at least something very similar. Most of the time, you end up closing yourself off from countless other combinations.

Every time I start a draft, I try to be creative. I search for wacky draft combos. The decks don’t always end up being good, but it feels like I’m taking a step further into playtesting new cards. I don’t enjoy drafting according to the conventions so much. It’s simply not fun. By doing this, I discover those hidden gems. That’s how “Drake” was born.

But that’s what practice drafts are for, right?

I remember a time when rares were always overrated. Even the least playable ones were always picked before the rest. I’m talking about a time, long before rarity color symbols appeared on the cards. Over the years, with the increasing popularity of Internet, players’ minds seemed to focus on what they read online. Now most are lacking creativity, a huge part of the game. Nowadays, you see those apparently unplayable rares going round the draft tables… while their actual power is just better than you think.

Such cards usually have specific or very situational effects. They don’t integrate into all decks, but if you manage to build a deck around them they sometimes become as powerful as the bombs everyone recognises.

I’m going to start revisiting the hidden gems of Ravnica and Guildpact, while we all wait for Dissension. I’ll review the cards that I think deserve a second look. Most of them are rares, but some will be underrated commons or uncommons. I’ll explain what you can do with them; when, and why, you should pick them; and when you should consider playing them. Some are obvious calls… but again, players’ minds are too focused on conventional draft strategy, so a new approach of the card reviewing may refresh their creativity.

As I have to start somewhere, I’ll review Ravnica rares that I feel are underrated. This means you’ll often see them very late in drafts, or sitting in the sideboards. This is not absolutely true for all of them, but I think most people will agree that they’re not the most popular picks.

I’m not saying you should first pick those cards. I’m saying that you should consider picking them over a “safe common pick” or higher, as they would be much more powerful if you know how to use them. 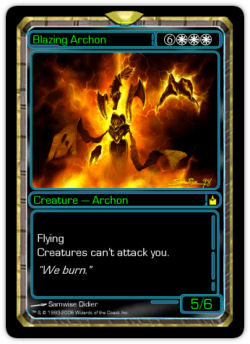 A 5/6 flyer for nine mana isn’t exactly a good deal… but it’s one of these cards that wins you the game when it hits the table. I don’t think I’m teaching anything to anyone here. The thing is, no one seems to believe in this guy. It sure is expensive, and you wouldn’t pick it or play it every time, but this is often a late pick and it deserves a second look.

To support this big boy, three Karoo lands in your deck and a couple of Signets are necessary. You can take full advantage of the Archon if you orientate your draft into a WBU control deck, with the usual card advantage tools (especially discard spell such as Strands of Night and Consult the Necrosages). Guildpact will hopefully provide you with Shrieking Grotesques.

Once in play, it will dominate the board, and if you took care of your opponent’s hand while waiting for your ninth mana to show up, this will be a game winner.

The control draft archetype usually misses a winning condition. This guy will do the job just fine.

Chorus of the Conclave

Just like Blazing Archon, Chorus of the Conclave has a huge cost. Unlike the Sisters of Stone Death (which are picked far too early), Chorus of the Conclave seems to be less popular. Just like the Archon, your mana will have to support it, with two or three Karoo lands and a few signets. Even though it only has three points of power, the eight toughness makes it very hard to deal with. With Black losing two ways to kill big creatures in Guildpact (Brainspoil and Disembowel), this threat is even harder to deal with. Pillory of the Sleepless doesn’t really take care of that guy; neither does Faith’s Fetters.

I would definitely pick that card over most commons, and draft enough mana fixers and accelerators to try to be able to cast it as soon as possible… as long as you have other creatures to play along with it. Thirteen other guys (at least) should be enough.

Blazing Archon and Chorus of the Conclave have one thing in common: they’re very expensive. The reason they deserved that second look is that you are now most likely to play three or four colors, and therefore you’ll be tempted to pick the Karoo lands higher. The Karoo lands do more than smooth your manabase; they also provide you with more mana. In general, you’ll never play less than sixteen lands, with fifteen and below being very dangerous. With that said, if you have three Karoo lands in your deck – along with two or three Signets – you’ll reach the eight or nine mana you need in the mid-late game almost every time. You often end up having much more mana than necessary, so playing one or two fat guys is usually a good way to take advantage of these extra resources. 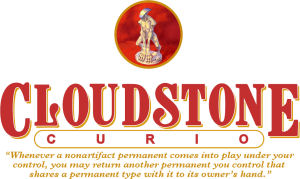 StarCityGames readers know how much I like this card. In “Drake drafts,” this card is a powerhouse. With Guildpact, I think this is just a huge card to open. It’s not difficult, when you open Cloudstone Curio, to build your deck around it. Not that you’ll have to force yourself into bad cards, as most of the cards you’ll want along with it are cards you would pick anyway. You can abuse Vedalken Dismisser to the point where your opponent will have almost no outs.

One of the best things about the Curio is that you can draft different strategies. For example, you can go for the Izzet Deck and catch the Steamcore Weirds, Ogre Savants, and Izzet Chronarchs – the latter usually arrives pretty late, for some reason, so you can expect to get at least one or two of them. Alternately, you can go for my favorite strategy: draft “Drakes,” and pick the Auras and Drake Familiars to abuse them, along with the Izzet arsenal mentioned above. Another route you can try is to abuse the Orzhov flyers: Blind Hunter and (to a lesser extent) Shrieking Grotesque.

If you start off with a Curio, or draft it early enough, make sure you get transmute cards to fetch it. Drift of Phantasm is a good card regardless, so no wonder you’ll try to pick it… but don’t forget about Perplex. I don’t think Perplex is that bad a card when you actually cast it… but more importantly, it transmutes into the Curio and many other important spells in your deck. Next time you draft, take a look at your three-mana cards. It’s most likely that you’ll find your key cards there.

Some of the cards I’m talking about here are huge in “Drake” drafts but from now on I’ll try not to talk about that format anymore, as everyone thinks I’m addicted to it!

In all seriousness, this card is extremely underrated. While I’m actually a huge fan of Ravnica’s Auras, not everyone feels the same. The question is: how many Auras are enough to support Copy Enchantment? My call would be three or more. Flight of Fancy, Fists of Ironwood, Strands of Undeath, Faith’s Fetters, Pillory of the Sleepless, Galvanic Arc are among the commons: you should be able to take advantage of the card. I’m not even talking about copying Pollenbright Wings or Wurmweaver Coil!

You should also keep in mind that you should sideboard it in if your deck doesn’t have enough enchantments to support it, but your opponent does have such cards. People tend to believe that it’s too often a dead card. Once you draft it over a playable common – not too late in the draft – you should be able to take full advantage of this card.

How exactly does “playing with the top of your library revealed” affect the game? Giving extra information about what you’re drawing isn’t a good thing, but knowing what you will draw is, in my opinion, more important.

This artifact is cheap, and you’ll be able to cast in early in the game. In that case, the information you get from the top of your library will help you much more than it will handicap you. In the situation when you don’t have a land drop for the next turn, knowing that you’ll draw a land or not the turn after is crucial in the way you’ll play the early game: which creature to drop, what will be your next play, etc. While your opponent will know about your next draw, he’s still missing the information you’re getting from it, which is your actual game plan.

In the late game, when your lands are laid on the board, it’s just a dominating card. You can dig your deck for the cards you want, and with luck you can dredge away the top card if you don’t want to pay WG.

The +1/+1 bonus is not actually so relevant. Of course, having your creatures pumped is a good, but meeting the conditions is not so likely to happen every turn. While you shouldn’t rely on it every turn, it will have you deal a few more damage, or unbalance an attack step in the late game.

The two mana you’ll spend when you cast it, and the card it costs you, will eventually be worth the investment. Think of it this way: when you send a useless card back to the bottom of your library, you “get a card.” Do it once or twice, and you have made a good deal.

That’s it for this instalment of Hidden Gems. This will be a weekly column, so be sure to return next time for another look at the unloved cards of Limited.