Casual Favorite
– “Will casual players want to build around this?”

Depending on the degree of each answer, I’ll either trade for the card or I aggressively buy it. I usually save money for stuff with serious potential. For a grinder, there are only two modes of buying. We are either buying cards at below market value with the intent of trading them or reselling them at market value (that doesn’t apply here), or we are aggressively buying up stock of a particular card that’s on its way up. Any other buying is considered personal buying, and typically, this hurts your bottom line. I’m guilty of personal buying because I’m also a player. I’m one of the worst offenders when it comes to impulse personal buying. “Foil Japanese Jace? Yes, please!” Ouch, you know that’s going to hurt my bottom line!

I’m not saying that personal buying is bad. This is a game that we all play for enjoyment, and it’s not always about the dollar bills. That being said, knowing the difference between personal buying and profitable buying will help you make smarter purchases. The awareness of this difference alone should help you in exercising patience when buying. Anyways, let’s get back to the Crusaders.

Are the Crusaders at an “aggressively buy” status? No. Is the price good? Yes. The price on these guys is pretty solid (we will talk about why in a minute). If you plan on playing with these cards, you should pick up a set. They’re pretty low right now, and they have more potential for upside than downside. You should note that I’m not advocating stockpiling these, simply getting a set now to avoid the possibility of paying more later. This is an example of personal buying, but at least it’s educated (or it will be once you’re done reading this article). Let’s talk about each card specifically.

This looks like a tournament card to me. It swings through Overgrown Battlements and hordes of Vampires. It doesn’t die to Doom Blade, and it has double strike. It also blocks Vengevine all day long. The downside is that it dies to Pyroclasm and Lightning Bolt, both of which are prominent in the Standard format. This card brings a strange brew to the table, and in the right format (maybe one where he can hold a Jitte and block a Tarmogoyf) it could really shine. 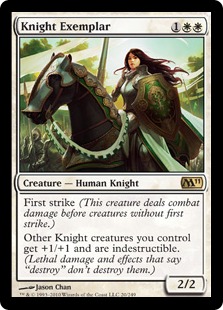 From a casual perspective, the key element here is that it’s a Knight. That’s right, boys and girls, Mirran Crusader plus Knight Exemplar equals hardcore casual combo! I’ve already played against a handful of Knight decks in the Extended practice room on Magic Online. This small development has prompted me to start picking up Knight Exemplar in trades.

From a Standard tournament perspective, this guy is pretty much unkillable. You need to bounce him with Jace or Into the Roil to get him off the board. Now, imagine him with a Sword of Body and Mind in hand – your opponent better pray for a Tumble Magnet. I built an Infect deck at the release of SOM with Adventuring Gear; the equipment was sick, but the deck seemed to be missing a strong creature curve. I needed a one-drop infector (besides Vector Asp), and I needed strong three-drops. This guy is a strong three-drop, and if I see a playable infect one-drop (or an infect burn spell), then I would switch the status on this card to “Aggressively Buy.” If the archetype gets one of those two things, then I think it can be a deck, and at that point, these will be in high demand.

The casual market is already driving the price on this card (it’s $.50 higher than Mirran). Infect is pretty big with the casual crowd, and this fits nicely with Hand of the Praetors. I was picking up Hand of the Praetors when Scars of Mirrodin dropped, but the demand at my local stores died down so I stopped picking them up. Since the Phyrexian Crusader was spoiled, I’ve started to pick these up again. If we do see a true one-drop infect creature, this may affect Hand of the Praetors’ price as well.

So, why go through all this jibber-jabber to basically say, “Don’t put money on the Crusaders; trade for them instead, and pick up Knight Exemplar and Hand of the Praetors?” Because I want to teach you how I evaluate cards, so that maybe someday, you can do it yourself. (Wow, that
was unintentionally condescending). I’m going to switch gears here and talk about the
Japanese Jace vs. Chandra Duel Decks.

The price on this is dropping fast; even the singles are not maintaining their prices. The original announcement said, “This new version of
Jace vs. Chandra
will be available in Japan and in limited quantities in the US …” The part about limited quantities scared a lot of people in the US, and upon the initial release, this was a hot item. That window has now closed. The deal with these products is that there are only a handful of people who want them. These types of people are willing to pay the big bucks, but once these people get their copies, the demand for the products dries up. It’s a limited quantity, limited demand product. This type of product always creates a hype spike, and the ones who sell first make the most money.

I’ve wanted a set of the foil Japanese Jaces out of this duel deck ever since the announcement came out. I started asking around, and no local stores knew if they were getting any. The panic started to set in, and I was prepared to snap up the first opportunity that came my way. My buddy offered me four for $110. It was a better price than I had been seeing, but it didn’t feel right. Earlier that day, I saw that the local store was carrying them at $40 each. I knew that if my store got them, then many other stores got them, and these foil planeswalkers would end up in trade binders everywhere before too long. You can get a set of these Jaces right now on eBay for $50 BIN; that’s a really low price compared to the initial price.

The opposite of this phenomenon would be the Jace Beleren book promo. These were only available through a book purchase at brick and mortar stores. These are in very short supply and in much higher demand because of the scarcity. You usually can’t find them for less than $50 each, and that’s the “low price.” It’s important to watch products like this before pulling the trigger and buying them. If you have a Jace vs. Chandra that you were hoping to make a quick buck on, my recommendation is to either keep it sealed and save it for a couple of years, or sell it now for what you can. If you’re looking to pick up the singles, give it another couple of weeks, and the prices should cool off even more.

Before I get out of here, I want to talk about the Gold queues on Magic Online. I don’t play a lot of Magic Online, so it took me a little while
to get up to speed on what was going on here. I had a good conversation with
@smi77y
from
www.60cards.com
about the topic, and it’s pretty interesting. In case you don’t know, the Gold queues are two-man queues that pay out five packs instead of one. Before the Gold queues, you could consistently sell your packs for 3.66 tickets each. Now the common price for selling your packs is 3 tickets each.

Why is this happening? It’s because of the rate that new packs are entering the system. Before, you had to play and win five two-man queues before winning five packs, but now you can get them in one two-man victory. This means that more people are selling more packs more frequently, probably faster than people are buying them. This is driving the price of packs down, which is making the EV on the Gold queues even lower. It’s ten tickets to enter, and you win fifteen tickets’ worth of product. This means if you lose twice, it would take four wins to just recoup your losses.

This probably has deeper ramification on the value of a ticket and the MTGO economy; if I see more trends, I’ll make you aware. Until then, what’s the moral of the story? Don’t play the Gold queues, and sell your packs before the price tanks harder.

That’s all for this week; have a very Merry Christmas, and I’ll see you next week where we can talk about what havoc was wrought after the banned and restricted announcement.