Here in Brazil the vast majority of people prefer English than Portuguese, I believe you see it as strange because you are an American and you probably don’t see the “enchantment” that the USA has on some people/countries. It’s like movies; it doesn’t matter if the film is very good if you gotta chose between American, European or a South American film, people will choose the American one. I’m talking about masses here but since pimping is a subjective especially the language aspect for me it is worth talking about “mass culture”. Another point to be considered is that translation in Brazil is poor and everything about Magic is generally written in English. I know WAY more cards by their English name than by their Portuguese name. English is Beautiful and “foreign”. [sic]
—Franklin Maia

As you can see from Franklin’s comments there is a pimp factor to English cards in Brazil. Part of the reason is because “America is Awesome,” and part of it is because the native language translation sucks. I don’t want to beat up on the people who do the foreign language translation at Wizards of the Coast, but it’s important to note that bad translation seems to be a common occurrence. There have been reports of the new Korean printings having translation issues. Eric Klug (who spent some time living in Korea) reports on the printing issues in this thread on MTGSalvation:

The blotchy printing looks to be confirmed. Also, native speaker writes, “Translation is so terrible it’s something like Chinese.”
—Eric Klug

These kinds of comments shed light on why English is the preferred language in other countries.

FBB dual lands were printed in German, French, and Italian. These are desirable because they are the only way to get black border dual lands (besides Alpha and Beta). Pricing data on FBB dual lands is sparse and hard to interpret. Let’s look at this eBay search for FBB Underground Sea. 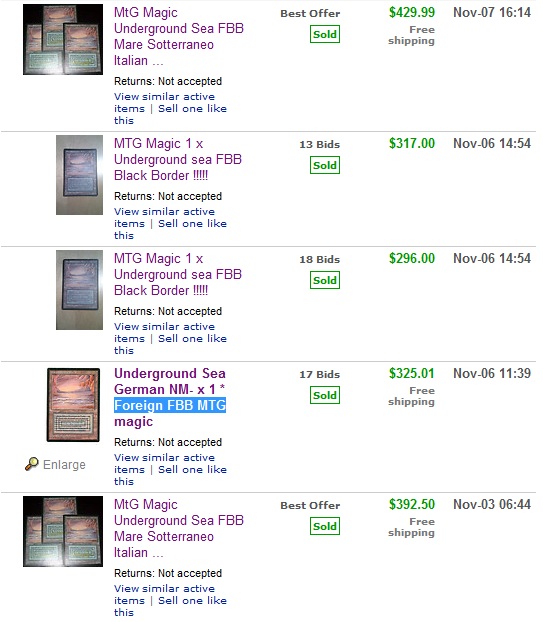 The two that are not labeled are Italian. What you’re looking at is all the FBB Underground Seas that have closed on eBay recently. The pricing is all over the board. You have one Italian FBB Underground Sea selling for $296 and another one selling for $429.99. It’s hard to say why the price has such a range; my guess is that someone sold themselves short by paying too much (both high auctions were “best offers”). This guess is just conjecture on my part. Let’s focus on what we can see from these auctions: 1) FBB Underground Seas are around $300; that’s about 35% of the average Beta price ($888 on eBay), and 2) there are not many FBB duals available on the market at the moment.

The “language hierarchy” for FBB dual lands is German > French > Italian. This is only important if you have a choice between two FBB dual lands that are in the same condition. Otherwise, the price difference between these languages can be very subjective. FBB dual land pricing is not a science; they typically fall between 3 and 4.5 times the value of their English (Revised) counterparts.

I hope this helps give a little more depth to the topic of languages. Now let’s get into the good stuff!

The Danger of Shiny Things

Some of my first foils were for my States deck. I was out of town on business and too addicted to the game to go out for drinks with the other business folk. Instead I scoured the internet for a game shop. I found one in a strip mall on the outskirts of the city. It was only a ten-minute drive from my hotel. I jumped in the car and booked it over to the “Dragon’s Den.” I walked in and thumbed through the random binders that they had at the counter. The cards were sorted by color, and the foils were mixed with the non-foils.

I was looking for stuff for my G/W brew that I built for States. It was early in my Magic career, and I thought that Stonewood Invocation plus Skyhunter Skirmisher was a sick strategy to crush States with (spoiler: I was wrong). I settled on a foil Brushland and a Foil Loxodon Warhammer; needless to say my MTG budget was meager back then. This was the beginning of the end for me. After those two foils, I couldn’t stop myself from buying more. Foils became a big part of Magic for me; it even got to the point where I had to swear off foiling my collection for a while. OK, I know that’s a bit weird, but it’s good for you, since I’m going to be your guide through the world of foils.

This hierarchy is mostly correct. Like everything, there are exceptions and corner cases, but before we get to those, I want to talk about the lowest level of foil pimp.

Wizards of the Coast has recognized the phenomenon of pimping, and they’ve created products that try to cultivate it. Products like the Premium Deck series and the Shards of Alara block all-foil packs are good examples of products that miss the mark for a pimp enthusiast. They may not be the target market for these products, but it does affect the price of the singles. Casual players may be buying these premium decks by the truckload, but once the product is opened, the singles don’t carry a premium. A good example of this is the Price of Progress from the Fire and Lightning Premium Deck; the foil version is the same as the regular version ($2.99), and the Korean version is five times more ($14.99) than the regular and foil versions. 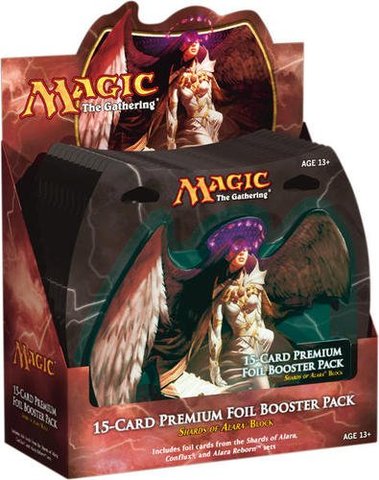 This is because the Fire and Lightning premium deck (and products like it) eliminate the key characteristics that make a card pimp. The things that make a card pimp are uniqueness and rarity, but you don’t get that from a mass produced box set. Also, the foiling process for these box sets is different (not a “good” different) than the normal foiling process. The difference is recognizable, and the singles are not regarded as pimp because of it. This may sound like a lot of useless snobbery on my part, but it should help you figure out the pricing for upcoming foil products or promos.

For example, Graveborn the premium reanimator deck is coming out. It contains at least two popular tournament playable cards that can’t be found in foil anywhere else. Will these cards go up in price? No, we know this because of the Price of Progress example that we talked about. 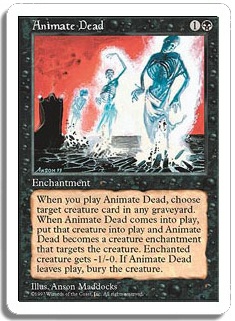 If Wizards of the Coast ever comes out with another all foil pack product, should we believe the hype? No, the Shards block all-foil packs were a failure, and the packs that were opened only served to drive the price of the foils down. For example, Qasali Pridemage was a $6 foil before those packs; now it’s $3.49. If you compare that with something like Nature’s Claim, you can see the difference. Nature’s Claim is from a newer set, and it’s still higher than Qasali Pridemage ($3.99).

FNM foils are given out at Friday Night Magic; this means that the distribution is not as high as the Premium Deck series, but it’s higher than the Judge foil distribution. Typically FNM foils are not worth a lot of money, but there are some exceptions, particularly cards where the set foil is really expensive or non-existent. The first FNM promos used the “old” frames (pre-8th edition). These are more desirable because they represent that a card is “older” or rarer, and in Eternal formats the old frames match better with the other cards of that era. Here’s a list of the most expensive FNM cards starting with the old framed ones. 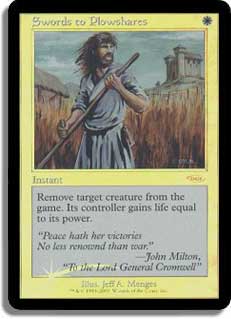 You might notice that the cards on this list fall into three categories: 1) Eternal Format Staple, 2) Commander Staples, and 3) Cube Staples. The cards that fall into more than one of these categories are typically more expensive. The other thing to note is that many of the old frame promos are the only foil versions available. This raises the demand on these cards through the roof.

Judge foils are the next best thing to the set foil, and in some cases they are the only foil version. These foils are also in heavy demand from the three categories listed above. That means that it should be easy to spot Judge foils that will rise in value. Judge foils always follow the same pricing pattern. Upon release they’re very high; then they slump and bottom out and finally climb back to the price that they settle into. A good example of this is the Demonic Tutor, which started at $100 and at one point fell to $30; it’s now on the list of the most expensive Judge foils at $100.

Did you notice the last card on the list? Survival of the Fittest is not legal in Legacy; it’s not played in Vintage, but it’s one of the most expensive Judge foils. Why? The fact that Survival shows up on this list shows how much power the Commander / Cube population has in the pimp market. This makes me wonder why the Judge foils below aren’t valued higher.

This card is legal in Commander; it’s in most Cubes; and it’s played in Vintage. The non-foil version is listed at $9.99. There are no other foil versions of this card. There’s no way that this card will stay at $20. Maybe that’s why it’s sold out. 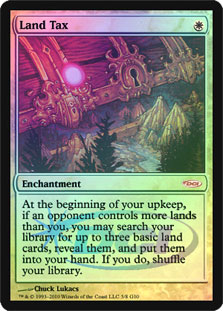 There are many people who believe that this is the next card to be unbanned in Legacy. If this is unbanned in Legacy, then these Judge foils will definitely shoot up in price, but even if it doesn’t, it still falls into the sweet spot of being a Commander / Vintage playable, which doesn’t have any other foil versions. 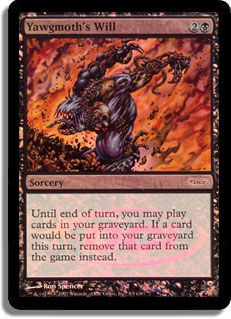 This has the same benefits as the cards above. It’s in cubes, Commander, and Vintage decks. This card has already begun its rise, and I expect the trend to continue.

Foils were introduced in Urza’s Legacy and have been printed ever since. Early set foils are rarer and typically see more play in non-rotating formats, so they carry a higher premium than new set foils. A good example of this is Daze from Nemesis; the foil version is $59.99. This doesn’t mean that new foils don’t carry a premium; for example, do you know how much a foil Forbidden Alchemy sells for? I’ll save you the time of checking; it’s listed at $10. This has been the case since about two weeks after the set release. The foil market is unpredictable and volatile, but there are some rules that can help you keep your head above water.

Keep these rules in mind when dealing with foils. The best thing to do if you’re in doubt is to check the price and do some research.

There’s a lot more to say on the topic of foils; next week I will to talk about foreign foils and a handful of special foils. I will also be tackling misprints, miscuts, and other printing deformities. Thanks for reading and for sounding off in the comments.

See you next week.