Fatal Push is always going to be good, and I expect it’ll end up like Path to Exile: bouncing between $5 and $15, depending on how recently it was reprinted. I’m certainly not grabbing these until after the FNM promo release in September, but there might be a nice buy-low window around the holidays.

Walking Ballista is a good long-term hold, but its price is being held up by the fact that it’s one of the five or six most-played creatures in Standard right now. I’ll sit this one out until rotation. Spire of Industry and Baral, Chief of Compliance are better targets—they see enough Modern play to intrigue me, and Standard play doesn’t seem to be affecting their current prices all that much.

Blooming Marsh is priced like a Standard-only land, but it actually sees a ton of Modern play right now. In fact, all of these Kaladesh lands are going to be relevant in Modern for years. If you can pick these up in trade for other Standard staples, I highly recommend it.

It’s probably worth grabbing a set of Ceremonious Rejection, too—it’s the sort of cheap and unique effect that ends up at $2 eventually. Torrential Gearhulk’s price is still tied too closely to Standard, though, and Padeem is generally just a one-of in Lantern Control—I’m leaving them alone for now.

Now we’re reaching the sets that are rotating in September, which should make for some good buying opportunities. Collective Brutality is one of the most important cards in Modern right now, and you should think about buying in if it drops below $10 when people sell their Mono-Black Zombies staples over the next month or two. Liliana, the Last Hope is another interesting target—I’m not sold at current retail, but if she ends up at $12-$15, it’ll be hard for me to stay away. Ditto for Blessed Alliance, which will probably spike to $5 at some point over the next year or two.

There isn’t much here for us, sadly. I might grab sets of Tireless Tracker and Traverse the Ulvenwald at rotation, but I’m not interested in paying more than about $1.50 each. I like Westvale Abbey a bit more, but only because of the Commander angle. In the end, Shadows over Innistrad was a fairly disappointing set for Modern play.

Oath of the Gatewatch

Jackpot! Granted, most of these cards are good in all the different flavors of Eldrazi decks, but I think we’ve proven that there are multiple different angles of attack that Thought-Knot Seer decks can successfully take. I’d be shocked if these cards aren’t a major part of Modern for years to come.

Thought-Knot Seer and Reality Smasher are the two best targets here, seeing play in pretty much every Eldrazi variant there is. I suspect that both cards will at least double in price before their inevitable reprint in Modern Masters 2020 or whatever. Eldrazi Displacer is a fantastic under-the-radar buy, though—not only is it solid in a couple of different Modern builds, it’s brilliant in Commander. Sea Gate Wreckage won’t be a bulk rare forever, either—I’m going to sock away a couple of sets over the next few weeks.

There isn’t as much to love in Battle for Zendikar, but Ulamog, the Ceaseless Hunger will look decent if it drops below $10 at rotation. Casual interest helps a lot here. I’ll be looking to pick up Shambling Vent once it hits $2 as well. Sylvan Scrying won’t be a $5 uncommon again, but it could hit $3 if it isn’t reprinted again anytime soon.

We’re back into sets that rotated a while ago, so there aren’t as many obvious buys. I do like Harbinger of the Tides, though—Ixalan might bring us some new Merfolk, and it wouldn’t take much for this one to end up in the $3-$4 range. Ghirapur Aether Grid is also the sort of card that seems like it’ll be $1 eventually, too.

We’ve known that Collected Company and Kolaghan’s Command are good in Modern for a long time now, and this $15-$20 window is where I suspect cards like Collective Brutality and Thought-Knot Seer are heading after rotation. Secure the Wastes is usually just a one-of in Jeskai Control, but it’s got a little bit of casual upside as well.

Much like Hangarback Walker, Tasigur, the Golden Fang’s price has been held back a bit by the Standard Event Deck that included both cards and was readily available at or below MSRP. Those are pretty much gone now, though, and Tasigur has started to creep up in price a little. It’s going to be a slow gainer, but I really like its long-term outlook.

Gurmag Angler and Temur Battle Rage are good enough cards that they’ll end up breaking $1 at some point. It’s not crazy money, but the buy-in is still incredibly low, since they’re just commons. Ugin, the Spirit Dragon is fairly priced, and I’m not in love with where the Tron decks are in the current metagame, so I’m staying away.

The fetchlands are going to be good no matter what—that’s why they’ve roughly doubled in price since their pre-rotational lows. I don’t think they’ll keep shooting up in price, but fluctuations between $15 and $25 seems reasonable to me.

I’m much more interested in Stubborn Denial, which unceremoniously jumped from $0.25 to $2 a few months after Amonkhet came out. This feels like a sustainable leap for a card that’s difficult to reprint, and I wouldn’t be surprised if it ends up rising toward $3-$4 at some point over the following year. 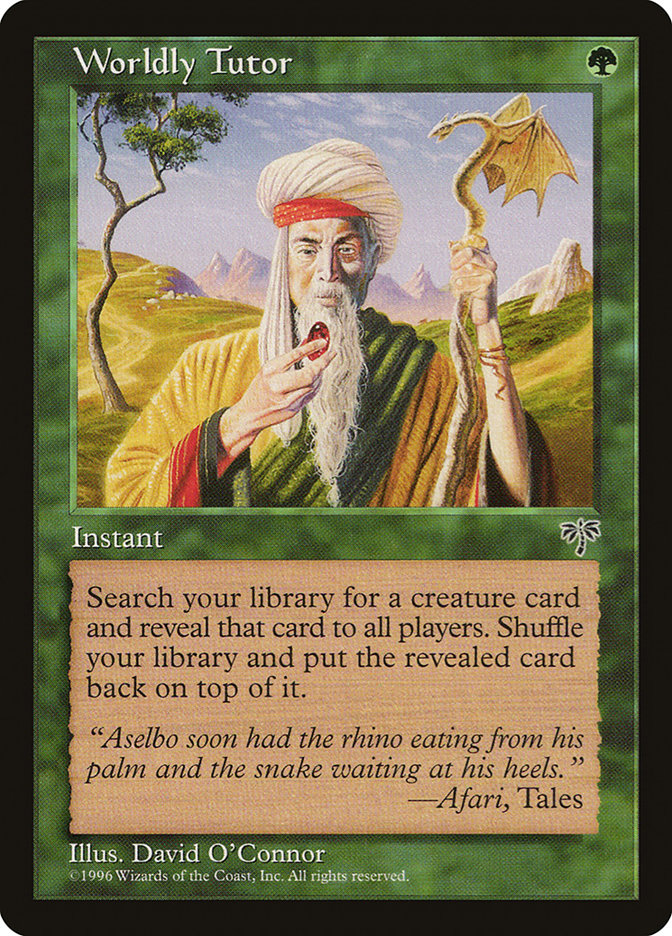 So, what have we learned today? Here are my thoughts:

First, even recent sets have a certain number of obvious and reasonably expensive Modern staples—cards like Collected Company, Kolaghan’s Command, the fetchlands, Collective Brutality, and Thought-Knot Seer. These cards don’t drop off very much, even at rotation, but they’ve all spent at least some time below $10—usually earlier on in their Standard run. The moral of the story? Don’t wait around for the spike to leave you behind.

They don’t have the same upside as mythics or rares, but uncommons that end up in multiple good Modern decks can end up in the $2-$3 range a few sets down a line. Most people tend to ignore these cards a little bit longer than they should, which means that there’s money to be made here if you’re willing to go deep enough.

Last, there are plenty of recent cards in the sub-$5 range that see a decent amount of Modern play. As the metagame evolves, some of these cards will make significant gains. Since most of the folks at your local game store still value these as Standard cards, not Modern ones, you can trade for them without having to pay a premium. Don’t expect every card to pay off, but the ones that do should be enough to make the whole endeavor worth your time.

In Standard, Hazoret the Fervent seems to have plateaued at $20 after a fantastic Pro Tour. I suspect it’ll start dropping off again soon, though the fall will probably be fairly slow based on what I’ve seen. 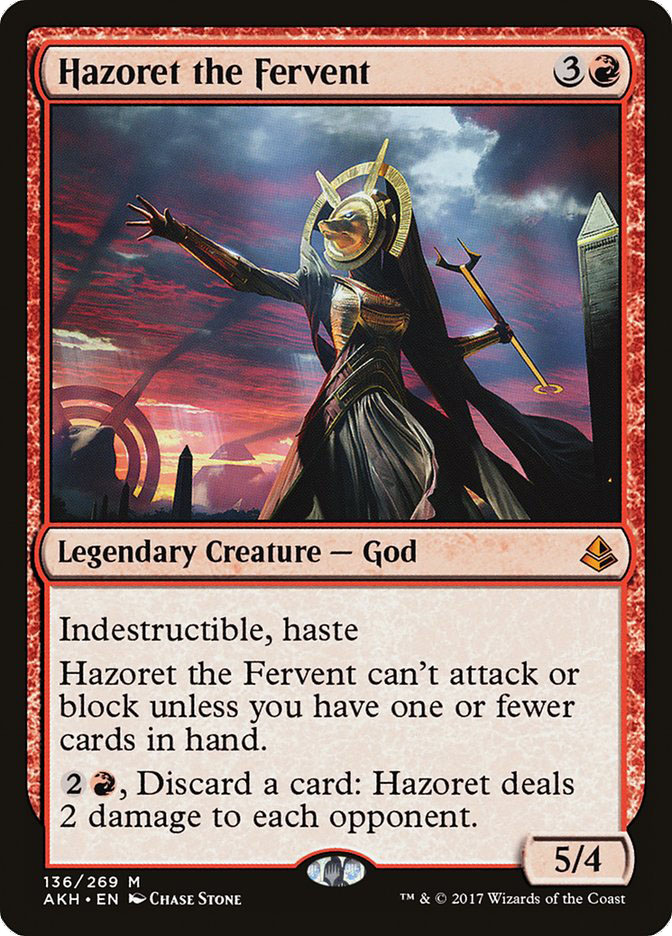 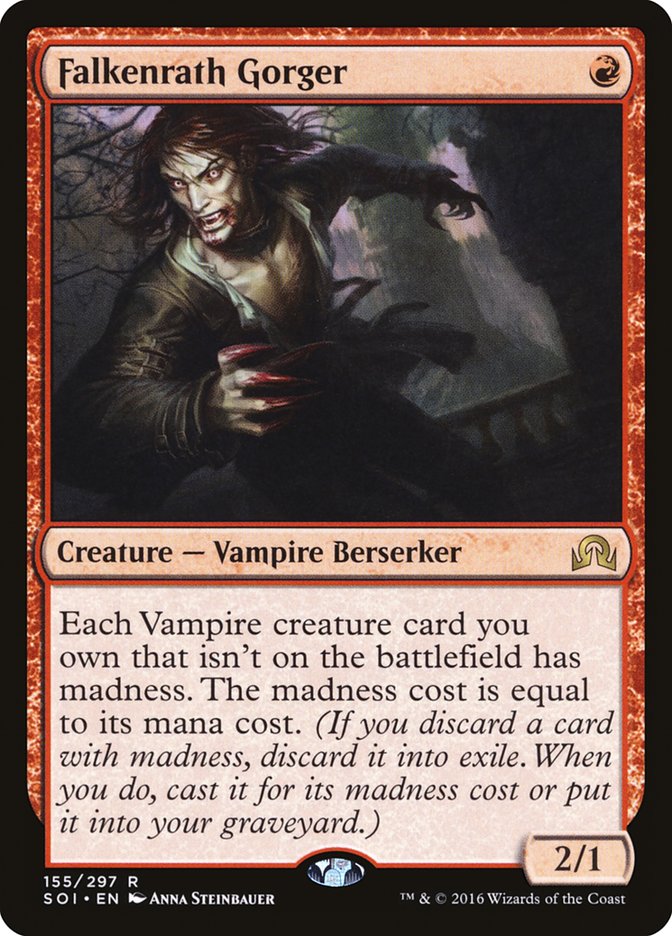 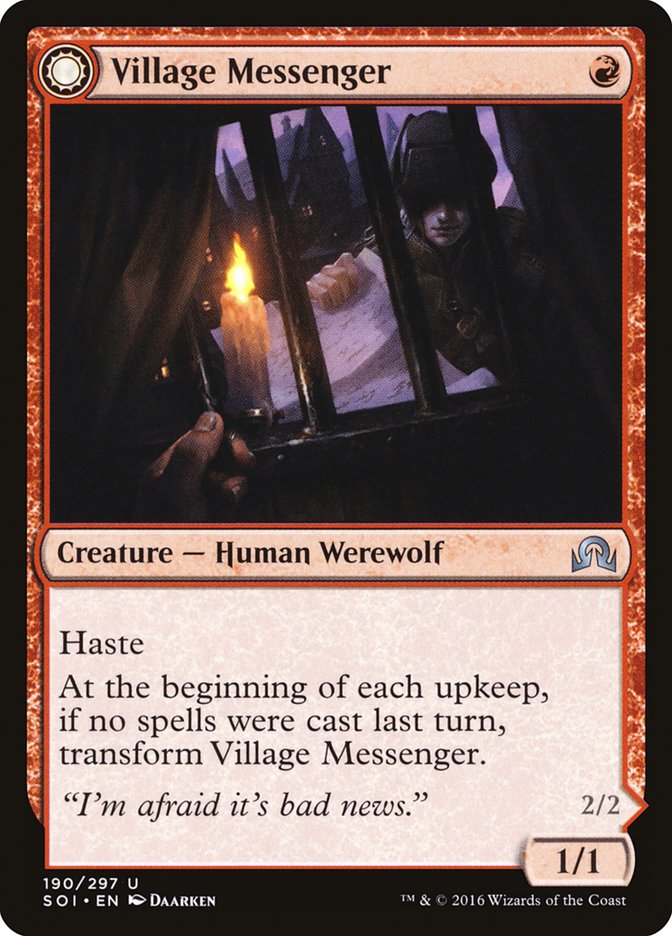 As for the other cards in Ramunap Red, Falkenrath Gorger and Village Messenger peaked early last week and began to drop as speculator copies flooded the market. Soul-Scar Mage, Earthshaker Khenra, and Bomat Courier have proven more resilient, though, and I haven’t seen much of a drop-off for them yet. People still want to play Ramunap Red, though, as for any Pro Tour-winning deck, I suspect that this is still the very top of the market for all of these cards.

The biggest fallers in Standard? Grixis Control and God-Pharaoh’s Gift staples like Angel of Invention; Nicol Bolas, God-Pharaoh; Champion of Wits; and Hour of Devastation. Heart of Kiran is dropping too, a result of Mardu Vehicles losing share in the metagame. Ramunap Red and Mono-Black Zombies are the top of the heap—at least for now—and everything else has taken a hit. 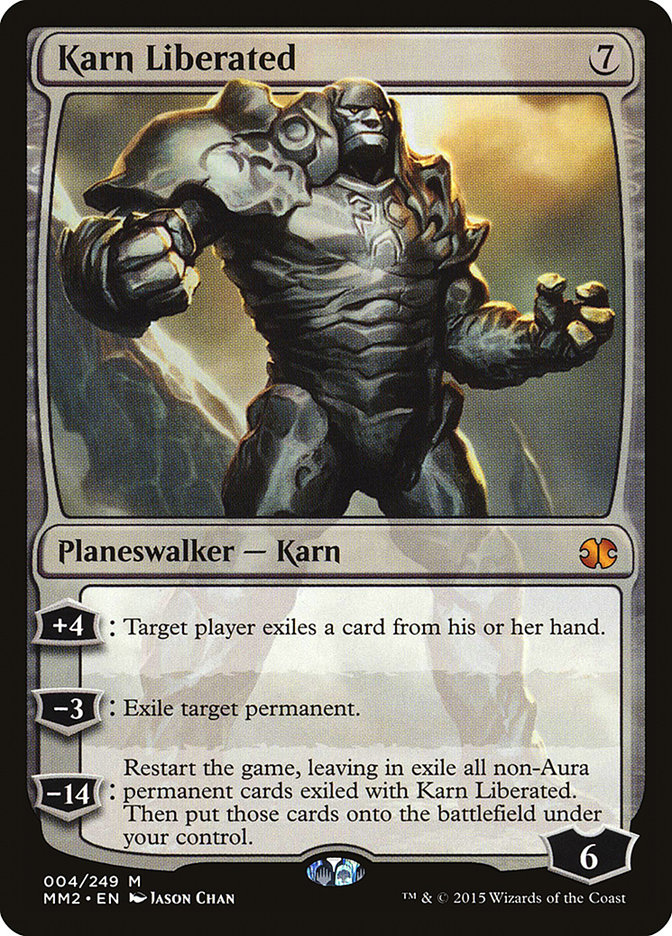 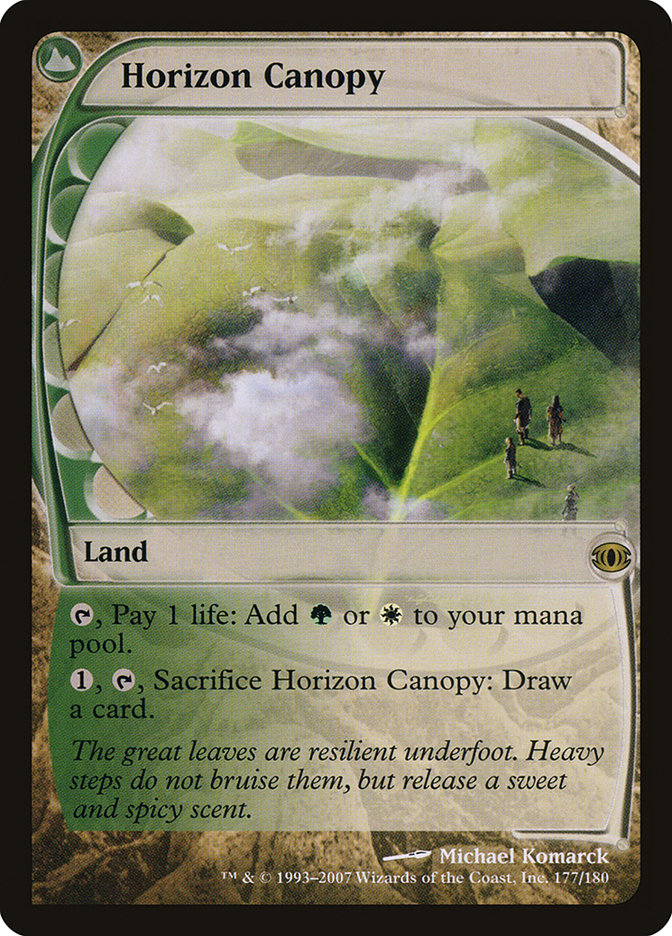 With all of the attention on the Pro Tour, Modern had a quiet week. Karn Liberated and Horizon Canopy gained a couple of bucks. Consecrated Sphinx lost a few, probably because it’s an obvious inclusion in Iconic Masters. I bet this weekend’s Modern Open will shake things up a bit.

Now that we know the tribes in Commander 2017 will be Wizards, Dragons, Cats, and Vampires, some casual prices are starting to move in anticipation of release day. Some generally good tribal cards like Shared Animosity and Door of Destinies saw small increases, and foil copies of tribal cards like Voidmage Prodigy and Vampiric Dragon are on the move. 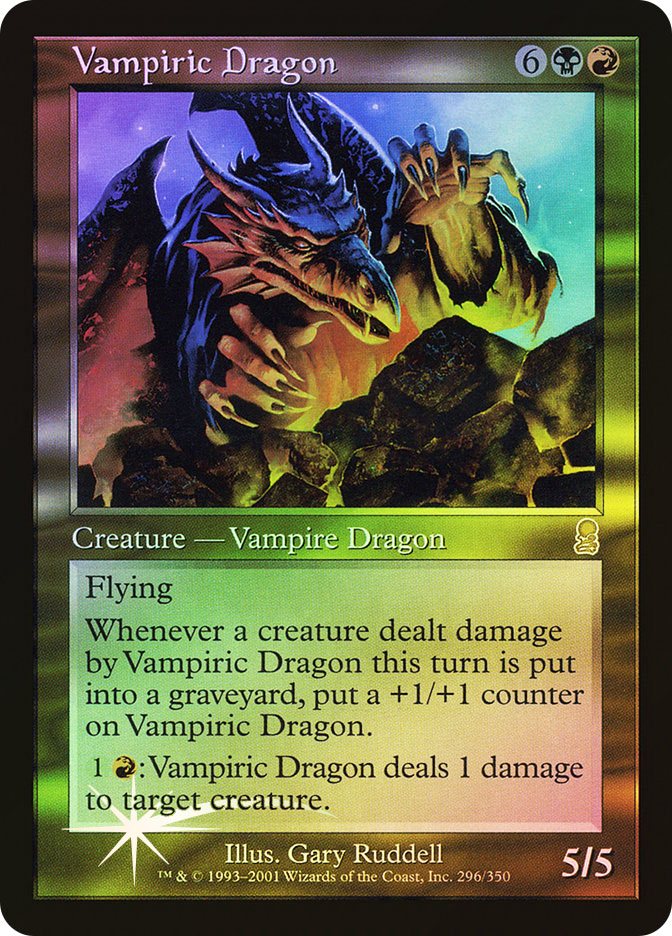 While I don’t love speculating on cards that might actually be reprinted in these decks, grabbing foils is fine here. I wouldn’t go too deep—foils are notoriously hard to move—but if you’re planning to foil out your own Vampire deck, now’s your last chance for a while.

Lastly, we now have a name for Magic Digital Next: it’s called Magic: The Gathering Arena. We’ll know a lot more when some of the gameplay is revealed on September 7th, but based on the name, the logo, and everything that Wizards of the Coast has said so far, I have a feeling that it’s more of a Magic Duels replacement than a real alternative to Magic Online. Here’s hoping it’s a fun, easy-to-use client that Wizards of the Coast can use to grow the player base. The last time that happened, the market soared.