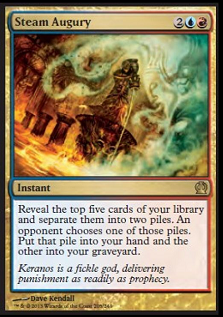 How do things change when the roles on Fact or Fiction are reversed? For starters, Steam Augury is likely going to net you fewer cards in the long run, assuming most five-card piles that come off the top of your deck are equal. However, the one- or two-card pile likely contains what you need, or at least what you think your opponent thinks you need, so maybe that’s not the case.

One of the most famous Fact of Fiction tricks was casting it in response to some gigantic spell, possibly with some Hollywooding to really sell it, flipping over a Counterspell and four other cards, which they would immediately split into 4/1 piles. At that point, you could scoop up the juicy four-card pile, cast the Counterspell you had in your hand already, and win the game.

With Steam Augury, I predict many of the same types of situations. If you’re facing down a horde of lethal creatures, cast Steam Augury at the end of their turn, and reveal Supreme Verdict and four other reasonable cards but nothing that would save you by itself, how do you split it?

Supreme Verdict versus the rest should sell them on you not having the Supreme Verdict, and you could expect to receive the four-card pile.

The catch is that your opponent doesn’t know what you want, especially on turn 4. As Glenn Jones pointed out, casting Steam Augury on turn 4 (or turn 3 with a Goblin Electromancer, ding!) can create some interesting situations if you split the piles three spells versus two lands. If they need the lands, you’re probably better off giving them the spells. However, it could be an elaborate and very risky bluff. Perhaps they are flooded and truly need all three spells in order to get back into the game. If they split it two spells versus one spell and two lands, they’d almost certainly be handed the bigger pile and then lose.

With Fact or Fiction, you always got the card you wanted, but that’s not the case with Steam Augury. However, that’s all reliant on your opponent knowing exactly what you need. Of course, there are still the situations where you’re both in topdeck mode, you peel Steam Augury, and you cast it revealing one business spell and four more lands. You’re getting effectively nothing out of that deal, but those situations should be few and far between.

If nothing else, I really appreciate that Steam Augury requires the caster to know how to best utilize their own cards. At the very least, it’ll be easier to resolve than Gifts Ungiven, no matter who chooses which pile.

As always, it’s difficult to build a control deck in the beginning of a format. I have a vague idea of what’s out there, but is that really enough? If it’s not, you better show up with something proactive. At least if they’re doing weird stuff you’re not prepared for, you’ll be pressuring them with Assemble the Legions and Elspeths.

For the general idea, I know I want some counterspells, but I don’t know which ones will be best. I want some card drawing to smooth my draws and to be able to chain them together in the late game in order to bury my opponent. I want cheap removal and some life gain to stave off aggro rushes. I want some powerful permanents so I don’t have to answer every single threat my opponent plays.

Considering that control almost always has to play a tapout game early in a format, there are few times when you can load up on countermagic. Despite lining up well against the average casting cost in the format, we probably can’t play many counterspells. Although with Essence Scatter, Syncopate, Dissolve, Counterflux, Negate, and maybe even Swan Song, perhaps I could make some Draw-Go happen.

As for the specifics, I’m playing Boros Reckoner as a way to pressure planeswalkers and hold off multiple smaller creatures by only using one card. If removal is huge, it might not be worth playing maindeck, but it’s always a good sideboard option.

Chained to the Rocks seems fantastic to me. Game 1, very few decks will be able to remove either it or your Mountain, so you should be safe. Post-board, Peak Eruption comes in from any remotely aggressive red deck, so you probably have to side them out. If their deck is spell-heavy or slower, it’s possible that you could counter their Peak Eruptions with Negate or Dissolve, but I probably wouldn’t take that risk.

None of that is the end of the world, though, as not every deck is playing red and certainly not every deck wants Peak Eruption. It’s actually kind of sick that WotC gives us Chained to the Rocks, a very reasonable and fair removal spell, but also puts the perfect hoser into the same set. At least give us three months to play with our new card before you start punishing us!

My next brew is a slimmer Steam Augury deck:

I like this deck, but I’m not sure how good it’ll be. For the most part, aggro-control decks (I wouldn’t exactly categorize this as a tempo deck) can get under midrange decks with something like Delver of Secrets and Young Pyromancer and control the game with counterspells and removal until they’re too far ahead to catch up. At the moment, it appears that Theros Standard is going to be a little on the slow side, so this type of deck might be able to shine.

In a deck like this, Steam Augury is a weapon of velocity and nothing more. Oftentimes, you won’t care what two or three cards you’re picking up off of it as long as you get to keep churning through your deck in order to find what you need.

For a finisher, I’ve kept the Blast of Genius and Catch // Release package from Dragon’s Maze Standard. Ultimately, that might prove to be less effective than some cheaper spells. However, for week one of a new format, I like having some powerful options in my deck, and both of those cards are certainly powerful.

While there is no longer Blasphemous Act or Harvest Pyre to combo with Boros Reckoner, you should remember that the combo of Boros Charm + Azorius Charm + Boros Reckoner is still available. Without a good Nephalia Drownyard, it will be difficult for most opponents to kill you once you’re at an arbitrarily high number of life.

Am I trying to make fetch happen? Perhaps, but I legitimately think Steam Augury is good even with its "drawbacks." I will continue brewing with Steam Augury and report my findings. In any case, if I were a betting man, I’d wager that Chapin will be coming at you soon with a Grixis list.

This is not the most tuned of lists, but it’s a start. I really like what G/R is capable of with its stack of mythic rares, and I particularly like the fact that Burning-Tree Emissary is a mana fixer that other aggressive decks don’t have the luxury of running.

Do I want Boon Satyr here? It’s hard to say, especially since I’m not even playing the full amount of Ghor-Clan Rampagers. The pump effect of both cards is certainly good, and the deck could use another three-drop or two. Ultimately, I decided to shave on some stuff in order to fit more stuff, but I should probably try the Satyr.

Spot removal doesn’t seem like something this deck is particularly interested in. There are probably very few things worth killing when you’ve got the best monsters and the best planeswalkers on your side. Unless something drastic changes, I’m content with leaving the spot removal in the sideboard.

By the way, I would make the best-looking Satyr token.

Could this actually be good? With few permanents dealing you damage through your Fogs, it’s very possible that Turbo Fog could race nearly any deck out there.

Obviously there are downsides. Purphoros is (rightfully) being heralded as the best card in the entire set, and that doesn’t bode well for Turbo Fog. My current answer is drawing Detention Sphere or casting Archaeomancer targeting Riot Control, but that probably isn’t enough.

Half the success of the archetype will likely come from having a good sideboard, which I currently don’t have. The Centaur Healers are particularly bothersome, as I couldn’t think of a better anti-aggro card. All I know is that Centaur Healer is not the man for the job.

This deck might be awesome, but there’s a more likely chance that it’s hot garbage.

Still, turn 3 kills are nothing to scoff at, and if players use the above logic similar to my own, there might not be a ton of removal floating around out there. That’s unlikely but still a possibility.

Last but certainly not least, we have my pick for potentially the best deck in the format:

I hope you’ve got your lucky coin ready!

Akroan Crusader could potentially make an appearance alongside Weapon Surge and Dynacharge, if you’re into that sort of thing. More one-drops, Madcap Skills, and fewer Young Pyromancers is another option.

However you decide to build it, Mono-Red Aggro is poised to dominate an early metagame consisting of Gods, planeswalkers, and weapons. Firefist Strike does not care about your Boros Reckoners, Kalonian Hydras, and Stormbreath Dragons. Forge[/author]“]Purphoros, God of the [author name="Forge"]Forge[/author] could end up being the best Hellrider type card we’ve ever seen. Foundry Street Denizen will etch its name in the Magic history books as one of the best one-drops ever printed.

Well, probably not that last one, but it’s still passable.

Despite this set looking and feeling very strange from the get-go, it seems like Theros is shaping up to be a fantastic set, especially when complemented by Return to Ravnica block. If you have any brews you want to share, I’d be more than willing to take a look in the comments section.