Now that I’ve played the format enough I’ve come to the following conclusion: Do not play more than sixteen lands. It doesn’t really matter if I’m aggressive or not, the best version of most decks in this format don’t play more than sixteen lands. Obviously this is a heuristic, and you might get a bunch of rares and play five colors and eighteen lands, but in general, the decks that go for the long game either have a ton of cycling spells or a ton of ramp. So I really want to reduce the probability of flooding. In fact, in the best versions of the aggressive decks, I want to play fifteen lands! I have even played a couple decks with fourteen (literally had like three spells with converted mana cost greater than two), but I’m pretty sure that’s an anomaly.

Lucky for you, this draft may be shaping up to be one of these fifteen-land aggro decks. Here’s how we’re starting it off:

The picks so far: 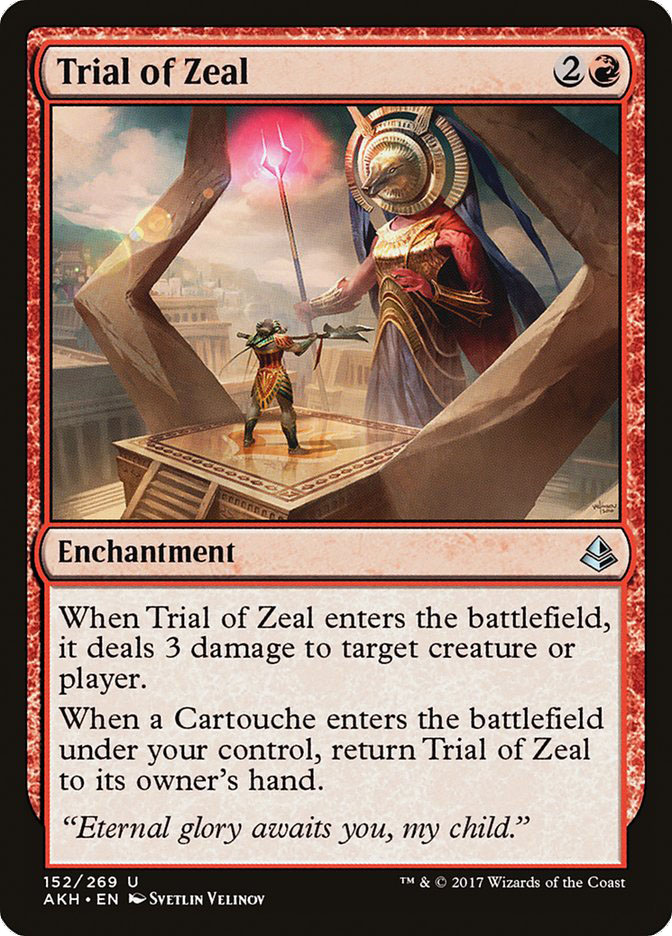 I am absolutely ecstatic to start off my draft with Trial of Zeal. This card is absolutely absurd and you should take it over most rares and mythics, in my opinion. The Cartouches are high picks, and if you ever return Trial of Zeal to your hand, it feels beyond dirty. But even if you don’t, three mana for a Lightning Bolt is very good in this format. Red decks really want to have a density of reach, so it’s more common than you would expect to cast Trial of Zeal to burn face!

The best card in this pack is Crocodile of the Crossing. That card is extremely good and efficient, which is the name of the game in Amonkhet Limited. But both Battlefield Scavenger and Magma Spray fall into that category as well.

First off, if I’m taking a red card, it’s going to be Magma Spray. As much as I like Battlefield Scavenger, I can get a good chunk of two-drops pretty easily (you do still need to prioritize them highly though). Magma Spray is about as efficient as it gets. It handles a bunch of premium threats, such as Gust Walker, for only one mana! This lets you attack and kill a creature in the same turn, which is such a huge tempo swing.

The nice thing about Limited and getting in the open lane is that you really only need it to be one of your colors. So the name of the game is to take red cards until we get a signal that another color is open. Then we move in!

These aggressive red decks can be absolutely bonkers in Amonkhet Limited. The key card I am looking to pick up at the moment is Cartouche of Zeal. That card enables turn 4 kills and also goes quite well with the Trial of Zeal that we already have. Let’s put it this way: Last week I took a Cartouche of Zeal over a Cast Out, and I absolutely stand by that decision. Unfortunately, the next pack doesn’t have such a sweet card to offer, so this decision is a little less clear.

The first thing I can say is that I’m not taking Manticore of the Gauntlet. Don’t get me wrong, I like the card in my aggressive decks. But I like it as a one-of and as my only five-drop. If I don’t have a copy, it’s not the end of the world; and five-drops are very replaceable. So if I’m taking a red card, it’s Brute Strength, a card I’m actually happy to have in multiples in my hyper aggressive decks.

Censor is an interesting option. U/R spells is a very hit-or-miss deck. It either comes together and is extremely powerful, or there aren’t Enigma Drakes opened at the table and the entire draft is a mess. I have actually had consistent success with a U/R-based aggro deck that essentially is mono-red that splashed blue for some cheap interaction. But as I said, this deck is usually close to mono-red, so missing a Censor isn’t that big of a deal.

So does Devoted Crop-Mate dethrone Brute Strength? Yes, yes it does! As I mentioned before, we are looking for a signal, and while Devoted Crop-Mate Pick 4 isn’t that large of a signal, the fact that two commons are missing leads me to believe that white may be open.

Now, three-drops are somewhat replaceable, but this one enables something that most cards do not: chump attacking. It’s quite annoying when a larger creature holds back your team. Well, when you can get back the creature killed the next turn, you can accumulate more damage!

Although I will want a Brute Strength in my deck, I should be able to get a similar effect at some point in the draft. So I’m going to take the more unique–and powerful–card here: Devoted Crop-Mate.

Also, I want to give an honorable mention to Honed Khopesh. While the card isn’t great, it’s definitely better than it looks. These super low-to-the-ground aggressive decks lose a lot of staying power in the lategame due to the size of their creatures, and having Honed Khopesh helps mitigate the downside of the archetype.