That’s all I’ve been playing at any tournament lately, and I’ve always finished X-2 or better. The ramp version I played in Washington DC is still a blast
to play, and I still highly recommend it. That said, during my last article I talked about trying to combine both
Gerard’s more controlling version and mine together, assuming that the perfect balance would be somewhere in between. Well, I’ve tried combining the two
decks, splashing white for Siege Rhino and Resolute Archangel, and even tried to be more of a ramp deck with Verdant Havens, but I’ve come to the
conclusion that you can’t add another color without playing Verdant Havens and/or a heavy number of Mana Confluences. 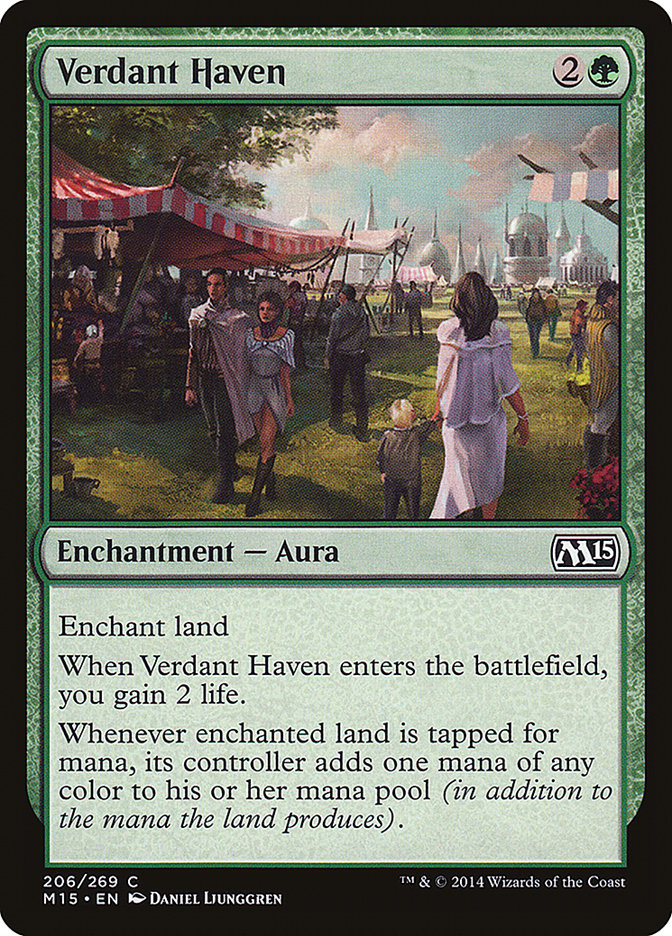 Verdant Haven was better than expected, but it really slants your manabase in a poor direction, and you lose some number of Temples to compensate. The idea
behind Verdant Haven was to make us a quicker ramp deck, but you often had hands and games where you just ramped and didn’t do much else. I had originally
cut Courser of Kruphix and replaced it with Verdant Haven, thinking that Haven was basically just a quicker Courser, as it gave you the life immediately
and ramped you quicker.

Courser of Kruphix’s advantage and impact to the game is very subtle. Nobody ever really notices the card’s power unless they specifically look for it. If
Courser read “During one of your main phases, draw a card and you gain 1 life,” people wouldn’t give up on it so easily because of the word “draw.” But in
most instances, it does exactly that. It’s just worded a little differently. Trying new cards always has the potential to backfire, and in this case it
did. Forgive me Kruphix for ever doubting your creations.

The version ran much smoother for me than at the version from the Open Series a few weeks ago. Interpret the Signs was fantastic for me all day, and I wish
I had played a second copy because the first one was that impressive, but it may be correct to just play one.

Aetherspouts over Crux of Fate may look strange, but that was me trying to beat Temur decks because Ashcloud Phoenix, Whisperwood Elemental, and haste
creatures don’t really get answered by Crux of Fate alone. Unfortunately, I still died to Temur decks because of Crater’s Claws and haste creatures backed
up by Stubborn Denial, and I honestly don’t know how to beat that deck with anything resembling regularity. It just seems like they have a 90% win
percentage against Sultai. The only games I won were when they mulliganed or I just curved perfectly into Frontier Siege on turn 3 then into more relevant
spells turn 4 and 5.

Liliana Vess overperformed, tutoring an answer or hiding an Ugin on top of my library away from Thoughtseize. The only time I used her discard ability was
when my opponent had one card left in their hand or I already had enough threats in mine.

Kiora synergized really well with the deck, and she could put you very far ahead with a Courser in play. I almost always used her Explore ability first to
guarantee some card advantage out of her just in case my opponent had a Hero’s Downfall or a burn spell. After that, I would tick her up, and if she lived,
that meant my opponent didn’t have an answer for her, and I was clear to attempt an ultimate if I so wished. Don’t be afraid to play her just as an
Explore. If your opponent has a big creature out, she’ll gain you three or more life and Explore, and that’s usually good enough, since you have plenty of
other threats in the deck that can take over from there.

I’ve been contemplating just playing a singleton Warden of the First Tree in the maindeck to try and mimic Resolute Archangel while helping to close out
games. Only testing will tell if it’s good enough, but I sure do wish Elderscale Wurm was legal because that’s a card that could really help out here.

Here’s the version I will be testing out soon:

I feel like Silumgar is very well-positioned right now with the rise of control decks and R/W Aggro. It’s also very good against Jeskai Tokens and Abzan
Midrange due to hexproof. Note that Silumgar turns your Bile Blights into -4/-4 instead of -3/-3 and Drown in Sorrow into -3/-3 instead of -2/-2, something
that comes up more than you may think. It also works well with Ugin to take down a four power creature if need be. I assume if you have both on the board,
it’s going to be very hard to lose that game, but it’s minor interactions like these that you never want to forget.

I want to bring in Palace Siege against any non-Ugin deck to just drain every turn but could also recur Hornet Queens if that was something I needed to do.
The Warden of the First Tree might just be a worse Palace Siege, but, as usual, only testing will tell.

I’ve also been playing Gerard’s Sultai Control deck. This is the version I’ve been messing with:

This is very close to what Gerard has been having success with, with only minor changes in the sideboard. Even though these decks are both Sultai, they
play very differently. I felt like this take on Sultai was very unforgiving if you made any wrong decisions, but that also meant that every game was very
winnable if played correctly. There was a game I almost lost because I ended up casting not one, but two Satyr Wayfinders very late in the game when I knew
my deck still had a lot of gas.

I ended up milling three copies of Dig Through Times and an Ugin.

I even hesitated before casting them for that very reason. You may think “that’s silly” and/or “you can’t think about that,” but I strongly disagree. If
you have no need for a 1/1 body, have plenty of land in play, and know you still have a decent amount of game changers in your deck, I feel like it’s
unnecessary to play them that late; they might be better to discard to Sultai Charm.

That said, I did really like the deck. I feel like it’s one of, if not, the best control deck in Standard at the moment. It’s a control deck where you can
miss a couple of land drops and still win the game, and not many control decks in the history of time can say that. You have a bunch of decisions that you
can make, and you make the match very interactive. The deck also doesn’t lose to itself nearly as much as more traditional control decks like U/B Control.

As far as things I did/didn’t like, I wasn’t a fan of Interpret the Signs in this deck, and I’d personally play something else over it. I also believe this
deck could shore up some bad matchups with Perilous Vault and Aetherspouts. Crux of Fate can sometimes just not be good enough or not wrath the board like
it should thanks to flash creatures, haste creatures, various phoenixes, and in rare scenarios, Gods.

As I said earlier, I tried to combine my take on Sultai with Gerard’s, but after a lot of testing, I don’t believe these decks should be combined together.
While both Sultai decks are very good, they operate on different wavelengths. My Frontier Siege build wants Sylvan Carytid so you can cast it early, while
Gerard’s build really wants Satyr Wayfinder to hit land drops and fill the graveyard up. Having both of these cards in the same deck can make your deck
like a Magikarp: splashing around doing nothing.

Even though I love Sultai, I’ve been itching to play some sort of Fog deck lately, and that might be my next project. I think they’re a couple of different
ways to go about it, but both involve Dictate of Kruphix. I’ll probably start with a Bant Turbo Fog deck with counterspells, fogs, Bow of Nylea, Kruphix,
God of Horizons, and Fasincation and see where it goes.

I’m also gonna be working on a Waste Not deck like so many others have recently. Turn 2 Waste Not into turn 3 Dark Deal just seems incredibly hard to beat,
and I can’t imagine someone coming back from it (especially if you follow it up with Tasgur’s Cruelity and the like). I would give you a list, but I
honestly don’t know where to start besides 4 Waste Not and 4 Dark Deal. Is Commune with the Gods the way you want to go? Maybe fogs and Dictate of Kruphix?
Or just all in with Fate Unraveler and Master of the Feast?

But I’ll have fun trying to figure it out and most likely making my playtest partner Jeremiah miserable. Until then, may you always cast Eugene, the Spirit
Dragon when you have eight mana and may he always wipe your opponent’s board clean.