“Dogpile shouldn’t be in the deck. Any time this spell works, it’s a miracle.”
– Greg Weiss from the forums of C is for Combat

I can’t tell you how shocked I was to read that. I mean, Greg Weiss can hardly afford to throw stones regarding cards that don’t belong in decks. That is not a shot across his bow… I was just surprised that after all of his unorthodox card choices in Constructed formats – Elemental Bidding anyone? – Greg would be making blanket statements about the goodness/badness of cards.

Dogpile is by no means an all-star, but sometimes you have no choice. After starting off a draft in Green/White/Black, you find you have traveled down a dead-end Swamp. Suddenly you are padding your playables in sloppy-second Red cards, with a horde of cheap but underwhelming guys and no real removal. Suddenly, that 11th pick Dogpile looks like a lighthouse.

Sometimes you even want it for your deck. I have certainly had decks that specialize in doing seventeen points of damage. They churn out abundant token creatures, make cheap plays, and generally overwhelm a deck full of Durkwood Boars. Until that player stabilizes behind his fatties and you are running out of guys to send in on suicide missions. I splashed Dogpile in many a Selesnya deck in triple Ravnica draft to make up that three-point shortfall. 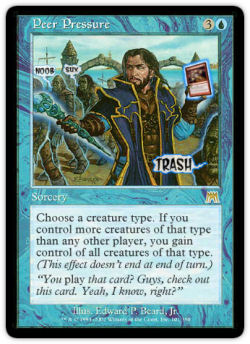 I know I am supposed to be writing about how people play Magic and their decision-making process at key points of the game, but I simply haven’t watched/played much Magic lately. I have had an ongoing battle with the flu that’s had more shocking twists than a Law and Order marathon. Every time I think I have the culprit put away and leave my hutch of wadded-up tissues and empty hot-and-sour soup containers, I am knocked back to square one.

I have been thinking about Limited quite a bit, and have been looking back at how my card evaluations have changed since Ravnica was released – I actually had Dogpile much higher, initially – and how much other people’s opinions can affect those valuations for good and for bad.

How many times have you beaten someone with the proverbial 23rd card in your deck, only to get the derisive “nice card” snort from your disgusted opponent?

I actually enjoy getting under an opponent’s skin with a “bad” card. I have taken special joy in having an opponent roll their eyes at Mindmoil, scoff at my Cloudstone Curio – first-picked, no less – or roll on the floor speaking in tongues as Halcyon Glaze goes off every single turn with the TLC of Crystal Seer.

I think there is far more to be gained from asking people about a card as opposed to telling them why they shouldn’t be playing it. In the opening weeks of the RRR draft format I could have scoffed at Chris Manning‘s Mark of Evictions – a card that would table consistently in those fledgling drafts – but instead we talked about how the card worked and it quickly jumped to the top of my Blue pick order.

At Worlds, a bunch of us did a draft against the Canadian National team and J. Evan Dean laughed at my Vedalken Dismissers – a card that was regularly going 13th pick on MTGO at the time. I shrugged and showed him the one that I had first picked in the second pack. He was incredulous and seemed more than a little frustrated at having been locked by double-priced Gray Ogre.

“I don’t know about the Dismisser, BDM, I don’t know,” sighed Evan as we settled up after the draft. He was not being a jerk or anything, but he clearly did not accept that my card evaluation – which was so dramatically different from his own – could be correct.

He apologized in Hawaii.

I am certainly guilty of the very same thing. I think we all do it. I do it to Mike Flores all the time. There was a running joke in the Top8Magic.com office when we were picking out sections to highlight in our promotional material for Mike’s book, where we would tick off Mike’s more famous columns:

Most of Mike’s accolades come for his writing ability and as a Magic player come from his ability to predict and attack Constructed metagames. We may tease him some about his draft skills, but I have to look back at the Ravnica block and give Mike some credit that he is due.

I remember one draft where Mike and I were on opposite teams, and he was passing to me. As three Faith’s Fetters made their way into the face-down pile in front of me, I could not imagine what Mike was taking over them – let’s not even get into what my teammate to Mike’s right was taking.

It turns out that Mike was picking Selesnya Evangel each time after a first pick Hour of Reckoning. His deck was amazing and ideally constructed, even though he was passing what was generally accepted as a more powerful card each time. I could not see that at the time. and was so locked into the idea that I had a better sense of card values than Mike for Limited that I may have hurt my drafts in the following weeks.

I became so invested in the idea that Faith’s Fetters was a better pick than Evangel that I missed the overall synergy of the convoke mechanic. I eventually came around and by Worlds I was happily first picking Fists of Ironwood, and Scattering the Seeds as a combat trick to save my Scion of the Wild… but it should have not come so grudgingly. Once Mike smashed me with the convoke strategy I should have been looking at what he did right, instead of essentially giving him the “nice card” treatment.

It certainly did not hurt Mike. In fact, he happily had all the Evangels he could handle in our next few drafts. The only person who was impacted by my stubbornness was me. Of course, that is not always the case. Sometimes the damage goes in both directions.

More recently I derisively questioned Mike’s inclusion of Cry of Contrition in a deck at PT Hawaii. I was not in the draft, but I was looking at his deck as they built. He had Cry in his playables and I flicked the card away and told him it was terrible.

I have since turned around on the card. Steven Sadin played it to very good effect in a Finkel draft, at the urging of Eric Kesselman. The drafters at Finkel’s play in a vacuum where their card valuations are based simply on trial and error. They don’t really read any Magic strategy articles, and could care less what anyone else might think of a card. If they have a whole box of matchsticks on the line, all they care about is winning, with no place for hurt feelings. Those guys were playing Junktroller long before it was cool, and while you may not give Blockbuster much more than a passing thought, when Jonny Magic tells you to side it in you do tend to listen – he is probably right. 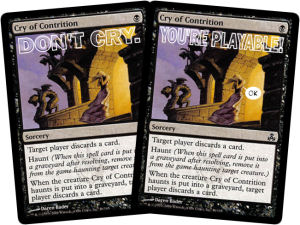 Based on Steve’s success with the one-mana discard spell I recently ran two Cry of Contrition in a draft deck with a couple of Shambling Shells and a fair amount of removal. The card is flat out good. You don’t have to take a whole turn off from developing your board to play it – most discard spells that hit two cards require an entire turn’s worth of mana – three or four mana is basically an entire turn. Sometimes it only gets one card, but more often that not it allows you to control the board. With a removal spell you can kill a guy and take two cards from hand. You can create an unfavorable block on the other side of the red zone. You can create an “unblockable guy.”

You can also create a pissed-off MichaelJ. It turns out that my certainty in Hawaii was such that the card has been an auto-exclude from Mike in all his subsequent drafts.

On the other hand, there have been times when I had exactly the opposite reaction – usually against U.S. Nationals Top 8 competitor Chris Manning. Chris – a regular at Neutral Ground and the Finkel drafts – is always willing to try out new cards, and will often force me to rethink my card orders in the opening days of a new Limited format.

I remember one early draft in particular where he tried out Mark of Eviction. As shocking as that may seem right now, it took a few whole days after the Prerelease for anyone in out local group to understand the potential of this card. Thanks to my willingness to listen to Chris’s position on the card I was able to have the rare experience of drafting a deck with multiple Marks before it made the rapid ascent in everyone’s pick order.

Sometimes the card in question – much like the titular Dogpile – is just a necessary evil. Sometimes you just have a match-up that you can’t deal with within the first 23 cards. You could hope your opponent gets double mana screwed in the remaining two games, or you could look through your sideboard and see if maybe – just maybe – this is the time to give Blockbuster a try.