Welcome to a by-the-numbers edition of Cubers Anonymous!

Today’s article is going to be a little less traditional than normal, as we have something fun to look at! As some of you may have guessed by the title, we’re going to be looking at real-time Cube statistics using my powered 540-card Cube. The term Cubermetrics comes from the real word Sabermetrics, which is originally a baseball term used to describe the use of statistics to measure a player’s game performance. I guess technically Sabermetrics is a made-up word too, but it is commonly used in baseball now.

Now, there are some key differences between Sabermetrics and Cubermetrics, as Sabermetrics are used to measure the statistical drawings of a baseball player. With Cubermetrics, we won’t be looking at the "players" (the card’s text) because Magic design space operates at a near infinite breadth, while baseball statistics measure a group of very specific categories that won’t change how the overall system operates nor will be added to or taken away from. Though we could break down the effect of every single card in my Cube, there are already hundreds of unique effects that don’t repeat to where we would be looking at a large number of isolated effects.

But that’s not what we’ll be looking at. Like Sabermetrics, we’ll be using past/current numbers to determine what the future could hold—and get a good look at Magic’s history in the process. Today we’ll focus in on the past numbers part.

Before we go further, I need to share two very important links with you. I want to apologize ahead of time to readers from a mobile device—I hope you can have multiple tabs open at once!

The first link is my Cube homepage in Google Docs. Every statistic we’ll be looking at is generated from data on this spreadsheet.

The second link is really the beef of this article itself: the numbers. This is what I’ll be referencing today in this article, and it’s necessary for you to have the spreadsheet up to follow along.

Though we’ll go through the spreadsheet in order, feel free to check all of it out now (as I’m sure 50% of you already did before reading this line). I’ll still be here when you’re done.

The first thing I wanted to do was look at each individual Magic expansion’s effect on my Cube. I always love to talk about which sets are most important to Cube, which sets are the least, the best big set, best small set, etc. Looking at the first sheet, the one named SETS at the bottom, there is a ton of stuff we can learn. Part of the fun of these numbers is exploring and finding things that surprise you, so I won’t go over every single detail.

This one was smashed out of the park by the original, Alpha itself. I counted it as all three original sets to ignore any Volcanic Island shenanigans. Even if you take away power, that only removes eleven cards (Moxen, Black Lotus, Mind Twist, Mana Vault, Ancestral Recall, Time Walk, Sol Ring) and still gives it a whole ten cards up on the next highest set. I think it’s awesome how even the breakdown of the colors are from that set, with each color getting six at most and three at worst, even with a couple sweet artifacts thrown in even if you exclude power. Since this would have been the easiest guess of all time, I wanted to guess the next highest set, and I went with Lorwyn.

As it turned out, Lorwyn was in fourth place with sixteen cards after Return to Ravnica with nineteen, Innistrad with twenty, and Zendikar with a whopping 22! I should have guessed that, as I forgot to take into account the whole cycle of fetchlands, which gave Zendikar a nice plus-five bump. It’s impressive how well the other three sets behind it placed considering none of them have a full cycle of five cards to be included in the Cube. Each of the top four is very deserving to have so many cards included as they do.

Like most people’s Cubes, my Cube has a slight nod towards cards that were released in the last year. That being said, I think Return to Ravnica will end up as a historically great set for Cube in five years, and the nineteen cards in my Cube from it right now speaks to that.

My guess was Mirrodin Besieged, and I was right on the money. MBS is tied with Worldwake at thirteen cards apiece as another awesome land cycle pushes a set into the high card count. If you’ve ever heard me talk about this set before anywhere, you know it’s one of my favorite for Cubes since is delivered cards to every section but lands—it even beat out original Mirrodin and Scars of Mirrodin! The most surprising small set was runner-up Urza’s Legacy, with a very impressive twelve cards.

How Many Actual Expansions Have Zero Cards?

That would be five, and they’re unsurprisingly the worst ones in Magic: Saviors of Kamigawa, Homelands, Prophecy, Weatherlight, and Coldsnap.

Zendikar Block smashes most everything else with 48 cards, though Innistrad block was close with 43. The Urza block did well for an older block, with 32 cards. Shocker alert: Masques block and Kamigawa block tied for last with seven cards each, both with a set picking up a zero. No excuse, though, as Mirage block put up fourteen just from Mirage and Visions.

Fifth Dawn, everybody! I would have guessed five or six cards from that set in my Cube, not twice that. Lots of powerful stuff in a small package, and not all artifacts!

Planar Chaos ended up with ten cards. Not too strange. Half of them were red. Really. You can go look.

For each of the next two sheets, titled CREATURES and NONCREATURES, I set it up as time periods of Magic, with roughly five years per period. Though I don’t think anyone is surprised at the advancement of creature development and its effect on Cubes, I’m not sure I would have guessed it would be this significant.

60 percent. That’s the percentage of all creatures in my Cube that have been printed in the last five years! Every color but blue has over 50% by itself, which is only bested by the previous five years. Surely the spells will be different . . . right?

Well, it is better, but it’s really only buoyed by the broken-in-half ABU era, which accounts for 42 of the 57 noncreature cards from that era by itself. It is more even than the super lopsided creature stats, but you still see the creep, with a full third of the noncreature cards in the Cube from the last five years, including lands! Even with the high density of recency, we still have some cool stuff to look at.

This very clearly happened during the Shards era, with white creatures from this era accounting for an enormous 67% of all white creatures and 43% of all white noncreatures. I honestly think that white is now the best color in Cube, as it’s been pushed from the bottom harder than any color over such a short span historically.

Blue noncreatures from the last five years only account for 12% of all blue noncreature spells, and that includes three planeswalkers (Jace, the Mind Sculptor; Tamiyo, the Moon Sage; and Jace, Architect of Thought.) If we remove those, it plummets to a paltry 5%. I would say Wizards has done its job of taking away blue’s toys from the earlier days, like the first five years of Magic where Blue still has a stranglehold of noncreature spells (though black actually has more!).

As could be expected, good lands are fairly consistent across each of the eras of Magic and don’t seem to be slowing down.

Another thing to file away in the obvious drawer—old gold cards sucked, and new gold cards do not suck. Apocalypse is the one expansion beacon of hope for multicolored cards from the first fifteen years of Magic.

Looking at the final sheet, labeled GENERAL, we have a quick breakdown of each of the card types as well as the curve for each color (excluding multicolor, though I’ll likely do one for each color pair later—check back!). Though there isn’t a ton to look at visually, the numbers are profound.

After compiling each of these, I was pretty happy with how each percentage per card type came out. I always keep a watchful eye on planeswalkers and creatures, as I want to make sure there are not too many of the former and enough of the latter. I think the planeswalker stat is right where I want to be, and I would like to have under 5% as a hard cap.

Creatures are the opposite, as I’d like to keep it well above 35% but below 40%.

I wouldn’t have guessed enchantments would end up so low, though I imagine that’s because the ones that do exist in Cubes are powerful and easily noticeable when on the battlefield. I have a feeling Theros block will take some steps to correct that anyway.

My goal has always been to keep red as the lowest converted mana cost and blue at the highest, and I’m happy to know that they’re fully 99% apart. I recently changed my black section (yes, again), and part of that was significantly lowering the curve at the cost of cutting some controlling cards.

I think I’ve gone on long enough today, so I’ll let everyone continue to explore the spreadsheet. I’d like to hear some discussion about it in the forums! Thanks everyone for joining me; I hope you enjoy checking out all of these stats as much as I did putting them together!

If you want to learn more about Sabermetrics without being bored, check out the book Moneyball or the Brad Pitt movie of the same name. [Editor’s Note: My number one movie of all time currently.] The book is super-duper interesting if you like statistics, and the movie is great too on a more pure entertainment level. 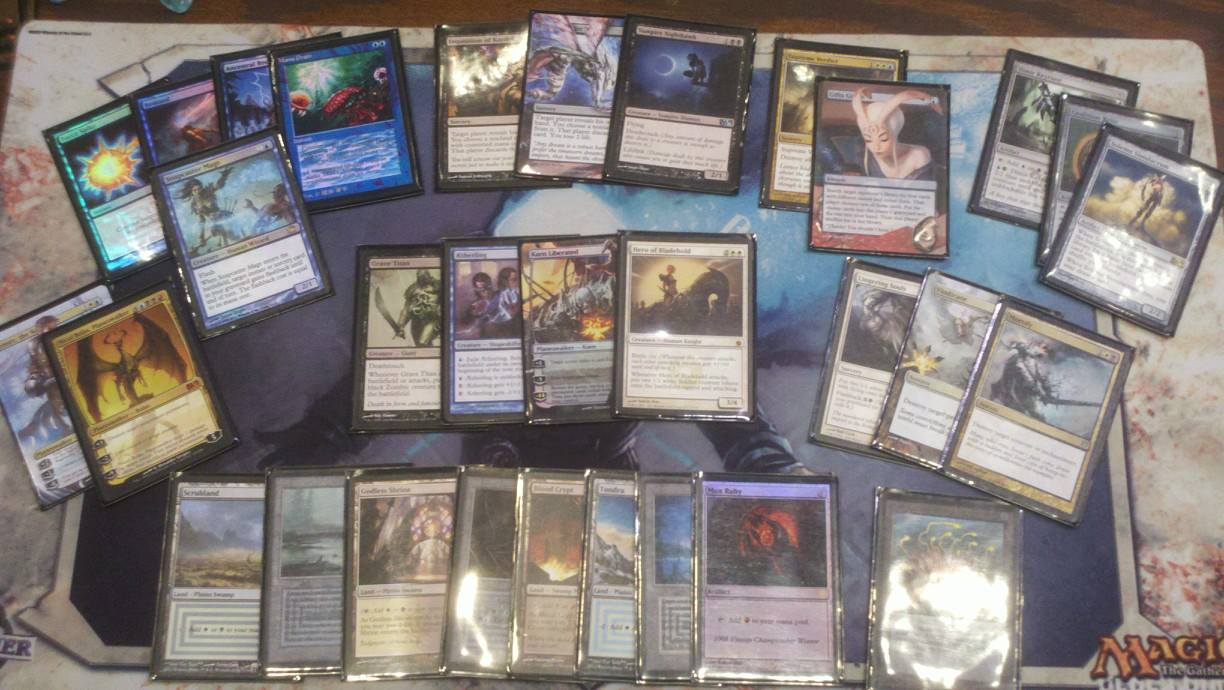 Draft my Cube on CubeTutor.com!