As a cube encompasses the history of Magic as a collection of the game’s best cards, some cards in cube are in a unique position because they provide a unique effect—either to a color or the cube itself. In this article, I’ll be discussing the importance of unique effects and how some cards that may be remarkably similar may or may not make it into a cube for reasons other than simply power reasons.

For some of these types of unique effects, they end up in cubes because they’re “color-shifted” effects that the other color lacks. Take, for example, some of the color-shifted cards that have been featured in cubes due to this. 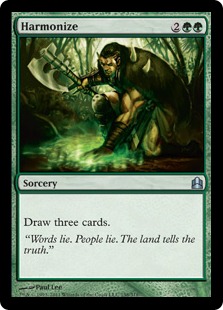 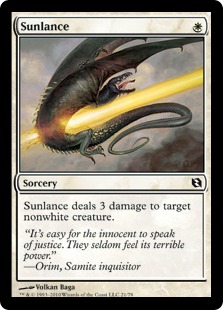 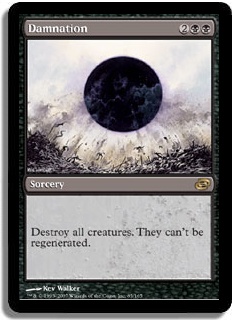 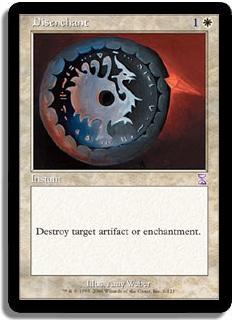 Although Harmonize has recently fallen by the wayside in many cubes, it was in cubes for a much longer period of time than the original blue version, Concentrate, despite being the exact same card. Is green that much worse than blue that it plays a color-shifted version of a low-tier blue spell simply because green is that bad? Although you could argue that green isn’t as strong as blue in cube (especially in cubes that use cards like Ancestral Recall and Time Walk), that isn’t necessarily the reason why Harmonize lasted longer than Concentrate.

Harmonize plays better to green’s strengths and weaknesses than Concentrate does to blue’s strengths and weaknesses. Blue has no shortage of pure card draw in cards like Deep Analysis, Thirst for Knowledge, and all of the iterations of Jace, but green doesn’t tend to have much in the way of being able to dig for answers. Green gets card advantage through cards like Krosan Tusker, Yavimaya Elder, Life from the Loam, and Acidic Slime, but green can’t really dig for answers when the deck needs to find them, such as when green midrange decks need to get access to a ramp target quickly or if green-based aggressive decks want to dig for their direct damage/reach elements.

Green decks tend to not care as much about keeping mana untapped on the opponent’s turn (although instant cards like Vines of Vastwood and Beast Within are used in that way, they are a much smaller part of the green strategy than blue’s instants are to the blue strategy), whereas blue decks use instants far more often than green ones, so Harmonize’s sorcery speed isn’t as much of a drawback for green mages as Concentrate’s sorcery speed is for blue mages. The ability to dig for answers as effectively as Harmonize was unique in green and helped green decks shore up a potential hole in their game plan—what to do when in a state of attrition or when the deck needed to find an answer ASAP.

Sunlance is another example; it was a planeshifted version of Strafe, a suboptimal removal spell for red, but a card that saw fringe play in white sections of cubes and is a staple of white sections of common cubes. Red obviously has access to insane direct damage like Lightning Bolt, Burst Lightning, and even the straight-up upgrade in Flame Slash.

Unlike Harmonize, which provides a relatively unique effect for green, Sunlance’s effect isn’t necessarily unique, as white has creature removal. However, Sunlance instead bolsters and reinforces white’s existing creature removal, as in a format like common cube, white doesn’t have as many options at one mana, as in that format, it is Icatian Javelineers and Kirtar’s Desire, and Sunlance helps to deal with creatures at that mana cost, since white has a lot of creature removal at two mana with cards like Pacifism, Journey to Nowhere, and Temporal Isolation. This need isn’t as dire in uncommon/common and cubes with rares, since white has cards like Swords to Plowshares and Path to Exile, so white generally doesn’t need to use Sunlance at that rarity, but much like Harmonize and Concentrate, the fewer options made Sunlance last much longer in cubes than Strafe ever did.

Damnation is an interesting example, since both Wrath of God and Damnation are cube staples—but Damnation shows that because of the uniqueness of the effect in black, it generally gets picked higher. This is because while black has access to Damnation, its non-Damnation mass-removal effects are generally weaker than white’s, as white has access to Day of Judgment, Rout, Catastrophe, and a slew of other suboptimal six-mana mass-removal effects like Austere Command, while black has access to other non-Damnation ones like Bane of the Living, Black Sun’s Zenith, Decree of Pain, and Life’s Finale, all of which arguably pale to white’s options due to them being less efficient. Still, some of these options like Bane of the Living and Black Sun’s Zenith are still used in cubes because while they’re obviously not Wrath of God/Damnation, they still provide a powerful effect for black midrange and control decks.

While Disenchant is not a color-shifted card (one could argue that Naturalize is a more permanent color-shifted card to match modern design ideology), many cubes use Disenchant and Seal of Cleansing but wouldn’t consider Naturalize or Seal of Primordium. Why? It isn’t because there are other green Naturalize effects like Krosan Grip and Nature’s Claim whose competition edge out Naturalize. Instead, it is because green has many other options with bodies attached like Viridian Shaman, Nantuko Vigilante, Uktabi Orangutan, Wickerbough Elder, Acidic Slime, and Indrik Stomphowler, whereas white has Kor Sanctifiers and the more tempo-oriented Leonin Relic-Warder. Green having many more options in creature form—at mana costs that green decks can achieve without too much trouble—make it so that green decks don’t need to rely on using the non-creature versions. White has such fewer options that it doesn’t mind using cards like Disenchant/Seal of Cleansing.

Obviously, there are limits to the rule of unique effects for cube. Gate to Phyrexia may give mono-black decks a unique on-color way to deal with artifacts, and Darkness may be unique as a black Fog effect, but both are still objectively really bad cards, and you should never cube with either of those cards. Keeping colors’ strengths and weaknesses in mind is a vital part of card evaluation, especially for cube and its sections, and it’s important to not lose sight of the fundamentals of card evaluation. If a card’s power level like Gate to Phyrexia is bad, its having a unique effect shouldn’t really matter because while it is providing a unique effect to the color, it isn’t contributing positively overall to the color, as it’s just a bad card. A unique card, but a bad one nonetheless.

Other examples are cards that provide a unique effect, adding some spice to a cube environment.

Some unique effects are those which just haven’t been seen on other cards for cube. Mind Stone is a unique card for being a mana acceleration card that cycles in the later stages of the game. The Tangle Wire/Smokestack tag team provide asymmetrical effects that punish opposing players for using few permanents. Squee, Goblin Nabob combines with a lot of already good cube cards like the Masticore trio, Psychatog, and Enclave Cryptologist. These cards stay in cubes because of their overall power level, not solely because of their unique effect.

Other examples are some cards that provide a unique effect but aren’t necessarily as powerful as something like Armageddon/Ravages of War. 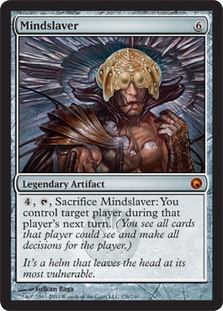 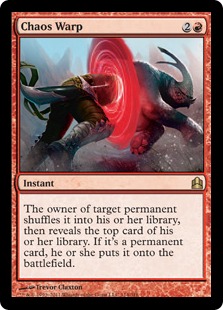 While Sorin Markov is a cubeworthy card that also takes control of opponent’s turns, Mindslaver is something that could do it more consistently and quickly (although Sorin does other things very well, like taking two-point chunks out of an opponent/opponent’s creatures). The insane competition from the Scars of Mirrodin block has made Mindslaver leave many cubes, but it still sees some play in cubes because the effect in and of itself is a unique and dynamic effect. There are few stories in cube that are better than a Mindslaver story, and these kinds of stories (as well as the potential to absolutely demolish an opponent’s board/hand/life) make Mindslaver stay in those cubes.

Chaos Warp works in a similar way to both Mindslaver and the previously mentioned cards like Harmonize. In a purely evaluative manner, Chaos Warp helps red decks deal with some critical weaknesses like enchantments or planeswalkers with a lot of loyalty like Karn Liberated, Gideon Jura, or Nicol Bolas, Planeswalker, and when I ran Chaos Warp in my cube, its main use was to help red decks shore up that weakness, as Chaos Warp was a unique effect that dealt with a critical weakness. However, much like with Mindslaver, Chaos Warp provides a unique effect on gameplay itself, as it makes spectators see if the opposing Karn becomes a land or something like a Sword of Feast and Famine. Although I ended up taking Chaos Warp out of my cube, the unique effects, both on the gameplay itself and its ability to deal with enchantments and high-loyalty planeswalkers, are the factors that I miss most. 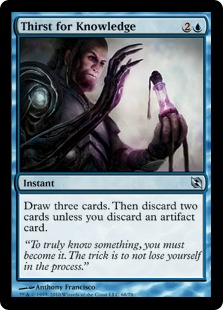 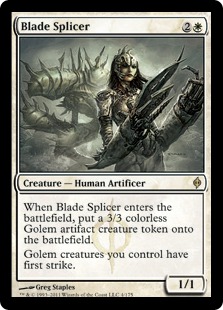 I’m not advocating adding narrow cards just for the sake of adding an archetype to a cube, like adding a lot of narrow tribal or storm-related cards to try to shoehorn in an element to a cube. Adding cards to even try to support those archetypes wastes a lot of space on weak cards. Instead, cards like Animate Dead and Blade Splicer can be used to support artifact-based and token-based decks respectively. These cards aren’t necessarily unique in and of themselves; there are a ton of token producers in white (especially at three mana nowadays with Spectral Procession and Midnight Haunting) and artifact-based synergy cards in blue. Instead, adding these already good cards and others like them can add unique elements to cubes.

A problem that can occur in cubes is that the decks of the same archetype can blend together with little differentiating one deck from another. A blue/black control deck from one week can look extremely similar to another, which can lead to the drafts feeling stagnant if very similar decks of the same archetype pop up again and again. I’ve been lately adding more support for white tokens, not only because the token theme is very synergistic with white aggressive strategies, but also because it provides a unique element that differentiates it from white aggro decks using big creatures like Mirran Crusader and Calciderm. Similarly with blue artifact support and black reanimation support, cards like Animate Dead and Necromancy are very good in black midrange/control decks anyway, but giving this support can encourage drafters to seek more reanimation-based strategies in their black decks, whereas next week, the drafters may not need to use Animate Dead and Necromancy. Cards like these can add a unique element to cube deck archetypes to help to shake things up.

I hope that this article has given you some insight into how unique cards play an interesting role in cube and how using unique cards can help to provide some dynamics and spice to a cube environment.

@UsmanTheRad on Twitter
My blog featuring my powered & pauper cube lists: http://idratherbecubing.wordpress.com
Cube podcast that Anthony Avitollo and I co-host: The Third Power