I’m going to cover the Gifts Ungiven decks first because, let’s face it, those are the sweetest. Primarily, Gifts is used for:

3) Set up Tron pieces and then finally, a Mindslaver lock

Unknown master (and brewmaster) BryanG took this version of Gifts to a 3-1 finish in a recent Daily Event. These types of decks don’t have any flashy
finish like Unburial Rites. Often, the first Gifts will be for removal spells or disruption, depending on the matchup. Once you’ve established some
board control, you can Witness back Gifts and start setting up your endgame.

In this deck, that endgame involves a Yosei, the Morning Star lock with Sheoldred, Whispering One. You can use Birthing Pod to set up the lock, but you
could also do it the natural way. If that fails, there’s always Worm Harvest to fall back on.

The main issue with the “value” versions is that they don’t provide anything new. When you look at it, it’s just a Rock deck, and Rock is notorious for
being underpowered and weak.

I’m not sure what to think about the above list. On one hand, we have an updated version of Five-Color Control with more toys, but on the other hand,
it looks like it has too much going on for its own good. You have Gifts to set up Unburial Rites, Snapcaster recursion through Rise / Fall, and
backdoor Cruel Ultimatum recursion through Snapcaster Mage.

That just seems like too much going on. From my experience with these decks, it’s best to focus on one plan that you’ve decided is better than the
rest. I mean, what kind of situation do you have to be in where Gifts-ing for Unburial Rites and Iona isn’t better than an eleven-mana Cruel Ultimatum?
Graveyard hate is going to get you no matter, so that’s not a viable argument.

On top of that, I’m not sure I like the Gifts packages for combo or even aggro matchups. If you’re going to bend your mana base to incorporate Esper
Charm, Timely Reinforcements, and Disenchant, you’d think that you’d want something other than Firespout, Damnation, and Engineered Explosives as
sweepers. The classic Day of Judgment / Wrath of God / Damnation suite is perfect here.

If you can’t Gifts for three Wraths, Zoo decks with Tarmogoyf and Knight are going to beat the crap out of you. In reality, this deck is playing red
for Lightning Bolt and Cruel Ultimatum when it should probably have a heavier white element.

Check out the next list by Michael Hetrick, a name you may have heard of.

Now this is focus. Hetrick has zero real sweepers because he knows he’d rather push the Unburial Rites strategy. Against combo, he can fetch up four
counterspells. When facing down a troublesome permanent, he even has three answers.

What really impresses me is his dedicated use of Talisman of Progress over similar, “better” options like Azorius Signet. Clearly you want to play your
accelerator on turn two, but Signets don’t let you cast Path to Exile or Spell Snare on turn two. I could see others shying away from the “worse”
painland version but not Hetrick.

Another thing to note is his transformational sideboard with Geist of Saint Traft. You need a real plan against graveyard hate, and Geist performs that
task admirably. Hetrick also has double Unburial Rites and more fatties than most, along with Thirst for Knowledge in case he draws them.

Of all the Gifts/Unburial Rites decks, I would suggest Hetrick’s.

I played Tron at Worlds and would have had a very good record had I not played terribly. Tron just happened to be a great choice against the untuned
decks everyone was playing. However, post-Worlds, I realized that there was no point to not playing Unburial Rites in any Gifts deck. Once I went down
that path, there was really no reason to play the Tron lands instead of blue, black, and white duals.

The late-game Mindslaver lock would be great against other control decks, but those aren’t popular right now. Not only that, but an opponent’s
knee-jerk reaction after losing to a Gifts Ungiven is siding in graveyard hate. That alone means that you aren’t likely to set up any sort of lock.

Post-board, I wanted to fight my opponent’s crappy hate cards, causing them to be dead. Things like Wurmcoil Engine and Baneslayer Angel are pretty
awesome when your opponent just sided out Paths for Surgical Extractions.

Like I said, I don’t see a reason to not play Unburial Rites. Even if it just means playing a Watery Grave, two Prismatic Lens, a Rites, and an Iona,
it should be there.

Okay, fine, this deck doesn’t actually have Gifts Ungiven in it. Honestly, when I first saw it, I assumed it did. Gifts typically plays well with Life
from the Loam, retrace, and Unburial Rites, but this is probably an example of something that’s trying to do too much.

First, there’s the half-assed attempt at a Doran deck. You’ve got some disruption, removal, and beaters, but then you have the control package. You
have a Loam engine that goes two different ways—either Trade Routes or retrace, and after all that, you have a huge mess.

What happens when you draw a Trade Routes, a Tarmogoyf, and some removal? The Goyf isn’t going to get there on its own; your removal won’t let you hold
on for too long; and Trade Routes will be complete garbage.

At least there’s an Unburial Rites, but the biggest thing to get back is Sun Titan. That just isn’t impressive enough.

This is another update to Five-Color-Control, but a little more focused. It mirrors the older lists a bit more, but that just means it’s not very
powerful. Rune Snag doesn’t strike me as a very powerful card in this format. Grinding people out with Esper Charm and eventually Cruel Ultimatum isn’t
my idea of awesome.

I think that, to compete, you need to focus hard on Teachings or Gifts. Just pick one and roll with it. This list has Teachings as an afterthought and
nothing really powerful going on. Adding a bunch of different colors doesn’t actually add that much from the normal U/B or Esper builds of Teachings.

This list seems fine. I like the use of Tar Pit over Colonnade, but that’s a nitpick. Surgical Extraction seems a little better maindeck than
Extirpate, but that’s another nitpick. I love the idea of White Sun’s Zenith as a finisher, but where are all the Cryptic Commands? Most of these lists
jam four because it’s a good card when in reality, it might not be all that good in the deck.

In fact, I’m more partial to the builds that feature Rewind and Dralnu, Lich Lord. Dralnu gives you that midgame soft lock whereas most of these decks
would struggle for control and eventually lose their grasp on the game.

One other thing I like about this list is the fact that he only ran one of each dual. I mean, honestly, do you ever want to fetch out a second Watery
Grave? Wouldn’t you rather naturally draw a Darkwater Catacomb nearly every single time? Not only is it better for your manabase, but it’s better for
your wallet as well.

To close out the article, I’d like to take a list at a couple different strategies—Faeries and Aether Vial.

I’m honestly not sure what to make of this one. I know the pilot, and I know he’s good, but I also know that he likes to play Slippery Boggle in
Legacy. That’s right, Slippery Boggle. Can you truly respect a man who stoops so low, or are you forced to respect him?

His list is reminiscent of both Flores’s lists from last week but also from the Ancestral Vision Faeries era. I think that, compared to Flores’s, his
list flows a little better thanks to his lower curve but also seems more tuned. It looks like he knows how many of each effect he wants rather than
jamming cards as four-ofs that can’t be right (I’m looking at you, Vedalken Shackles).

However, the sideboard looks like a complete mess, so maybe I’m totally wrong. Either way, the strategy is a sound, proven one, even if it lacks
powerhouses Ancestral Vision or Bitterblossom. I’d feel a little strange playing this in a big tournament setting, as you have to grind for virtually
all of your wins with an underpowered tempo deck. I think I’d rather try a U/B Delver/Confidant deck instead.

Pro Tour Berlin top eight-er Denis Sinner has done pretty well for himself on Magic-League with this brew, and it’s easy to see why. For starters, he’s
probably pretty good. Secondly, Modern is still a relatively underexplored format, and an aggro-control deck can be very punishing. He’s also putting
Aether Vial to good work and has access to colors that give him plenty of options vs. the field.

My next article will wrap up the series and provide some crazy Tezzeret brews!

P.S. Some of you might remember when I wrote that, in order to play Affinity in a Modern tournament, you’d have to be a “sick, sadistic person.” Well,
Steven Birklid did. He posted the following on Facebook: 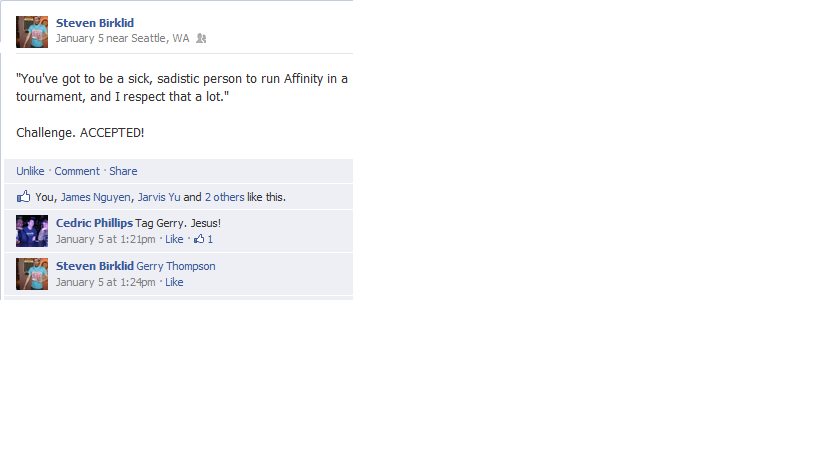 A couple days later, it was this: 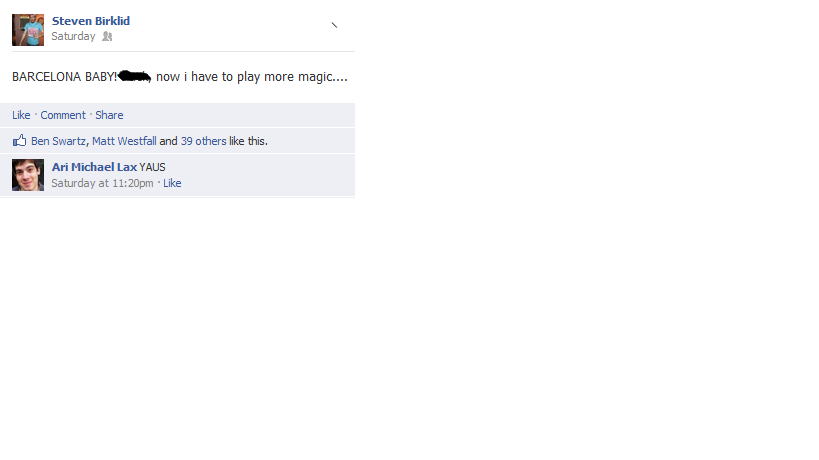