2: a mood for finding or making amusement

My idea of fun when playing Magic is no different from that of most serious tournament players. I enjoy winning, which to me is where the fun is. Odds are if you are reading this article, this site, or any other strategy website, you play to win the game. Most of the enjoyment you receive playing Magic comes from winning for you, along with the satisfaction and the acknowledgement of a job well done. You want to crush your opponents into the ground and win event XYZ. The easiest route to victory is often having an edge; the biggest edge one can have in any given Magic tournament is having the “best deck.”

Playing with a completely absurd advantage against people is fun; you know why?

Because I am probably going to win… 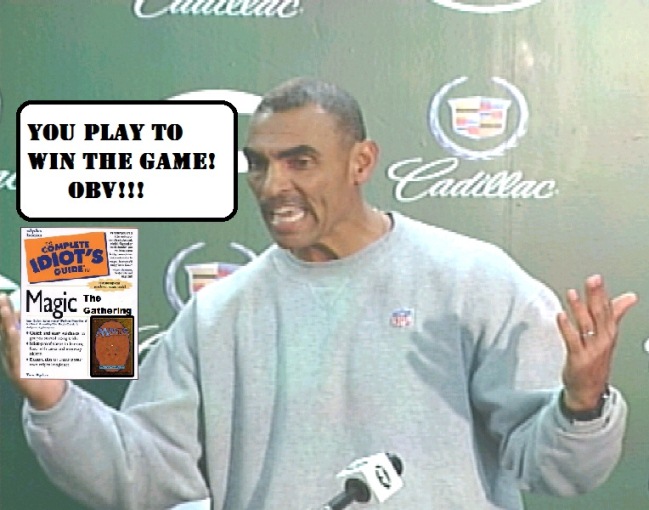 I feel a lot of my bias for wanting a top deck or wanting to play with something that’s “broken” is really reflective of the time when I began playing Magic competitively. I starting playing the actual game during Onslaught block, but I began to attend tournaments during the original Mirrodin block. I have heard numerous conversations and read through various articles about how Ravager Affinity was one of Magic’s low points and may have even caused people to give up the game; ironically enough it’s exactly what drew me into the game.

The off-the-wall and complex interactions one would face when playing with Ravager Affinity really intrigued me. Combat damage stacking, APNAP (Active Player Non-Active Player) when there were dueling Disciple of the Vaults, modular triggers, etc. The depth of the game I witnessed from countless Ravager Affinity mirrors is really what captured me and turned me into the dedicated player I am today.

The other part of that is because there was such a boogeyman in the format; I liked having the challenge of coming up with something to beat it. It was just something else about the game’s tournament scene that really intrigued me and drew me in further, the rewards you could receive for potentially knocking off public enemy number one… Ravager Affinity. It was all part of the lure and draw of the game for me. Trying to compete at the highest levels of the game, earn Pro Tour invites, beat the best decks, and beat the best players (OMG IS THIS AN OP ARTICLE?!?!…). Having a deck with such blowout-your-face raw power while providing some skill-intensive mirrors was mind-blowing to me. It would be a long while before I would play anything with the raw power Affinity possessed. (…No we have had enough OP articles.)

I took a hiatus from the game during my final years of college to focus on my studies, from Lorwyn through Shards of Alara block. One of my favorite formats, seven-year Extended, was going to rotate by the time I returned and altogether change. When I took my hiatus, my collection stood at six decks from the current Extended season in 2007… Psychatog, Enduring Ideal, Scepter Chant, Goblins, Gifts Rock, and OBVIOUSLY DREDGE were the decks I had.

“This is why the World Series of Poker is decided over a No-Limit Hold ‘Em table.”

“They can’t handle the swings.”

I eventually finished school and was looking to play again, but I didn’t know where to begin. Initially it was drafting the newly released M10 set at my local store. I figured I could at least try to break back into Standard eventually by accumulating the cards via draft. I wanted to play Constructed really badly but initially did not have much money to invest back into the game.

My good friend, Mike Noble, who played a lot of Vintage himself, suggested that I try sticking to Eternal formats, since I could use strategies that I loved but had rotated from Extended. At the time this seemed bizarre to me, since I primarily only played PTQ formats. However, thanks to Wastelands only costing $15 at the time and the local Vintage tournaments being 15 proxies, I began my foray into the Eternal formats, my reintroduction into Magic. Goblins (Legacy) and Dredge (Vintage) thus became my default decks of choice, as the other decks I owned never quite made the transition to Eternal… The power levels of these two decks at the time were close enough to Affinity to remind me of what initially drew me into the game. I was instantly hooked… especially to Vintage.

Again the format’s raw power but skill-intensive battles were an adrenaline rush to me. Just railbirding the blue on blue mirrors in Vintage was a big enough draw for me. The ability to topdeck such a powerful card at any moment, it felt reminiscent of watching two heavyweight boxers trade haymakers in the ring. Despite going 0-3 drop in my first ever Vintage tournament, I found a format that I love. The only format I have been able to compare to no-limit hold ’em. The swings are monstrous, the topdecks are river rats, and Tinkering for your Blightsteel Colossus into your opponent’s full grip turn one is equivalent to shoving all in… 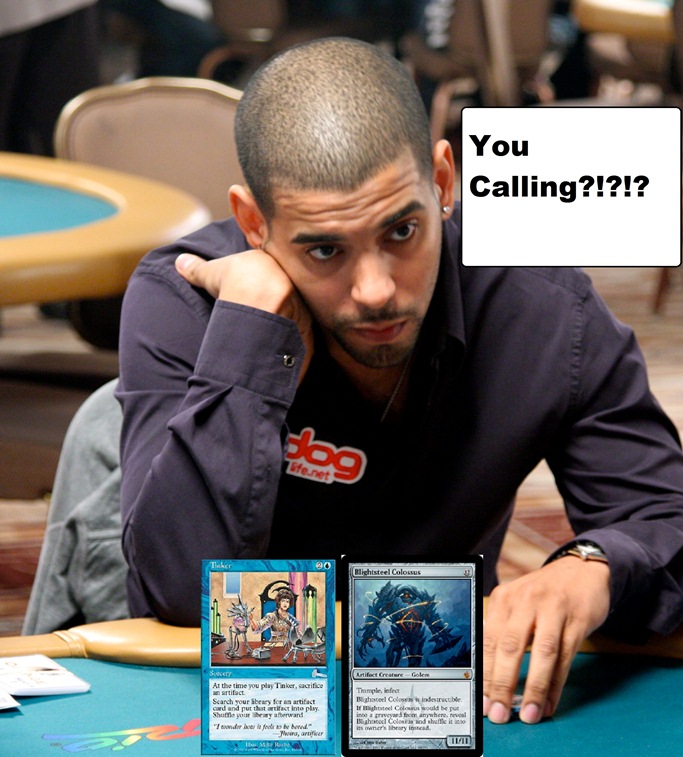 The highs and lows are so intense I feel it may lead some to shy away from the format. Vintage is very similar to other formats though; instead of the inevitability you get when staring down a Primeval Titan grabbing some Wolf Run action or Jace, the Mind Sculptor Brainstorming every turn, it happens at a much faster pace, hiding the illusion of control others feel they have when facing inevitability in the other formats. Most people are intimidated or just put off by the sometimes sudden endgame that occurs, but for the most part that’s not the case in the majority of Vintage games.

Trying to brew new ideas in Vintage is something that is extremely tough to do. The majority of the card pool has been out since the game’s inception, and for the most part the majority of the cards have been analyzed. It’s an equally daunting experience going through Gatherer and just searching ALL without any search constraints… My first brewing experience was for the N.Y.S.E. Challenge III in October of 2009.

I brainstormed an idea with my friend Walter Wertz for a new Vintage deck for this tournament. Bloodghast was just printed, and I felt there was potential for this card outside of Dredge. Thirst for Knowledge had just been restricted, and the blue-based decks were without their primary draw engine. We were going to create an engine with Bloodghast and Skullclamp. The idea was that we were going to be making out our mana commitment each turn whether it was Remora, Clamping, or Meditating. To protect ourselves, we wanted “free spells” to help protect the deck as it was drawing cards. I feel it may even have better potential in this metagame thanks to both Mental Misstep and Flusterstorm being extremely mana efficient for the deck. The whole process of building a deck with a new idea and testing it was quite the eye opening experience. The trial and error of going back and playing multiple games with essentially the same deck can be tedious, especially when you are only changing spell quantity to help drawing probabilities. After throwing the deck through our perceived metagame gauntlet this is the list we ran.

Then the day came. We had both registered our blue-based control decks with our Ghast-Clamp engine. We battled very valiantly throughout the day as we went over our plays and sideboarding techniques in between rounds. At the end of the day, Walter had finished 9th, and I finished somewhere in the teens out of fifty people. I felt very good about the performance and our results. The brewing bug was now instilled into me; it was now my fun. The next chance to indulge in my new fun would be at the StarCityGames.com Standard Open, coming to my home town of Philadelphia.

At the time I wasn’t much of a Standard player. I probably played one game of Standard in the two months prior to the Open. I figured since the Open was coming to town, I would try to give Standard a whirl. I wanted to play a Jund deck, one that would be able to support Vengevines, but I also wanted to play Jace, the Mind Sculptor. Essentially, I was trying to find a way to have my cake and eat it too. I also had included Spreading Seas and River Boas to my original deck. The logic there was that Spreading Seas at the time was a good card to mess up Jund’s mana base, and River Boa could perform a lot of functions in the deck against the field. It could turn into an unblockable attacker and also play some good defense with its regeneration. I took the deck to my local shop to test it against some people. The deck was putting up pretty average results. Not fully understanding the Standard metagame as a whole, I looked for opinions from people who did understand it.

The day of the tournament I had Craig Berry and his friend Shay show up on site and help me tweak my deck to battle the current metagame. After going over sideboarding strategies with everyone, I sleeved and registered my 75 found here.

The deck performed really well all day and powered me to an X-2 to finish the tournament at 13th place. I was having fun, not only because I was doing well with the deck, but because it was what I wanted to run. I even had the nuts round one, game one: turn one Noble Hierarch, turn two Lotus Cobra, turn three some fetchlands for a Sphinx of Lost Truths, which let me discard three Vengevines, and then turn four Bloodbraid Elf. From that moment on I knew that today, no matter what the end result, I was going to have fun. Too often I have seen close friends get burned out because of their obsession to win a blue envelope, Nationals invite, or a premier event top 8… they forget why they started playing the game: because it is fun… but then again I guess winning will always be the only fun for some people…

The swings that you can get from playing Vintage are just not comparable to other formats. I guess that’s one of the reason I see myself playing the format for a long time. Also the challenge to brew and come up with new competitive decks will always intrigue me. The possibilities with Vintage’s card pool are enormous, only adding to the challenge.

Why do you play Vintage?

Why don’t you play Vintage?

Everyone loves decklists, so I am going to leave you with two of my more crazy ideas. I know the lists and ideas may seem rough or just flat-out BAD! But hopefully they encourage you to play a Vintage deck of your own concept or brew…

“If you’re not failing every now and again, it’s a sign you’re not doing anything very innovative.” –Woody Allen