When preparing for a new Standard format, it’s nearly impossible to predict how things will shake out. That’s why you should push the different strategies as far as they can go, because you don’t know what will end up being viable. What matters also won’t be readily apparent.

Clerics immediately interested me because of the recursion and stickiness of the various threats. Orzhov is also a solid color combination with access to disruption and answers to whatever your opponent might throw at you, which can be helpful in a new environment.

The amount of reanimation we have is almost gratuitous. 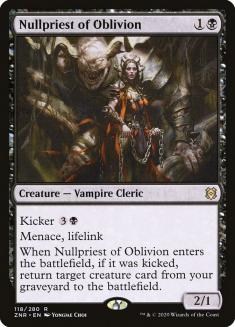 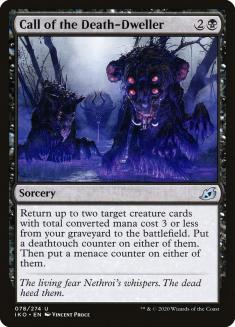 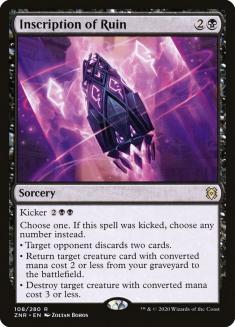 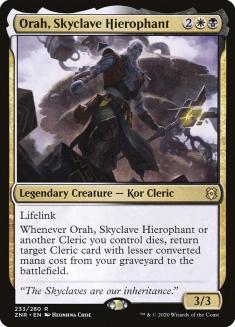 Combined with various sticky threats, it’s going to be difficult for your opponent to break up your recursion. If you want to go deeper, there’s also Nissa of Shadowed Boughs for off-color reanimation. 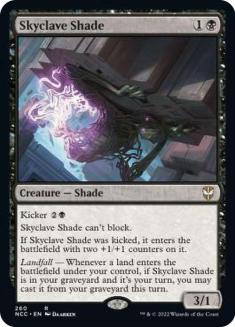 Malakir Rebirth is pseudo-reanimation and Skyclave Shade reanimates itself, if that’s something you can utilize. It provides yet another way to use your mana in the late-game and helps keep Village Rites active, even if that’s a bit expensive.

Over the last year of Standard, a midrange-leaning aggro deck with a ton of recursion wouldn’t have been viable against Fires of Invention or Wilderness Reclamation, but that’s not the environment we live in now.

This was how my adventure with Clerics went.

This is what Clerics are supposed to do, right? Gain life, take life, and win the game eventually? With cards like Cleric of Life’s Bond and Vito, Thorn of the Dusk Rose, certainly they want us to go down that route. But what about Taborax, Hope’s Demise and Orah, Skyclave Hierophant? We’re a little conflicted here, but let’s try to make both work.

People keep mentioning Vito and talking about playing it, so it’s in my decklist, even though it seems very weak to me. Maybe Speaker of the Heavens is what you should be building around? There are plenty of ways to keep it on the battlefield but not many ways to gain large bursts of life. Your manabase can deal you some damage too, so it’s tricky.

Designing manabases for this format is going to be wild. This deck has eleven modal double-faced cards (DFCs), each of which I’m relatively happy with. That leaves us with a healthy amount of options for total land count. Do we want our DFCs to be spells most of the time? Some of the time? In the end, I settled on seventeen land, but most have been going much lower and with fewer DFCs. I’m leaning toward being conservative but that will change between archetypes.

Lotus Cobra must die on sight. Some decks should be able to power through whatever nonsense Lotus Cobra will get up to. At the very least, we have a baseline for what sort of interaction the format dictates.

As always, Agadeem’s Awakening is going to be absurd in a creature deck. Ideally, whenever our opponent tries to remove our battlefield, we’ll be able to reload immediately. Eventually they’ll succumb.

Strict lifegain might not be the way forward. As I mentioned, there’s some conflict of interest in Clerics. Neither the strict lifegain package nor the recursion aspect seems particularly strong. I still believe in Orah though. Moving away from lifegain likely leads to playing some non-Clerics and sticking mostly to power level.

I mostly wanted to build around the interaction between Demon’s Disciple and Orah, Skyclave Hierophant. Orah is already annoying to deal with. Getting to the kicker on Nullpriest of Oblivion seems relatively easy in most games and Orah is the prime target.

Unfortunately, we’re too short on Clerics that encourage you to grind. Unless you want to play a mini-lifegain package, you can’t play a full Cleric package. I had to play Drannith Healers just to cycle in order to have enough Clerics to return with Orah. Maybe that’s not the worst thing in the world but it doesn’t feel like that’s an angle a good deck would have. 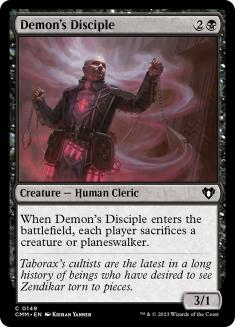 If you get to return Demon’s Disciple with Orah or cast it when Orah is on the battlefield, you’ll get a ton of value. However, without the full boat of non-lifegain Clerics, going all the way down the chain with meaningful hits is going to be difficult. Pioneer, on the other hand, has plenty of great Clerics…

So, lifegain it is? Maybe. I’m at least going to try this. Coming up short on cards I’m happy to play deflated me a bit but that’s been common so far. Small Standards typically leave me with that feeling.

We could use Village Rites to get rid of Archfiend’s Vessel but Demon’s Disciple can mostly suffice. I love Village Rites as a card but there aren’t enough good, cheap sacrifice targets for my liking.

This deck isn’t bad but maybe we can do better.

This one was mostly inspired by Bryan Gottlieb and his quest to make Agadeem’s Awakening lethal once you have Bastion of Remembrance on the battlefield. Bryan has also been working on some Dimir versions, so to maximize the potential of Agadeem’s Awakening, he was probably right to avoid white altogether.

Stonecoil Serpent is in the deck just a zero-mana creature to get back with Agadeem’s Awakening. Bryan wanted to push the deck in a direction where it could kill immediately with an Awakening and I agree with that direction. 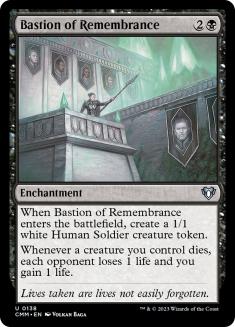 Liliana’s Steward is another option. It doesn’t look like strictly grinding out opponents will work in a field of Uro and Omnath, Locus of Creation but it could. In the meantime, I’m going with the extra drain from Serrated Scorpion since it has more synergy with Bastion of Remembrance.

These decks would be so much stronger with Cauldron Familiar and Witch’s Oven. Obviously I’m fine with those not existing but I can’t help but feel like it would be what these decks need. Any sort of Doomed Traveler would be nice too.

This one started as a way to utilize both the Cleric and Human synergies but I ended up leaning on Humans entirely. Anyway, who doesn’t love an underpowered disruptive aggro deck?

Our manabase is solid, we have a good mana curve, plus we have the correct suite of interaction. Sweepers don’t seem to be what people are interested in casting at the moment, so this could work. My only concern is the lack of evasion against big green creatures. If they’re able to slow us down enough, our clock might be worthless.

Between Demonic Embrace, Heraldic Banner, Glorious Anthem, and Maul of the Skyclaves, we have plenty of ways to pump our creatures aside from General Kudro of Drannith. I settled on Maul, which does seem like the strongest option, but I could see anything in that slot. Flying is the main selling point and I prefer the Equipment to the Aura.

Instead of being strictly aggressive, we could lean on a light reanimation package with Archfiend’s Vessel and Acquisitions Expert. If it turns out that strict aggression doesn’t get the job done, maybe some additional attrition would help.

Clerics didn’t quite come together as well as Rogues did but there’s still plenty to work with here. I had Orah on my Top 10 list for Zendikar Rising and maybe that will still come to fruition. Of these, I’m the biggest fan of Mono-Black Sacrifice but Orah is still a strong card with a ton of powerful synergies surrounding it. Maybe we just need one more set to work with.