One of the things that was a hard choice for me this Magic season was whether or not to head to the Season Two Invitational.

Just before Belgium, I had a long conversation with Patrick Sullivan about wanting to give some more attention to my Magic game. One of the things that I love about the Open Series circuit is that there is a constant attention to Standard. If we think about the development of decks on the Open Series circuit, there is a lot of credit (some say ‘blame’) to be given to it for making some of the most potent decks into razor-sharp weapons. When I think about Caw-Blade, for example, I can’t imagine the deck would be nearly as well-formed as it ended up being were it not for the Open Series. The same thing is true, I think, of Mono-Black Devotion more recently.

The time I spent developing my version of U/W Control came out of a time of both PTQs and the Open Series; I think my success with the deck really was reliant on the time I spent honing the deck in both circuits, and my games in the SCG events. In my conversation with him, Patrick was the incredible, awesome guy you’d expect, and encouraged me to pursue more Magic, including the SCG events, with a lot of vim and vigor.

So, the Season Two Invitational was on my calendar, but, of course, things happen.

One of those things was that I had enough Pro Points to really try to reach for the stars and try to pursue achieving Platinum in the Pro Players Club. I’m still a ways off of that goal, but hitting as many Grand Prix as possible is an important way to go about achieving it.

This last week, I hit Las Vegas, and it felt like Wisconsin hit the event like a sledgehammer. The crew in Madison had put a ton of work into Modern Master 2015, and I knew that, walking into the event, it was entirely possible that any of us could win the event. We got 1st and 2nd at one of the two Las Vegas Grand Prix, 2nd at the other, and won one of the two Super Sunday Series events. I, on the other hand, finished at 6-3. It was well below where I was hoping, but that’s the way the cookie crumbled. The pool I opened was probably in the bottom 10% of sealed pools I’ve seen in the format, and one of the realities of Magic is that no matter how prepared you are, Magic will reward you over time, but not necessarily specifically at one event. Things can go wrong. That’s just how it goes…

After the Grand Prix, rather than head to Columbus for the Season Two Invitational, the plan was to stay in town for the week for another major event and try to get in whatever practice I could when I was able. Aside from the Standard events of the weekend following Grand Prix Vegas, there was Grand Prix Charlotte and Modern to consider.

Craig Wescoe, philosopher and scholar extraordinaire, had gathered a number of people in a condo in Vegas to do some work on Standard for the following weekend. I’ve popped in a few times, alternately beating and being beaten by Lauren Nolen, Brandon Nelson, Caleb Durward, and others.

The deck I’ve played the most is U/B Control, of course, with numerous iterations from my PT deck.

At this point, I’m still trying to nail this deck down. There are just a wild amount of ways to build it. One of the great strengths of the deck is that you can aim its guns at any deck and basically obliterate it. Unfortunately, it isn’t the kind of deck that can be built to just take on all comers.

There are just a large number of ways you can go with this deck, and they all have their merits based on the metagame.

If you’re thinking about playing this deck and you haven’t already extensively playtested with it, I have a piece of advice for you: don’t. This deck is very powerful, but it is also not very forgiving. Even in the good matchups, this deck can win, and win quite often – but it often wins only just barely. So if you’re hungry for some wins at the Season Two Invitational, unless you’ve put in the work I’d recommend another deck for would-be control players:

I love Dragonlord Ojutai. I love it so much, in fact, that I keep contemplating what I’d have to do to make this card work in Modern (if that is even possible). For the would-be Esper Dragons player, one of the things that you get is the complete salvation offered by lines of play that begin with Dragonlord Ojutai and end up with some avalanche of cards that just bury your opponent. I’ve strung together chains of Crux of Fate into Foul-Tongue Invocation and Silumgar’s Scorn, ending up quite comfortably in control.

This deck used to have the world’s largest target painted on it. It still has somewhat of a target on it, but I think people are starting to focus elsewhere. Maybe this will spell good fortune for the deck, or maybe, as it did in Worcester, it will be just below the surface of the top decks.

The winning deck, John McCarthy’s copy of Abzan Aggro, is right up my alley.

I like my versions of Abzan Aggro to just max out on the cheap creatures, with 4 Warden of the First Tree, 4 Fleecemane Lion, and 4 Rakshasa Deathdealer. Personally, I haven’t been all that hot on Thoughtseize in any of these decks, preferring to think of them as closer to Red Aggro lists than Junk-style Midrange Aggro lists. I know that technically this Abzan Aggro actually is a true Junk list, but I’ve often found the discard side to be not all that compelling when there is so much redundant removal from the opponents where you’d think you’d want it.

That’s just my gut feeling, though. In all of my testing, the versions with Thoughtseize have certainly done better, but I still feel like something isn’t quite correct, though I can’t put my finger fully on it.

In a similar vein, I’ve had a lot of success with Valorous Stance and Tasigur, the Golden Fang in this archetype; I’d love to see one Tasigur in the maindeck and a second Stance in the sideboard. Perhaps if Ojutai truly is less commonly seen, those Self-Inflicted Wound can find a new home in your binder?

Ultimately, though, the Grand Prix is where most of my interest is.

Charlotte is less than two weeks away. I’ve been mostly playtesting Obliterator Rock, but, as has often been the case for me in Modern, I’m a bit unhappy, and nothing has just knocked my socks off and demanded that I play it.

A part of the problem with Obliterator Rock is that there are more than a few matchups that feel like they require absurd amounts of luck to win. The Tron matchup isn’t good, Scapeshift is horrible, and many varieties of U/W (whether Jeskai, Esper, or other builds) feel like they are so close to 50/50, but also a soft 50/50, where the unforgiving factor I was describing in the U/B Control deck in Standard sneaks into the coin flip, such that it takes optimal play just to get to that coin flip. Not fun.

The most popular and successful of the many Rock-like Midrange decks has to currently be Jund. Check out this recent build:

This deck certainly still has a Jund problem, and no amount of Fulminator Mage-style cards seem to help. The solution might just be to go all the way and really wreck those lands. 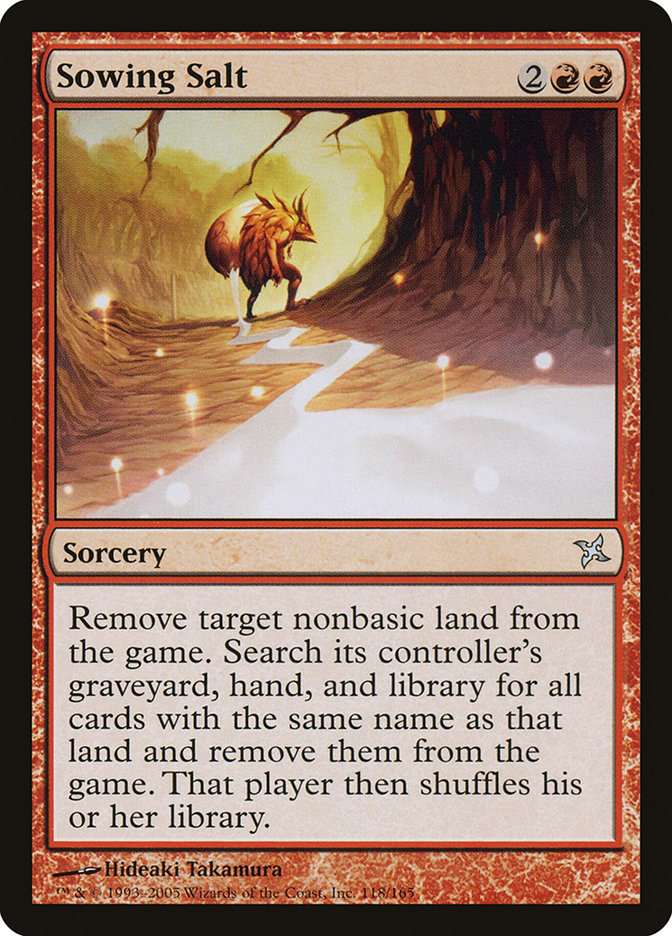 If Tron happens to go to ground for Grand Prix Charlotte, some deck like this seems incredible right now. The deck has a ton of cards that are just awesome, and can basically pick apart all but a handful of decks (most of which are characterized by their access to huge mana and big plays). The combination of potent creatures, removal, and awesome discard has been a winning one for basically twenty years, and that hasn’t changed now.

One of the things that I found inspiring about this list was seeing Kolaghan’s Command and Olivia Voldaren in the same 75. Altogether, this inspired me to put together this little brew:

This deck is obviously a fun brew, but it is actually quite good at making use of Waste Not. Burning Inquiry + Waste Not is clearly an amazing combo, but, in addition, Funeral Charm and Kolaghan’s Command are great with the card, creating near lock-out moments.

I know the deck needs a lot of work, but I’m kind of looking for anything right now when it comes to Charlotte, and so I’m doing a lot of brewing. Heck, this deck has been winning for me a fair amount, so maybe there is something here. It’s far more likely that I’ll end up playing something much more conventional, but I don’t mind the idea of tearing people up with Waste Not.

So far, the deck that has me the most excited is this next little number, complete with the following slightly mind-blowing semi-combo: 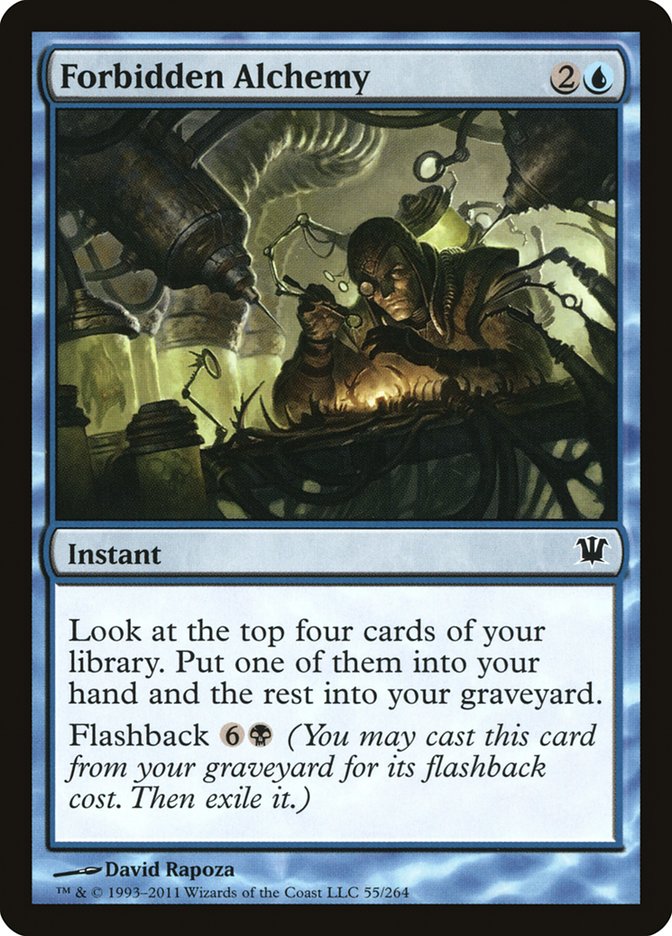 MatBlues87 went 4-0 with this in the June 2nd Modern Daily:

This deck is just very exciting to me. I’ve been looking for a home for Tasigur for a little while now, and this seems like it could be it. Tasigur is just such an impressive creature, anything that lets you take advantage of him is just incredibly exciting. While the deck also includes some cards that I absolutely hate (I’m looking at you, Think Twice), large parts of the rest of the deck just seem exciting to me.

Hell, it even has that Sowing Salt I mentioned earlier. Take that, Tron.

For the next few days, I’ll be trying to get in as much Magic prep as possible before my two events. I’m pretty happy with my fallback decks that I’ve had for the last few events, but I’m always looking at decks by the handful, new and old alike. As for you, whether it is Modern or Standard, whether with a brew or something established, I wish you luck in any events you have coming up.

And if you’ve secretly broken a format, I won’t mind if you tell me.