In an article about Legacy Burn a few years back, I jokingly mentioned that if anyone wanted a thorough breakdown on how to sequence the spells in the deck I would put it together. I never got around to writing it, but the concept has been in the back of my head for a while. Not just about Legacy, but about playing decks like Burn in all formats against counterspells.

In many matchups (combo or creature decks), sequencing isn’t the most important thing. You care primarily about mana efficiency, and a lot of those matchups play themselves. However, the matchups involving permission are entirely different. In those matchups, the counters in your opponent’s deck can be either atrocious or their best cards, and you have a lot of control over how that plays out. Doing this well is a challenge and is in my opinion the most common mistake aggressive red players make.

The specifics are different from format to format, but the goal remains the same: to make opposing counterspells as inefficient as possible. The games often have a similar start—we play some stuff, it gets answered, and the game shifts into "try to burn out" mode. It is in these moments where playing proficiently against counters is the difference between winning and losing. The goal is to maximize inefficiency, either by bottlenecking and then overwhelming opposing resources or by invalidating soft/time sensitive counters. Each format has different heavily played counters, and each format has its own texture because of this.

What counters are you likely to see in each format? In Standard, I would list these as the most likely you’ll see in game 1:

In Modern, I would probably go with:

And last but not least, Legacy:

Now, I’m not saying these are the only counters in the format, just that these are the ones in the greatest game 1 rotation. Again, it’s worth noting the specifics. Because Legacy is so fast, the counters have to be up and ready starting on turn 1, but it also means that the format is full of soft permission that can be invalidated if the game goes on for long enough. Standard’s counters are a lot slower but much sturdier (relative to the speed and power of their respective formats), so more of the game revolves around making mana inefficient rather than outlasting the counters (since they can’t be outlasted). Modern is somewhere in between Legacy and Standard and also occupies the middle ground of "speed vs. durability" of the counters.

So far I’ve mentioned making mana inefficient. What do I mean by that? It means forcing your opponent to spend turns not using their mana, as playing draw-go actually favors the Burn player in many spots even though that’s counterintuitive. Why would this be the case?

It’s not hard to conceptualize this. The Burn player sits around drawing Lava Spikes and Bump in the Nights while the control player draws Mana Leaks and Cryptic Commands, and the Burn player can overwhelm those relatively expensive defensive measures once they build up a hand of sufficient quality. It’s also easy to understand why we want to overwhelm mana—how bad is it for us to cast a spell into the jaws of a Cryptic Command if there’s a second one in their hand and we aren’t trying to kill them that turn?  So if this is the general way we want to approach the game, what are the common ways this can get tripped up?

So what are our guiding principles for play?

3) If your opponent has a big threat with which to win the game, try to make sure that you don’t leave yourself in a position where you don’t have enough mana over two turns (theirs and then your own) to cast everything in your hand. This means it’s possible you need to periodically play into counters to avoid being bottlenecked yourself when the big fight happens. This is also why decks that can win at instant speed or immediately (Sphinx’s Revelation being the most obvious example) are so much worse for Burn decks than decks that have to win with something like Baneslayer Angel or Batterskull—it equates to an entire turn’s worth of mana, and the threat of those kinds of cards often forces you to play into potential counterspells.

4) Be very careful about allowing opponents to "curve into" their counters, especially early in the game. Counters with a very short shelf life (Mana Tithe) or counters that generate value for the caster (Remand) are quite bad to allow your opponent to use efficiently, and Snapcaster Mage is another big reason to not allow your opponents to cast spells early and often.

Some practical examples may illuminate. Against opponents fielding a lot of soft cheap counters, it’s often about invalidating their counters altogether (with your mana-heavy draws) For example, imagine a RUG Delver player who leads off with Tropical Island and Ponder. After drawing our eighth card, we look at a hand of:

Now, we aren’t under any pressure to begin with, and our opponent can’t kill us until the fourth turn at the earliest. So what’s the play here, Lava Spike or suspend Rift Bolt?  Actually, it’s neither. My play here would simply be to play a Mountain and pass. Why is that?

My play would be to drop a Mountain and say go, with the intent of either Lava Spikeing / suspending one Rift Bolt the following turn (if they tap out) or suspending both Rift Bolts on the second turn (if they do not tap out). This means it requires a Pierce and Daze to counter anything that we do, which is a much better world for us than trading one for one with either of those cards.

What happens if one of the Mountains in our hand becomes a Sulfuric Vortex? This would be the tipping point for me to be willing to Lava Spike on the first turn. Since Daze is likely to have a longer shelf life against us (we have a three-mana spell), we should be willing to offer up our Spike for it (and there’s a good chance they won’t Daze there even when they have it).

What happens with our original hand if their turn 1 Ponder is a Nimble Mongoose instead? This would also be enough to compel me to Lava Spike on the first turn. Remember that it’s not just about what’s in our hand right now but future draw steps as well. While it’s nice to play around Daze and Pierce to the maximum, it’s far worse to die with spells in our hand that we didn’t have time to deploy. Since we’re under some amount of pressure, we don’t have the luxury of taking as much time as we want here, and this still sets us up for a second turn of "suspend two Rift Bolts" and play around Daze and Pierce for the rest of the game. Since the Daze play is borderline even if they have it (which they won’t a good amount of the time), just this little nudge is enough for me to change my line of play.

The interesting takeaway here is the difference between the first and third examples. Even though Ponder and Nimble Mongoose look fairly similar on the surface ("very little is happening"), the implication on how much time I have causes me to play differently, and my tolerance for playing around soft counters is different as well.

How about bottlenecking mana? This comes up a lot more against hard "chunkier" permission. Consider this scenario in Standard. 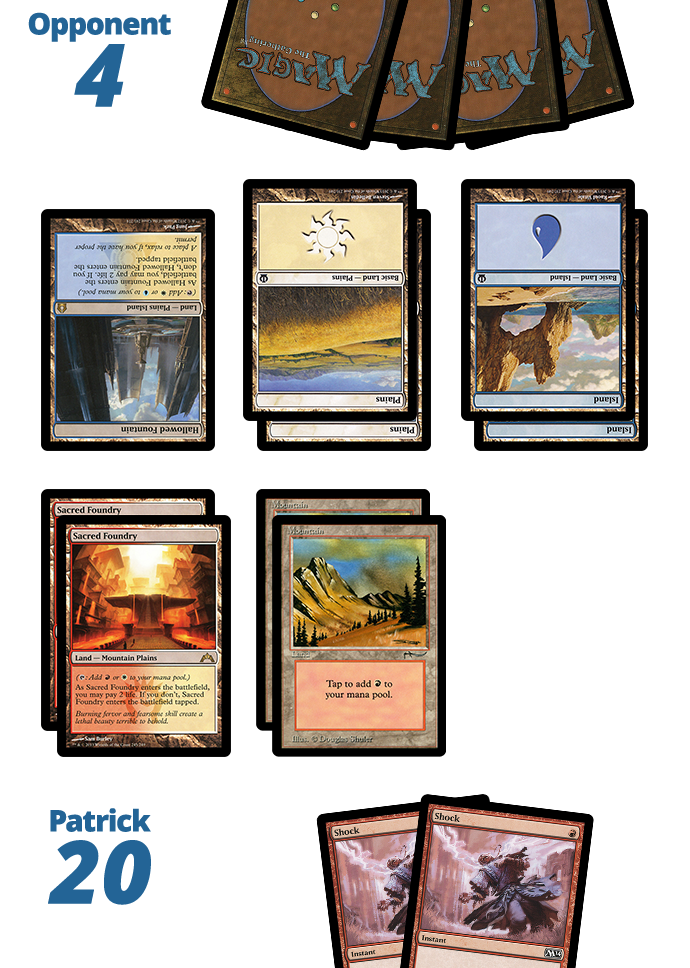 This is a very basic example of trying to bottleneck your opponent on mana. Many low to medium skill players would have an instinct of just going for it here, but that would be wrong, as there’s no rush. Your opponent can’t do anything threatening (like resolve a big Revelation), and running your spells into their counters would be a disaster. Just wait. If they ever tap out/low for something, you can kill them in response, and you have plenty of draw steps to improve your hand.

What happens if you then draw a fifth land? Now we’re starting to get some incentives to go for it. If our Shock resolves, we have two lethal instants in our hand. However, it is still often correct to sit back, especially if your opponent is missing land drops. We still aren’t out of the woods yet in terms of playing around two counters, so give it some more time. You might improve your hand even further (for example, Lightning Strike would allow you to play two Shocks / Lightning Strikes end of turn with Helix on your own turn, which they almost certainly can’t beat), and if your opponent happens to cast something like Jace, Architect of Thought or Elspeth, Sun’s Champion, then your work is done for you.

Still, that doesn’t mean it’s correct to be sitting on our hands the whole time. Imagine this scenario: 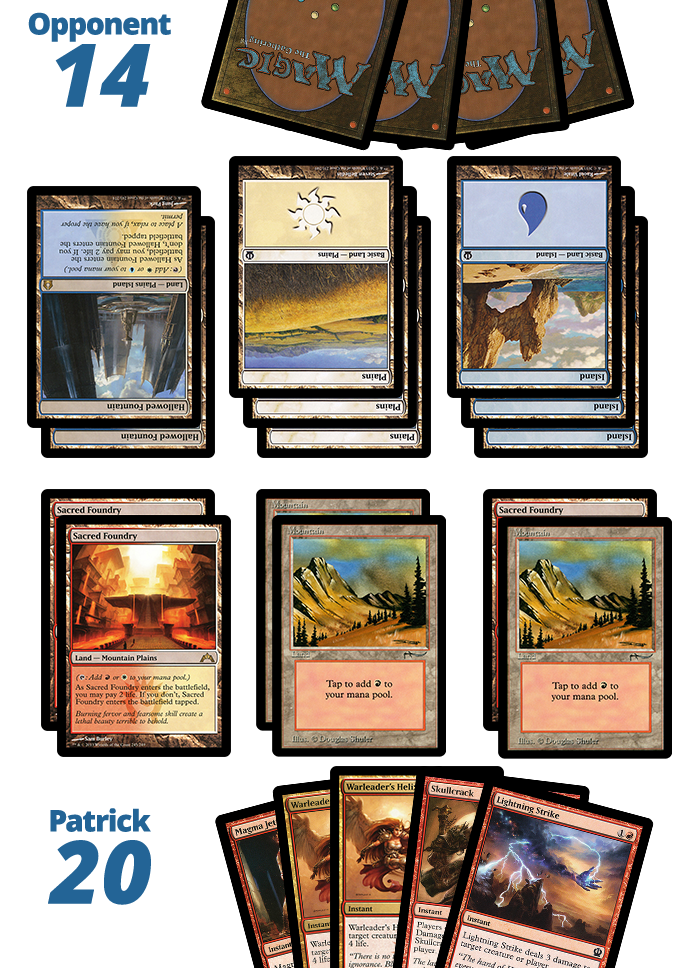 This is just a hypothetical board, but here we probably messed this game up. We don’t have enough mana to play everything over the course of two turns, and Revelations + counter backup is something we need to start worrying about as well. Earlier I talked about how your draw steps are better than your control opponent’s draws when you’re playing a waiting game. This is a good example of when that’s not the case. Your draws aren’t better currently because you lack sufficient mana to capitalize on them. Conversely, your opponent’s draws have huge value, as every counter can be deployed and every additional mana gives them tremendous value (for Revelation, Syncopate, planeswalker with counter backup, etc.).

So what spells do we lead with here? The game I showed you is probably too far gone to matter if your opponent has any reasonable hand, but the formula for bleeding out opponents when you need to casting something is:

All of these situations and hypotheticals are subject to change based on the specific cards in each player’s hand, but at their core you should be thinking "how much time do I have?" If it’s a lot, be patient and choke your opponent on mana or outlast their soft stuff. If you don’t feel like you have a lot, be more aggressive and make sure that the game doesn’t end with you holding a bunch of stuff in hand that could have been cast over several turns.

If I had to summarize playing burn spells against counters in a sentence, it would be "your opponent’s counters have a mana cost and a text box—find a way to make at least one of those things bad." By using these core principles and getting more experience, I expect any fledgling Burn player to generate a much higher win percentage against opponents with various counterspells in their deck across every Constructed format.