A subgoal of this deck is to create huge Lotleth Trolls that the opponent can’t deal with by bestowing creatures on it. Admittedly, this list is mostly to stress test the mana and try out Chromanticore. I’m working extremely hard to cast it, which might seem unreasonable for a deck that only has three copies of the card to get paid off by. But Grisly Salvage helps find the card when I need it, and I’m basically just curious to see how easy it is to cast when you have Deathrite Shaman and Sylvan Caryatid along with Satyr Wayfinder and Grisly Salvage to find lands to cast it.

My guess is that the deck can get the mana together but that the payoff isn’t quite high enough, the off-color shock lands should be replaced with basics, and Chromanticore should become Herald of Torment, which works similarly while also being a cheaper way to give a large Nemesis of Mortals or Nighthowler evasion. 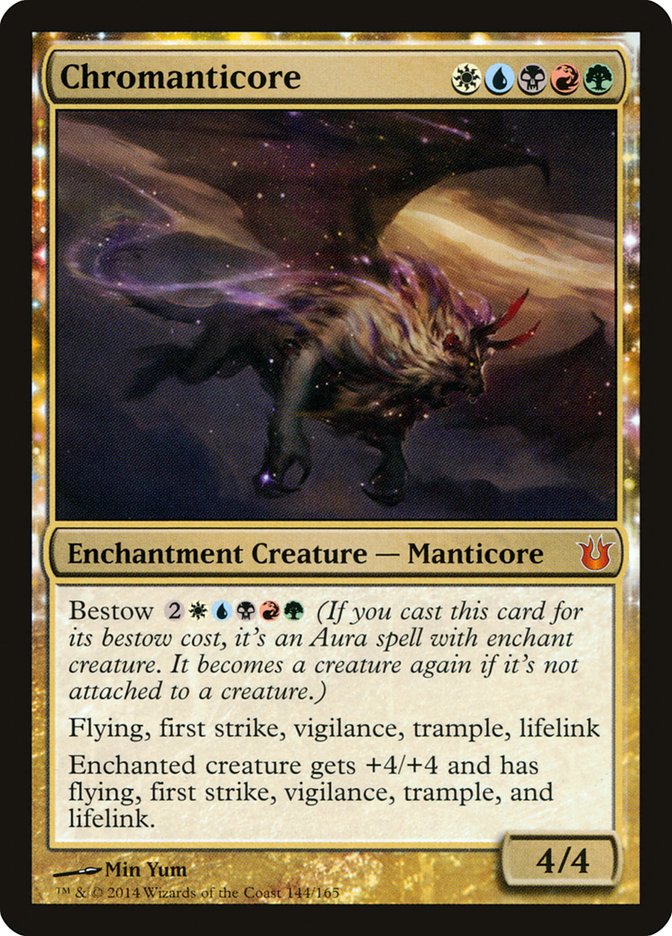 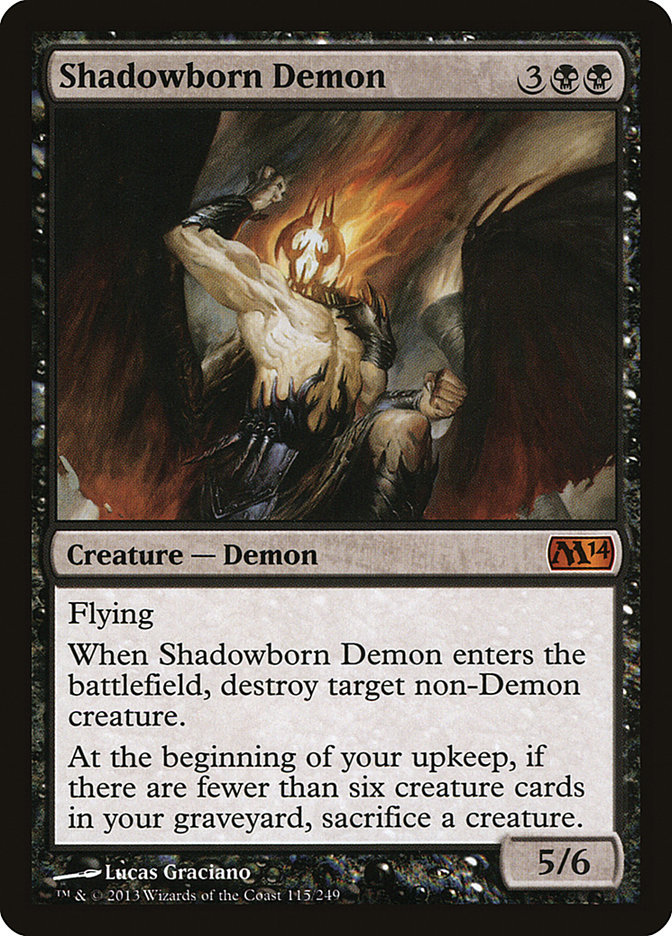 Shadowborn Demon is one of the big rewards for this strategy. It’s an outstanding creature when you have six creatures in your graveyard, and even when you don’t, sacrificing a mana dork that you don’t need anymore that powers up your Nighthowlers might not be a bad thing.

Ordinarily a problem with a deck that’s basically all creatures is that it’s vulnerable to sweepers, but bestow and Lotleth Troll both help mitigate that. Another card to consider for the sideboard is Varolz, the Scar-Striped, who I didn’t include in the maindeck because I generally want to keep my creatures in the graveyard but serves as another good way to fight sweepers and will take advantage of the milling in his own way.

Chromanticore is nice because it makes you much less reliant on the graveyard than you would otherwise be if all the big threats counted on the graveyard. While you’re powering out Nemesis of Mortals and Nighthowlers, you’re incidentally finding mana for Chromanticore, which can easily win a game on its own if your opponent plays something like Rest in Peace. Herald of Torment offers a similar effect as mentioned, but it’s considerably less powerful.

Courser of Kruphix is basically just included because it’s a good card that I want to try out in more places, and the Grisly Salvages and Satyr Wayfinders incidentally help it by refreshing the top of your deck if you’re looking for a land to play off the top.

Constructing the sideboard was tricky because I wanted to keep the creature density up after sideboarding (you could plan to sideboard out the cards that care and then bring in any number of noncreature spells, but three Shadowborn Demons, four Nighthowlers, and three Nemesis of Mortals is a fairly but not impossibly large number of cards to cut). I opted for Courser of Kruphix to fight aggro and Herald of Torment to fight midrange and control along with a mix of removal spells for various matchups.

Doom Blade is mostly to answer Scavenging Ooze. Dark Betrayal is a great card against Mono-Black Devotion, but it’s specifically important for killing Demons like Desecration Demon that Shadowborn Demon can’t kill. Golgari Charm answers Supreme Verdict, Detention Sphere, Rest in Peace and also has the ability to kill things like Master of Waves or sweep a red aggro board.

I’ve generally found Whip of Erebos to be a little too slow in the maindeck, but it’s so powerful with what the deck is doing that I have to imagine there will be a lot of spots where you’ll want access to it.

The next deck I’m thinking about is a different take on trying out Chromanticore and again attempts to push the power of the bestow mechanic:

I have mixed feelings on Karametra’s Favor and Nylea’s Presence. Karametra’s Favor is awesome with Hero of Iroas and Meletis Astronomer and acceptable as a turn 2 play following a turn 1 Hopeful Eidolon, and both are great ways to power up Eidolon of Countless Battles. But I’m worried that they may be too slow for Constructed. Hero of Iroas helps, but it might just not be enough.

On the other hand, they’re likely necessary for casting Chromanticore in this deck, and being able to dig for Chromanticore with Meletis Astronomer might be sufficiently powerful to make up for the lost time.

With 25 enchantments, Ethereal Armor will be outstanding, especially since several of them are cantrips and Meletis Astronomer finds extras. Ethereal Armor on Hero of Iroas, Meletis Astronomer, or Hopeful Eidolon will always be extremely powerful on turns 2-4, and Eidolon of Countless Battles should consistently be huge. Thanks to Nylea’s Presence and Detention Sphere, even after a Supreme Verdict a bestowed Eidolon of Countless Battles will often be a reasonable size after it falls off. 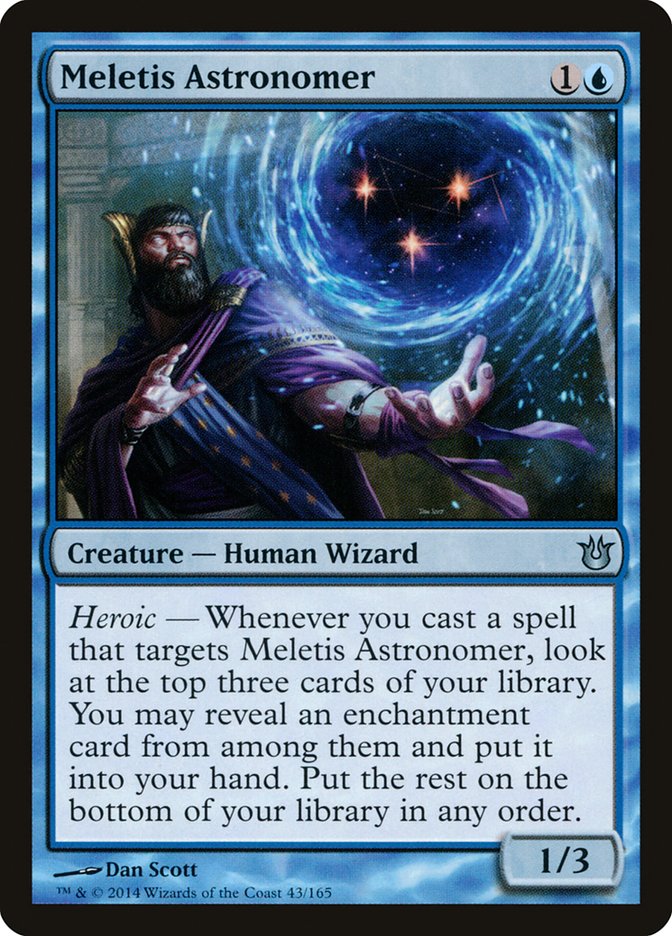 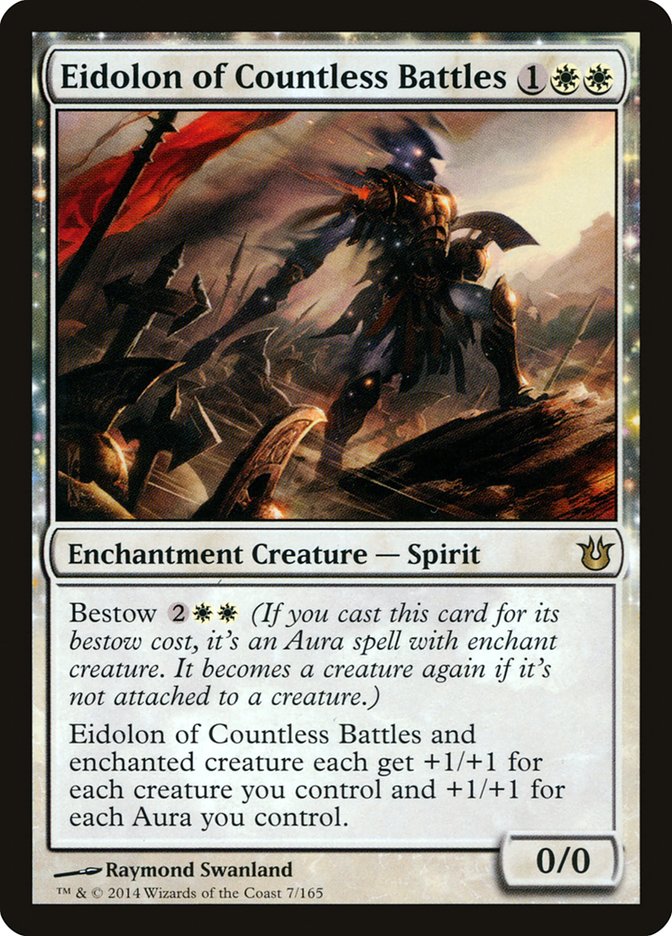 Sylvan Caryatid is somewhat out of place in this deck since you have other things you want to do on turn 2 and you’re not really trying to ramp out your four-mana plays if all you have is a Sylvan Caryatid in play. I’ve included it because I think it’s required to cast Chromanticore and it’s not bad to play it on turn 2 and wait to play one of the heroes until you can cast enchantments in the same turn.

One of the biggest strengths of this deck could turn out to be the sideboard, especially the Domestications. Against a deck like Mono-Blue Devotion, which has very few ways to remove Meletis Astronomer, digging for a string of Detention Spheres, Pacifisms, and Domestications can be extremely powerful.

Gods Willing has been a staple of all of my heroic decks. I still believe it would be good here against decks with removal, but I like the density of enchantments and focus on the plan with the maindeck as is. Gods Willing takes space from something that can otherwise be found by Meletis Astronomer and power up Ethereal Armor and Eidolon of Countless Battles. If the opponent has enough removal that it’s reliably going to end up keeping something that’s doing that in play, it will be great, but I don’t want to draw it against other opponents.

Glare of Heresy is just so good at what it does that I felt like I should include it because I can cast it, but it’s possible and even potentially likely that Detention Sphere is so much better as an answer in this deck that it should be something else. Brimaz, King of Oreskos is an obvious option, as making Cats plays well with Eidolon of Countless Battles, but another great option is Ephara, God of the Polis, which keeps the enchantment count up for all the things that care about that and works well in the deck otherwise, which has plenty of creatures to play to trigger it and will be pretty good at generating the devotion to turn it into a creature. In fact, I’d be pretty tempted to try Ephara in the maindeck.

What I’d really like is to find some way to get Deathrite Shaman, Satyr Wayfinder, and something like Karametra’s Favor or Springleaf Drum to take advantage of the body of Satyr Wayfinder. That points toward trying to use Pain Seer, which also works well with Springleaf Drum and Karametra’s Favor. Having that many things that tap for any color of mana of course means I’d like to take advantage of Chromanticore, but I think it’s better to just keep the mana clean. Maybe something like this:

Prophet of Kruphix is awesome with inspired, especially if you can get multiple Springleaf Drums in play since it doesn’t untap those. Siren of the Silent Song might be a little weak, but it’s pretty good if you can tap it with Springleaf Drum the turn it comes into play and is a very serious threat against control even without it.

This deck is good at using Courser of Kruphix and Kiora the Crashing Wave—they’re great together, the fact that you can accelerate Kiora into play fairly consistently on turn 3 is awesome, and the density of blockers really helps. The Explores from Kiora help Courser of Kruphix (or maybe it’s the other way around), and the life gain from Courser helps offset the life loss from Pain Seer. 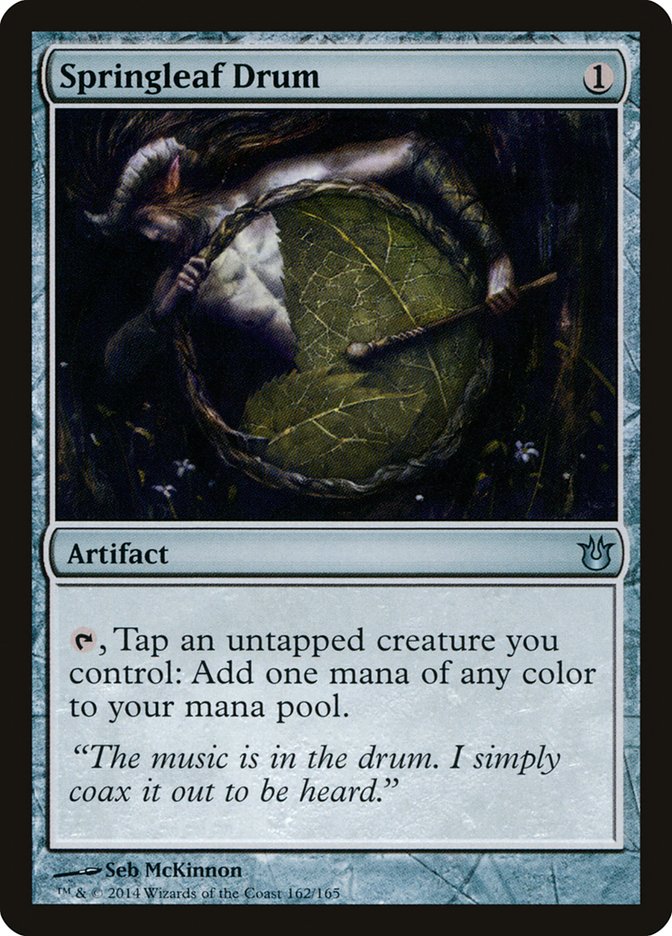 This deck won’t put many lands in the graveyard. But Deathrite Shaman is still a one-mana creature to use Springleaf Drum, and the other abilities are always going to be good.

It might want some copies of Herald of Torment because bestow is great with Prophet of Kruphix since it can be used as a combat trick. It also helps deal with the weakness of Siren of the Silent Song against Nightveil Specter in that it’s a creature that has a favorable matchup against Nightveil Specter and bestowing Pain Seer is a good way to get to attack with it to get the inspired trigger.

I really like each of these decks, but I don’t know that any of them is ready to compete with the established decks in Standard. Still, I think there’s something to be found with bestow; we just need to find the right shell.