Hey ya’ll! Sorry about missing Ben’s Corner last week – I was out of the office and was unable to post. That problem’s been fixed, and Ben’s Corner is back! Let me catch you up on the last
couple of week’s worth of SCG.com cards and specials.

As you may have noticed, we’ve gotten a ton of KMC Holographic Sleeves and we’re blowing them out
at ridiculously cheap prices. These sleeves might not be tournament legal in your area as they are somewhat reflective, but they are perfect for sleeving up collections, playtesting, casual play,
or any other gameplay. KMC produces, in my opinion, the best quality sleeves on the market and these are as durable as the non-holographic counterparts. If you’re looking for a nice, cheap way
to sleeve up your collection, grab these before they sell out – KMC has had distribution problems to the US and KMC brand sleeves have been drying up on these shores recently.

Card of the week: Goblin King 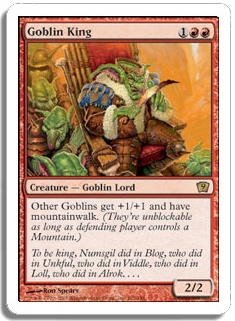 Goblin King, Elvish Champion and
Lord of the Undead were all updated in 9th Edition to be of the creature type they pump. While they don’t pump themselves (each says other), they are now much more valuable as key components of tribal decks. Elvish Champion can feed cards like Wellwisher and Timberwatch Elf. Goblin King is the most improved of these three. In previous constructed seasons, Goblin King was a card used as sideboard tech in the Goblins on Red matchup. However, this strategy will gain in popularity as Goblin King now benefits the deck directly via tutoring and card advantage effects – namely Goblin Matron and Goblin Ringleader. While Goblin King was sideboard tech in the past, it is now viable as a maindeck compliment to any Goblin deck – it pumps Goblin Piledriver on the attack, it gains haste from Goblin Warchief, and it can be powered out with Goblin Lackey. Grab yours today before Extended season starts, because with the banning of Aether Vial the Goblins deck looks to be the early deck to beat in the format.

Special Card of the Week note: Remember, when a card is given errata, all versions of that card play as if it had that errata. This means that every version of Goblin King (Alpha, Beta, Unlimited, Revised, 4th, 5th, 6th, 7th, 8th, and boxed set) play as if they are creature type Goblin, even though the 9th version is the only version which explicitly has Goblin as a creature type on the card. A Revised Goblin King will fuction the same as a 9th Edition Goblin King.

A month ago I called Ravnica the set with one of the all time highest expectations in Magic history. Many interpreted this as overselling the set, but I promise you that it was not. First we got the concept of split mana costs on cards. Then we had bleed cards, and then the new dual lands. More recently spoiled cards (courtesy, as always of www.Mtgsalvation.com) have been just as impressive as the previously revealed cards. Take a look as a handful courtesy of MTGsalvation.com:

Hunted Dragon is a mighty creature with a mighty drawback. Each color has a creature in the Hunted cycle – the white creature is rumored to be a 5/5 flyer for four that gives the opponent a 4/4 black creature, and the green creature is purported to be an 8/4(!) regenerator which gives the opponent four 1/1 blue flyers. Either way, Hunted Dragon is larger than Rorix Bladewing, comes out a turn earlier, and has a drawback which is easily dealt with in-color (Pyroclasm/Jiwari anyone?). The Hunted cycle look to be quite powerful.

This card is Dark Banishing with Oxidize thrown in for G instead of a colorless mana. If you’re planning on playing The Rock this season, you need four of these immediately. This is one of the best removal spells ever printed, and comes prepackaged for a color which is already hurting from the loss of Diabolic Edict.

Inventory Update!
I added four thousand good 8th Edition singles, five hundred 8th Edition Foil cards and three thousand higher-end Alliances cards to the system yesterday. That’s just the tip of the iceberg. We’ve gotten in several major collections over the past week, and we are frantically trying to get the cards graded and sorted to enter into inventory! These cards should begin trickling into our inventory all day tommorrow, and will be entered throughout the following week. Here are some of the highlights:

3) In addition to these foil cards and sets, we have around three thousand higher end non-foil cards that will most likely be entered tommorrow. These include around 100 Revised dual lands, dozens of Force of Will, Survival of the Fittest, Umezawa’s Jitte, Kagemaro; First to Suffer, and other hot tournament staples. We will have virtually every playable Vintage, Extended, Legacy, Standard and Block card back in full stock by the start of the weekend.

4) For those higher end collectors, I will also be adding several power nine cards, a playset of Guru lands, the elusive Hypnotic Specter foil card, a playset of Mishra’s Workshops, and many other higher end cards.

This will be the largest inventory entering we’ve had in months (not counting new set releases) and it will clear dozens (if not hundreds) of alerts in our system. If you’re looking for a card that we’re currently sold out on, click the “notify me when this card is back in stock” button now, because all cards will be first come first served.

Join me back next week as I talk about the hottest selling cards for us out of 9th Edition, recap more from Ravnica courtesy of MTGsalvation.com, and shout out some news about the project to upload our thousands of rarities, foreign cards, and misprints to the website!