I hope those of you who wanted to got play in a Theros Prelease this past weekend. I have to admit that Sealed Deck is really the format I enjoy the least, but something about being the Prerelease and being the first time you get to play with these cards makes it a bit exciting for me.

I was pretty well booked for the weekend, but I did have a window of opportunity to sneak out to the midnight Prerelease Friday night. Due to some car troubles I was forced to roll with my backup vehicle, an ancient and decrepit van, but since the Prerelease was just ten minutes down the road, I didn’t feel too worried taking it there. 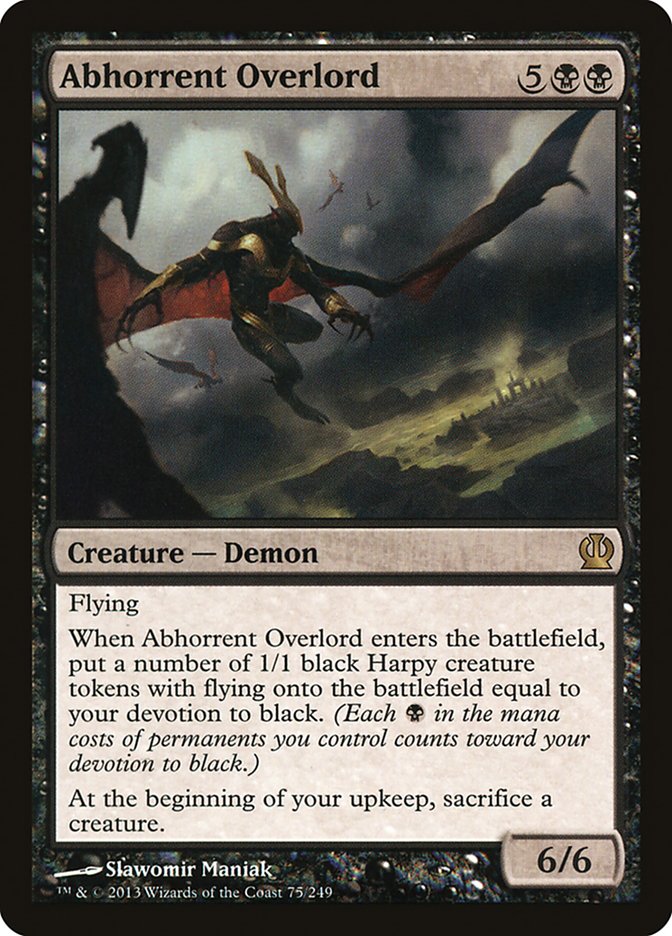 I’d preregistered for the event, but since I wasn’t a regular there, I was number eleven on the list to pick the Prerelease pack I wanted. I’d looked over all five colors and made my initial choice based on which of the Prerelease cards I could most see myself playing in a Commander deck. Abhorrent Overlord seemed to stand—or flap—head and shoulders above the rest, and luckily there was a black pack available to pick when it came my turn.

After opening the packs and sorting by color, I was pleased that the black looked pretty solid. Outside of the insane Prerelease rare, I had a Nighthowler, Keepsake Gorgon, two copies of Sip of Hemlock, and a Rescue from the Underworld. I was sad to see I had no copies of Gray Merchant of Asphodel, but I did have two Disciples of Phenax and a Nykthos, Shrine to Nyx along with the Overlord to tempt me into pushing dedication to black.

The black wasn’t deep enough to play all by itself, so I looked to some other colors to splash. Opaline Unicorn, Burnished Hart, and Temple to Mystery meant that I could possibly splash a few colors for bombs, but nothing looked too enticing to push me too far in that direction. I did open a Xenagos, the Reveler that was extremely tempting, but ultimately I decided trying to splash a red and green gold card in my black deck might be overly greedy.

The two copies of Fade Into Antiquity convinced me to splash green—that card is basically an Oblivion Ring in this format. Voyager Satyr provided a little extra mana ramp, I got some utility from Leafcrown Dryad’s bestow, and I tapped into some additional recursion with Pharika’s Mender. Here’s what I ended up playing:

Here are the cards I didn’t play:

I ended up winning the Prerelease, not losing any of my four matches to claim the top prize . . . though round 2 I may have gotten lucky when my opponent had to drop from the tournament due to work obligations early in the morning after he crushed me in game 1 but graciously conceded the match to me. That’s not to say I couldn’t have beaten him in the next two games, but his deck was pretty gross.

I played pretty well and had a solid deck, and thankfully my Prerelease bomb came out to play quite a few times to help put away the games. Even though I won the tournament, I doubt I built this pool a hundred percent correctly, so I’m definitely curious to hear any thoughts on how I might have built this better.

One thing I did notice about building this deck is that even if you’re leaning heavily one color to support its devotion, most cards don’t require more than two colored mana, so you can easily splash just a few cards from another color and put plenty of lands to support the splash without screwing up your primary color. For instance, I had a nine/seven split between black and green lands and ran fine with my mostly black deck.

Playing in the Theros Prerelease finally got me juiced to brew for the new Standard, but three things bug me going into it: the missing five scry lands, Thoughtseize, and Lifebane Zombie. Right now I would love to play G/W, adding Fleecemane Lion to the mix with such great cards as Voice of Resurgence; Scavenging Ooze; Loxodon Smiter; Advent of the Wurm; Trostani, Selesnya’s Voice; Archangel of Thune; and Kalonian Hydra. But Lifebane Zombie is going to be maindecked in every black deck, along with Thoughtseize, and between those two cards nuking your starting hand and your mana being strictly worse than those that can run eight quality dual lands, I just don’t see messing with Selesnya right now.

That’s not to say I’m staying away from green and white; I’m just not so sure about playing them together in a two-color deck quite yet.

So what new Theros cards are floating my boat? Glad you asked! 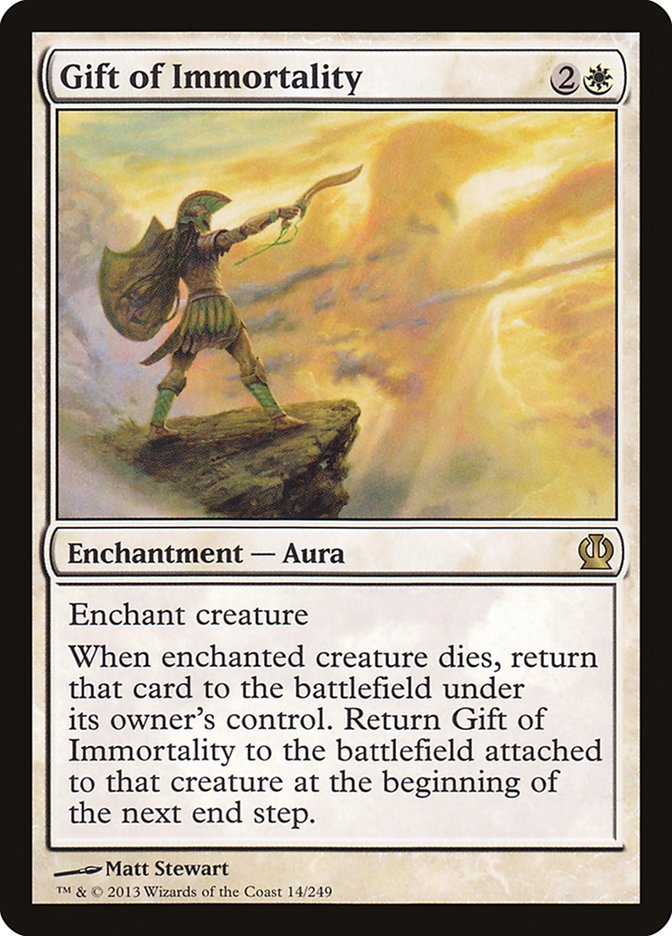 This card seems super cool to play . . . and super annoying to play against. Giving a value creature another shot at life is always enticing, and occasionally this card is going to let that creature keep coming back over and over if your opponent can’t kill it again during the brief window of opportunity before the Gift of Immortality follows the creature back from the graveyard.

Since I’m swearing off Selesnya and Boros isn’t my cup of tea, I turned my witches’ eye to Orzhov and cooked this up:

Slapping a Gift of Immortality on Gray Merchant of Asphodel with a Cartel Aristocrat in play seems like a pretty insane endgame to set up, but I’ve loaded up with plenty of other creatures that would love the Gift: High Priest of Penance, Xathrid Necromancer, Shadowborn Demon. Desecration Demon doesn’t really need any shenanigans and is a pretty big scary threat all on his own, and since I had the room, a couple copies of Erebos, God of the Dead seemed like a decent addition. Sin Collectors seem a fine start for the sideboard. 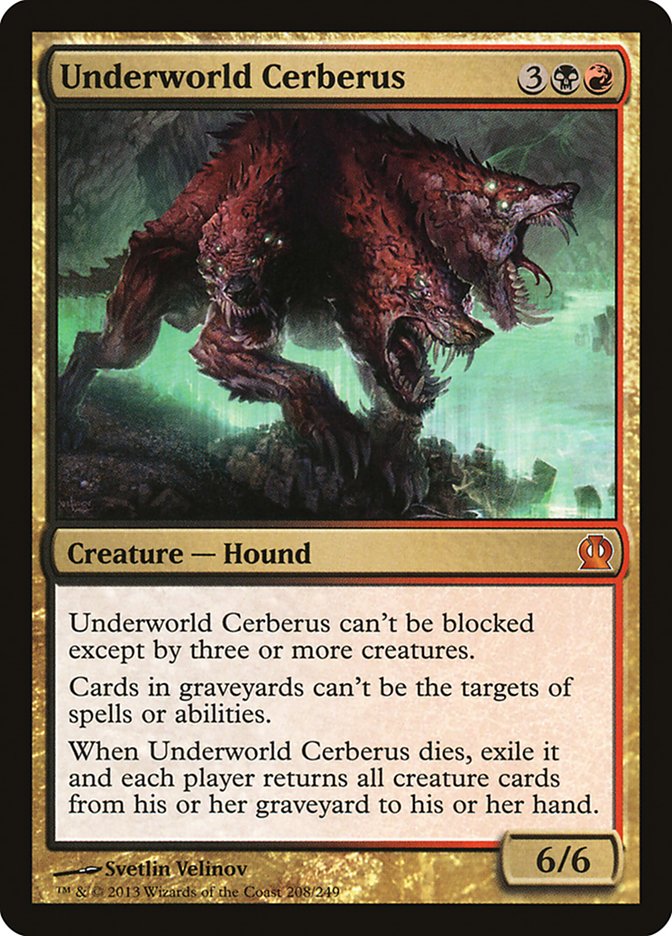 When I first saw this card, the first thing I thought to pair it with was Lotleth Troll—either your die to Underworld Cerberus or if you kill the Hound then you get back any dead creatures to play again or pitch to Lotleth Troll. Unfortunately, I haven’t fleshed out a Jund shell that I’m happy with to put those two cards in and might not be able to pull that off until we get the Temple of Rot or whatever the Golgari Temple might be called.

Then it occurred to me that Underworld Cerberus could let you recover from putting a ton of creatures in your graveyard. Nothing fills your graveyard quite as fast as a deck trying to do something around Shadowborn Apostles, right? Of course, now that Griselbrand is gone from Standard, there aren’t too many super scary Demons running around that you’d want to cheat into play that could just win the game on their own. However, the Apostles are Humans, and Xathrid Necromancer likes turning Humans into Zombies. Six 2/2s is much more threatening than six 1/1s.

I then ran across Ogre Slumlord in the card database and realized that it makes an okay backup to Xathrid Necromancer, so throw all those together in a deck with Underworld Cerberus and Shadowborn Demon and you get this strange-looking concoction:

I will get something competitive going with Underworld Cerberus, I swear I will . . . 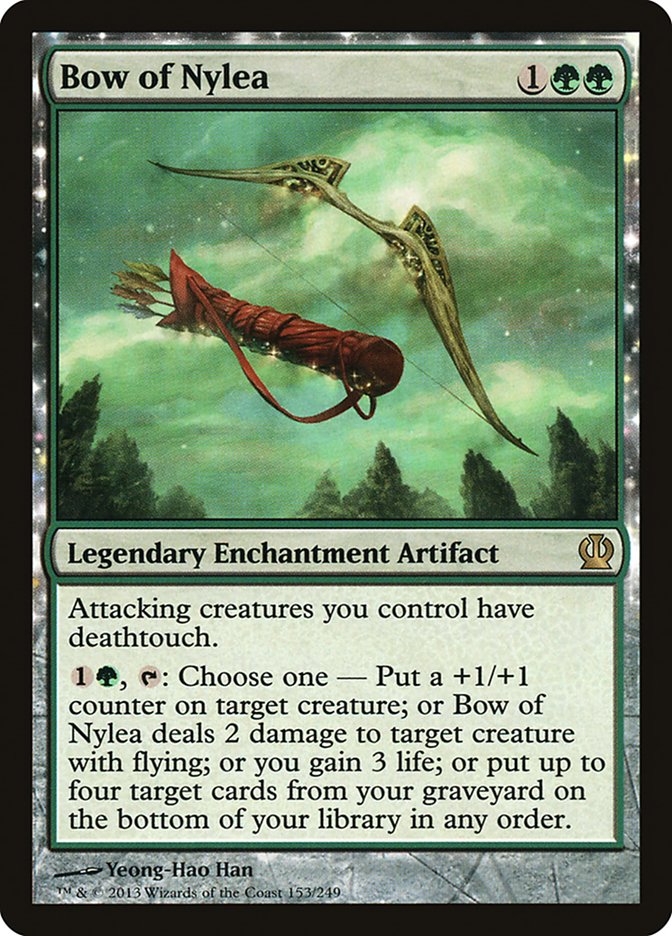 My favorite of the God weapons is Whip of Erebos, but I’m not entirely sure what the best way is to use that card yet or even if it’s going to fit in a tier 1 deck since it does cost so much mana. My second favorite is Bow of Nylea, in part because it’s like a mini-planeswalker with all these different things you can do with it while being tough to kill. I just wasn’t entirely sure what the best shell to put it in was.

Meanwhile, I’ve got a long-standing but steadily evolving decklist involving Bogbrew Witch that I like on one hand but don’t like the fact that you can potentially run out of things to search up and sacrifice. And I really don’t like the idea of having to run Elixir of Immortality to fix that problem.

Ratchet Bombs are left over from earlier versions that ran more artifacts and Trading Post, but I’m not entirely sure that they aren’t fine here to help deal with fast swarm decks that might otherwise overrun you if you don’t draw a few early Festering Newts. I also like the Ratchet Bombs to make sure that token creatures don’t slow down Desecration Demon too much. It’s possible I might want Gyre Sage instead of Ratchet Bomb.

There are lots of fun interactions here outside of the Bow providing an endless stream of Festering Newts. Throwing +1/+1 counters around helps get things going when Kalonian Hydra comes to play, and giving the Hydra deathtouch makes it an even more devastating attacker. 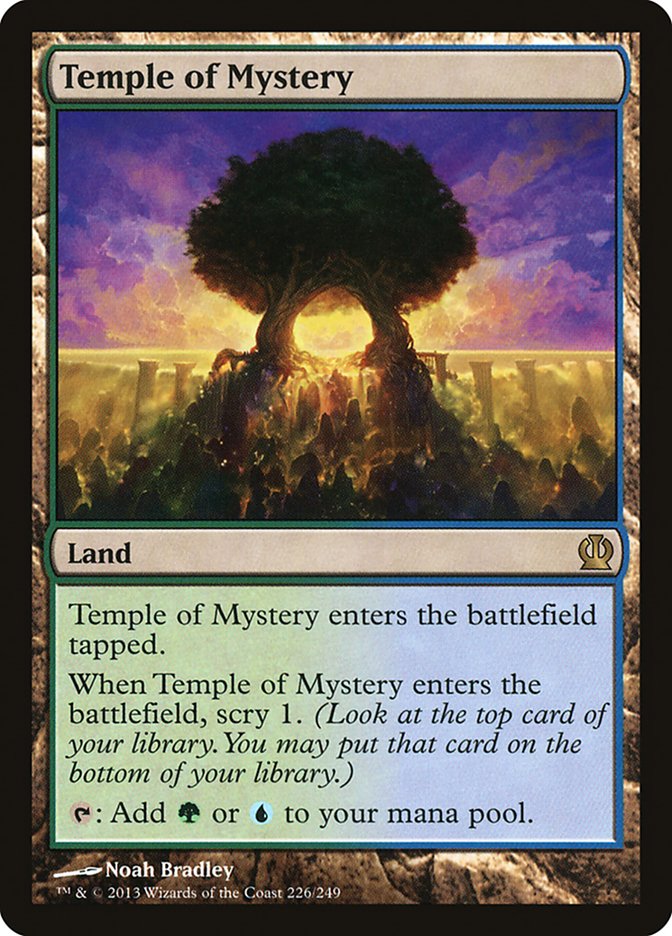 Simic is one of the five guilds that get the mana goods in the new rotation, so I’ve been sketching out some lists to see if I can cook up something good. Elvish Mystic, Sylvan Caryatid, and Gyre Sage provide the best mana acceleration in Standard, but what do we do with it? I’m still pretty stoked about Plasm Capture, and we’ve got some decent mana sinks available in Polukranos, World Eater, Aetherling, or an overloaded Cyclonic Rift. I also think having the extra mana can let us take full advantage of the bestow and flash abilities on Boon Satyr—we can keep up mana to counterspell something, and if nothing worries us, we can boost an Elvish Mystic or Gyre Sage at the end of the turn to have a beefy attacker resilient to removal that we can then untap and protect with countermagic. Here’s what I’ve sketched out so far:

Prophet of Kruphix is a fantastic card in this sort of deck, but its abilities are redundant, so I figure one copy is fine to have in the mix.

So what do you think? What sort of tweaks would you recommend to these builds? What Theros cards are you excited to build with in the new Standard? Let me know in the comments!