With the holiday season in full swing, there is not a ton going on in the Magic scene over the course of the next few weeks, which leaves more time for fun casual Magic.

Today I am going to be focusing on Commander and will be sharing a couple of Commander decks I have been working on recently.

I have had “build a casual Commander deck” on my list of things to do for some time now, and with no major tournaments to prep for until after the new year, now seemed like the perfect time to turn this vision into a reality.

I was also inspired by an article I read earlier this month that asked “what would Commander decks have looked like in the early days of Magic?” I thought that this was a really interesting premise and immediately began designing my own “old school” Commander deck.

A friend of mine, Jon Johnson, was also intrigued by the premise of building an old-school Commander deck, and we set out to build decks and battle them against each other.

We agreed upon all cards from Alliances back being legal and also agreed that because of the small card pool there was no need for a banned list aside from ante cards like Contract from Below.

This means that all the old-school power cards are legal for play!

Here is the deck that I brewed up:

All in all, the deck was pretty sweet, and I had a ton of fun playing with many of my old favorite cards that I hadn’t gotten to cast in years!

The deck is very much a relic of an earlier day and is a very powerful nearly creatureless artifact-based control deck featuring a lot of permission and card advantage.

Actually playing games against Jon wound up being pretty comical.

He built a Gwendlyn Di Corci Grixis Control deck, and we went to battle against one another. After about two games, he said, “This is absolutely miserable!”  Each game was super long and grindy, and the things that were important in our old-school games were very different than the things that are important in modern Magic.

I have been playing since the beginning, and playing this format really brought back a lot of memories for me. I remember when creatures were unplayable and card advantage was the only thing that actually mattered in games. To be honest, I actually like playing this style of Magic quite a bit because it takes me back quite a few years; in the age of tempo racing, I much enjoyed the change of pace to a slow methodical battle of resources. 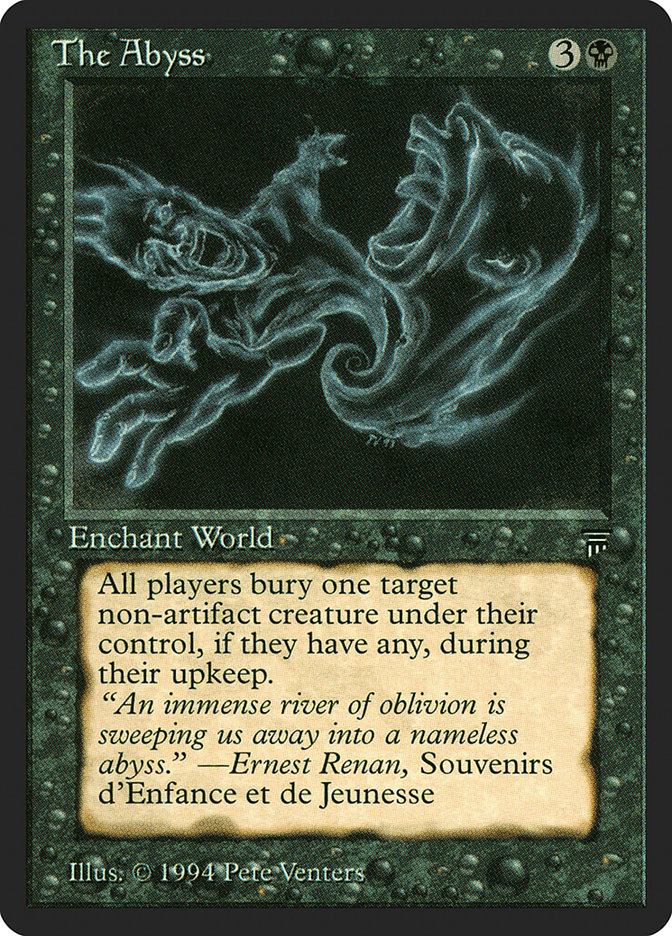 My deck has no answer to this card.

Since Jon’s deck had no way to actually destroy The Abyss and was based around attacking with creatures, he quickly learned the power of The Abyss.

The Abyss is one of those cards that was completely game defining back in the early days of Magic, and it was kind of cool to teach somebody the lesson of The Abyss nearly ten years after the card stopped being tournament playable.

Other notable things that I learned about this format:

1. Merieke Ri Berit should be banned as a general. Given the small card pool, she was simply a recurring removal spell that was way better than the other general options available.

2. Karakas should be banned. Karakas is banned in traditional Commander for good reason. It’s simply too good.

It was interesting that Ancestral Recall, Black Lotus, and the other power cards seemed perfectly fine within the frame of the other cards but the two that were actually obnoxious were Karakas and Merieke! 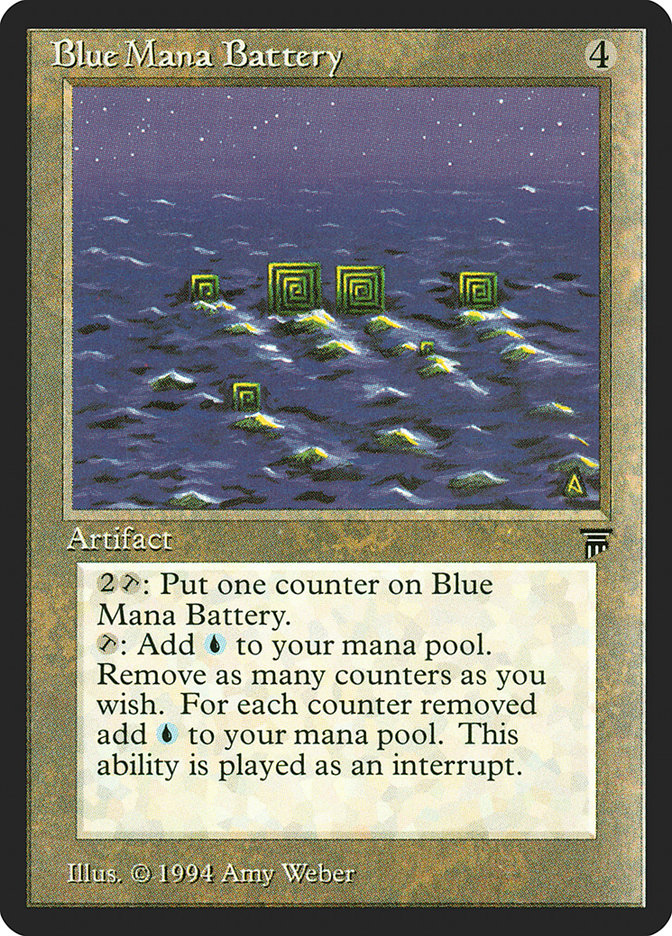 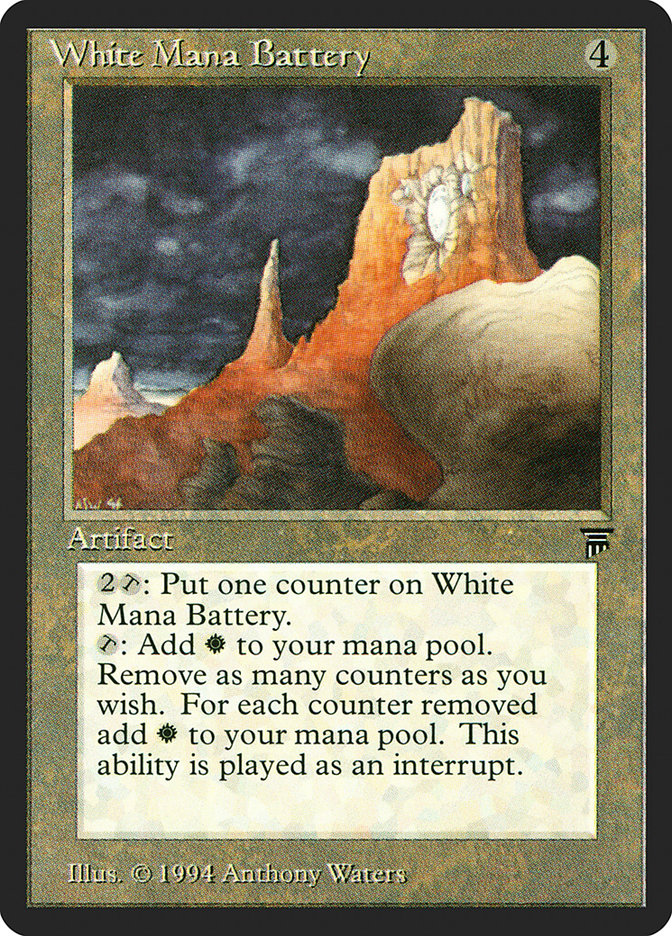 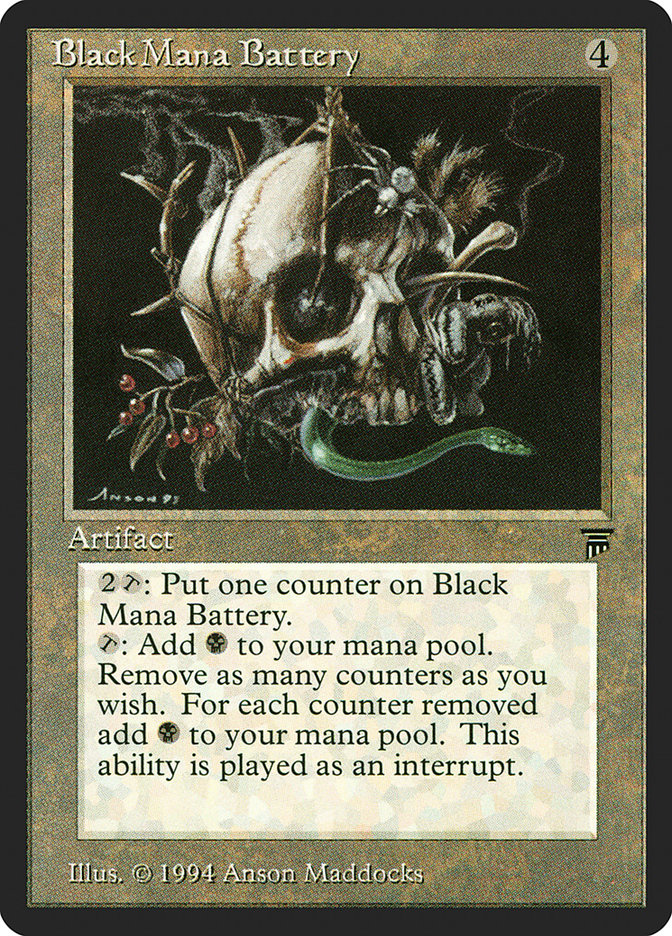 Playing with the Mana Batterys again made me realize that they are actually pretty reasonable Magic cards in general. I will almost certainly be dusting off my Legends copies for further Commander play in the future!

So Commander 1996 gave me the itch to build an actual Commander deck to play some casual Magic with over Christmas break.

My problem was that I didn’t really know what to build. Normally when I play Commander, I just build a broken Esper deck that can’t possibly lose a game and play for a day with it until I get bored and then put my cards away.

My goal for this Commander deck was to build a deck that I could keep together for an extended period of time that met the following criteria:

5. It can’t be too good that it isn’t fun to play against casual opponents. 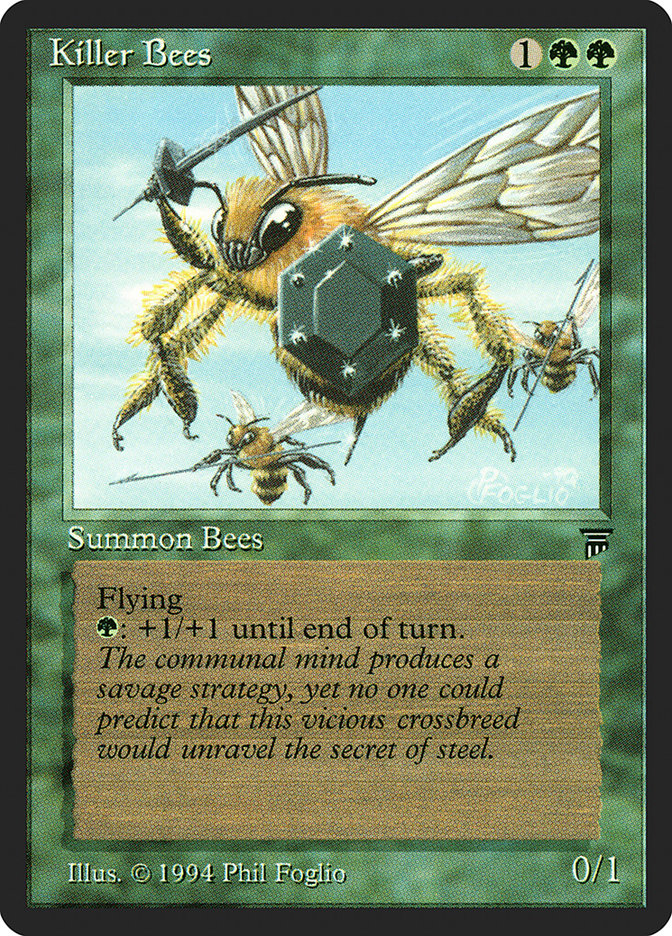 Creating a buzz over Killer Bees.

I decided that I wanted to play with my favorite card of all time from back when I was a kid. I have a sweet Legends playset of Killer Bees, so why not take the chance to dust them off and give them some play?

I settled on Insects for my theme and for my mini game with the deck to be to try to kill people with my favorite card, Killer Bees.

It also just so happened that there’s a pretty great Insect commander in Xira Arien to support my theme. I already knew that I wanted to play black and green, so getting red was just a bonus! My goals for the deck were to play with as many cards as possible that I just think are really cool in general and to stick to my Insect theme.

The Commander deck that I brewed up actually came out pretty sweet (at least I think so, which is all that ultimately matters since I will be the one playing it)!

I was able to keep my Insect theme pretty well intact while at the same time utilizing powerful cards and strategies that synergize with the Insects themselves.

All things considered, Insects do not make up a very big piece of the pie of overwhelmingly awesome Magic cards. In fact, trying to give my deck any kind of bug theme at all ended up being quite the challenge.

What I ended up doing was making a list of all of the cards that I could think of that had something to do with bugs and then trying to figure out what kinds of themes that these cards have in common.

The themes that I seemed to find running through many of the Insect creatures are infect/poisonous, deathtouch, and token generation. So I tried to find other cards that would complement these themes to supplement the overall lack of playable Insects.

The Insect cards that I found that I was really pleased to get to build around are as follows: 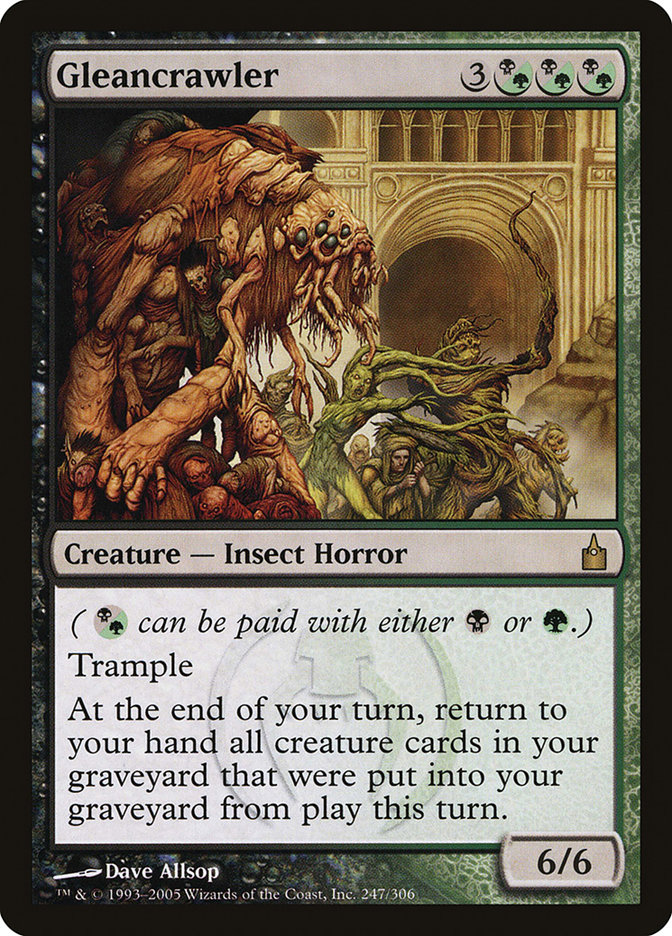 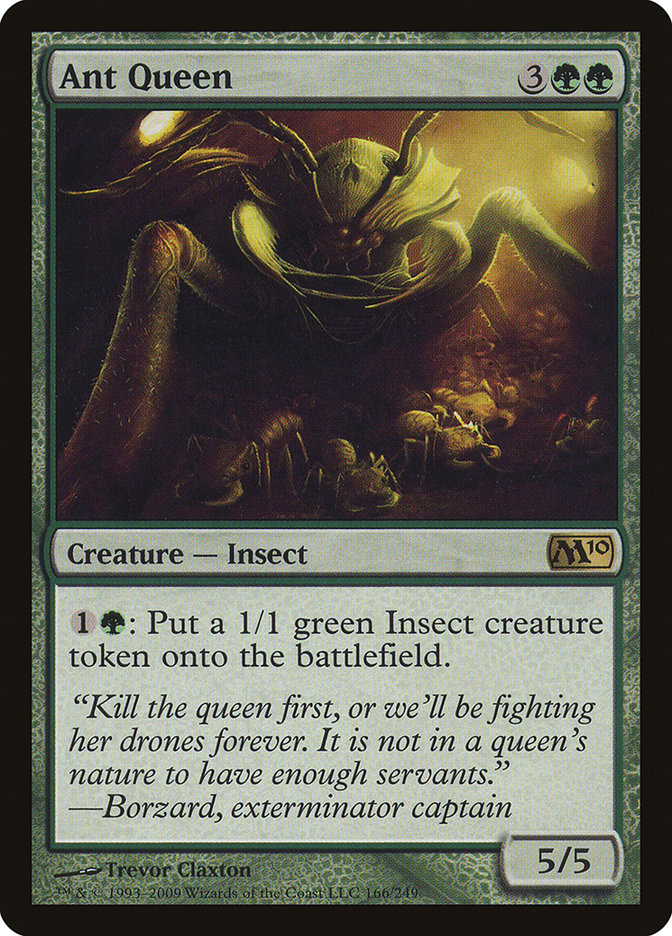 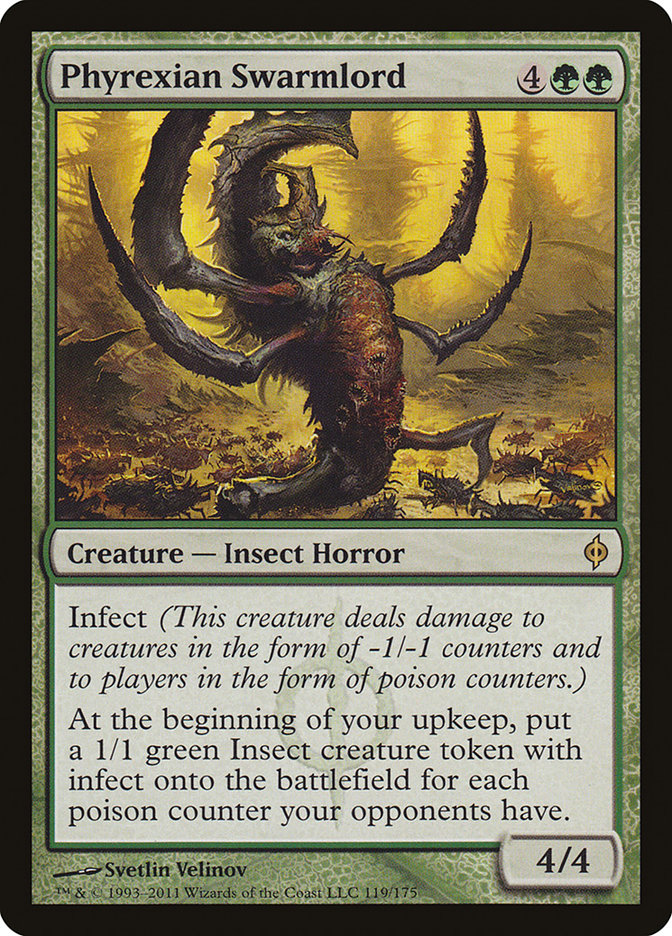 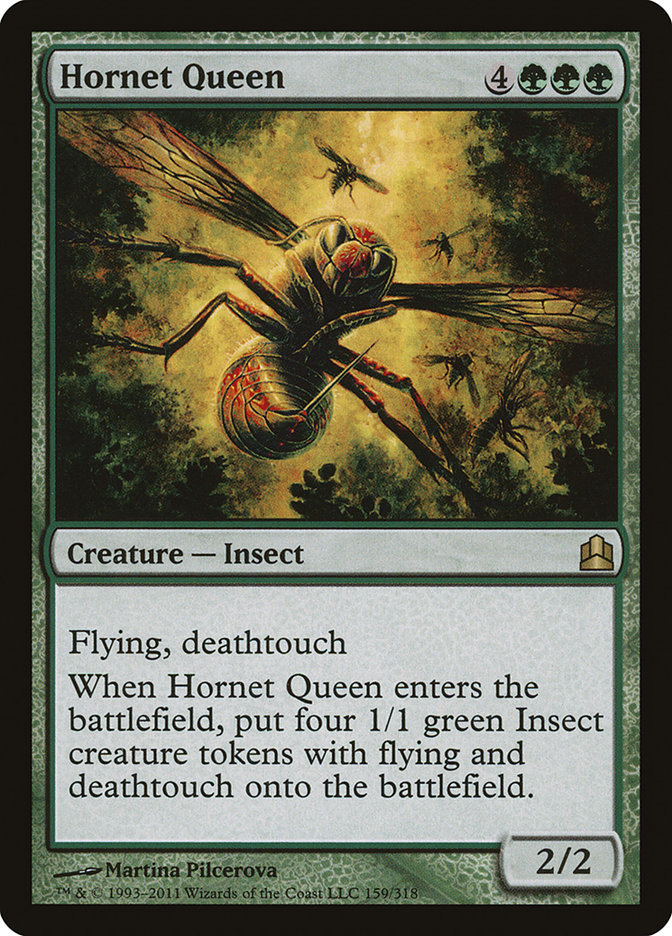 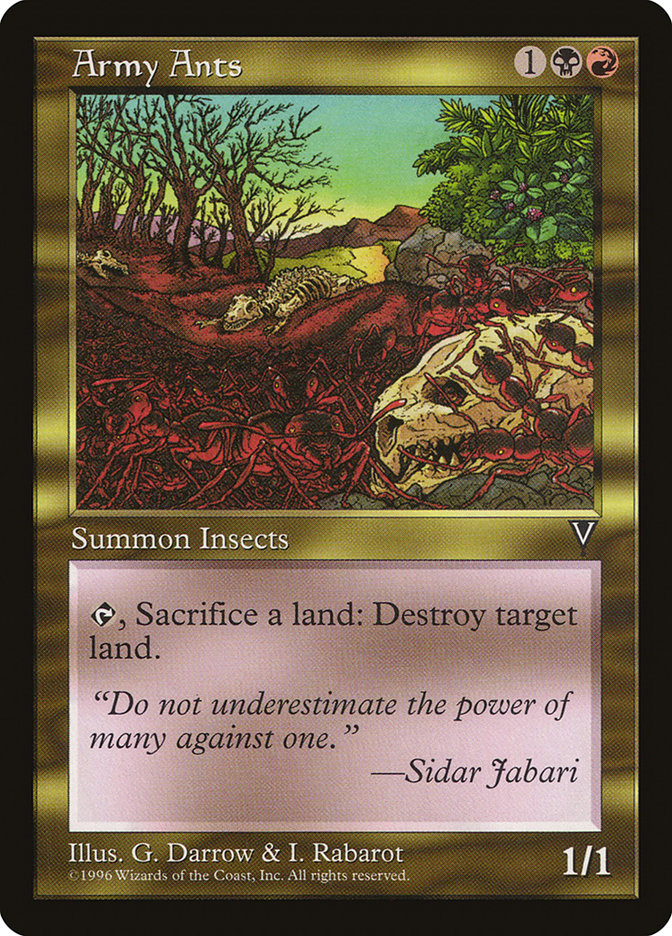 There’s a lot of token generation going on here, so obviously Skullclamp is going to be great in my deck. Therefore I played with as many ways to find it as possible.

Phyrexian Swarmlord being one of the most powerful Insect cards that I could find made me want to also focus in on some infectious ways of making him even better. 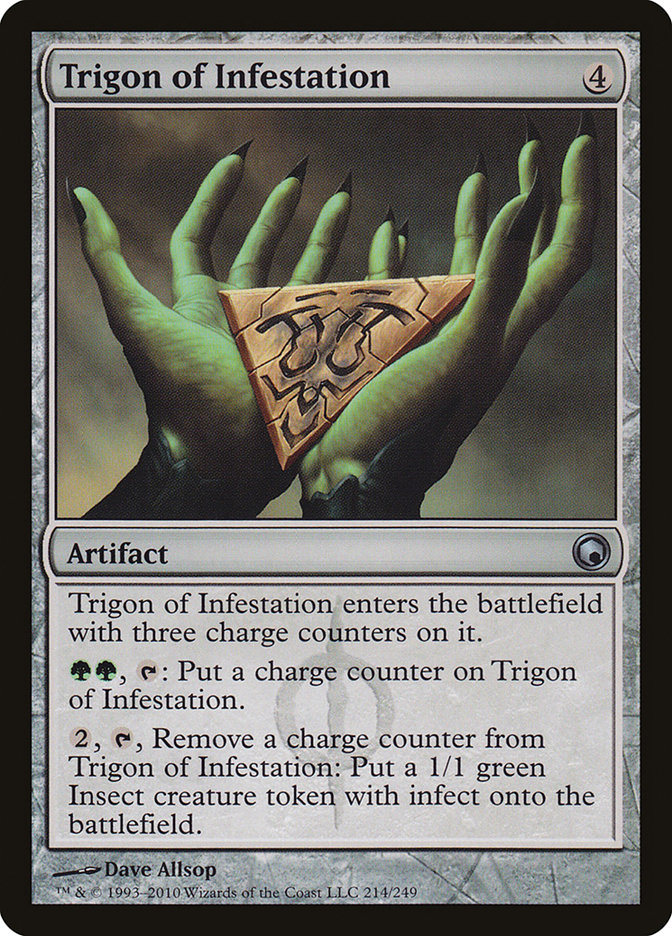 The Trigon of Infestation is a card that I loved to play with in my control decks back during Scars Limited. My fondness of the card has earned it a permanent spot in my Danger Room stack over the years, so obviously I was pretty eager to put this cool artifact into my Commander deck.

Infect is fantastic in Commander since each point of infect damage you inflict upon an opponent is basically worth four-plus actual damage!

Triumph of the Horde, Inkmoth Nexus, and Grafted Exoskeleton are support cards that I added to supplement my poisonous subtheme.

I am also a big fan of playing with really good cards, especially the good ones that I have lots of experience and memories playing with. 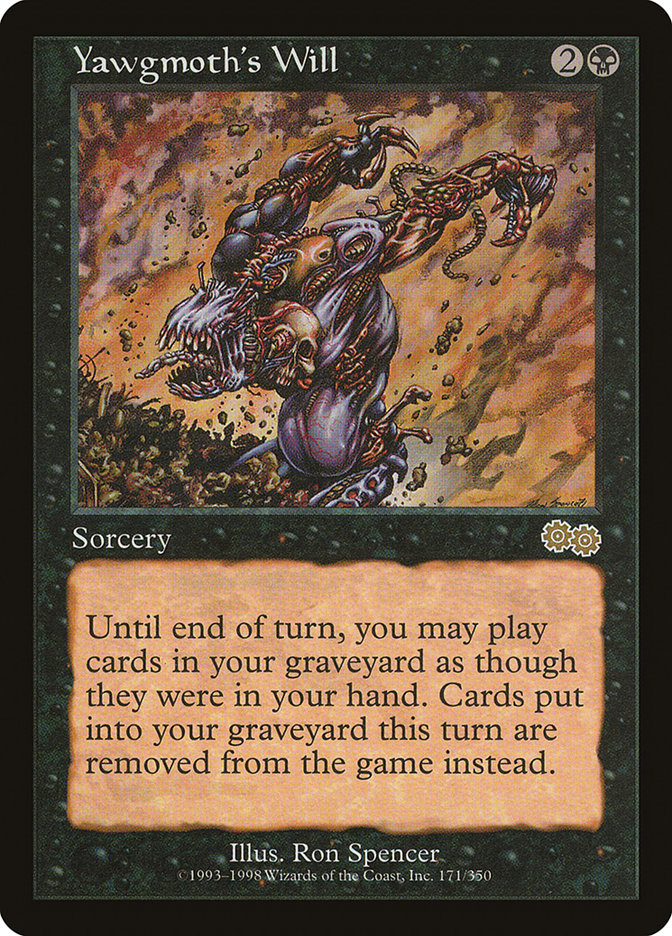 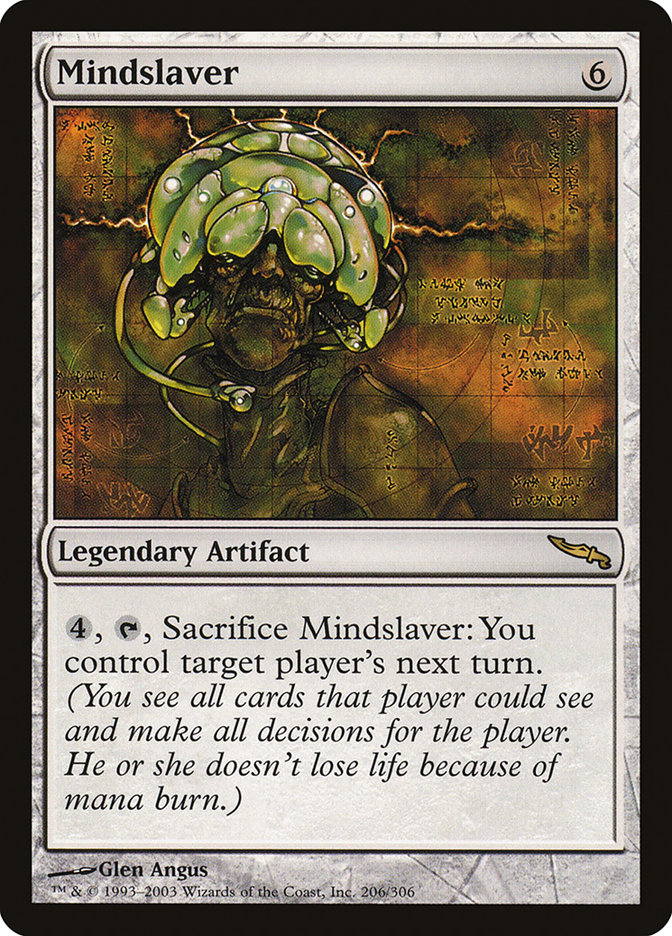 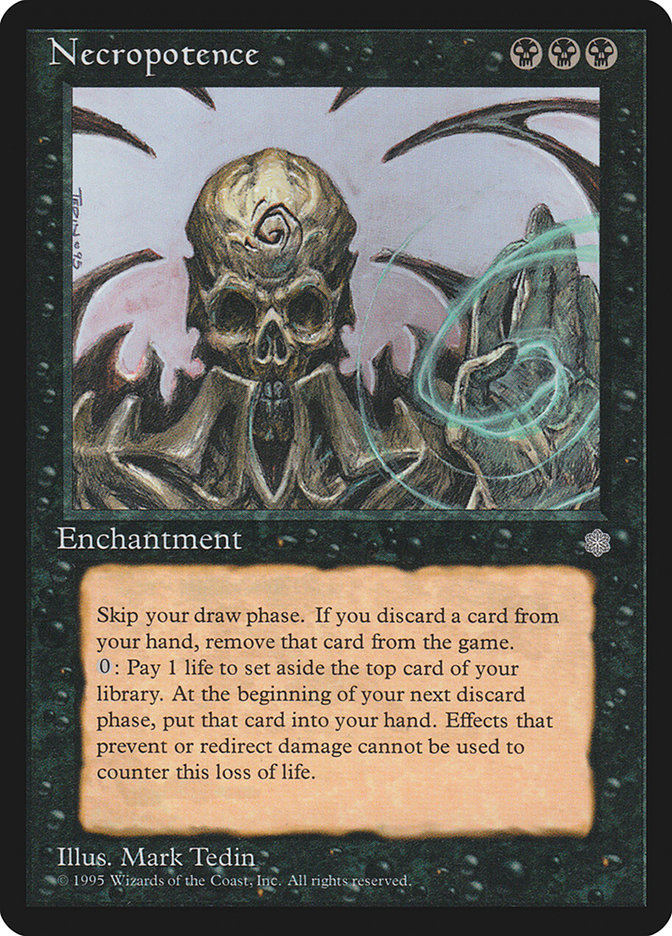 I have some history with these cards.

I would like to wish everybody a very happy holiday season and good luck in 2014!

Remember to have some fun over the break. I know that I’ll be having a blast taking on all challengers with my sweet new Insect Commander deck.

Brew something cool for the new year!