We’re here! The Sweet Sixteen of the Battle of the Blocks starts right now, and I’m super excited to continue talking about the best sets in the history of Magic. There were some notable knockouts in the earlier rounds, such as Odyssey block falling to the Magic core sets, but with the bye rounds over we can talk about the cream of the crop when it comes to this competition. This round pits Lorwyn-Shadowmoor block versus Alpha-Revised, the block grounded in classic British folklore versus the block that started Magic. Alpha-Revised already stomped through Fourth-Tenth Edition with its superior flavor and amazing staples. It now looks to take a dominating position in this contest by grabbing a win from the exquisite Lorwyn-Shadowmoor block.

Lorwyn-Shadowmoor block was split into four different sets. Lorwyn and Morningtide comprised the first half of the block and featured the sunny side of the British folklore theme, while Shadowmoor and Eventide were the second part and turned the setting from blissful morning to eternal night. Lorwyn block ushered in one of the most extreme changes to the Magic: The Gathering brand with the printing of the original planeswalkers. Although underwhelming in Commander, this new card type showcased a dedication to reinventing the brand and brought a new avenue for card design.

Lorwyn block also introduced the tribal card type, operating in this block as an additional way to introduce flavor into the set and as a functional method to have champion and tribal searches work. This block brought with it some great mechanics in conspire, retrace, evoke, and persist as well as some lesser mechanics in champion, clash, tribal, persist, wither, evoke, and prowl. For this battle Lorwyn and Shadowmoor will be lumped together as a single block even though they are both technically mini blocks.

With this being the start of the Sweet Sixteen of Battle Of The Blocks, we should quickly go back over the bracket and check out the awesome matchups coming up! 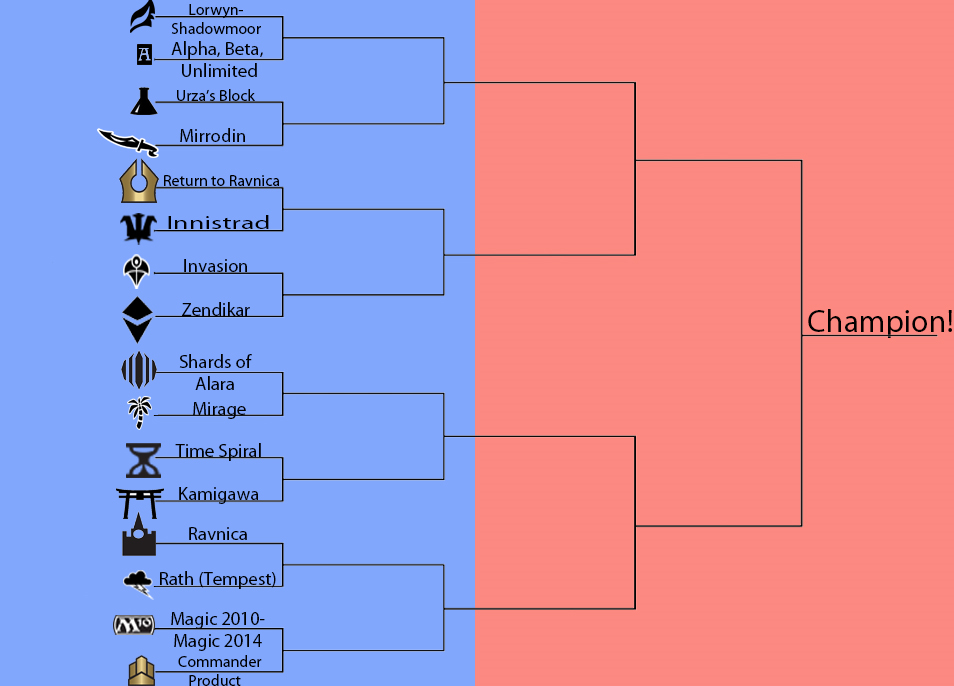 Personally, this is my favorite matchup—the first cards from Magic going up against my favorite for the competition. Remember, these battles are to decide which block contributed the most to Commander, not the best block in all of Magic. They will be compared in the usual five categories: Staples, Commanders, Strategies, Flavor, and The Bad.

Lorwyn-Shadowmoor block is absolutely filled with cards that have become permanent fixtures of the Commander metagame. With the current state of Commander being so focused on the graveyard, Reveillark is heavily played in any white-based deck. It fits in both reanimation- and flicker-based decks as well as in many five-color good stuff decks as a down right powerful card.

Mulldrifter is great off of evoke or played on 5. It sneaks into RUG good stuff decks, U/B control decks, blink decks, reanimation strategies, and, well, anything with blue. I review Commander decks commonly on my stream, and every single blue deck I see or play against either online or in the wild has Mulldrifter.

Oblivion Ring has been a catchall of the format for years, and the vivid lands are a way to help complex mana bases without having to spend hundreds of dollars. The last card I really want to mention here is Door of Destinies. Door of Destinies is one of the greatest tribal enablers printed and reached five dollars on the secondary market before its reprinting. There are many cards I could place in the five spot for Lorwyn-Shadowmoor block, like the cycle of Lieges for each color pair or the cycle of tribal lords, but I feel that Door of Destinies fits better in this slot due to its impact and colorless mana cost.

For blocks we’re revisiting like this one, the Staples section will be dedicated to cards that didn’t make it into this section the first time. Demonic Tutor is a card that should have immediately been put on the staples list. It is one of the strongest tutor effects ever printed and has seen heavy play in Commander due to its low mana cost and impactful ability. Regrowth follows right behind Demonic Tutor as a cost-efficient way to execute a powerful effect. One of the reasons Alpha block is so good at creating staples stems from the unrestricted design space offered to the original designers of the game. Similar to the lax restrictions found in the Magic core sets, Alpha thrives on effects that would cost much more if printed today.

This category is much closer than it seems. Lorwyn’s prevalence in the current format is tied to its creation of the original planeswalkers as well as fantastic enters-the-battlefield creatures that don’t have an equal in Alpha-Revised. Yet the original sets have cards like Demonic Tutor, Sol Ring, and Wrath of God in them. Alpha-Revised wins by a hair.

This is where Alpha-Revised falters. The mission of Battle Of The Blocks is to decide which block is best for Commander, not the best block ever. The simple fact is that Alpha-Revised lacks legendary creatures, which is a tremendous strike against it. Last match it received a semi-free pass due to going up against Fourth-Tenth Edition and its lack of commanders outside of Tenth Edition. It’s easy to pull out a win when the only thing to overcome is Squee, Goblin Nabob. 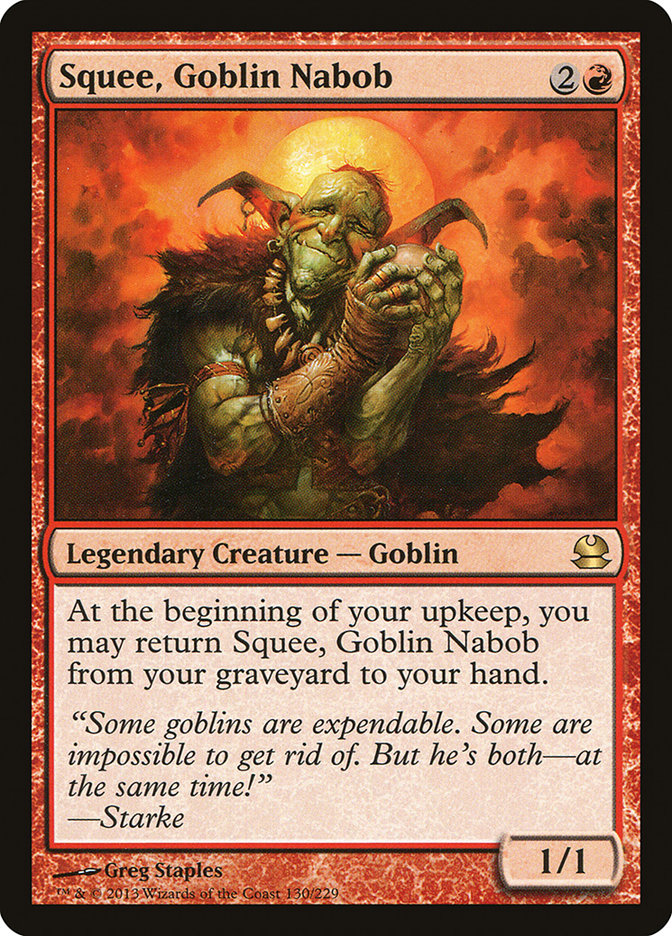 Lorwyn-Shadowmoor block is rife with great commanders. Doran, the Siege Tower is a perfect commander for the format because his amazing design leads to good top-down decks built around him. The powerful legend can become the king of the Treefolk, be put into a grindy Rock shell, or even be made into a toughness-boosting Voltron commander. Brion Stoutarm is the perfect general for a steal-and-throw deck due to his activated ability making his synergy with Threaten effects a slam-dunk (not to mention how well he works in a R/W Giant or a Boros Aggro deck that prioritizes life gain with cards like Searing Meditation).

From Shadowmoor, Sygg, River Cutthroat is a common Dimir Aggro general, creating an archetype that thrives off of dealing small amounts of damage over multiple turns to take out opponents with overwhelming card advantage. Lorwyn-Shadowmoor block has even more great commanders with build-around capabilities like Reaper King and Wort, the Raidmother, but this category is already won.

Lorwyn-Shadowmoor block takes this section in a huge no contest.

Which brings up the important Morningtide Banneret cycle that supported both a specific class and tribe like the key Goblins, Elementals, and Soldiers tribes and classes. Ever since Lorwyn-Shadowmoor block, tribes that need a few extra bodies have been able rely on the Changelings to fill out their ranks and bring along some key abilities. Cards like Chameleon Colossus, Mirror Entity, and unofficial Sliver Amoeboid Changeling fill the last 99 cards of unusual tribal Commander decks. 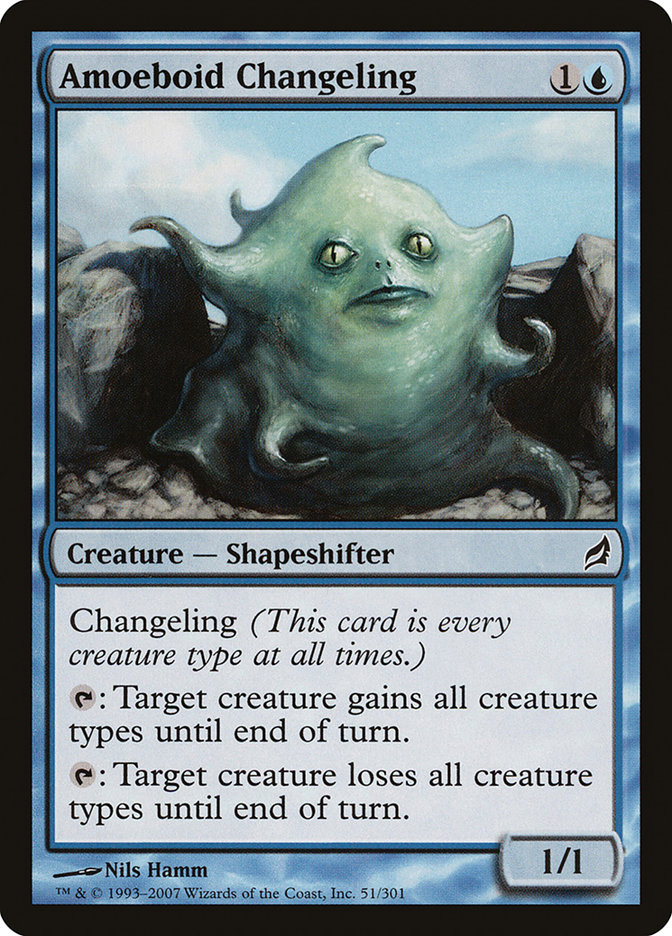 Alpha-Revised started tribal in 1993 with the original Goblin King, Zombie Master, and Lord of Atlantis each paving the way for the tribal decks that soon followed. But this section isn’t all about tribal strategies. Alpha-Revised also brought Howling Mine for painful wheel decks and group-hug decks. Hurricane and Earthquake find their first printings in Alpha and are now staples in big red and big green decks as great finishers, while Gauntlet of Might and Mana Flare are the original cards used to power up those big X spells—both of which also hail from these first editions. Fork effects started in Alpha with the original spell Fork, and what would pillow-fort decks be without a nice Forcefield or Meekstone?

The thing is that Lorwyn doesn’t stop at tribal. It just keeps going. Gilder Bairn, Rings of Brighthearth, and Thousand-Year Elixir are needed cogs for the U/G Commander decks that focus on +1/+1 counters and tap effects. Stonehewer Giant is as important as Stoneforge Mystic for Equipment-based decks, Makeshift Mannequin and Puppeteer Clique both push reanimation strategies over the top, and Flickerwisp and Mistmeadow Witch are immovable parts of U/W Flicker decks.

Even if Alpha started some of these archetypes, it can’t match the amount of support Commander has received from Lorwyn-Shadowmoor block for odd strategies.

Lorwyn was the first full set to embrace true British folklore flavor. Without a human in sight, the eternal day of Lorwyn coupled with the constant night of Shadowmoor brought players to a realm where goblins, treefolk, and kithkin told the story. The flavor from this set flows out through cards like Galepowder Mage that showcase its odd inhabitants in a way that are easy to understand and deliver the flavor of the setting.

The only mark against the flavor falls in the changelings and elementals. What in the world is a Mulldrifter? Can anyone understand what’s going on in Woodland Changeling? When staples like Phyrexian Arena and Kodama’s Reach get played, the ability is tied in with art and tells a story while performing an important ability. Cards like Shriekmaw take a hit because they tell more about the setting than the card.

Alpha-Revised skates right by this problem by showcasing evocative abilities with great art and powerful card names. Birds of Paradise is birds of paradise; Wrath of God is the wrath of god. The stories are simple and powerful, allowing for splashy plays to feel bigger than they would if it were a card like Hallowed Burial.

Alpha-Revised take this section by telling a story, not just a setting.

Lorwyn-Shadowmoor block brought Painter’s Servant to the format, but that card is banned due to its interaction with Grindstone more than anything else. Both Gaddock Teeg and Maralen of the Mornsong are commanders that people dislike playing against—one for being a great griefer general and the other for being an easily interruptible combo deck. Additionally, some notable combo enablers like the Kiki-Jiki, Mirror Breaker staple Thornbite Staff and the easily abusable Enchanted Evening come from this block. Yet these cards have not actively hurt the format. Instead they are utilized in the same way a card like Intruder Alarm or Mind Over Matter is abused. These cards aren’t negative additions to the format; they are cards that can be used negatively.

The only bad card from Alpha-Revised is Armageddon and the entire Legacy ban list, but those won’t be included in this section because that would be quite silly. The reason why Armageddon is reviled in Commander is because it prevents people from playing their deck. Commander is a format where people can spend multiple hours selecting and cutting cards to make a deck that is unique and personal to them. When a card like Armageddon gets cast, it ruins this experience and prevents a player from playing the deck they set out to play by destroying a resource that can be counted on to function throughout the game. Armageddon is a definite detraction to the format and is entirely unfun to play against.

Lorwyn-Shadowmoor wins this section by not printing Armageddon.

Join us next week as Urza’s Block fights head to head with Mirrodin block to see which one can make it into the Elite Eight and challenge Lorwyn-Shadowmoor block for a place in the Final Four! I can’t wait to see the enchantment block duke it out against the artifact block; it will be a blast.

If you think I got it wrong or you have any other thoughts about this battle, feel free to let me know in the comments!