All good ideas start from unsuspecting places. Mine found its spark from a single Tweet:

Can we Reprint Lorwyn-Shadowmoor block yet? Is it not the best block…Ever? Find me a rare that isn't playable/Flavorful. Take your time.

After sending that out, I received responses from people that extolled the virtues of Ravnica block or just kept reminding me that Ashling’s Prerogative is a real card that Wizards of The Coast printed. I was incensed; could they not see how correct I was? Did they think this was a game?

Battle Of The Blocks! 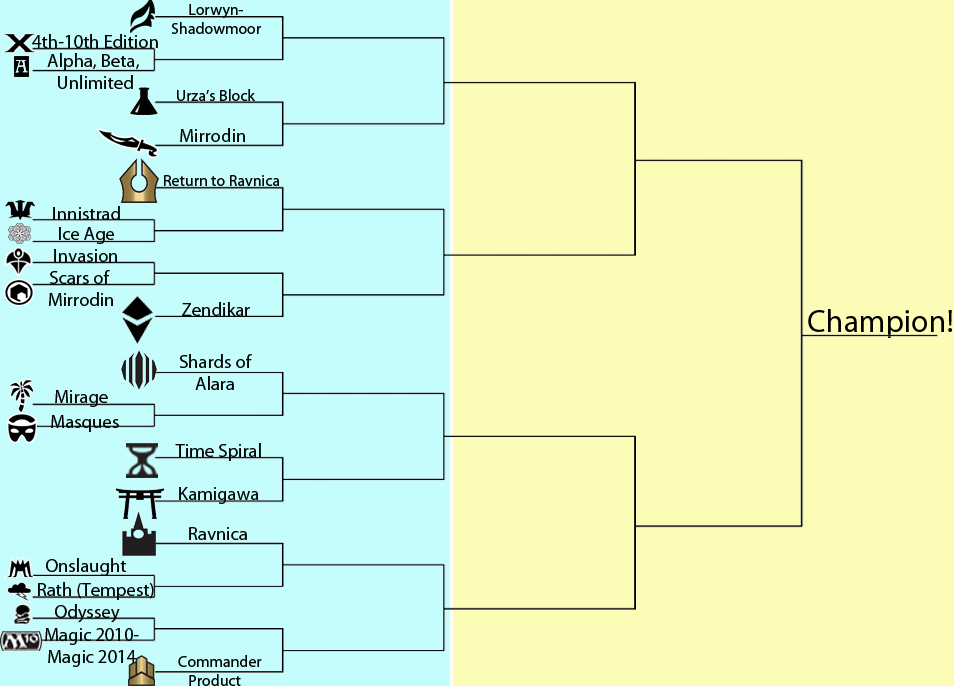 It’s a simple concept really; which block from all of Magic: The Gathering contributed the most to Commander? If you’ve ever been in a little league baseball tournament or paid attention to college basketball around the month of March, you may recognize the picture above. It’s a bracket. Taking the responses from people all over the Commander community, I tabulated what people believed were the best blocks for Commander and which were the worst. A single vote for "best" block garnered a single point, while a vote for "worst" block took a point away from the overall score. The scores were then placed in ascending order to create the seeding for this bracket. You may notice a lack of the Commander product in the polling options; this was an oversight on my behalf, but because it contributed so much to the Commander format, it was given a top seed. 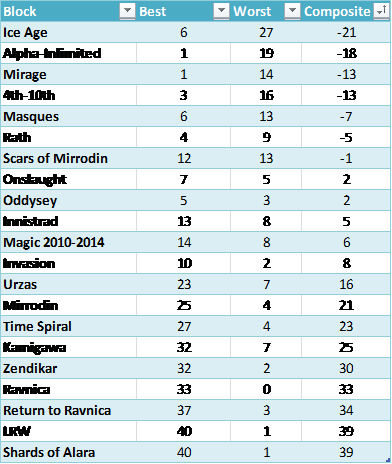 Each block will be scored on five very important principles in order to determine how much they have attributed to Commander and how much they have taken away. These are comparative rankings. Although a block may demolish its opponent in the first round, don’t just assume they will breeze through the next. This will be a close fight, with more cardboard hearts cut out than a second grade class does on Valentine’s Day. It’ll be brutal. Well, as brutal as an article about comparing card sets can be. Let’s begin!

No one can say that the original sets, Alpha–Unlimited, weren’t important for the growth of Magic. They started the damn thing! But for the purposes of the best casual format in the game, the impact from the original sets is a tad underwhelming. The cards are old and hard to come by; it is rather hard to convince someone to pay $5 for a Vesuvan Doppelganger when they can pay $2 and grab a Vesuvan Shapeshifter. Additionally, the power levels of the cards in the original sets are all out of whack; this is a set where a cycle of cards included both Healing Salve and Ancestral Recall. Yet the wonkiness and unruliness of the first sets are what give them their charm. These are sets where green had direct damage and blue cards pinged, and that may be its greatest strength. Nowhere else in Magic can you find such silly cards as Life Force or such utterly ridiculous cards as Stasis.

Fourth–Tenth Edition were the original sets that reprinted cards in order to add them to the current Standard pool. They allowed for important cards to be readily available to the masses and are one of the only ways people can pick up expensive spells on the cheap. In the same way people are excited about Modern Masters reprinting cards to reduce the prices of staple cards, the core sets did it before it was cool. Without them, we wouldn’t be able to get our hands on key cards like Evacuation, Equilibrium, or Bribery without forking over $50, and for that we are thankful.

Let’s get down to business. Each set will be judged in five categories: Commanders, Staples, Flavor, Strategies, and The Bad. Each category will be used to compare the block’s impact on the Commander format. While the Commanders category may be self-explanatory, the other categories deserve a small description.

The Staples category judges what Commander staples the set either brought to the game or made more readily available for those that wanted to play with them. The Flavor category is simply which cards the set brought to Commander that enhance the flavor of the game. Commander wouldn’t be the same without its Wild Ricochets or Guided Passages, and the sets that brought us cards like Ebon Praetor need to be given respect. Strategies focuses on linear tactics that each set brought to Commander and how it has been influenced by that set. An example is the Scarecrow decks that popped up after Shadowmoor or the tribal Ally decks from Zendikar. Bringing new strategies to Commander is just as important as bringing cool singular cards. This may be the only place where Soulshift is talked about in a positive light.

Finally, The Bad is what led so many people to vote for some of the most popular blocks of all time as the worst blocks for Commander. The sets that gave us stinkers like Griselbrand and Worldfire will need to pay for their sins of the past.

This is an easy win for Fourth–Tenth Edition.

Have you ever looked at the cards printed in Alpha–Unlimited? Go ahead and pull up the visual spoiler real quick and tell me what you think. These sets housed some of the greatest spells ever printed, and finding Commander staples within them is an easy task. Not only are cards like Wrath of God and Animate Dead from the first sets, but the original dual lands are from Alpha as well—not to mention the first printing of Birds of Paradise, Basalt Monolith, and Clone. Now, for Commander, these cards are expensive as all get-out. Trying to nab a near mint Birds of Paradise from these original sets is hard to do without paying upward of $150. For Commander, the price is rather steep for a black-bordered mana dork. The cold hard fact is that Alpha–Unlimited printed some of the most iconic and impactful cards that Commander players sling today.

Fourth–Tenth Edition also contains some of the staples that are commonly played in Commander. Cards like the pain lands were reprinted multiple times throughout these core sets, and aforementioned cards like Evacuation and Bribery have their reduced prices due to reprinting through the original core sets. Those now overpriced cards from Alpha are currently only attainable due to constant reprinting in these sets. No one would dream of paying $20 for a Clone, but you can grab one for less than a pack of M14 due to its multiple printings throughout the core sets.

The greatest thing about Fourth–Tenth Edition was the increased availability of the cards that they brought back. Yet they didn’t print Commander powerhouses at the amazing rate that Alpha did, so Fourth–Tenth Edition loses out to Alpha–Unlimited in this very important category.

Yeah, this one isn’t close. Those original cards from Alpha were oozing with flavor. Shivan Dragon was just that—a freaking dragon—while cards like Life Force and Paralyze add so much to the seasoning in Magic that they compose the oh so cheesy crust on a great Magic souffle. Heck, this could’ve been won with a single card: 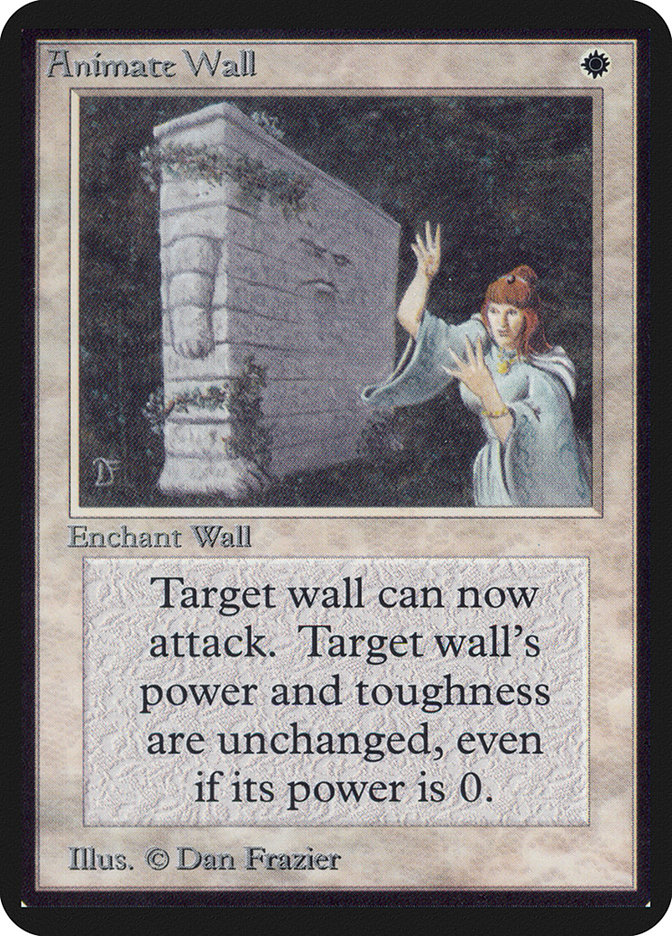 This is an overwhelming victory for Alpha–Unlimited.

This category is a little more contested because Fourth–Tenth Edition is amazing for doing one thing: reprinting hosts of lords for tribal archetypes, allowing for cheap lords and a plethora of cheaply made tribal decks. It’s a simple fact that Goblin decks don’t function without their king, and it was reprinted in each set of Fourth–Tenth Edition! Not only that but Elvish Champion, Lord of Atlantis, Field Marshall, and Lord of the Undead have all been reprinted multiple times throughout these sets.

Yet when we look at Alpha–Unlimited, something important arises—those cards were there too. Goblin King was first printed in Alpha along with original lords Lord of Atlantis and Zombie Master. But this article is about Commander in the present tense, and because of this, Fourth–Tenth Edition has a lead on the tribal strategy placement due to its constant reprinting of tribal lords in order to allow for cheap tribal strategies to be prevalent.

Besides tribal strategies, what did Fourth–Tenth Edition reprint and make more available for people to utilize? Well, there’s Teferi’s Puzzle Box, Megrim, Underworld Dreams, Howling Mine, and Zur’s Weirding for painful wheel decks. Plus Relentless Rats for Relentless Rats decks, Dreamborn Muse for mill strategies, Crucible of Worlds for the myriad of land and dredge strategies, Gravepact for all those Savra, Queen of the Golgari decks out there, and even Rolling Stones for defender decks (yes, those exist)! To put it lightly, we owe these sets for allowing these strategies to exist. Imagine paying $5 for a card like Megrim or Relentless Rats. These core set reprints are important.

Looking at Alpha–Unlimited, there are some important staples for distinct strategies still played in today’s Commander metagame nestled between the Chaos Laces and Craw Wurms. Ankh of Mishra and Armageddon are key cards for griefer decks, while Howling Mine was an Alpha original and is played in both group hug and painful wheel decks. Bad Moon is a dominating card for Mono-Black Aggro decks, Crusade for Mono-White Aggro/Tokens, and Gauntlet of Might for Mono-Red Aggro/Ramp tactics.

Even though Alpha–Unlimited began some of the most important strategies for wizards to flesh out with the next sets, the instrumental reprintings in Fourth–Tenth Edition take this category—but just barely.

This category is reserved for the negative things these blocks brought to Commander. Alpha–Unlimited birthed Armageddon in the Commander metagame, while Fourth–Tenth Edtion avoided printing anything too incriminating.

Join us next week as we take on a matchup between two top-down designed blocks, Ice Age vs. Innistrad! Will the Gothic horror flavor of Innistrad take it to victory, or will the impactful cards and legendary creatures from Ice Age allow it to prevail?