The first option is Goblin Charbelcher:

The gameplan here is simple: you have forty-one mana sources, eight cyclers, and eleven win conditions. Draw them in the right ratios, cast them in the right order, and hope they don’t have Force of Will! Sounds easy, right?

Well, yes, but this strategy has gotten a LOT worse over the last four years. In the past, you had to fight through Force of Will and Daze. This was doable, since your opponent isn’t a favorite to have Force of Will and you’re still 27% to have actual Empty the Warrens, so an opposing game plan of “open Force of Will, hold it and counter Goblin Charbelcher or Burning Wish” is going to lose over time.

Nowadays, your real enemies are: 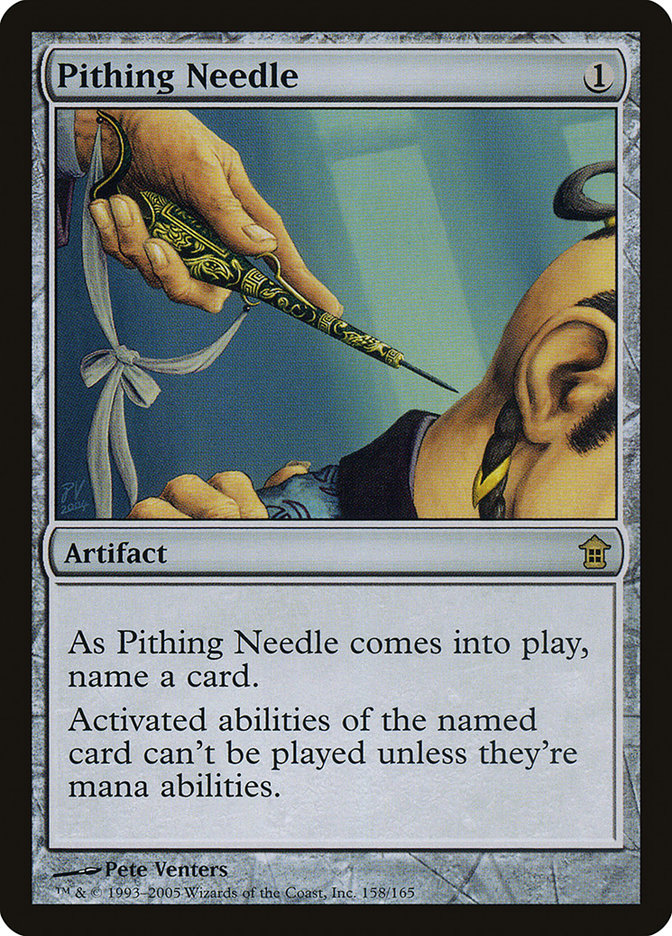 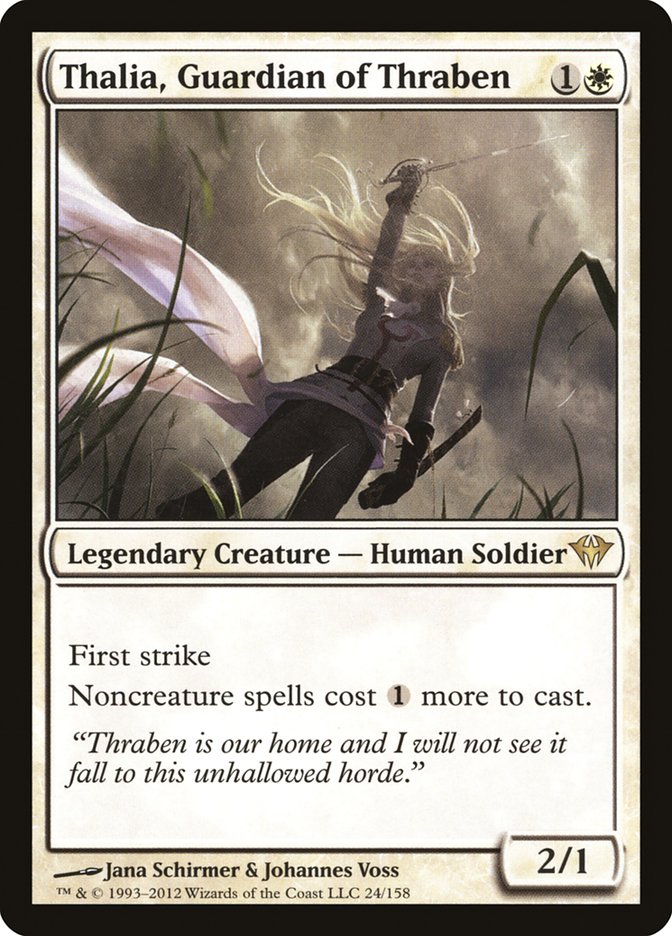 These are one- and two-mana spells that seriously mess with your game plan. Beating Daze is way, way easier than beating Spell Pierce. If you have exactly one win condition (not unlikely in a hand that you decide to keep) and get Thoughtseized, you don’t have Brainstorm or Ponder to dig through your deck to find another. All of this inexpensive interaction means that you’re worse off against a wider range of opponents. You can still do well with the deck – just this past weekend Yurien Seyssel broke through the Swiss with Burning Wish and Goblin Charbelcher – but it’s not a great bet. There are better options. Let’s keep going.

On the other end of the spectrum is Sneak and Show:

I wouldn’t recommend this to someone who isn’t familiar with the format because while it’s powerful and linear, I don’t think it’s the best Griselbrand deck in the format. The deck gives everything else in the format too much time to play Magic, whether that’s Thalia or Hymn to Tourach or Sensei’s Divining Top plus fetchlands. Once you give your opponents a third and fourth turn, you end up losing to things that you didn’t know were in the format – Ensnaring Bridge, anyone? No, far better to just have them mostly dead by turn two:

This is my pick for best high-variance combo deck of the format. There are other powerful combo decks out there – Painter, Storm, and so on – but all of them require a deep understanding of sideboard possibilities, complicated board states, and how players’ plans line up against one another. With this deck, there are relatively few lines that you can take in a given situation. Here are your typical considerations:

All three of these considerations inform choices about which large monster you want to try to put into play. Sometimes you get to choose, via Entomb or by drawing multiple monsters. Other times, you have to go with what you’ve got. In most cases, you’ll end up putting Griselbrand into play.

To go a little bit deeper:

A few more tactical notes before getting into the deck itself:

There will be more tactical notes sprinkled throughout the article, but I wanted to get some conventional wisdom out of the way up front. With that, let’s break down the decklist:

Eight cantrips (Brainstorm and Ponder), which is one more Ponder than stock lists tend to play.

Eight Reanimates/Exhumes, zero Animate Deads, and one Show and Tell, which is a Show and Tell less than stock lists tend to play. Yes, I cut a Show and Tell for a Ponder – getting to three mana in a fourteen-land deck is challenging, and Show and Tell is unreliable anyway because you only have seven maindeck creatures.

Eight buriers (four Entomb and four Careful Study), which is the industry standard. Note that you’ll side out some number of Careful Study in matchups where you want Show and Tell, as it’s counterproductive to your Show and Tell plan in just about every way after sideboarding – negative card economy, asks you to discard creatures, doesn’t let you choose what creature you’re going to Reanimate… it’s a bad scene.

Eight counters (four Daze and four Force of Will), which is mostly standard. Some people only play three Dazes. I think a combo deck that wants to move in on turn two or three is always in the market for Daze. It’s not like you’re worried about stranding lands in your hand – you have fourteen of them and your curve stops at two.

Two Thoughtseizes, which is a slot where people vary pretty wildly. Some folks have more, some have less. I prefer to rely more on Daze to answer their problem spells, since Thoughtseizing and seeing two cards that beat you is a miserable feeling. Dazing their Spell Pierce when they only have one land in play is much more appealing.

Seven creatures, although some people play eight maindeck and sideboard in a ninth. The breakdown goes like this:

All options have their pros and cons – I prefer two maindeck nonlegends and a fourth Griselbrand in the sideboard so that you can more reliably Show and Tell in a Griselbrand against, say, black decks that will attack your graveyard with Deathrite Shaman.

Speaking of the sideboard, let’s talk about why I like my list so much. It has a lot to do with this card: 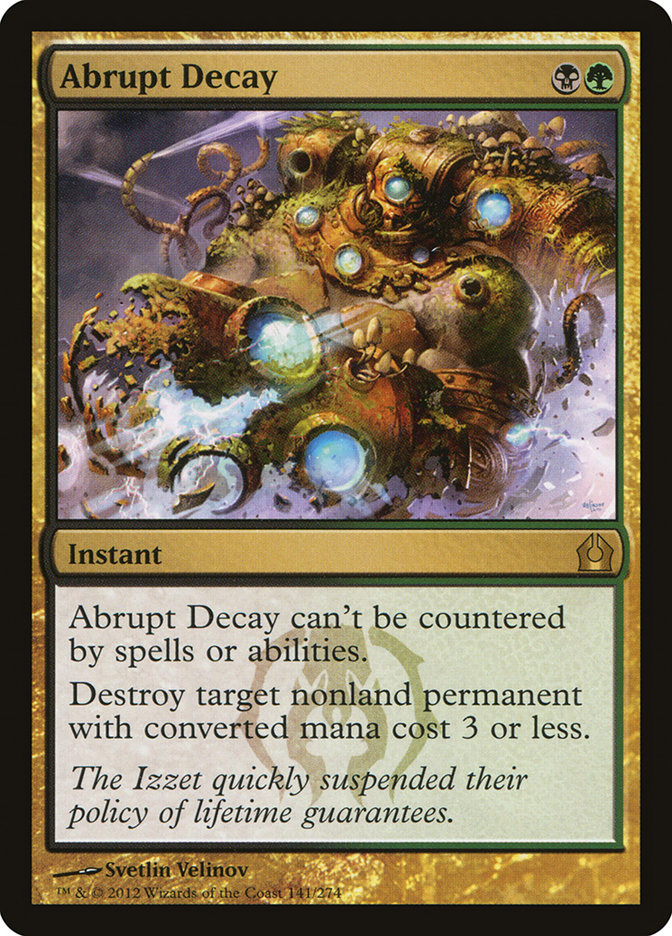 This card’s origin story requires a bit of a tangent.

So it’s Grand Prix Washington, DC (but really, Dulles Airport). I’m playing Miracles, Cedric is playing Reanimator. We’re battling during byes, and his sideboard is all over the place – Chain of Vapor, Echoing Truth, Pithing Needle, Engineered Explosives, the works. He has no idea what to sideboard in against who, what he’s supposed to do against Rest in Peace versus Deathrite Shaman versus Ensnaring Bridge versus Counterbalance. I stick a Counterbalance, he looks at his hand, and he shows me a Chain of Vapor that he brought in to fight my Rest in Peaces.

About five minutes later, he’s staring at a board of Lotus Petal and Underground Sea against my Rest in Peace when inspiration strikes, about an hour too late.

“Man, Abrupt Decay solves all of my problems – Deathrite Shaman, Rest in Peace, Grafdigger’s Cage, Counterbalance, Ensnaring Bridge… literal everything I care about gets killed by Decay. Wow, f**k me.”

So instead of going with the stock sideboard of one copy each of Pithing Needle, Engineered Explosives, Echoing Truth, and Chain of Vapor, I thought it would be better to just board in four Abrupt Decay against all of the cards you care about. You don’t have to worry about getting caught with Needle versus Cage or Chain of Vapor versus Counterbalance – just cast Abrupt Decay, target their thing, and it dies. Simple!

There are two ways to accommodate the actual casting cost of Abrupt Decay. The first is to cut the basic Island from the maindeck, since it really is very bad most of the time. The other option is to cut the pair of City of Traitors from the sideboard, since their role is to add lands to your manabase when you’re trying to cast Show and Tell. Since we don’t want to sideboard four mana-producing lands in our combo deck, it’s probably for the best if we just stick to Tropical Islands. It may end up being right to split the green sources between Tropical Island and Bayou, but let’s start with two Trops for now.

The rest of the sideboard is fairly straightforward. You want to be able to play four Show and Tells against decks with a ton of graveyard hate. You want more Thoughtseizes against opposing combo decks and decks that don’t play graveyard hate outside of Surgical Extraction (which, incidentally, often comes alongside countermagic). You want an eighth creature to pair your Show and Tells with. Your top tier of sideboard cards, therefore, is:

This leaves three slots that you can use to bias your deck against an expected metagame. If you expect a lot of white decks, for instance, you could play Massacre. Expecting a lot of Miracles, where you have to care about everything from Counterbalance to Force of Will to Rest in Peace to Terminus? Swan Song stops all of those. Want to play a ninth creature? Go ahead – you have a ton of options available to you.

As far as cutting cards goes, I recommend fitting your deck to the template that I laid out above. If you’re cutting Careful Studies, make sure to bring in more Show and Tells. Cutting disruption? Make sure you really don’t need it or you’re boarding in a superior type of disruption, whether that’s Abrupt Decay or Thoughtseize or Swan Song or Massacre. Cutting creatures? Make sure you don’t cut too far, or you won’t have anything to put into play with Show and Tell. At its core, this is a deck with fairly balanced ratios. If you’re unsure of what to do, focus on improving your deck while maintaining those ratios. If a decision is close, stick to the maindeck card – the peril of over-sideboarding with a combo deck is very real.

Instead of telling you how to sideboard, I’ll leave you a rank-ordered list of what you should focus on beating in various matchups:

Soft countermagic
Force of Will
Rest in Peace
Wasteland

Deathrite Shaman
Thoughtseize
Liliana of the Veil
Force of Will
Daze

Force of Will
Jace, the Mind Sculptor
Terminus
Counterbalance
Rest in Peace
Karakas

If you end up playing this at the Invitational, I encourage you to experiment with the last three sideboard slots. Check back tomorrow for videos with my Deathblade deck from Monday, and regardless of what you end up playing in Charlotte, I wish you the best of luck.